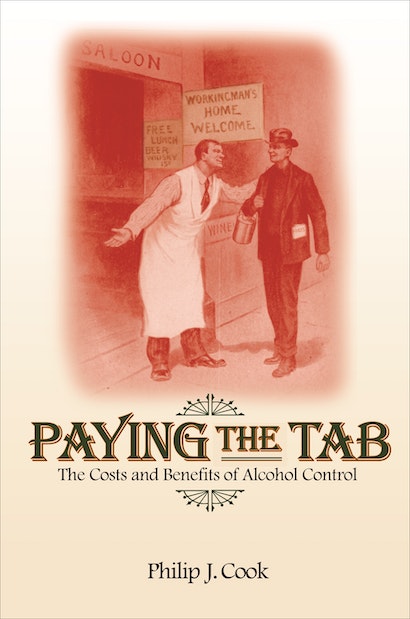 What drug provides Americans with the greatest pleasure and the greatest pain? The answer, hands down, is alcohol. The pain comes not only from drunk driving and lost lives but also addiction, family strife, crime, violence, poor health, and squandered human potential. Young and old, drinkers and abstainers alike, all are affected. Every American is paying for alcohol abuse.

Paying the Tab, the first comprehensive analysis of this complex policy issue, calls for broadening our approach to curbing destructive drinking. Over the last few decades, efforts to reduce the societal costs — curbing youth drinking and cracking down on drunk driving — have been somewhat effective, but woefully incomplete. In fact, American policymakers have ignored the influence of the supply side of the equation. Beer and liquor are far cheaper and more readily available today than in the 1950s and 1960s.


Philip Cook’s well-researched and engaging account chronicles the history of our attempts to “legislate morality,” the overlooked lessons from Prohibition, and the rise of Alcoholics Anonymous. He provides a thorough account of the scientific evidence that has accumulated over the last twenty-five years of economic and public-health research, which demonstrates that higher alcohol excise taxes and other supply restrictions are effective and underutilized policy tools that can cut abuse while preserving the pleasures of moderate consumption. Paying the Tab makes a powerful case for a policy course correction. Alcohol is too cheap, and it’s costing all of us.

Philip J. Cook is professor of public policy and economics at Duke University and former director of the university's Sanford Institute of Public Policy. His books include Gun Violence, The Winner-Take-All Society, and Selling Hope.

"A wonderful little book. . . . Draws on history, political philosophy and straight economics to point out that higher alcohol taxes would fit squarely in the American tradition."—David Leonhardt, New York Times

"As laws against smoking and drugs become more draconian, the relative regulatory neglect of alcohol remains a mystery. Much of this mystery—at least in the US context—has recently been dispelled in Paying the Tab, a gem of social science by the Duke University economist Philip Cook.... Mr. Cook's original and very literary book shows how certain principles of markets and regulation break down when a cherished commodity happens to be a mind-altering (and judgment-impairing) drug."—Christopher Caldwell, Financial Times

"As one of the nation's leading public policy scholars, Cook brings his substantial background in applied economics research to bear on the topic of alcohol policy. In the process, he presents a first-rate example of how to approach a controversial social issue using economic reasoning. Ultimately arguing in favor of enhanced control (but far short of prohibition) to reduce the incidence of drinking, Cook does not reach this conclusion casually. Instead, he considers a full range of costs and benefits of alcohol control policy, including the enjoyment moderate drinking brings to many people...Cook provides the reader with an accessible, up-to-date treatise that is essential reading for anyone interested in social policy relating to alcohol control. Paying the Tab should be on every public policy professor's reading list."—H. Winter, Choice

"In his book Paying the Tab, Philip Cook presents a comprehensive in-depth analysis of this complex policy issue. The book includes a review of the history of alcohol control in the United States, determines the evidence of its effectiveness, and provides an assessment of the proven policy options intended to curb alcohol use. I highly recommend this book to anyone who seeks to understand the effect of alcohol control policies in the United States. It is a must-read for anyone involved in legislative efforts to implement and strengthen such policies."—Bernd Wollschlaeger, Journal of the American Medical Association

"Paying the Tab offers a wide-ranging historical and social scientific perspective on alcohol in the United States and argues that more must be done to control the consumption of alcohol."—Jennifer Prah Ruger, Ph.D., New England Journal of Medicine

"Philip Cook does not offer us an economic history here, but his book should still be of interest to American economic historians and anyone interested in addiction, alcohol and related problems. He ably reviews and dissects an extensive literature to make the case for additional alcohol control policies."—Mark Thornton, EH.Net

"Philip Cook's book, Paying the Tab, is an excellent book for academics, policy analysts, and graduate students to use as a primary source on U.S. alcohol policy. . . . Cook sets precedence for all other authors who write on substance abuse policy should follow. He provides both an in-depth analysis of one drug by examining it through historical, economic and social viewpoints."—Dwight Vick, International Journal of Drug Policy

"There is a vast literature on the illicit drugs, a large literature on nicotine, and nothing up-to-date and authoritative on the second most deadly, and arguably the most damaging, alcohol. Phil Cook, with a modesty and understatement that inspire trust, explores the options for reducing the harms, allowing the benefits, and respecting personal liberty. This is a masterly combination of analysis and evidence. It is also beautifully written."—Thomas C. Schelling, Nobel Prize-winning economist

"The war on tobacco was won: the harms were recognized and measures taken to reduce them. In this compelling book, Philip Cook shows that the war on alcohol, too, can be won if policymakers act on the overwhelming and converging evidence that simple measures can reduce the short-term and long-term harms caused by drinking. He brings order to a highly complicated set of causal issues by telling us what may be true, what is probably true, and what is indisputably true; and he shows how large gains can be made simply by taking account of the last set of facts."—Jon Elster, Columbia University

"This book contains the most thorough and penetrating analysis of alcohol-control policy to date. It is certain to become a landmark in the fields of health, economic, and public policy. It is a tour de force of virtually every aspect required to formulate sound policy in this crucial area. Bravo!"—Michael Grossman, City University of New York Graduate Center

"No previous book has brought alcohol policy issues together as comprehensively and set them in context as effectively as this one does. Perhaps most impressive is its author's ability to incorporate research from many fields and to translate this evidence and the evidence from his original analyses into a book that is both highly readable and accessible to a wide audience—an audience ranging from policy researchers and policymakers to public health professionals, historians, economists, and general readers."—Frank J. Chaloupka, University of Illinois, Chicago, and director of ImpacTeen

"Paying the Tab is unequivocally a major contribution to the field. Fully covering issues on both the supply and demand side of the market, with a wealth of new data, it provides the most comprehensive discussion of alcohol control that I am aware of. Economists will benefit tremendously from its presentation of the context for our current approach to the issue, and noneconomists will welcome the clear yet complete exposition of the methods used by economists to evaluate public policy."—Sara Markowitz, Rutgers University