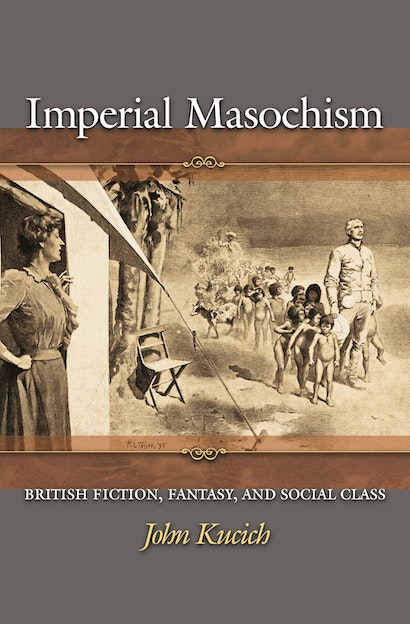 
Drawing on recent psychoanalytic theory to define masochism in terms of narcissistic fantasies of omnipotence rather than sexual perversion, the book illuminates how masochism mediates political thought of many different kinds, not simply those that represent the social order as an opposition of mastery and submission, or an eroticized drama of power differentials. Masochism was a powerful psychosocial language that enabled colonial writers to articulate judgments about imperialism and class.


The first full-length study of masochism in British colonial fiction, Imperial Masochism puts forth new readings of this literature and shows the continued relevance of psychoanalysis to historicist studies of literature and culture.

"In this elegant study, Kucich demonstrates the possibility of mutually implicating psychoanalytic theories, literary texts, and colonial discourses of race and class without losing sight of the specificity of each of these areas. In addition, he offers up a theoretically supple account of how masochistic fantasy can serve as a 'switching point' between otherwise disparate codes of thought and speech . . . [H]e shows how relational theories of masochism can be productive as a supplement to, or substitute for, Freudian ones; he reintroduces a more meticulous analysis of class into discussions of racial and sexual fantasy; and he offers illuminating readings of Rudyard Kipling, Olive Schreiner, Robert Louis Stevenson, and Joseph Conrad that clarify the stakes of current arguments over empire and over masochism. . . . This is one of the best recent books on literature, empire, and fantasy this reviewer has encountered."—J. B. Jones, Central Connecticut State University, for, Choice

"Imperial Masochism [is] an important read for scholars who are open to stepping out of the established boundaries in order to tread new paths of inquiry."—Monica Ingber, In-Spire, Journal of Law, Politics and Societies

"In his thought-provoking new book, John Kucich burnishes his reputation as one of the best critics we currently have bringing the insights of psychoanalysis to the interpretation of cultural history. . . . Imperial Masochism is an important intervention in colonial discourse studies."—Dan Bivona, Modern Philology

"If John Kucich's other books and articles have not already established him as one of today's leading and most interesting authorities on Victorian literature and culture (and I think they have), then Imperial Masochism certainly will do so. This is a sophisticated and well-written study."—Patrick Brantlinger, Indiana University

"Imperial Masochism is at once a powerfully analytic and integrative book, clinically anatomizing the generative psychosocial dynamics of masochism while demonstrating through a wealth of interpretive illustration their pervasive influence on late-Victorian literature. It is sure to provoke welcome controversy among literary critics and scholars of class and empire."—Andrew H. Miller, Indiana University