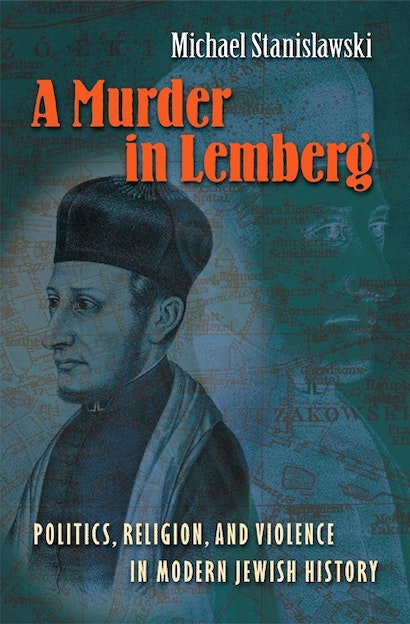 How could a Jew kill a Jew for religious and political reasons? Many people asked this question after an Orthodox Jew assassinated Israeli Prime Minister Itshak Rabin in 1995. But historian Michael Stanislawski couldn’t forget it, and he decided to find out everything he could about an obscure and much earlier event that was uncannily similar to Rabin’s murder: the 1848 killing — by an Orthodox Jew — of the Reform rabbi of Lemberg (now L’viv, Ukraine). Eventually, Stanislawski concluded that this was the first murder of a Jewish leader by a Jew since antiquity, a prelude to twentieth-century assassinations of Jews by Jews, and a turning point in Jewish history. Based on records unavailable for decades, A Murder in Lemberg is the first book about this fascinating case.


On September 6, 1848, Abraham Ber Pilpel entered the kitchen of Rabbi Abraham Kohn and his family and poured arsenic in the soup that was being prepared for their dinner. Within hours, the rabbi and his infant daughter were dead. Was Kohn’s murder part of a conservative Jewish backlash to Jewish reform and liberalization in a year of European revolution? Or was he killed simply because he threatened taxes that enriched Lemberg’s Orthodox leaders?


Vividly recreating the dramatic story of the murder, the trial that followed, and the political and religious fallout of both, Stanislawski tries to answer these questions and others. In the process, he reveals the surprising diversity of Jewish life in mid-nineteenth-century eastern Europe. Far from being uniformly Orthodox, as is often assumed, there was a struggle between Orthodox and Reform Jews that was so intense that it might have led to murder.

Michael Stanislawski is Nathan J. Miller Professor of Jewish History at Columbia University, where he also serves as Associate Director of the Institute for Israel and Jewish Studies and Chair of the Interdepartmental Program in Yiddish Studies. His books include Autobiographical Jews and Zionism and the Fin de Siècle.

"Stanislawski tells his story with a sharp eye for detail and plot, with the historical context and analysis that students of Jewish history will appreciate."—Publishers Weekly

"Beyond the sheer literary pleasure of his captivating narrative and the inherent novelty of a Galitsianer Jewish murder mystery, the author adds important insights into the complex, now vanished, world that was Jewish Galicia. . . . Michael Stanislawski has written not only an important historical morality tale about the dangers of religious extremism, but also a cautionary tale about the unforeseeable perils unleashed when governments try to force modernity, or, for that matter democracy, on a deeply traditional religious society."—Allan Nadler, Forward

"Stanislawski . . . could not have written this slim, fascinating book without having immersed himself in the municipal archives of Lviv, previously known as Lemberg."—Sheldon Kirshner, Canadian Jewish News

"A well-paces and dramatic re-examination of the Kohn murder, Murder in Lemberg is, more importantly, a rich and vivid picture of the diverse mid-19th century Jewish life in Eastern Europe, when change was unsettling traditional communities."—Jewish Book World

"In a charming and fascinating book that he has just published—A Murder in Lemberg—Stanislawski says he truly believes that this is not only a fascinating story in and of itself, but also one with abiding importance to all those interested in the modern history and the culture of the Jews, with all of its grandeur and successes, as well as its abundance of tragedy and violence...including internal violence, ultimately stretching from the assassination of Rabbi Abraham Kohn in 1848 to that of prime minister Yitzhak Rabin in 1995."—Tom Segev, Haaretz

"In this concise account, Michael Stanislawski expertly uses the crime to show that ideological changes roiling the Jewish world at the time were just as fundamental as those operating on the wider scene, and that these movements acted and reacted to each other in dangerous and unpredictable ways.... Stanislawski explains a very complex religious and political situation with commendable brevity and clarity."—Ralph Amelan, The Jerusalem Report

"[This] book is well worth reading. For specialists, it provides a little-known incident with a strong argument. For those less familiar with the history of East European Jewry, this short book may serve as an easy and interesting introduction wrapped in a murder mystery. One way or the other, Stanislawski's study is a stimulating work and deserves broad readership."—Theodore R. Weeks, American Historical Review

"A Murder in Lemberg is a comparatively short tome, yet, for the most part, it packs a powerful punch. And it is a testament to Stanislawski's skill that what might initially appear to be a parochial, if somewhat shocking, event, relevant only to its own time and place, is rendered of broader and potent meaning. . . . [T]his is a first-rate microstudy that deserves attention beyond the academy."—Sam Johnson, H-Net Reviews

"Michael Stanislawski's Murder in Lemberg is an extraordinarily interesting jewel of a book. It is a good read and an exciting story. More important, this in-depth account of an 1848 murder case and its legal aftermath allows Stanislawski to get at the heart of many important issues in nineteenth-century Eastern European Jewish history, especially the pace and extent of modernization and religious reform, the reaction against reform, and the relationship of Jews to government. It is a tour de force of analysis and insight."—Marsha Rozenblit, University of Maryland

"This well-written book uses the case of the murder of the reform rabbi of Lemberg in 1848 as a prism through which to analyze the evolving character of the Jewish community in Austrian Galicia and their relationship with the authorities and the other ethnic-religious groups there. It is somewhat reminiscent of Jan Gross's Neighbors and Helmut Walser Smith's The Butcher's Tale in that it provides the general context of the murder in a succinct and informative manner and delves into its intricate details and subsequent investigation. This makes for interesting reading and a fresh look at a region and period that are not well covered."—Omer Bartov, Brown University