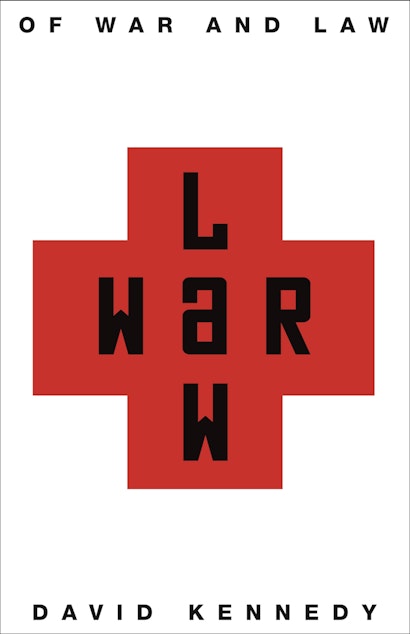 Modern war is law pursued by other means. Once a bit player in military conflict, law now shapes the institutional, logistical, and physical landscape of war. At the same time, law has become a political and ethical vocabulary for marking legitimate power and justifiable death. As a result, the battlespace is as legally regulated as the rest of modern life. In Of War and Law, David Kennedy examines this important development, retelling the history of modern war and statecraft as a tale of the changing role of law and the dramatic growth of law’s power. Not only a restraint and an ethical yardstick, law can also be a weapon — a strategic partner, a force multiplier, and an excuse for terrifying violence.


Kennedy focuses on what can go wrong when humanitarian and military planners speak the same legal language — wrong for humanitarianism, and wrong for warfare. He argues that law has beaten ploughshares into swords while encouraging the bureaucratization of strategy and leadership. A culture of rules has eroded the experience of personal decision-making and responsibility among soldiers and statesmen alike. Kennedy urges those inside and outside the military who wish to reduce the ferocity of battle to understand the new roles — and the limits — of law. Only then will we be able to revitalize our responsibility for war.

David Kennedy is Manley O. Hudson Professor of Law and Director of the European Law Research Center at Harvard Law School. He is the author of The Dark Sides of Virtue and coauthor of The Canon of American Legal Thought (both Princeton).

"The provocative new book, Of War and Law . . . [is] a cautionary tale of what can go wrong when military leaders and outside observers use legal language as a substitute for independent ethical thinking. According to Kennedy, the military's increasing reliance on the law creates the illusion that there is an objective way to balance civilian lives and military goals. It relieves the decider of responsibility for judgment. . . . Kennedy traces the evolving relationship of law and warfare as the boundaries between war and peace have steadily grown less distinct."—Bill Ibelle, Harvard Law Bulletin

"This powerful work by a Harvard legal scholar probes the modern transformation of warfare and the growing 'merger' of the 'professional vernaculars' of military force and law. . . . This is an original contribution to the debate about the perils of liberal democracy in an age of limited but unending war."—G. John Ikenberry, Foreign Affairs

"In this provocative and timely book, Professor David Kennedy probes the relationship between war and law, incisively unraveling two concepts that have become increasingly intertwined since the Second World War ... offering lessons for politicians and citizens alike."—Harvard Law Review

"Kennedy's [book] is an innovative and provocative assessment of the contemporary uses of the laws of war. [It] makes an utterly invaluable contribution to our understanding of the role of legal ideas in regulating, constituting and debating the use of force."—Alex J. Bellamy, International Affairs

"Kennedy is always an interesting thinker and writer and the themes he deals within this book are fascinating. . . . Kennedy's points should be studied and his effort to disentangle the web of law, war and politics should be wholeheartedly supported and furthered. In this sense, Of War and Law can be viewed as an interesting contribution to a useful and intriguing debate."—Ioannis Kalpouzos, Journal of Conflict & Security Law

"Kennedy's emphasis on ethics and politics is a welcome respite from the excesses of legal categories, all the more so coming from a humanitarian professional. Indeed, he wants to return the experience of responsibility to violent conflict—and to all participants. His thoughtful book is a laudable contribution in that direction."—Christian R. Donath, The European Legacy

"Readers who plow through this brief book will be rewarded with unique insights concerning modern law of armed conflict (LOAC). . . . This is a thoughtful and intelligent hook, with a significant point. The epilogue is particularly well-done."—Gary Solis, Journal of Military History

"That the line between war and peace has been blurred becomes more evident with each incident from Afghanistan to Iraq. But the complexity and depth of legal implications that affect policymakers and military commanders have not been understood. Kennedy's book brilliantly and deftly probes both the uncertainty and the importance of legal rules in the changed civil and military environments."—Antonia Chayes, Visiting Professor of International Politics and Law, Tufts University

"David Kennedy's elegant little essay contains a brilliant analysis of the linguistic fault lines that dominate our approach to diplomatic and military politics, and which utterly obscure the very difficult decisions that ought to be made on quite other grounds and for better reasons than adherence to unhelpful old categories. The book should be of great significance for lawyers, politicians, and military officers. It should become the prism through which the issues arising out of 'humanitarian intervention' are seen and discussed."—Thomas Franck, New York University School of Law

Of War and Law is a very thoughtful and fresh analysis of modern law and modern war. David Kennedy argues that the merger of law, politics, and war is a fact of contemporary society. He believes, and I happen to agree, that the more we accept this reality, the more productively we can begin to understand how law might be useful in achieving the humanitarian purposes for which it was principally designed."—Maj. Gen. Charles J. Dunlap Jr., U.S. Air Force