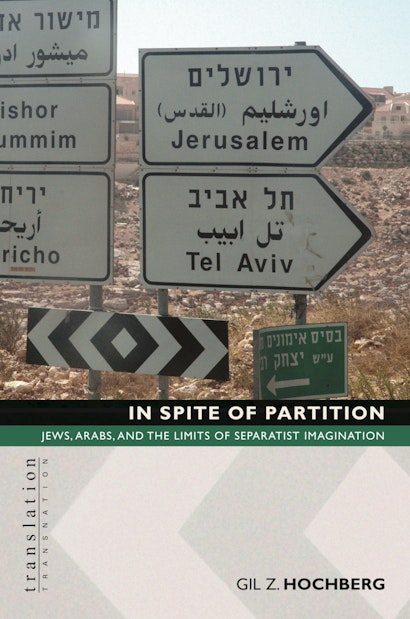 Partition — the idea of separating Jews and Arabs along ethnic or national lines — is a legacy at least as old as the Zionist-Palestinian conflict. Challenging the widespread “separatist imagination” behind partition, Gil Hochberg demonstrates the ways in which works of contemporary Jewish and Arab literature reject simple notions of separatism and instead display complex configurations of identity that emphasize the presence of alterity within the self — the Jew within the Arab, and the Arab within the Jew. In Spite of Partition examines Hebrew, Arabic, and French works that are largely unknown to English readers to reveal how, far from being independent, the signifiers “Jew” and “Arab” are inseparable.


In a series of original close readings, Hochberg analyzes fascinating examples of such inseparability. In the Palestinian writer Anton Shammas’s Hebrew novel Arabesques, the Israeli and Palestinian protagonists are a “schizophrenic pair” who “have not yet decided who is the ventriloquist of whom.” And in the Moroccan Jewish writer Albert Swissa’s Hebrew novel Aqud, the Moroccan-Israeli main character’s identity is uneasily located between the “Moroccan Muslim boy he could have been” and the “Jewish Israeli boy he has become.” Other examples draw attention to the intricate linguistic proximity of Hebrew and Arabic, the historical link between the traumatic memories of the Jewish Holocaust and the Palestinian Nakbah, and the libidinal ties that bind Jews and Arabs despite, or even because of, their current animosity.

Gil Z. Hochberg is assistant professor of comparative literature at the University of California, Los Angeles.

"This is a necessary and timely book written in luminous prose. . . . In Spite of Partition offers readers contagiously exciting and productive readings that will surely stimulate future discussions, not only of the literary works themselves, but for thinking more creatively about ethnicity, identity, and shared histories and forms of belonging in this woefully unpromising first decade of the twenty-first century."—Ranen Omer-Sherman, Shofar

"This new addition is a thoughtful, well-researched, and carefully constructed argument about the nature of the relationship between Arab and Jew, in its many apparitions and configurations. As such, it is an important addition to the progressive discourse around the future, as well as the past, of Palestine."—Gil Anidjar, Journal of Palestine Studies

"Hochberg's political realism is supplemented with a specifically literary hope that reading can not only undo the effects of forgetting but expose the complex ties that bind Arab and Jew. Hochberg dares to articulate a shared history on the basis of a patient, copious, and persuasive reading of Arab and Jewish writers and critics, many of whom are not well understood by Anglophone readers. Through a disorientingly lucid, close, and provocative set of readings, she shows us that the cultural imagination has its crucial place in articulating the prospects for peace. She makes good on the claim that memory is crucial to imagining anew."—Judith Butler, University of California, Berkeley

"Hochberg's book is a poignant and rigorous demonstration of the power of literature to provide a space of cohabitation and confrontation that is an alternative to 'the logic of partition.' An important and timely intervention that will be of interest to all those who seek ways out of the impasses created by racial, cultural, religious, or political differences."—Françoise Lionnet, University of California, Los Angeles

"This book is a testimony to the healing power of literature, its capacity to resist the mutilating logic of a social and political world whose realities it refuses simply to mirror. It deserves to be read by anyone who has the courage to imagine that underlying a conflict played out on a landscape disfigured by separating barriers, hideous walls, and strangling checkpoints, there persists the quintessentially human desire to reunite what has been separated, to share, to be equal, to be in common-and even to love."—Saree Makdisi, University of California, Los Angeles

"Gil Hochberg's In Spite of Partition provides a fascinating literary context that opens new directions for discussing the relation between the signifiers 'Arab' and 'Jew.' Dedicated to a close reading of Jewish and Arab authors who are rarely discussed together and who subvert the dichotomy between Arabs and Jews, the book will interest many readers."—Amnon Raz-Krakotzkin, Ben Gurion University

"In Spite of Partition makes a seminal contribution to the study of Israel and Palestine, one that will influence the development of a number of disciplines, particularly history and comparative literature. It is extremely well written, and Hochberg has a strong command of the material."—Mark Levine, University of California, Irvine