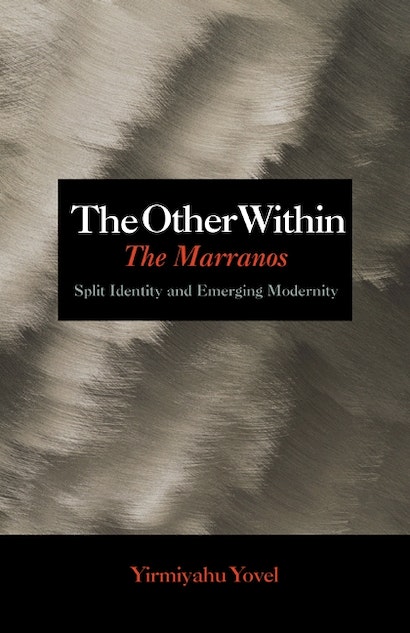 The Marranos were former Jews forced to convert to Christianity in Spain and Portugal, and their later descendents. Despite economic and some political advancement, these “Conversos” suffered social stigma and were persecuted by the Inquisition. In this unconventional history, Yirmiyahu Yovel tells their fascinating story and reflects on what it means for modern forms of identity.

He describes the Marranos as “the Other within”—people who both did and did not belong. Rejected by most Jews as renegades and by most veteran Christians as Jews with impure blood, Marranos had no definite, integral identity, Yovel argues. The “Judaizers”—Marranos who wished to remain secretly Jewish—were not actually Jews, and those Marranos who wished to assimilate were not truly integrated as Hispano-Catholics. Rather, mixing Jewish and Christian symbols and life patterns, Marranos were typically distinguished by a split identity. They also discovered the subjective mind, engaged in social and religious dissent, and demonstrated early signs of secularity and this-worldliness. In these ways, Yovel says, the Marranos anticipated and possibly helped create many central features of modern Western and Jewish experience. One of Yovel’s philosophical conclusions is that split identity—which the Inquisition persecuted and modern nationalism considers illicit—is a genuine and inevitable shape of human existence, one that deserves recognition as a basic human freedom.

Drawing on historical studies, Inquisition records, and contemporary poems, novels, treatises, and other writings, this engaging critical history of the Marrano experience is also a profound meditation on dual identities and the birth of modernity.

Yirmiyahu Yovel (1935–2018) was professor emeritus of philosophy at the Hebrew University of Jerusalem. His books include Spinoza and Other Heretics (Princeton); Kant and the Philosophy of History (Princeton); and Dark Riddle: Hegel, Nietzsche, and the Jews.

"This extremely rich and very important book is a crucial document in our attempt to understand ourselves."—Charles Taylor, author of Sources of the Self

"Do you have an identity? National, ethnic, religious, sexual? Not really? Have nothing to fear! You are a postmodern baroque subject. Your kaleidoscopic wanderings could well be the source of a new creativity, and yet one that has been in the works since . . . the Marranos. You weren't aware of it? Read Yirmiyahu Yovel's book. With an alert and inspired plume, and working at the crossroads of history, sociology, philosophy, and narration, this great expert on Spinoza reveals to specialists and nonspecialists alike that modern subjectivity was invented by Spanish Jews coerced into converting to Christianity six centuries ago. . . . By transcending historical religions, might they have created the 'philosophy of immanence'? Even to Yovel, who shakes the tree of preconceived ideas and identities, the answer comes as a surprise. And the pleasure of it is all ours."—Julia Kristeva

"Through an astonishing work of historical and cultural archaeology, Yirmiyahu Yovel recounts the lost narrative of the Marranos, Conversos, or New Christians-Jews of the Iberian peninsula who over the centuries had to convert to Christianity without, however, ever losing aspects of their Jewish heritage. This is a poignantly written work, which argues that the Marrano experience of concealing 'the Other within' is also paradigmatic for the adventures of modern subjectivity. A must-read for anyone interested in the multicultural complexities of the birth of modernity in the West!"—Seyla Benhabib, Eugene Meyer Professor of Political Science and Philosophy, Yale University

"The Other Within succeeds brilliantly in its twofold purpose. Yovel provides a gripping narrative of Marrano history, with many illuminating examples of the varieties of religious (and secular) experience that it encompassed. And he also provides a deep philosophical analysis—persuasive too!—of Marrano subjectivity, skepticism, and irony as a prefiguring of the modern mind."—Michael Walzer, professor emeritus of social science, Institute for Advanced Study

"A comprehensive, wide-ranging, lively, thoughtful, and savvy history of a fascinating and illuminating topic. Yirmiyahu Yovel brings to the study of the Marranos in Spain (and elsewhere) an impressive range of linguistic tools and a deep sympathy for his subject. He combines a philosopher's ability to provide clear distinctions between different responses to the experience of persecution and conversion with a historian's dedicated immersion in the fascinating sources he mines to tell his story. Probing beneath the surface without ever disrupting its contours, he demonstrates a finely honed sense for what is possible within given historical situations, and a powerful sensitivity to the texture of different individual experiences. His overall picture of the uncertain, shifting, multiple forms of identity fostered by the situations in which Marranos had to live, and of their connection to the larger problems of modern selfhood, should make his book of great interest to a wide variety of readers."—Jerrold Seigel, William R. Kenan, Jr., Professor of History Emeritus, New York University, and author of The Idea of the Self

"Yirmiyahu Yovel's The Other Within is an original and very innovative study of one of the most fascinating chapters in modern Jewish and European history, namely that of the Marranos—the Jews forcefully converted to Christianity in Spain and Portugal in the late medieval period, many of whom left Spain and Portugal for other places in Europe (especially Holland), the Ottoman Empire, and the Caribbean. This study presents an interesting analysis of their place in Jewish history, emphasizing their 'dual' or 'split' identity, which generated intensive cultural innovations, opening up different paths of Jewish modernity with all the ambivalences they entailed. This approach throws important light on some of the problems of modernity in general and Jewish modernity in particular, and will become a focus of many discussions."—S. N. Eisenstadt, Van Leer Jerusalem Institute