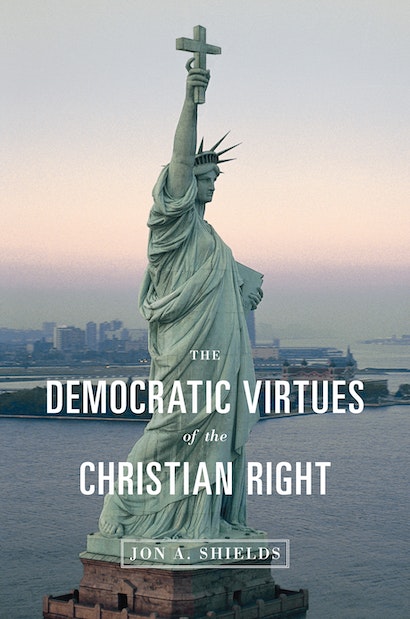 The Christian Right is frequently accused of threatening democratic values. But in The Democratic Virtues of the Christian Right, Jon Shields argues that religious conservatives have in fact dramatically increased and improved democratic participation and that they are far more civil and reasonable than is commonly believed.


Shields interviewed leaders of more than thirty Christian Right organizations, observed movement activists in six American cities, and analyzed a wide variety of survey data and movement media. His conclusions are surprising: the Christian Right has reinvigorated American politics and fulfilled New Left ideals by mobilizing a previously alienated group and by refocusing politics on the contentious ideological and moral questions that motivate citizens. Shields also finds that, largely for pragmatic reasons, the vast majority of Christian Right leaders encourage their followers to embrace deliberative norms in the public square, including civility and secular reasoning.


At the same time, Shields highlights a tension between participatory and deliberative ideals since Christian Right leaders also nurture moral passions, prejudices, and dogmas to propel their movement. Nonetheless, the Christian Right’s other democratic virtues help contain civic extremism, sharpen the thinking of activists, and raise the level and tenor of political debate for all Americans.

Jon A. Shields is assistant professor of government at Claremont McKenna College.

"Shields brings to light a wealth of new data on the Christian Right in a way that helps us better think about the historical rise of the movement, as well as its similarities to and differences from the far better scrutinized social movements of the Left. His organization of this data around the norms of deliberative and participatory democracy helps us deepen our understanding of one of the most active areas of civic engagement in the United States over the last several decades. These contributions make The Democratic Virtues of the Christian Right of use to students, scholars, and journalists alike."—Ziad Munson, Perspectives on Politics

"It is always refreshing to encounter contrarian viewpoints, especially about topics that rarely receive more than superficial treatment in the media or academe. . . . The book's middle chapters, on the relationship between the Christian Right and 'deliberative democracy,' are well worth the volume's cost. Much of Shields' analysis rests on a perceived tension between partisan mobilization and public deliberation."—John G. Turner, Books & Culture

"A remarkable new book . . . The Democratic Virtues of the Christian Right is by no means a pro-life tract. It is an excruciatingly careful study, studded with the expected graphs and statistical data—but not to the point of spoiling its readability—in the service of probing the curious permutations in contemporary political alignments."—Richard John Neuhaus, First Things

"Jon A. Shields makes a substantial contribution to the literature on the Christian right. . . . Shields should be praised for his efforts, since all too often, scholarly work in religion and politics is devoid of theory and is instead simply a superficial description of the political behavior of various religious groups. . . . Shields's book, despite some limitations, represents a major step forward in the scholarship in the Christian right. It is well written and has an engaging narrative that weaves throughout the entire book. Most importantly, the book should serve as a jumping-off point for scholars and media members to better understand the Christian right movement."—Matthew K. DeSantis, Political Science Quarterly

"The book's sophisticated argument makes it essential reading for scholars of American religion, politics, and social movements, but it is accessible enough to interest nonspecialists as well. . . . Whether or not readers agree with all of Shields's interpretations, his challenging claims about faith and politics provide a highly relevant perspective on our uncivil times."—Joseph Kip Kosek, Journal of Church and State

"This work is thought-provoking and impressive. . . . This is a strong piece of scholarship. Not everyone will agree with Shields's conclusions, but anyone interested in the American polity will be well served by carefully considering this work."—Mark D. Brewer, Review of Politics

"Among other virtues, The Democratic Virtues of the Christian Right is both careful and clear enough to interest scholars and provocative and relevant enough to engage students with little background. This is both a courageous work, and, in many ways, a classic. It deserves to start a great many arguments, and there is little doubt that it will."—Andrew Sabl, Society

"Shields reminds us that the rational-choice, interest-based model of politics dominating most political science departments treats a morally passionate politics as a distortion, even a menace. . . . Using participant-observer interviews and techniques, visiting college campuses and other sites of political action, conducting surveys and consulting other forms of empirical data . . . he finds that Christian leaders are, in fact, committed to rational argument and democratic deliberation."—Jean Bethke Elshtain, Claremont Review of Books

"For all those interested in the mingling religion and politics, Shields' book has much to teach about the American political scene and the uses of deliberative democracy by religious groups committed to precepts whose ultimate source is their God."—Nancy L. Honicker, Journal of American Studies of Turkey

"Jon Shields manages to take the moral claims of pro-life activists seriously while subjecting their movement and organizations to rigorous social scientific analysis. While hardly neglecting the media-based opportunists and zealous, sometimes violent extremists, Shields also shows how mainstream pro-life leaders have developed non-confrontational tactics and non-religious arguments to more effectively challenge pro-choice policies. He then demonstrates how such deliberative tendencies reflect the interplay of Christian values and the organizational incentives facing pro-life activists in a variety of settings. This book will certainly not please everyone, but it should remind all of us of the tensions between reason and passion that any responsible political actor must inevitably negotiate."—Peter Skerry, Boston College

"This is among the best books on the practice of deliberation in American politics, and for many readers it will also be one of the most surprising. Shields shows that antiabortion activists—far more than their pro-choice counterparts—bend over backwards to engage respectfully with opponents and promote high standards of democratic discourse. They do so both as an obligation of Christian love and as a matter of hardheaded political strategy. Liberal academics and commentators will resist his thesis but it will stand up to rigorous scrutiny."—Paul J. Quirk, University of British Columbia