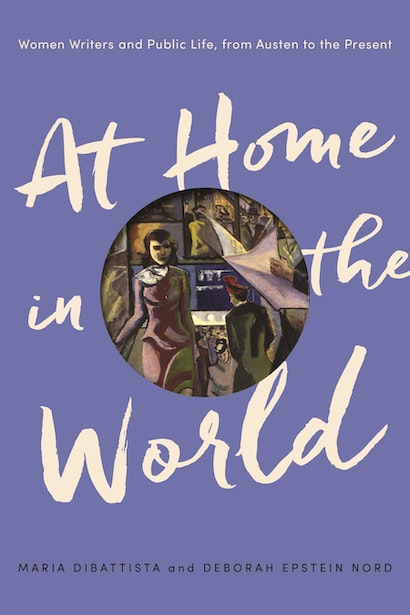 In a bold and sweeping reevaluation of the past two centuries of women’s writing, At Home in the World argues that this body of work has been defined less by domestic concerns than by an active engagement with the most pressing issues of public life: from class and religious divisions, slavery, warfare, and labor unrest to democracy, tyranny, globalism, and the clash of cultures. In this new literary history, Maria DiBattista and Deborah Epstein Nord contend that even the most seemingly traditional works by British, American, and other English-language women writers redefine the domestic sphere in ways that incorporate the concerns of public life, allowing characters and authors alike to forge new, emancipatory narratives.

The book explores works by a wide range of writers, including canonical figures such as Jane Austen, Charlotte Brontë, George Eliot, Harriet Jacobs, Edith Wharton, Virginia Woolf, Willa Cather, Gertrude Stein, and Toni Morrison; neglected or marginalized writers like Mary Antin, Tess Slesinger, and Martha Gellhorn; and recent and contemporary figures, including Nadine Gordimer, Anita Desai, Edwidge Danticat, and Jhumpa Lahiri. DiBattista and Nord show how these writers dramatize tensions between home and the wider world through recurrent themes of sailing forth, escape, exploration, dissent, and emigration. Throughout, the book uncovers the undervalued public concerns of women writers who ventured into ever-wider geographical, cultural, and political territories, forging new definitions of what it means to create a home in the world.

The result is an enlightening reinterpretation of women’s writing from the early nineteenth century to the present day.

"In their re-evaluation of the past 200 years of women's writing, DiBattista and Epstein Nord position Austen as the forerunner of an alternative, public-facing sisterhood in which anti-domestic heroines, wanderers, visionaries and dreamers voyage out."—Frances Wilson, Times Literary Supplement

"Convincing, compelling, and—perhaps most importantly—concise. Spending just few pages at a time on each novel, Nord and DiBattista's readings are close but not confining, and compact enough to illuminate the overall narrative without dragging it down. Readers acquainted with the writers discussed, who range chronologically from Jane Austen and Charlotte Brontë to Nadine Gordimer and Marilynne Robinson, will eagerly await their favorite books’ four pages of fame. The book’s style makes it accessible to less seasoned readers expanding their literary knowledge."—Publishers Weekly

"A thoughtful and lively romp. . . . While it is a tall order to compress 200 years into the same number of pages, the authors succeed admirably. Their introduction to the characters, plotlines and insights of this creative and quirky group is like a smorgasbord of appetisers reminding hungry readers just how tasty these cuisines are. . . . At Home in the World performs an extraordinary service. It shows that women deserve to be read as commentators on the world of affairs."—Elizabeth Cobbs, Times Higher Education

"[A] boldly sweeping study of women writers. . . . DiBattista and Nord are to be congratulated."—Susan Fraiman, American Literary History Online Review

"A much-needed reexamination of women's writing. . . . Sure to become an important addition to feminist literary theory and cultural studies."—Library Journal

"I recommend reading this insightful, wide-ranging book for a renewed outlook on the power of ‘The Female Literary Tradition’ in English-Language writing by a much more diverse, mutually aware cadre of women striving for political effect through texts of varied genres and styles. This traditional book is self-consciously so, and timely."—Alison Booth, Victorian Studies

"Someone once said that there are only two plots in all of literature. You go on a journey or a stranger comes to town. For centuries women, denied the journey, had to await the stranger. But that has been changing for a long time, as At Home in the World makes compellingly clear. While the struggle between home and away is never easily won, more and more women find that they can go on the journey. At Home in the World will serve to enrich and deepen our understanding of feminist literature."—Mary Morris, author of The Jazz Palace

"An ambitious and engaging literary history, At Home in the World paints an exhilarating panorama of British, American, and postcolonial women writers' interventions in public debates on an array of important issues. With its clear, lively style, this magisterial account will be welcomed by scholars, critics, and discerning readers of writers from Jane Austen to Edwidge Danticat."—Christine Froula, Northwestern University

"Pointedly fresh, this is an excellent literary history with a provocative and revealing sweep. Arguing that women's writing since Mary Wollstonecraft and Jane Austen has been an adventure of escape from the domestic sphere, DiBattista and Nord provide an education in how women have shaped and reshaped the novel. At Home in the World deserves to have a wide audience."—Robert L. Caserio, Pennsylvania State University