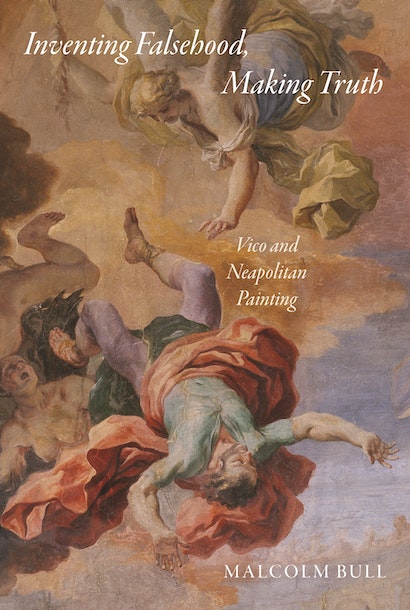 Can painting transform philosophy? In Inventing Falsehood, Making Truth, Malcolm Bull looks at Neapolitan art around 1700 through the eyes of the philosopher Giambattista Vico. Surrounded by extravagant examples of late Baroque painting by artists like Luca Giordano and Francesco Solimena, Vico concluded that human truth was a product of the imagination. Truth was not something that could be observed: instead, it was something made in the way that paintings were made — through the exercise of fantasy.

Juxtaposing paintings and texts, Bull presents the masterpieces of late Baroque painting in early eighteenth-century Naples from an entirely new perspective. Revealing the close connections between the arguments of the philosophers and the arguments of the painters, he shows how Vico drew on both in his influential philosophy of history, The New Science. Bull suggests that painting can serve not just as an illustration for philosophical arguments, but also as the model for them — that painting itself has sometimes been a form of epistemological experiment, and that, perhaps surprisingly, the Neapolitan Baroque may have been one of the routes through which modern consciousness was formed.

Malcolm Bull is university lecturer in fine art at the University of Oxford. His previous books include Anti-Nietzsche, The Mirror of the Gods, and Seeing Things Hidden.

"[A] highly compelling account of an important subject. . . . Bull is to be congratulated on presenting such a thought-provoking study . . . welcome addition to the study of early modern art and thought."—Alexander Marr, Apollo

"[A]rt historians and critics will find in it a fascinating account of how paintings can initiate and/or facilitate philosophical reflection."—Giorgio Baruchello, European Legacy

"This is a daring and highly imaginative book."—Helen Langdon, Burlington Magazine

"Bull is a scholar with a gift for traversing traditional disciplinary boundaries, and his book acknowledges, as has rarely been done before, the wide philosophical dimensions of artistic practice in the 'long seventeenth century.' Given its originality of focus, this synthesis helps reconceptualize the period in a new way."—Tom Nichols, University of Glasgow

"Malcolm Bull is an extraordinary writer—lucid, far reaching, and entirely original. His book explains how painting does not merely provide the subject for philosophical debate when we interpret, but also, quite by itself, manifests a form of philosophical thinking. In what way do the fantasies represented in art manifest a truthful way of thinking? This book offers the answer."—David Carrier, coauthor of Wild Art