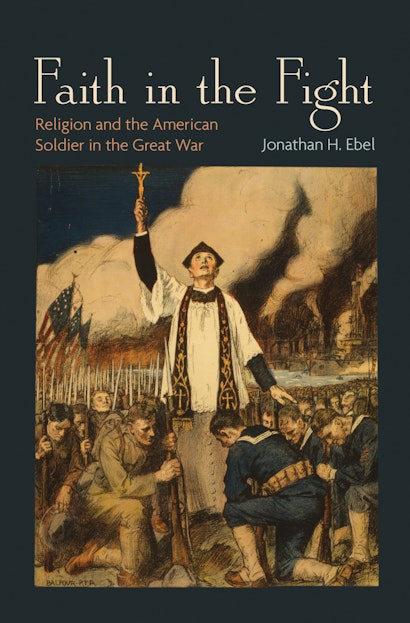 Faith in the Fight tells a story of religion, soldiering, suffering, and death in the Great War. Recovering the thoughts and experiences of American troops, nurses, and aid workers through their letters, diaries, and memoirs, Jonathan Ebel describes how religion — primarily Christianity — encouraged these young men and women to fight and die, sustained them through war’s chaos, and shaped their responses to the war’s aftermath. The book reveals the surprising frequency with which Americans who fought viewed the war as a religious challenge that could lead to individual and national redemption. Believing in a “Christianity of the sword,” these Americans responded to the war by reasserting their religious faith and proclaiming America God-chosen and righteous in its mission. And while the war sometimes challenged these beliefs, it did not fundamentally alter them.


Revising the conventional view that the war was universally disillusioning, Faith in the Fight argues that the war in fact strengthened the religious beliefs of the Americans who fought, and that it helped spark a religiously charged revival of many prewar orthodoxies during a postwar period marked by race riots, labor wars, communist witch hunts, and gender struggles. For many Americans, Ebel argues, the postwar period was actually one of “reillusionment.”


Demonstrating the deep connections between Christianity and Americans’ experience of the First World War, Faith in the Fight encourages us to examine the religious dimensions of America’s wars, past and present, and to work toward a deeper understanding of religion and violence in American history.

Jonathan H. Ebel is assistant professor of religion at the University of Illinois, Urbana-Champaign.

"With a dizzying array of interesting points, Ebel provides a list of new avenues of study. . . . Faith in the Fight is an impressive book that all scholars of twentieth-century American religious history should read and that should be incorporated in all subsequent studies of WWI."—Paul Harvey, Religion in American History blog

"Perhaps no word is more deeply associated with World War I than 'disillusionment.' In the compulsive attempts of the second half of the 20th century to tell secularization narratives, one prominent version had religious faith never recovering from the shell-shock it got in the trenches, 1914-18. Jonathan H. Ebel, in his well-researched and persuasively revisionist study Faith in the Fight, convincingly demonstrates that this loss-of-faith story is wrong, at least for Americans."—Books & Culture

"One of Faith in the Fight's great strengths is its attention to the voices of the men and women on the front lines. . . . Faith in the Fight helps us better understand the relationship between religion and war in the not-so-distant American past. It is also a book that illustrates the dangers inherent in the American penchant for sanctifying state violence. As Ebel masterfully demonstrates, Americans would do well to abandon a little of their faith in the fight."—Matthew Avery Sutton, Christian Century

"Faith in the Fight illustrates the benefit of revisiting our current tidy categories of religion's decline in the face of modernity and secularism, and its readers are rewarded with a well written and fascinating glimpse of American soldiers and war workers' religious romanticism."—Sarah Miglio, Journal of Church and State

"[W]ith his well-written and well-researched book . . . Jonathan H. Ebel . . . has made a stellar contribution to the interdisciplinary study of religion in American history."—Malcolm D. Magee, American History Review

"Ebel's first book, which helps fill the vast empty spaces of American religious historiography, is a truly fine work that displays expert research and storytelling abilities. . . . We should look forward to more of Ebel's work. His book on 'trench religion' will become the standard book on religious faith of the forgotten men and women during the forgotten war."—Matthew Lewis Sutton, Journal of Church History

"Ebel has written an excellent book that deserves a wide readership. . . . [T]he book is an excellent fit for graduate seminars and should interest scholars looking at the specific period or religion and war in general."—Steve Longenecker, Journal of American History

"Faith in the Fight represents a valuable addition to the growing body of literature on the American experience of the Great War."—Edward Madigan, Religion, State and Society

"Faith in the Fight raises interesting questions about American culture and life, and it offers some valid insights into that culture."—Fred R. van Hartesveldt, Anglican and Episcopal History Reviews

"Faith in the Fight contributes a well researched and written addition to the understanding of a war that many Americans relegate to secondary or tertiary status. . . . As we approach the World War I centennial, this is a masterful work that should reignite historiographical interest in this vital event in the nation's history."—David E. Settje, Lutheran Quarterly

"[T]he book is an important contribution to the growing literature on war and American religion."—Jennifer Graber, Religious Studies Review

"In this book, Jonathan Ebel focuses on the Great War and the jolt it delivered to devout young American Christian soldiers. How were they to interpret this bloodletting and their own role in it? Where was God in the vast and terrible story of war? Where was God in relation to America? With keen sensitivity, Ebel takes up these and other questions. His book adds a fascinating and indispensable chapter to the scholarship on World War I."—Jean Bethke Elshtain, author of Sovereignty: God, State, and Self

"In this beautiful and poignant book, Jonathan Ebel draws on the letters and diaries of American soldiers of the First World War to illuminate how they understood their service to be a religious calling. Anyone who thinks about the morality of war must read this book."—Stanley Hauerwas, Duke University Divinity School

"Employing a wide variety of sources, Jonathan Ebel reconstructs the religious meaning of World War I for American soldiers and civilians, and his findings are highly revisionary. The conventional wisdom has been that the Civil War was the last 'romantic' war and that cynicism and disillusionment have ruled ever since. Yet when Ebel actually looks at the evidence, a very different picture emerges—one of deep-seated faith and an idealistic belief in America as a Christian nation."—Harry S. Stout, Yale University