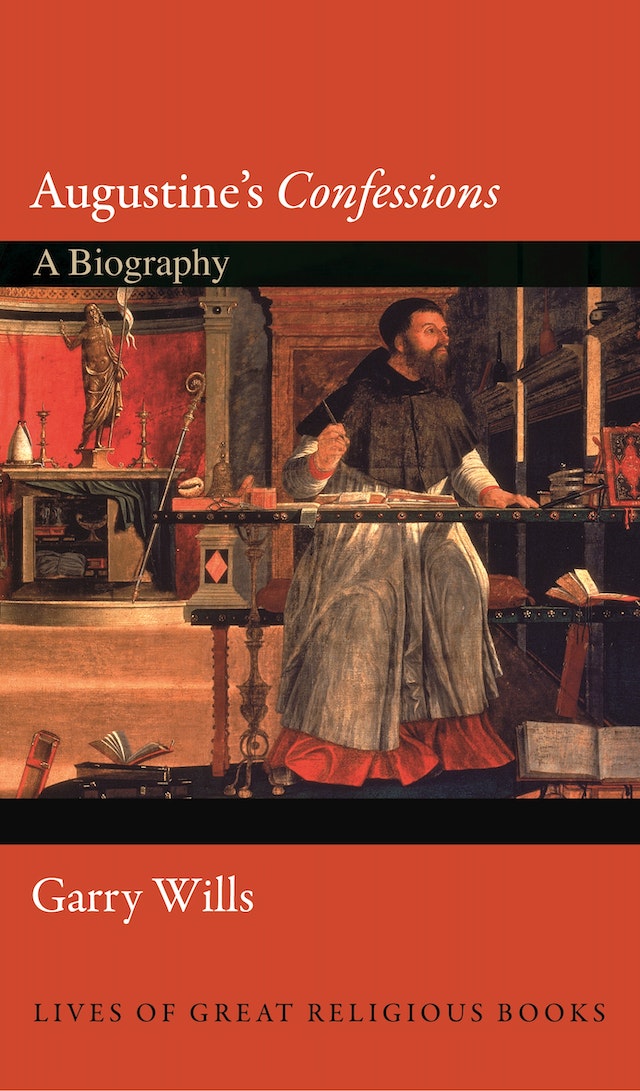 In this brief and incisive book, Pulitzer Prize-winning historian Garry Wills tells the story of the Confessions — what motivated Augustine to dictate it, how it asks to be read, and the many ways it has been misread in the one-and-a-half millennia since it was composed. Following Wills’s biography of Augustine and his translation of the Confessions, this is an unparalleled introduction to one of the most important books in the Christian and Western traditions.

Understandably fascinated by the story of Augustine’s life, modern readers have largely succumbed to the temptation to read the Confessions as autobiography. But, Wills argues, this is a mistake. The book is not autobiography but rather a long prayer, suffused with the language of Scripture and addressed to God, not man. Augustine tells the story of his life not for its own significance but in order to discern how, as a drama of sin and salvation leading to God, it fits into sacred history. “We have to read Augustine as we do Dante,” Wills writes, “alert to rich layer upon layer of Scriptural and theological symbolism.” Wills also addresses the long afterlife of the book, from controversy in its own time and relative neglect during the Middle Ages to a renewed prominence beginning in the fourteenth century and persisting to today, when the Confessions has become an object of interest not just for Christians but also historians, philosophers, psychiatrists, and literary critics.

With unmatched clarity and skill, Wills strips away the centuries of misunderstanding that have accumulated around Augustine’s spiritual classic.

Garry Wills is the best-selling author of many books on religion and American history, including the Pulitzer Prize-winning Lincoln at Gettysburg (Simon & Schuster). His recent books include St. Augustine: A Life (Viking) and a translation of Augustine's Confessions (Penguin Classics).

"Another gem of a little book by Garry Wills. . . . Wills describes brilliantly the manner in which this strange work seeped slowly through literary circles. . . . His book is a passionate plea that we should read Augustine's strange book as it was first heard, and in the light of the purposes for which it was first written."—Peter Brown, New York Review of Books

"Wills does for Augustine's Confessions what he did for the Gettysburg Address, which is to take a well-known iconic work and examine it with fresh eyes. He views the Confessions as a book haunted by Genesis, and this perspective allows him to notice things that are overlooked by commentators whose views are preformed by the interpretive tradition. Having translated the Confessions and written a biography of Augustine, Wills is not afraid to go out on a limb, and so even readers who would not agree with his often cheeky interpretations are forced to look at the work afresh. . . . Wills offers an iconoclastic interpretation of a classic work, one that deserves a fresh treatment every few years."—Augustine J. Curley, Library Journal

"Like a biography of a person, this volume takes Augustine's Confessions and traces its birth, growth and decline, and legacy. Since so much of an author's life is connected to his or her work—especially in the case of Confessions—this can't help but include a decent amount of Augustine's own bio. . . . Very readable and highly engaging."—Wade Osburn, Booklist

"[Augustine] and Wills, 76—one of the most distinguished Catholic intellectuals (and American historians) alive—make a potent pair in this lovely little volume, a biography not of the author, but of the book itself, especially of how it has been received in the 16 centuries since its creation. . . . Augustine is always going to matter to the Western tradition, atheist or religious, for his insights into the human psyche, and his thoughts on memory and the elusiveness of time. Wills, by stripping away centuries of myth-making, makes him more accessible than ever."—Brian Bethune, Macleans

"Garry Wills really is a modern-day Renaissance man. He won a Pulitzer Prize for Lincoln at Gettysburg and then turned his attention to St Augustine, firstly translating Confessions, then writing a biography (St Augustine: A Life) and now offering a 'life' of Confessions from 'The Book's Birth' (the title of the opening chapter) through 'The Book's Conversion' to 'The Book's Baptismal Days' to 'The Book's Afterlife'. And what a story it is."—Bruce Elder, Sydney Morning Herald

"This is a short, reliable and well-written introduction to Augustine's Confessions that describes, firstly, how the Confessions came to be written and, secondly, the author's intentions in writing the Confessions these are not quite the same and, thirdly, the subsequent fate of the book. . . . With a deft touch, and in non-technical language, Wills' introductory book not only relays these ideas to the widest possible readership—but also communicates a sensitive understanding of the original context in which the Confessions were written and of Augustine's intentions in writing them."—Stephen Leach, Metapsychology

"Garry Wills . . . writes about Augustine's Confessions sympathetically but rigorously. He traces its trajectory from first appearance at the end of the 4th century AD until our time, and discusses the ideas contained within it. The result is readable and illuminating, and it sent this reader to Google and Amazon in search of more."—Miriam Cosic, The Australian

"Garry Wills has written a short book that teaches us how to read a longer book. If we follow Wills' instructions we will discover new riches in St. Augustine's seminal classic, The Confessions. . . . This is a very helpful guide to the Confessions that makes the great spiritual classic accessible to a new generation of readers. Wills' book is not only scholarly, but it makes good spiritual reading. It is highly recommended, not just for the regular reader, but for students of Augustine looking for a fresh take on this great book."—Fr. Gilles Mongeau S.J., Catholic Register

"The single most important thing for Wills, the thing he'd most like you to accept, is that Confessions is not autobiography. For Wills, this misreading of Augustine's best-known work has given us any number of interpretations (Freudian, sociological, historical) that obscure the point. And that point is? According to Wills, Confessions exist as a kind of 'training ground' or preparation for a reading of the Bible. He shows us how Augustine uses incidents from his life (some actual, some allegorical, some difficult to place on either side of the ledger) to turn the reader's mind toward holy writ, specifically Genesis. In other words, to prepare us to see/read/feel God's presence as it is revealed in Genesis. . . . His arguments make for vivid reading."—André Alexis, Globe and Mail

"I have taught the Confessions about twenty times, yet there are things in it I hadn't noticed until Wills pointed them out. This is a tribute to his erudition and critical acumen, but it's also a tribute to the Confessions itself, which, like any other classic, offers the reader an inexhaustible surplus of meaning."—Lawrence S Cunningham, Commonweal

"[A] brief, beautifully written story of the Confessions themselves. . . . [Wills] is a prolific writer who has tackled an extraordinary range of topics. . . . Wills clearly loves his subject . . . and that admiration is tied to a clear-headed examination of the many ways Augustine's critics have gone astray over time."—Jean Bethke Elshtain, American Conservative

"This is a masterful introductory work, written by someone of real eloquence and theological sensitivity. It is worth every minute spent on a first reading, and I have no doubt I will go back to the underlined passages each time I reread Confessions in the future."—Kim Paffenroth, Biography

"Garry Wills rescues Augustine's Confessions from its posterity, peeling away layer after layer of anachronistic reactions to the text and providing an invaluable aid to readers. A master restorer, Wills gives us a picture carefully cleaned of a millennium-and-a-half of varnish. More than that: he helps us appreciate what the original colors actually meant to those who first made contact with Augustine's strange book. This is vintage Wills—punchy, clear, well-argued, and beautifully translated, both linguistically and culturally."—Peter Brown, Princeton University, author of Augustine of Hippo: A Biography

"This is a sensitive, informed, and just appreciation of and introduction to the Confessions. It does justice both to the appealing narrative of sin and fall that preoccupies most readers and to the more complicated structure and ending of the whole work. Few books on the Confessions rival the excellence or concision of this one."—James J. O'Donnell, Georgetown University, author of Augustine: A New Biography