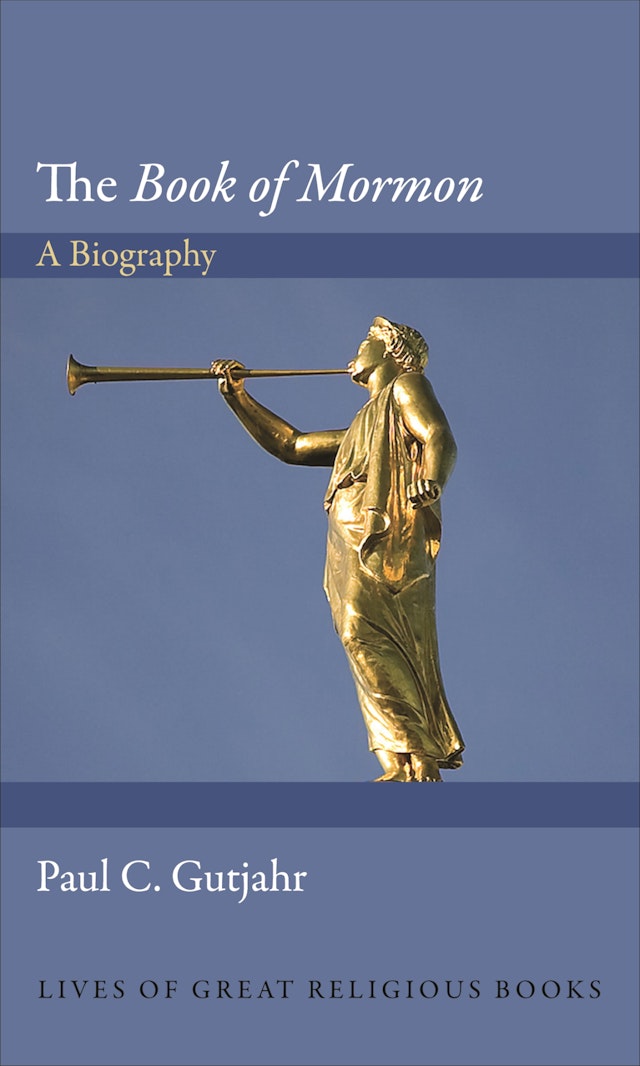 Late one night in 1823 Joseph Smith, Jr., was reportedly visited in his family’s farmhouse in upstate New York by an angel named Moroni. According to Smith, Moroni told him of a buried stack of gold plates that were inscribed with a history of the Americas’ ancient peoples, and which would restore the pure Gospel message as Jesus had delivered it to them. Thus began the unlikely career of the Book of Mormon, the founding text of the Mormon religion, and perhaps the most important sacred text ever to originate in the United States. Here Paul Gutjahr traces the life of this book as it has formed and fractured different strains of Mormonism and transformed religious expression around the world.

Gutjahr looks at how the Book of Mormon emerged from the burned-over district of upstate New York, where revivalist preachers, missionaries, and spiritual entrepreneurs of every stripe vied for the loyalty of settlers desperate to scratch a living from the land. He examines how a book that has long been the subject of ridicule — Mark Twain called it “chloroform in print” — has more than 150 million copies in print in more than a hundred languages worldwide. Gutjahr shows how Smith’s influential book launched one of the fastest growing new religions on the planet, and has featured in everything from comic books and action figures to feature-length films and an award-winning Broadway musical.

Paul C. Gutjahr is professor of English at Indiana University. His books include Charles Hodge: Guardian of American Orthodoxy and An American Bible: A History of the Good Book in the United States, 1777-1880. 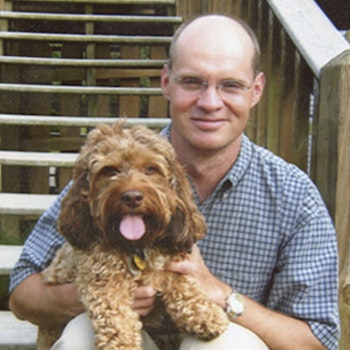 "To explain this book—now published in 150 million copies in 110 languages—Gutjahr recounts the life of Joseph Smith, whose status as the prophet of the Church of Jesus Christ of Latter-Day Saints rests upon his claim that he translated the Book of Mormon from ancient gold plates delivered to him by an angel. . . . Undeterred by skeptics' allegations of fraud, a small army of missionaries have made the book a powerful proselytizing tool . . . but as an engaging human story, it has also inspired the creative impulses of visual, cinematic, and theatrical artists. . . . A very helpful introduction to a perplexing but increasingly visible religious text."—Bryce Christensen, Booklist

"[A] fascinating history of an important document of American culture."—Steven Poole, The Guardian

"This is a book that has been waiting to be written. There have been previous accounts of the Book of Mormon by believers and nonbelievers, but most have been too polemical for general readers. Gutjahr (English, Indiana Univ.; Charles Hodge: Guardian of American Orthodoxy) doesn't ignore controversial issues of history and authenticity, as is the case with some other short introductions; rather, he provides several alternative interpretations of the book's origins. . . . Needless to say, especially with the tremendous success of the Broadway show The Book of Mormon, there is a great need for a book like this. It should appeal to scholars and interested general readers alike."—David S. Azzolina, Library Journal

"America is experiencing something of a Mormon moment. . . . But much remains unknown about this faith, including the circumstances surrounding its primary sacred text. Paul C. Gutjahr's well-written and erudite account of the history of the Book of Mormon fills much of this void. . . . Gutjahr's account leaves one with considerable appreciation for the enduring value of the Book of Mormon."—Wade Clark Roof, Pacific Standard Magazine

"Gutjahr has read widely in both Mormon and non-Mormon sources, and he has taken the trouble to get the basic facts right. . . . The Book of Mormon: A Biography is a quick read that Latter-day Saints will find enjoyable and thought-provoking. It would also be perfect for non-member friends who are curious about the Book of Mormon but are looking for something more neutral or balanced than materials published by the Church, yet are perhaps not quite interested enough to take on a thick monograph like By the Hand of Mormon or Understanding the Book of Mormon."—Grant Hardy, Meridian Magazine

"Gutjahr's biography is an easy-to-read overview of the Book of Mormon's life, a reminder that the Book of Mormon is the world's text, not merely the text of the Church of Jesus Christ of Latter-day Saints in spite of the Church's careful efforts (through copyright measures and other means) to maintain the text's integrity. And even within the LDS tradition itself, the book shapeshifts as it traverses landscapes of differing historical contexts and rhetorical objectives. Such is the life of books, such is the life Gutjahr ably recounts."—Blair Hodges, Dialogue

"Gutjahr tells the story of this very strange book . . . with courage and verve."—Jon Sweeney, Tablet

"Gutjahr's contribution to the 'Lives of Great Religious Books' series is a concise and eminently teachable history of the most important American-made world scripture. In a welcome departure from most such accounts, Gutjahr gives as much space to the Book of Mormon's 20th-century life as he does to its ancient or 19th-century origins, presenting in a compact, readable form a great deal of relatively recent history about its cultural and religious significance. . . . Highly recommended. Lower-division undergraduates and above; general readers."—Choice

"The Book of Mormon: A Biography is overall a delight. . . . Gutjahr's . . . book is a terrific example of a work typifying legitimate academic study, particularly as compared with most of the poor mistreatments of Mormon studies. It is balanced and engaging enough to give non-LDS readers a clear insight into what members consider a truly divine work and, perhaps more importantly, accurate and honest enough to satisfy LDS readers."—Tod R. Harris, BYU Studies Quarterly

"Gutjahr succeeded in writing an informative account of the history of the Book of Mormon. His style provides enough information for those who are just curious about the Book of Mormon and Mormonism while at the same time satisfying a more interested reader's curiosity by providing a platform for further research."—Ingrid Sherlock-Taselaar, International Journal for the Study of New Religions

"Gutjahr has produced a valuable biography of an American apocrypha for a general audience. He provides a valuable summary of various editions and translations of a sacred text that has made an indelible impact on religion in America and beyond. The overview of scholarly debates about the historical claims of the scripture is fair, accessible and concise. His outline of the illustrations in the Book of Mormon and its life on the stage and in the cinema is original and will be of value even to specialists in Mormonism."—Thomas Murphy, Journal of Alternative and Emergent Religions

"The Book of Mormon: A Biography is very readable and portrays the Mormon position well."—Eric Johnson, Christian Research Journal

"Paul Gutjahr has written the perfect book on the Book of Mormon: fascinating, forthright, empathetic, critical, and discerning. Gutjahr employs his sheer intellectual curiosity to produce a lively, enlightening history that deftly circles among Joseph Smith, Mormons, and critics as though they were themselves engaged in an intelligent civil conversation. The result is an ideal guide to the life of a now-iconic American religious text."—Jon Butler, Yale University

"There can be no doubt that the Book of Mormon is among the most influential books in American history. Gutjahr's clear, compelling narrative traces this influence from the book's American beginnings through translations, migrations, and cultural adaptations into its global twenty-first century. Gutjahr treats his subject with respect, thoughtfulness, appreciation, scholarly rigor, and intellectual curiosity. Mormons and non-Mormons alike will find his book fascinating, freshly informative, and a pleasure to read."—Joanna Brooks, author of The Book of Mormon Girl

"With impressive command of detail rendered in lucid, accessible prose, Paul Gutjahr has produced a marvelously informative account of the Book of Mormon from its origins to the present. This is a very useful book for understanding American religious history."—Randall Balmer, author of The Making of Evangelicalism: From Revivalism to Politics and Beyond

"This probing and engaging study surveys the history, use, translation, and adaptation into other media of the Book of Mormon. I know of nothing else quite like it. Religious traditions change over time, and controlling a sacred text plays an important role in the self-identity of the community. Gutjahr explains not simply how changes in the text took place, but why."—Laurie F. Maffly-Kipp, editor of American Scriptures: An Anthology of Sacred Writings

"Paul Gutjahr's book offers a well-written, balanced summary of much of the scholarship on the Book of Mormon, and presents new insights and lesser-known information as well."—Richard Lyman Bushman, author of Joseph Smith: Rough Stone Rolling