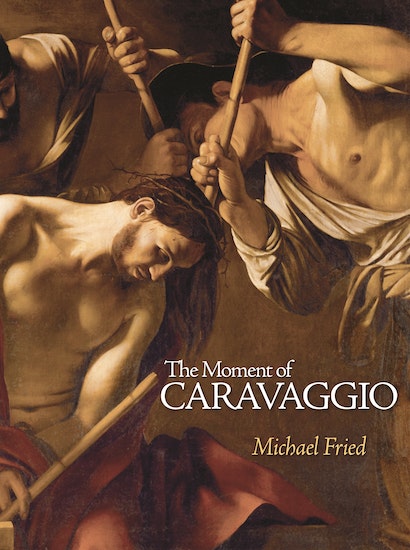 This is a groundbreaking examination of one of the most important artists in the Western tradition by one of the leading art historians and critics of the past half-century. In his first extended consideration of the Italian Baroque painter Michelangelo Merisi da Caravaggio (1573-1610), Michael Fried offers a transformative account of the artist’s revolutionary achievement. Based on the A. W. Mellon Lectures in the Fine Arts delivered at the National Gallery of Art, The Moment of Caravaggio displays Fried’s unique combination of interpretive brilliance, historical seriousness, and theoretical sophistication, providing sustained and unexpected readings of a wide range of major works, from the early Boy Bitten by a Lizard to the late Martyrdom of Saint Ursula. And with close to 200 color images, The Moment of Caravaggio is as richly illustrated as it is closely argued. The result is an electrifying new perspective on a crucial episode in the history of European painting.

Focusing on the emergence of the full-blown “gallery picture” in Rome during the last decade of the sixteenth century and the first decades of the seventeenth, Fried draws forth an expansive argument, one that leads to a radically revisionist account of Caravaggio’s relation to the self-portrait; of the role of extreme violence in his art, as epitomized by scenes of decapitation; and of the deep structure of his epoch-defining realism. Fried also gives considerable attention to the art of Caravaggio’s great rival, Annibale Carracci, as well as to the work of Caravaggio’s followers, including Orazio and Artemisia Gentileschi, Bartolomeo Manfredi, and Valentin de Boulogne.

Michael Fried is the J. R. Herbert Boone Professor Emeritus of Humanities and the History of Art at Johns Hopkins University. He is the author of many books, including Absorption and Theatricality, Courbet's Realism, Manet's Modernism, Menzel's Realism, and Why Photography Matters as Art as Never Before. He has also written several books of poems, including Promesse du Bonheur. He is the recipient of a Distinguished Achievement Award from the Andrew W. Mellon Foundation.

"[An] infinitely erudite investigation of, among other things, the pervasiveness of violence in Caravaggio's painting."—Holland Cotter, New York Times

"Fried's study argues across radically different artistic periods . . . the better to construct an argument that is as big as it is granular."—Angus Trumble, Times Literary Supplement

"In this exquisitely illustrated volume, art historian Michael Fried binds Michelangelo Caravaggio's short life (1571-1610) and tumultuous times to the stirring innovations in his art, especially with regard to portraiture, violence and realism. With a little help from the master, Fried encapsulates Caravaggio's tempestuous personality, his place within the religious and political intrigues of the Baroque era, and his primary significance as an artist."—Globe & Mail

"No great surprise about my book of the year. I had been waiting for Michael Fried's The Moment of Caravaggio (Princeton University Press) ever since hearing an early version of its opening ideas in Berkeley years ago, and when the volume arrived it took me by storm. So The Moment of Caravaggio stands or falls, as art history mostly should, by the intensity and detail of its accounts of specific works: by its ability to extract a painting from the ordinary round of 'formal analysis,' iconography, and 'contextualization' and put the reader/viewer almost physically in a new kind of contact with it. This happens repeatedly in Fried's new study. The book's key analyses are beautiful and, pace the critics, often profoundly surprising. I found that as the book went on they more and more offered me a way—this is regularly the case with the arc of a Fried argument—to think about questions the author himself did not quite pose, or did not pose as I might want to. . . . In a manner typical of the writer at his best (and maybe this is what so gets up the nose of normal art history about him) his book has robbed me of the common-sensical ground on which and from which I thought I could see—could 'place'—a major artist. It made me aware of what Caravaggio's excessiveness might have been about. And it reminded me of the sheer strangeness—the preposterousness—of European painting's commitment to the real."—T. J. Clark, Artforum

"So much has been written about the High Renaissance artist Caravaggio, it is hard to believe more could be said. But the illustrious Michael Fried, of Johns Hopkins University, manages to say considerably more in his trenchant re-examination of the dynamic painter's art. . . . Fried astounds the reader with thoughts about Caravaggio's use of the mirror in art, his fascination with the 'immersive' or 'specular' moment. . . . The book is lavishly illustrated and intellectually demanding, but given the greatness of the subject and the perspicacity of the author, both are certainly to be expected."—Tracey O'Shaughnessy, Republican-American

"Fried is a persistent spectator, and his careful eye produces remarkable analysis that make for a thrilling read. . . . His process of looking should be an inspiration to students of art history at many levels, and his observations about how viewers respond to paintings are thought-provoking. Finally, the extensive and outstanding illustrations in this handsome book are a perfect complement to Fried's interpretations."—Choice

"Seldom does one encounter a profoundly surprising yet rigorously historical reading of a very familiar work; in The Moment of Caravaggio this happens with painting after painting. Though an account primarily of Caravaggio and his circle, Fried's discussions of address, of autonomy, of interiority, and of the dispositif of easel painting, among other topics, will resonate across the field. Every scholar of early modern art should read this book."—Michael W. Cole, Columbia University

"No one sees paintings better than Michael Fried, or thinks as persistently or with such philosophical depth about such seeing, about the very possibility of pictorial meaning. The Moment of Caravaggio is a spectacular, compelling addition to his oeuvre. An engrossing and often simply thrilling read, the book is a triumph."—Robert B. Pippin, University of Chicago

"This is a dazzling tour de force. Michael Fried's readings of a series of Caravaggio's most fascinating and enigmatic pictures keep one turning the pages with the greatest pleasure. Fried's arguments are compelling, muscular, and graceful."—Leonard Barkan, Princeton University