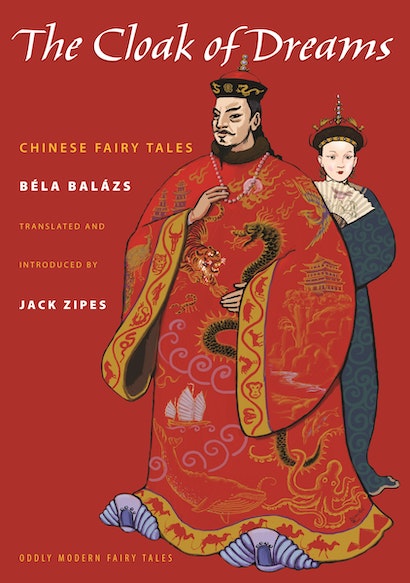 A man is changed into a flea and must bring his future parents together in order to become human again. A woman convinces a river god to cure her sick son, but the remedy has mixed consequences. A young man must choose whether to be close to his wife’s soul or body. And two deaf mutes transcend their physical existence in the garden of dreams. Strange and fantastical, these fairy tales of Béla Balázs (1884-1949), Hungarian writer, film critic, and famous librettist of Bluebeard’s Castle, reflect his profound interest in friendship, alienation, and Taoist philosophy. Translated and introduced by Jack Zipes, one of the world’s leading authorities on fairy tales, The Cloak of Dreams brings together sixteen of Balázs’s unique and haunting stories.


Written in 1921, these fairy tales were originally published with twenty images drawn in the Chinese style by painter Mariette Lydis, and this new edition includes a selection of Lydis’s brilliant illustrations. Together, the tales and pictures accentuate the motifs and themes that run throughout Balázs’s work: wandering protagonists, mysterious woods and mountains, solitude, and magical transformation. His fairy tales express our deepest desires and the hope that, even in the midst of tragedy, we can transcend our difficulties and forge our own destinies.


Unusual, wondrous fairy tales that examine the world’s cruelties and twists of fate, The Cloak of Dreams will entertain, startle, and intrigue.

Jack Zipes is the translator of The Complete Fairy Tales of the Brothers Grimm (Bantam), the editor of The Great Fairy Tale Tradition (Norton), and the author of Why Fairy Tales Stick, among many other books. He is professor emeritus of German and comparative literature at the University of Minnesota.

"Except among a few film and music scholars, Balázs is barely remembered, and only four books from the mountain of his works—novels, stories, poetry, plays, puppet plays, screenplays, libretti, political articles, and film criticism—have ever been translated into English. But he was an archetypal modernist, a type that is now nearly extinct: the man who seemed to know everyone, do everything, and write everything. . . . Unlike others, [Balázs] did not believe that the movies would mean the end of stories and novels, and it is not surprising that he wrote The Cloak of Dreams at the same time that he wrote his first screenplay. In the present moment, when fiction has yet again been declared dead, these deliberately anachronistic, pseudo-Oriental, and completely delightful tales are further examples of the perennial human need for imaginative narrative told in words."—Eliot Weinberger, New York Review of Books

"Personally, I found Zipes' introduction—roughly a third of this slim volume—the most interesting part of the book. Zipes provides a fascinating story of a complicated man, buffeted by his place in history, benefitting and suffering from the tumultuous times in which he lived."—Heidi Anne Heiner, SurLaLune Fairy Tales Blog

"[A] highly informative introduction to the present work by its translator, the university professor and fairy-tale specialist Jack Zipes, who has clearly moved beyond his speciality and gained great insight into Hungary's pre-1919 circles of radical artists and social critics, of which both Balázs and Lukács were members. He explains how the writing of this collection of Chinese-style tales was not something out of the ordinary on the part of Balázs, but rather dovetailed quite neatly with his search for meaning in life (and death), his belief in the power and imagery of folk tales and his attraction, albeit not conversion, to Taoism."—Bob Dent, Budapest Times

"Brought out in the Oddly Modern Fairy Tales series, this lovely volume is as wonderful to hold and behold as it is to read. . . . The tales reflect Balazs's growing interest in communism and Taoism and, as Zipes notes, Balazs's 'profound personal concerns about friendship, alienation, poetry, transformation, and transcendence.'"—Choice

"This is a very interesting and unusual book and will be of interest to a variety of readers."—James H. Grayson, Folklore

"A splendid modern work. . . . What baroque dreams, grotesque scenes, ghostly, ridiculous, strange, and chilling brainstorms!. . . All of this is remarkable, original, and uncanny. . . . I recommend that readers go and find some good time to spend with this beautiful book."—Thomas Mann

"Flirting with aestheticism and exoticism, Béla Balázs's fairy tales draw their power from an oracular voice that traces paths of desire, dread, rapture, and sorrow. A master stylist, Balázs puts us in touch with the sublime through velvety prose that mimics the brush strokes of master calligraphers. Jack Zipes's introduction tells its own fascinating tale about how a Hungarian writer and intellectual found redemption in fairy tales."—Maria Tatar, author of Enchanted Hunters: The Power of Stories in Childhood

"These fairy tales are wonderful, touching, and fantastic—you can feel the giddy liberty Balázs gave himself in writing them. I enthusiastically recommend them to anyone who can still feel the pleasure of being kidnapped by fantasy and being taken away to a land that is both vividly colored and intellectually curious. The collection is a delight and Jack Zipes's introduction is splendid."—Andrei Codrescu, author of The Posthuman Dada Guide

"This translation of what Thomas Mann called a 'beautiful book' will enchant readers. Balázs creates a world of dreams in which the alienation of man from woman and soul from body is imaginatively overcome."—Lee Congdon, James Madison University

"A poet in many genres—verse, drama, short stories, tales, novels, diaries, memoirs, philosophy, films, and film theory—Béla Balázs was one of the great dreamers of Hungary's sensational fin-de-siècle generation. His long journey from Szeged, Hungary led him through Budapest, Vienna, Berlin, and Moscow, and back to Budapest. These Chinese fairy tales reflect Balázs's wisdom, his powers of visual imagery, psychological insight, and playfulness."—Tibor Frank, Eötvös Loránd University, Budapest

"An astonishing find that deserves to be brought to light. The translations are beautifully poetic and a joy to read."—Anton Kaes, University of California, Berkeley

"These wonderful and bizarre tales are at once complex and simple. I found myself rereading several and discovering each time some new and wondrous twist and detail."—Nora M. Alter, Temple University