A groundbreaking account of the role of writing in Michelangelo's art 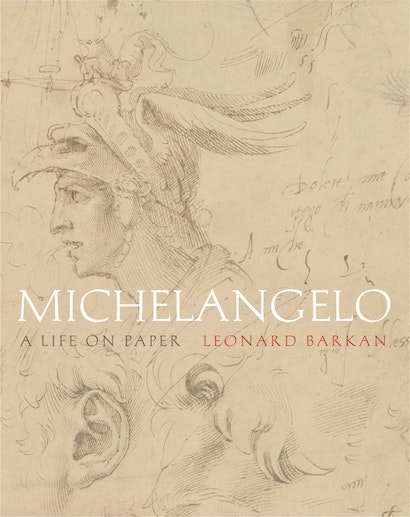 Michelangelo is best known for great artistic achievements such as the Sistine ceiling, the David, the Pietà, and the dome of St. Peter’s. Yet throughout his seventy-five year career, he was engaged in another artistic act that until now has been largely overlooked: he not only filled hundreds of sheets of paper with exquisite drawings, sketches, and doodles, but also, on fully a third of these sheets, composed his own words. Here we can read the artist’s marginal notes to his most enduring masterpieces; workaday memos to assistants and pupils; poetry and letters; and achingly personal expressions of ambition and despair surely meant for nobody’s eyes but his own. Michelangelo: A Life on Paper is the first book to examine this intriguing interplay of words and images, providing insight into his life and work as never before.

This sumptuous volume brings together more than two hundred stunning, museum-quality reproductions of Michelangelo’s most private papers, many in color. Accompanying them is Leonard Barkan’s vivid narrative, which explains the important role the written word played in the artist’s monumental public output. What emerges is a wealth of startling juxtapositions: perfectly inscribed sonnets and tantalizing fragments, such as “Have patience, love me, sufficient consolation”; careful notations listing money spent for chickens, oxen, and funeral rites for the artist’s father; a beautiful drawing of a Madonna and child next to a mock love poem that begins, “You have a face sweeter than boiled grape juice, and a snail seems to have passed over it.” Magnificently illustrated and superbly detailed, this book provides a rare and intimate look at how Michelangelo’s artistic genius expressed itself in words as well as pictures.

Leonard Barkan is the Class of 1943 University Professor of Comparative Literature at Princeton University. His books include Unearthing the Past: Archaeology and Aesthetics in the Making of Renaissance Culture; The Gods Made Flesh: Metamorphosis and the Pursuit of Paganism; and Satyr Square: A Year, a Life in Rome. 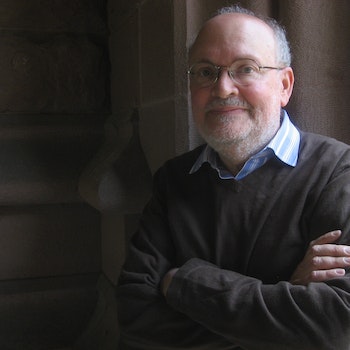 "Personable in tone, astute in observation, Mr. Barkan's book is that rare thing, a historical study as absorbing as a novel."—Holland Cotter, New York Times

"Barkan has not only found something new to say about this well-picked-over artist; he has come up with a new approach to his subject, producing one of the most absorbing books of the year. Like many Renaissance artists, Michelangelo often used the same piece of paper for multiple purposes. A given sheet might contain sketches, wording for a contract, fragments of verse and a shopping list—what Mr. Barkan vividly describes as a 'riot of activities.' Until now, scholars have approached these sheets piecemeal, focusing on the parts of greatest interest to them—the figure sketches, say—to the exclusion of the others. Mr. Barkan's simple but, as it turns out, revolutionary idea was to ask himself: 'What can we learn by taking each sheet as an organic unity and regarding everything on it as equally relevant?' Mr. Barkan's book blends art history, biography and detective work to give us an unparalleled insight into the mind of Michel angelo as a creator, citizen, papal lackey, businessman and family man."—Eric Gibson, Wall Street Journal

"Barkan's ingenious, lavishly illustrated study does not linger over the familiar aspects of the Divine One's life and work. It focuses instead on the artist's 'life on paper,' the hundreds of sheets that have survived containing drawings, poems, doodles, instructions to assistants and 'notes to self.' For Barkan, a professor of comparative literature at Princeton, these sheets are a treasure trove of aesthetic delights; traces of the historical context of Renaissance art making; and, most important, a window onto the personality and artistic practice of a figure who came to define genius. . . . Barkan is a tentative but deeply learned interpreter. His close readings of these complex traces are marvels of erudition, even though he understands that claims about the meaning of these images will never be proven. . . . Barkan is a sensitive and thoughtful guide through this fragile legacy of a monumental figure. Michelangelo, he writes, 'remains stuck in the paradox of a godlike creativity that cannot bring him closer to God.' This biography of the artist's 'life on paper' reveals both his solitude and his efforts at communion. Barkan's reading of the richly evocative paper trail reminds us how much we still have to learn about this towering, quivering man."—Michael S. Roth, Washington Post

"A sumptuous art book full of brain food, Michelangelo is a book and concept that has been hiding in plain sight for centuries. Princeton University Comp Lit Professor Leonard Barkan has decided to shift his eye, and attention, two inches to the left and right to take seriously all the scribbling, doodling, lines of poetry, and notes to workshop assistants, in the margins of Michelangelo's drawings on paper. (The volume includes more than 200 museum-quality reproductions of the artist's most private papers, many in color.) As quirkily brilliant—and ultimately more satisfying and helpful than—Derrida's '80s meditations on Nietzche's laundry list, Barkan's book is both fun and a paradigm shift."—Brad Gooch, Daily Beast

"With a similar spirit of pure joy in language's capacity to illuminate great art and great artists, Leonard Barkan in Michelangelo: A Life on Paper gives us a more human Michelangelo who looks and sounds a lot like us today, but with all the genius left intact."—Bob Dugan, Big Think

"Barkan explores the full complexity of Michelangelo as revealed in hundreds of pieces of paper on which the artist combined both writing and drawing. This is the first study to fully explore the intriguing interplay of words and images, providing numerous insights into the artist's life, work, and unconscious motivations. . . . His brilliant analysis of individual sheets vividly highlights the important role played by the written word in Michelangelo's artistic process and creativity. The book provides a rare and intimate look at how Michelangelo's artistic genius expressed itself, especially in moments of unselfconscious expression when the artist shifted from drawing to words and vice versa. Illustrated with more than 200 excellent reproductions, many in color, this sumptuous volume is beautifully produced."—Choice

"Barkan's analyses are rich and complex—this is a book that rewards close reading. . . . The book is beautifully produced, with excellent reproductions."—Bernadine Barnes, European Legacy

"Leonard Barkan has discovered and explored the many dimensions of Michelangelo's life on paper, that is, those sheets on which the artist juxtaposed text and image, sublime pictorial and poetic ideas with the most quotidian concerns, graphic notions of the imagination alongside mundane shopping lists. Analyzing the shifting dynamics of mise-en-page, of ellipsis and parataxis, of private and public expression, Barkan draws a rich portrait of the man; this is a portrait all the more convincing for its recognition of tension and conflict resolvable not in the life but only within the world of the paper."—David Rosand, Columbia University

"Open this book and sit down at Michelangelo's worktable, where writing and art-making happen one on top of the other. Writing surfaces continually invite doodles, while stunning feats of draftsmanship meet an unrelenting stream of bills, letters, poems, and inside jokes. In the congenial company of a preeminent critic of the art and literature of the Renaissance, we follow the careers of sheets of paper marked up, handed off to assistants, corrected, then revisited years later, then sent off—or, more often, filed away in Michelangelo's scrupulous archive. From the midst of this productive chaos, Leonard Barkan counsels us to abandon the dream of a congruent collaboration of word and image, pointing the way instead to a concrete and strangely familiar poetics of intersection and interruption."—Alexander Nagel, New York University

"Barkan's book challenges the vast body of studies on Michelangelo with a strikingly new and revealing perspective. In his analysis of surviving sheets that contain writings relating to the artist's adjacent figural and architectural studies, Barkan illuminates Michelangelo's career as an artist, his psychological and spiritual evolution, his social and professional relationships, and the creation of poems for which he was equally celebrated in his time. His interpretations are consistently perceptive and informed by a command of both the art-historical and literary corpus of scholarship."—James S. Ackerman, author of The Architecture of Michelangelo

"Leonard Barkan's evocative Michelangelo: A Life on Paper limns the mysteries of expression in the so-called hieroglyphs of Michelangelo and traces, with Barkan's characteristic brilliance, how word and image overlay, interplay, consort, and ultimately compose the solitary artist's signature language. An astute reading of interior life and outer symbol, methodologically sound, and deeply empathetic, Michelangelo: A Life on Paper is an illuminating analysis of the relation of art and life and where we might go to find it."—Brenda Wineapple, author of White Heat: The Friendship of Emily Dickinson and Thomas Wentworth Higginson

Michelangelo: A Life on Paper manages to capture the restless movement of the great artist's quicksilver mind. It takes us deep into Michelangelo's creative process, a place where public and private, sacredness and carnality, grandeur and pettiness, vast ambition and self-tormenting doubts are all tangled together. Barkan seems to possess, as if vividly inscribed in his own memory, the hundreds of sheets of paper on which Michelangelo set down his sketches and poems. By sharply focusing on the complex relation on these sheets between words and images, this remarkable book chronicles what Barkan calls the artist's lifelong acts of 'personal refashioning.'"—Stephen Greenblatt, Harvard University

"In the excitement of what amounts to a paper chase—poems, drawings, and a wilderness of scribbling—Barkan reaches ever deeper into the Michelangelo arcanum; what had seemed entanglement is by patient sifting discovered to be a solution, the problem proved: 'Mortal flesh made God.'"—Richard Howard, series editor of the Lockert Library of Poetry in Translation and author of Inner Voices: Selected Poems, 1963-2003

"Barkan's careful, empathetic investigation reveals a mind of ceaseless experimentation, clustered with fragments, memories, allusions, desires in which the dialogue of writing and drawing reveals the creative paradoxes and mysteries of Michelangelo's genius, what Barkan calls 'the psychopathologies of his everyday life.' Superbly researched, exquisitely illustrated, and scintillatingly written, this book changes our understanding of the most colossal master of the Renaissance."—Jas Elsner, University of Oxford

"In a series of elegant, often provocative essays covering the entire arc of Michelangelo's visual signing, Barkan's analytic perspective elicits new connections and new levels of significance that have eluded his predecessors. Thanks to Barkan, future students of Michelangelo's graphic work will have to look and think harder."—Irving Lavin, professor emeritus, Institute for Advanced Study

"This is a brilliant book. Barkan is an accomplished scholar of Renaissance literature and poetry, and a person completely conversant and adept in analyzing and discussing visual imagery. The manner in which he deftly moves between writing and drawing, between word and image, is breathtaking. An exhilarating study."—William E. Wallace, author of Michelangelo: The Complete Sculpture, Painting, Architecture

"This is a most significant topic by a scholar at the top of his game. Barkan has altered many of my own settled understandings of the artist. This book is an important contribution to Renaissance studies, and a stimulating and fresh approach to Michelangelo scholarship. Like the drawings and inscriptions it analyzes, it must be savored over multiple visits."—Larry Silver, author of Marketing Maximilian: The Visual Ideology of a Holy Roman Emperor