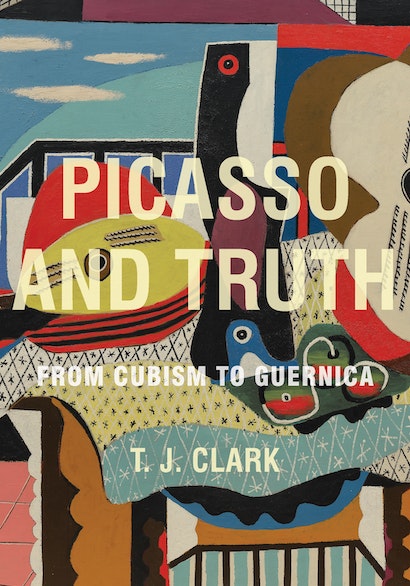 Picasso and Truth offers a breathtaking and original new look at the most significant artist of the modern era. From Pablo Picasso’s early The Blue Room to the later Guernica, eminent art historian T. J. Clark offers a striking reassessment of the artist’s paintings from the 1920s and 1930s. Why was the space of a room so basic to Picasso’s worldview? And what happened to his art when he began to feel that room-space become too confined—too little exposed to the catastrophes of the twentieth century? Clark explores the role of space and the interior, and the battle between intimacy and monstrosity, in Picasso’s art. Based on the A. W. Mellon Lectures in the Fine Arts delivered at the National Gallery of Art, this lavishly illustrated volume remedies the biographical and idolatrous tendencies of most studies on Picasso, reasserting the structure and substance of the artist’s work.

With compelling insight, Clark focuses on three central works—the large-scale Guitar and Mandolin on a Table (1924), The Three Dancers (1925), and The Painter and His Model (1927)—and explores Picasso’s answer to Nietzsche’s belief that the age-old commitment to truth was imploding in modern European culture. Masterful in its historical contextualization, Picasso and Truth rescues Picasso from the celebrity culture that trivializes his accomplishments and returns us to the tragic vision of his art—humane and appalling, naïve and difficult, in mourning for a lost nineteenth century, yet utterly exposed to the hell of Europe between the wars.

T. J. Clark is George C. and Helen N. Pardee Professor of Art History Emeritus at the University of California, Berkeley. He is the author of The Painting of Modern Life (Princeton), The Sight of Death, and Farewell to an Idea, and the coauthor of (with "Retort") Afflicted Powers.

"Brain-expanding but embracing, too. . . . T. J. Clark's Picasso and Truth [will] be with me for a good long time."—Jonathan Lethem, New York Times Book Review

"Clark is very good at pointing out in detail the complex and radical ways in which Picasso's paintings were conceived. He discusses a number of individual works . . . with admirable awareness of their complexity, and the book is full of acute observations."—Jack Flam, Times Literary Supplement

"At his best, he is, simply, brilliant. At his worst, he is also brilliant."—Kevin Jackson, Literary Review

"Thrilling. . . . Thus space becomes an arena for truth-telling after all: a conclusion with optimistic implications for the legacies we can still seek in 20th-century art if we explore, as Clark does with supreme insight, the meeting ground between art and politics."—Jackie Wullschlager, Financial Times

"[Clark's] prose is abundant with tantalising aphorisms and observations. Some are sparkling asides but more often they act as spurs that encourage us to look more closely and less complacently at Picasso's work. . . . The book's lavish production values make for excellent reproductions of the paintings, and its copious illustrations include many cropped details as well as an imaginative range of image comparisons. . . . He is rare, among contemporary art historians."—Thomas Marks, Daily Telegraph

"Few living art historians have T. J. Clark's ability to make us look afresh at canonical artists and rethink the intellectual content and context of their works. In this study, Clark approaches Picasso taking Nietzsche as his guide; eschewing biographical criticism, he offers bold close readings of the paintings from the 1920s and '30s, and plots their trajectory from the optimism of Cubism to a style that is knowingly dark and monstrous."—Apollo

"An intellectual high-wire act, commanding, compelling, thought-provoking . . . thrilling. . . . Picasso and Truth is a magisterial work: in many ways a summation. It retains its character as a spoken text; it is full of marvellous obiter dicta."—Alex Danchev, Times Higher Education

"Lovely to look at and better to read, T. J. Clark's Picasso and Truth: From Cubism to Guernica serves as a reliable introduction to the work of an essential 20th-century artist and a reassessment (and reordering) of his myth and legend. . . . Clark is a remarkably insightful looker and a writer of superb subtlety. Besides, it is beautifully—and aptly—illustrated."—Philip Martin, Arkansas Democrat-Gazette

"[A] tightly woven, scrupulously investigated, carefully considered argument. . . . Thrilling. . . . There are many wondrous and beautiful things about this volume, starting with the gorgeous array of pictures. . . . But more striking even than the physical book is the directness and intimacy of prose. . . . One of the best books Clark has ever written."—Wendy Lesser, Threepenny Review/Lesser Blog

"Picasso and Truth . . . is the best thing in a long time on this still contentious painter. Whether or not you agree with Clark's take on Picasso, you will not look at his paintings in quite the same way ever again."—John Banville, Observer

"[A] close pictorial reading through detailed and painstaking descriptions of pictorial elements elusively combined with primary sources. Lavishly illustrated, both in terms of artworks and photographic archival material his narrative becomes easier to follow, considering the elegant descriptions of colour and structure elements in Picasso's work."—Art History Supplement

"[A] serious accomplishment."—Fisun Guner, The Independent

"T. J. Clark's Picasso and Truth: From Cubism to Guernica marks a new summit in the mountain range of Picasso literature. . . . He walks the reader through analyses of paintings so searching and so mindful of overlapping intellectual frames of reference as to offer a new model of practice to critics and art historians. Its sophistication may make aspiring imitators despair. . . . Possibly only a reader who has tried to write about art will appreciate the achievement of thought and articulation in such a passage. The book contains many of them, along with sometimes inch-by-inch readings of pictures that startle by their ingenuity and aptness."—Kenneth Baker, San Francisco Chronicle

"Clark has written another exciting and insightful study. . . . Deeply informed. Clark is one of those thinkers . . . who contextualizes art history so coherently in the wider world that he is endlessly instructive."—Miriam Cosic, Australian

"T. J. Clark's new book Picasso and Truth: From Cubism to Guernica . . . immediately has my complete interest, if not my total heart. . . . Certainly no one disabused more notions of what was possible in painting than Pablo Picasso. And no one is quite as equipped to parse this disabuse as T. J. Clark. . . . Along with being a brilliant thinker, Clark is a greatly entertaining writer. . . . Clark has an acute sense of clarify coupled with a like sense of rhythm, cadence and measure. He doesn't just know how to think about this stuff, he knows how to get it down in a lively and gripping way. . . . This caliber of art appreciation and assessment entails a well-trained capacity for looking, and Clark is an exceptional art 'looker' and . . . a great art describer. . . . Clark is especially compelling on how Picasso treats space. . . . T. J. Clark reenergized the artist for me."—Guy Crucianelli, PopMatters

"An overall analysis of Picasso's art that is both scholarly and highly personal. . . . It must be one of the most intimidating challenges for any art historian to come up with new insights into Picasso's art, but Clark, through intuition and intellect, succeeds. . . . The key to this book's success is that the author responds to the art in the way Picasso probably intended, with his head and his heart. He is able to read these paintings from an objective descriptive stance but also with real feeling and empathy for the subject, a rare combination in art history."—Peter Murray, Irish Examiner

"Clark weaves his way through Picasso's process, nimbly leaps over the landmines of strict biographical interpretation, and arrives finally at a complex, challenging, but coherent concept of how Picasso found truth in a closed room and spent the rest of his life trying to find it again. . . . It's a major intellectual and emotional investment to follow Clark following Picasso's journey . . . but the payoff of seeing Guernica and Picasso through Clark's memory bank of interpretation is well worth the price. . . . Picasso and Truth: From Cubism to Guernica, despite (and sometimes because of) the enormity of its subject matter, leaves you with more than enough to believe in at the end."—Bob Duggan, Big Think

"Amazing. . . . Such a great piece of history."—Jonathan Lethem, Boston Globe

"This six-essay volume offers an intellectually rigorous, novel approach to the well-studied oeuvre of Picasso. Eschewing the historiographer's inclination to focus on biography, Clark's lectures rely on a primarily a pictorial framework to analyze Picasso's work. . . . Unparalleled scholarship."—Choice

"An exemplary lesson in art criticism and the significance of the act of looking."—Manuel Borja-Villel, Artforum

"Dazzling. . . . There have been numerous attempts in the past to associate Nietzsche with Picasso, but Clark's engagement is considerably richer and more sustained. . . . To make a philosophical text illuminate painting so evocatively, to such wonderful degrees, is a signal achievement."—Neil Cox, Burlington Magazine

"Clark is an electrifying lecturer in addition to being a superb writer on art, and the combination gives Picasso and Truth a cumulative force that is nothing short of remarkable. . . . [A] relentlessly original book."—Michael Fried, Common Knowledge

"[Clark's] analysis is to be welcomed and this volume contains much that can be drawn on over time."—Lucy Zhou, Cassone Art

"Picasso and Truth offers a breathtaking and original new look at the most significant artist of the modern era."—World Book Industry

"This book has changed how I will look at all paintings from now on. . . . It is difficult to describe this book as anything less than astounding. . . . In its astute observations, application of philosophical thought combined with a beautifully readable and engaging style, Picasso and Truth is, undoubtedly, Clark's."—Daniel Fraser, 3:AM Magazine

"No art historian in our time has had a greater impact both within the field and beyond it than T. J. Clark. Everything he writes matters in the most fundamental way. His latest book, Picasso and Truth, is no exception—superbly observed, beautifully argued, a tour de force of looking, thinking, and writing."—Michael Fried, author of The Moment of Caravaggio

"This is the Picasso book for which we have all been waiting. This work displaces biographical and psychological treatments of the artist from the past several decades, rendering them obsolete—and it forever changes art history in its present disposition."—Rosalind E. Krauss, Columbia University