A major history of the shtetl's golden age 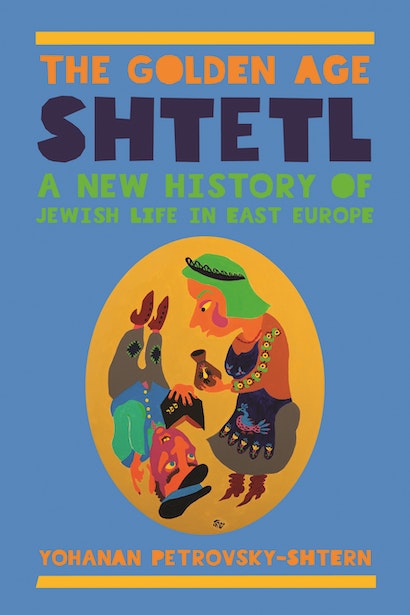 The shtetl was home to two-thirds of East Europe’s Jews in the eighteenth and nineteenth centuries, yet it has long been one of the most neglected and misunderstood chapters of the Jewish experience. This book provides the first grassroots social, economic, and cultural history of the shtetl. Challenging popular misconceptions of the shtetl as an isolated, ramshackle Jewish village stricken by poverty and pogroms, Yohanan Petrovsky-Shtern argues that, in its heyday from the 1790s to the 1840s, the shtetl was a thriving Jewish community as vibrant as any in Europe.

Petrovsky-Shtern brings this golden age to life, looking at dozens of shtetls and drawing on a wealth of never-before-used archival material. Illustrated throughout with rare archival photographs and artwork, this nuanced history casts the shtetl in an altogether new light, revealing how its golden age continues to shape the collective memory of the Jewish people today.

Yohanan Petrovsky-Shtern is the Crown Family Professor of Jewish Studies at Northwestern University.

"Petrovsky-Shtern . . . succeeds in vividly evoking a Jewish world that survived not merely in spite of its neighbors but in complex collaboration with them. . . . [A] moving feat of cultural reclamation and even, in its way, an act of quiet heroism."—Jonathan Rosen, New York Times Book Review

"[The Golden Age Shtetl] is a colorful, exhaustively researched study of a period when Jews were fully at home in shtetl life."—Publishers Weekly

"Petrovsky-Shtern turns some of the received knowledge about Jewish history on its head as he delves into rich, formerly classified primary sources delineating the evidence of Jewish economic power during the transition between the partitions of Poland by Russia (1772-1775) and the advent of the Russian military age, beginning in the 1840s, which brought xenophobia and nationalism. . . . Petrovsky-Shtern's book is lively and entertaining. A welcome study that is by turns picturesque and scholarly, startling and accessible."—Kirkus

"Yohanan Petrovsky-Shtern . . . has written a work that should be required reading for all those interested in, perplexed by or driven to madness by this subject. The produce of prodigious archival research, primary source materials and mastery of numerous languages, The Golden Age Shtetl tells a history that has rarely been transmitted in scholarly books, around the dinner table or even in Yiddish literature."—Jonathan Brent, Moment Magazine

"If earlier accounts of the shtetl, such as Zborowski's Life Is With People, described it as 'not a place but a state of mind,' then Petrovsky-Shtern's work restores a physicality or material reality to the shtetl. Here are a series of locations with a real history, as opposed to a 'timeless existence.' And, along with other modern historians, Petrovsky-Shtern gives us a context to understand the places where many of our grandparents and great-grandparents came from."—Aaron Howard, Jewish Herald Voice

"The vibrancy of shtetl life in the days before it was destroyed by the Russian state comes through vividly. This book should appeal to anyone interested in Jewish or Eastern European history."—Frederic Krome, Library Journal

"In The Golden Age Shtetl, Petrovsky-Shtern draws on thousands of previously classified archival sources from six countries, in seven languages, to provide a vivid account of life in the villages and towns that came to be called shtetls. . . . The author makes a compelling case that between 1790 and 1840, the shtetl was a far different place from its late-19th-century successor, which is now universally associated with poverty and pogroms."—Glenn C. Altschuler, Jerusalem Post

"[T]he amount of detail Petrovsky-Shtern uncovered is amazing. . . . The book's combination of history and anthropology worked extremely well. . . . Petrovsky-Shtern has produced something new and original. Anyone interested in the history of Eastern European Jews would do well to pick up a copy."—Rabbi Rachel Esserman, Reporter

"[H]ighly readable and rich with observed detail. . . . Petrovsky-Shtern gives us something even more precious—a glimpse of the shtetl at its moment of greatest glory."—Jonathan Kirsch, Jewish Journal

"Using a wide variety of archival sources, Perovsky-Shtern not only stakes his claim to what the shtetl is (at least during the historical period he calls the 'golden age of the shtetl,' roughly the first half of the 19th century), but also brings it to glorious, colorful life."—Jeremy Dauber, Commentary

"The Golden Age Shtetl is a fascinating and informative book and Yohanan Petrovsky-Shtern has made it thoroughly readable, while still maintaining its academic veracity, by selecting some wonderful examples to illustrate his story of a period which, he claims, was indeed a Golden Age for Jews in the area he focuses on. His anecdotes, drawn from court records, state archives, and other sources, are always relevant."—Jim Burns, Northern Review of Books

"In a tour de force of archival research, Petrovsky-Shtern re-creates life in the shtetls in all its amazing richness."—Foreign Affairs

"The Golden Age Shtetl should . . . fascinate the curious lay readers and scholarly specialist alike. Its strength is that it neither romanticizes nor vilifies the shtetl, and conforms to no ideological agenda; instead, shtetl Jews emerge from its numerous anecdotes as simply and deeply human."—Andrew N. Koss, Mosaic Magazine

"Petrovsky-Shtern's chapters on the vital economies of smuggling and alcohol production and distribution, and on the use of violence in shtetl society and Jewish crime and Russian justice, are full of mesmerizing stories and are gratifying to all who have long suspected that there was something not quite right with the conventional portrayal of the shtetl Jews as sheep. Where there are sheep there are wolves, and Petrovsky-Shtern shows that plenty of the wolves were Jewish. . . . [A] hugely entertaining, informative work."—Susanne Klingenstein, Weekly Standard

"Without a hint of nostalgia or bittersweet yearning, The Golden Age Shtetl conjures a place and time that most of us didn't even know we'd lost."—Norman Ravvin, Canadian Jewish News

"This highly entertaining and often surprising volume recasts our understanding of the contexts of Jewish life in Eastern Europe."—Francois Guesnet, History Today

"Anyone interested in Eastern European History and the shtetl will be fascinated by this lively book that is as accessible to the general reader as it is valuable to the academic."—David Tesler, Association of Jewish Libraries

"Exuberant and revolutionary, founded on extensive archival scholarship in multiple languages, this book is fundamental for understanding the authentic significance of the predominately Jewish market towns known in Yiddish as shtetls, which once dotted the map of Eastern Europe. . . . The book is colorfully written and documented with mordant humor and cynical humanism. Reading this book reveals the vibrant heart of Eastern European Jewish civilization, whose traces can still be seen among the descendants of millions of Eastern European Jewish immigrants, compelled to leave by the economic decline resulting from czarist Russian policies. An outstanding work of scholarship about the fabric of life in a multiethnic region."—Choice

"The Golden Age Shtetl is a gem of a book; it is beautifully written, informative, approachable, funny and deserves to be very widely read."—Charles H. Middleburgh, Charles Middleburgh blog

"The text is fluently written; the author maintains the balance between vibrant, almost anecdotal narration and solid methodology relying on the numbers derived from historical sources. As a result, the book is exceptionally colourful - not only due to the richness and vividness of the stories contained within but also because of its visual aspect."—Wojciech Kosior, The Polish Journal of the Arts and Culture

"The Golden Age Shtetl substantially enriches our understanding of both the Eastern European small town and Jewish daily life in the early nineteenth century. Mining a treasure trove of previously unused archival data, Petrovsky-Shtern brings to life a culture normally depicted only in its decline."—Jeffrey Veidlinger, Journal of Modern History

"Aligned throughout with rare archival photographs and artwork, this more than nuanced history casts theshtetl itself in an altogether new light; revealing how its influential golden age continues to shape the collective memory of Jewish people to the present day."—David Marx Book Reviews

"This book ushers in the golden age of shtetl scholarship. Challenging the homogenized and sanitized images of East European Jewry that followed its near obliteration, Petrovsky-Shtern combs the archives to reveal how the Jews who lived in these market towns enjoyed great opportunities amid the political tensions between Poland and Russia. A book to be grateful for."—Ruth R. Wisse, author of No Joke: Making Jewish Humor

"The Golden Age Shtetl turns upside down the nostalgic image of the shtetl as a decaying Jewish village, presenting the historical shtetl as a place where Jews enjoyed prosperity and stability. Drawing on huge archival evidence, this pathbreaking study challenges our historical mind and provides an innovative account of the Jewish experience in nineteenth-century Russia."—Israel Bartal, author of The Jews of Eastern Europe, 1772-1881

"The shtetl, home of most East European Jews for several centuries, has been the subject of endless romantic re-creations in the American Jewish corpus. Finally a serious historian of Russian Jewry gives us a well-documented but still lively and fascinating picture of this lost world. A must-read for anyone seeking to understand the immediate Jewish past."—Art Green, Brandeis University and Hebrew College

"An inspiring and rich study. In this highly innovative book, Petrovsky-Shtern demonstrates how the shtetl in early nineteenth-century Russia constituted a unique context for the unfolding of a proud, resilient, and sustainable Jewish community."—François Guesnet, University College London

"The shtetl comes to life in all its complexity, vitality, and beauty in Petrovsky-Shtern's new book. Like an archaeologist who uncovers and brings to light one layer after another of a long-gone civilization, he draws on previously untapped archival sources to reconstruct a crucial part of Jewish history."—Serhii Plokhy, Harvard University