Few direct clues exist to the everyday lives and beliefs of ordinary Jews in antiquity. Prevailing perspectives on ancient Jewish life have been shaped largely by the voices of intellectual and social elites, preserved in the writings of Philo and Josephus and the rabbinic texts of the Mishnah and Talmud. Commissioned art, architecture, and formal inscriptions displayed on tombs and synagogues equally reflect the sensibilities of their influential patrons. The perspectives and sentiments of nonelite Jews, by contrast, have mostly disappeared from the historical record. Focusing on these forgotten Jews of antiquity, Writing on the Wall takes an unprecedented look at the vernacular inscriptions and drawings they left behind and sheds new light on the richness of their quotidian lives.

Just like their neighbors throughout the eastern and southern Mediterranean, Mesopotamia, Arabia, and Egypt, ancient Jews scribbled and drew graffiti everyplace — in and around markets, hippodromes, theaters, pagan temples, open cliffs, sanctuaries, and even inside burial caves and synagogues. Karen Stern reveals what these markings tell us about the men and women who made them, people whose lives, beliefs, and behaviors eluded commemoration in grand literary and architectural works. Making compelling analogies with modern graffiti practices, she documents the overlooked connections between Jews and their neighbors, showing how popular Jewish practices of prayer, mortuary commemoration, commerce, and civic engagement regularly crossed ethnic and religious boundaries.

Illustrated throughout with examples of ancient graffiti, Writing on the Wall provides a tantalizingly intimate glimpse into the cultural worlds of forgotten populations living at the crossroads of Judaism, Christianity, paganism, and earliest Islam.

Karen B. Stern is assistant professor of history at Brooklyn College of the City University of New York. She is the author of Inscribing Devotion and Death: Archaeological Evidence for Jewish Populations of North Africa. 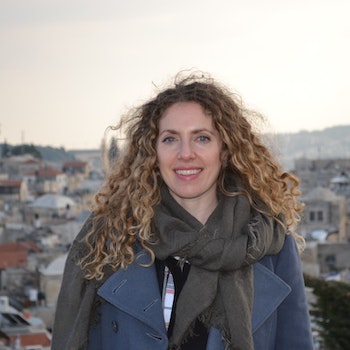 "In this fascinating study, Stern documents ancient Jewish graffiti from around the Roman world, and explores the ways in which graffiti were used as a means of expression in contexts ranging from tombs and synagogues to public spaces such as theaters and hippodromes."—Jodi Magness, University of North Carolina at Chapel Hill

"Stern enables us to glimpse into the lives and concerns of ordinary Jews who were eager to leave their mark in public and private spaces, tagging their environment with personal messages and symbols. Her book is not only a great contribution to the study of ancient Jewish literacy and the relation between image and text but also exposes individual interactions with space, commemoration, and personal identity."—Catherine Hezser, SOAS University of London

"This beautifully written and well-researched book explores an almost uncharted world, that of the informal messages etched and painted by Jews of antiquity onto a variety of media. They constitute a wonderful contrast to the dry tomes of official historiography and the conventional formulae of monumental inscriptions, getting us closer to the everyday thoughts and feelings of their perpetrators."—Robert G. Hoyland, New York University

"In this illuminating book, Stern shows how the Jews of late antiquity engaged in the same kinds of markings of space for ritual, social, and individual reasons as did their non-Jewish contemporaries. At the same time, she discovers subtle ways Jewish practices set them off from their neighbors."—Hayim Lapin, author of Rabbis as Romans: The Rabbinic Movement in Palestine, 100–400 CE

"Truly impressive. Stern's book will be of profound importance to all scholars of ancient Judaism."—Rachel Neis, author of The Sense of Sight in Rabbinic Culture: Jewish Ways of Seeing in Late Antiquity