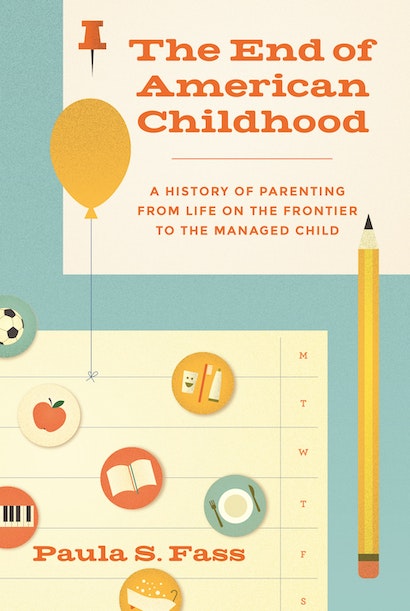 The End of American Childhood takes a sweeping look at the history of American childhood and parenting, from the nation’s founding to the present day. Renowned historian Paula Fass shows how, since the beginning of the American republic, independence, self-definition, and individual success have informed Americans’ attitudes toward children. But as parents today hover over every detail of their children’s lives, are the qualities that once made American childhood special still desired or possible? Placing the experiences of children and parents against the backdrop of social, political, and cultural shifts, Fass challenges Americans to reconnect with the beliefs that set the American understanding of childhood apart from the rest of the world.

Fass examines how freer relationships between American children and parents transformed the national culture, altered generational relationships among immigrants, helped create a new science of child development, and promoted a revolution in modern schooling. She looks at the childhoods of icons including Margaret Mead and Ulysses S. Grant—who, as an eleven-year-old, was in charge of his father’s fields and explored his rural Ohio countryside. Fass also features less well-known children like ten-year-old Rose Cohen, who worked in the drudgery of nineteenth-century factories. Bringing readers into the present, Fass argues that current American conditions and policies have made adolescence socially irrelevant and altered children’s road to maturity, while parental oversight threatens children’s competence and initiative.

Showing how American parenting has been firmly linked to historical changes, The End of American Childhood considers what implications this might hold for the nation’s future.

Paula S. Fass is professor of the Graduate School and the Margaret Byrne Professor of History Emerita at the University of California, Berkeley. The author of Kidnapped and Children of a New World, she recently edited The Routledge History of Childhood in the Western World. Fass lives in Berkeley, California.

"The material Fass provides on America in the 19th and early-20th centuries is important, and highly relevant to the really essential issues driving parenting behavior in our day."—Judith Warner, New York Times Book Review

"The End of American Childhood is a worthwhile and enlightening book, and [Fass] comes to some persuasively tough conclusions."—Daniel Akst, Wall Street Journal

"A wide-ranging and stimulating history of childhood and parenting in the U.S. … [Fass] illustrates her points with examples from the childhoods of figures both famous (Ulysses S. Grant and Margaret Mead) and obscure (Rose Cohen, a 19th-century child seamstress). She concludes by noting that with the insecurities of the global economy, adolescents put off independence, particularly financial independence, for far longer than in the past two centuries, but that independence is still their eventual goal. Her work provides an invaluable perspective on an important topic."—Publishers Weekly

"A comprehensive investigation of how Americans have raised their children. . . . Fass provides ample historical and scientific evidence to support her findings, giving readers a methodical, meticulous accounting of childhood in America over the past 200 years."—Kirkus

"[An] enlightening book…. Our instincts tell us to do more, not less, to protect our children from the cruel 21st-century world.The End of American Childhoodis a corrective to that outlook."—Isabel Berwick, Financial Times

"Childhood in the U.S. has been distinct in the Western world: the relations between generations were more flexible, provided choices, and encouraged children's independence. Historian Fass uses autobiographies, parents' advice, and child welfare literature to paint a portrait of children who, regardless of class, gender, ethnicity, or race, shouldered family responsibilities from the pioneers on the frontier to immigrant children working in factories a century later. . . . Her overview on past parents' fear for children's health and survival serves as a sobering reminder to ‘helicopter' parents and ‘tiger moms.'"—Choice

"Fass's impressive and readable synthesis brings historical discussions of youth and children up to date, while making a compelling case for the role of historical understanding in today's discussions about our youth."—Jodi Vandenberg-Daves, Journal of the History of Childhood and Youth

"Fass' work is impeccably researched and elegantly written, and has a depth and breadth that can only come from years of careful and deliberate thinking in the course of a rich and productive career. . . . A cogent and dynamic historical analysis."—Jane Eva Baxter, Childhood in the Past

"For anyone seeking a comprehensive study of American parenting and childhood over the past two centuries, Fass’s new book delivers. It manages to cover two hundred years of history in just six, well-articulated chapters."—Claire L. Halstead, Historical Studies in Education

"Why have we reached ‘the end of American childhood'? What explains the surge in ‘helicopter parenting'? A virtuoso historian, Paula Fass offers convincing answers. With vivid examples and persuasive arguments, she takes us on a memorable tour looking at two centuries of parent-child relations. A pathbreaking interpretation of American childhood, her book will attract all those concerned with contemporary families."—Viviana A. Zelizer, author of Economic Lives

"Childhood is primal and no one has looked at it more deeply or clearly than Paula Fass. In her book The End of American Childhood, our hopes, obsessions, and mistakes are laid bare. The way we have raised our children from Revolutionary times to the present perfectly mirrors our society and Fass is a terrific and surprising guide. She brilliantly shows us how we got to where we are today—starting in childhood. This is nothing less than a modern-day Rosetta stone for understanding America."—Lenore Skenazy, author of Free-Range Kids

"This richly detailed account of the continuities and variations in Americans' childrearing values and methods puts our contemporary anxieties and challenges in historical perspective."—Stephanie Coontz, author of The Way We Never Were: American Families and the Nostalgia Trap

"This ambitious book sketches major developments in the history of American childhood and parenting from 1800 to the present. Fass shows, with striking insights, that a distinctive American approach to children runs through the entire chronology covered, despite major changes from one period to the next."—Peter Stearns, author of World History in Brief

"The End of American Childhood provides a brisk account of the histories of childhood and childrearing from the Revolution to the present. It unifies these stories with a single thread—the way that Americans raised their children with a sense of independence. With a strong and meaningful point of view, this book brings a historical consciousness to contemporary thought and policy."—James Marten, Marquette University