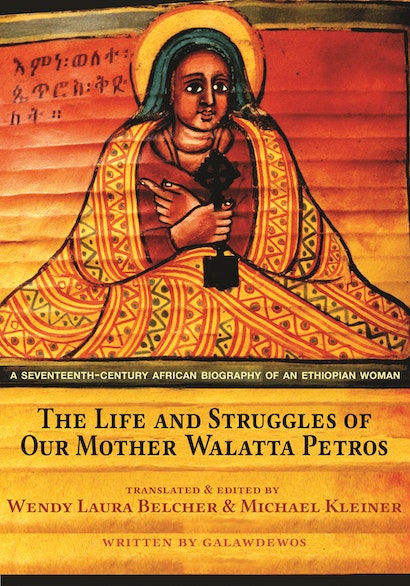 This is the hardcover scholarly edition of the award-winning English translation of the earliest-known book-length biography of an African woman, and one of the few lives of an African woman written by Africans before the nineteenth century. As such, it provides an exceedingly rare and valuable picture of the experiences and thoughts of Africans, especially women, before the modern era. It is also an extraordinary account of a remarkable life—full of vivid dialogue, heartbreak, and triumph.

The Life and Struggles of Our Mother Walatta Petros (1672) tells the story of an Ethiopian saint who led a successful nonviolent movement to preserve African Christian beliefs in the face of European protocolonialism. When the Jesuits tried to convert the Ethiopians from their ancient form of Christianity, Walatta Petros (1592–1642), a noblewoman and the wife of one of the emperor’s counselors, risked her life by leaving her husband, who supported the conversion effort, and leading the struggle against the Jesuits. After her death, her disciples wrote this book, praising her as a friend of women, a devoted reader, a skilled preacher, and a radical leader. One of the earliest stories of African resistance to European influence, this biography also provides a picture of domestic life, including Walatta Petros’s life-long relationship with a female companion.

Richly illustrated with dozens of color illustrations from early manuscripts, this groundbreaking volume provides an authoritative and highly readable translation along with an extensive introduction. Other features include a chronology of Walatta Petros’s life, maps, a comprehensive glossary, and detailed notes on textual variants.

Wendy Laura Belcher is associate professor in the Department of Comparative Literature and the Center for African American Studies at Princeton University. She is the author of Abyssinia's Samuel Johnson and Honey from the Lion: An African Journey. Michael Kleiner is a historian of Ethiopia and a translator. He has taught at the universities of Göttingen, Marburg, and Hamburg, as well as at Addis Ababa University.

"By 2050, Africans will constitute around a third of the world's Christian population, roughly a billion people, and over a hundred million of those will live in Ethiopia. As we confront that new reality, the need to rediscover those African cultural and spiritual roots becomes imperative. The story of Walatta Petros is a wonderful contribution to this task."—Philip Jenkins, Books & Culture

"This richly informative book is unexpected in many ways. . . . In following the dramatic main narrative, we learn about the customs and faith of the great Ethiopian church, all of which is profoundly important for understanding that tradition as it exists today."—Philip Jenkins, Christian Century

"A significant contribution to the study of African literature and the early history of African resistance to European expansion into the continent."—Neal W. Sobania, African Studies Review

"The editors and press have produced [this text] beautifully. . . . The Life and Struggles of Our Mother Walatta Petros is an important text on its own, presented in an exemplary fashion, and worthy of attention by any interested in early colonialism in Africa and the biographies of female religious in Africa and beyond. Belcher and Kleiner have done a great service in making this literature accessible in a responsible and scholarly form to a wider readership."—Andrew Crislip, Biography

"Rarely have I read a text that offered as many possibilities as this story of the seventeenth-century Ethiopian saint Walatta Petros, a multidimensional woman worthy of study. Belcher and Kleiner have given a new generation of readers access to this full biography of a formidable resister to European colonization, as well as keen insight into her communities and relationships with women."—Salamishah Tillet, University of Pennsylvania

"The revolutionary Ethiopian saint Walatta Petros finally has the translation into English that she deserves. Faithful, well-researched, and accessible, this volume brings to light a fascinating example of women's leadership in the early modern world."—Getatchew Haile, College of Saint Benedict and Saint John's University

"Wendy Belcher and Michael Kleiner's annotated English translation of the biography of Walatta Petros combines rigorous textual scholarship with a fresh, vivid, and intimate portrait of the saint in her context. This stimulating volume will challenge general readers' view of Africa as 'the land of orality.'"—Alessandro Bausi, University of Hamburg

"This beautifully translated biography tells the fascinating story of an influential seventeenth-century Ethiopian leader. Based on meticulous scholarship using the oldest manuscripts, and including an accessible introduction, color illustrations, and helpful footnotes, this is a significant contribution to Ethiopian and women's studies as well as religious history."—Alice Ogden Bellis, Howard University School of Divinity

"This book provides an important contribution to the history of elite African women and to the scholarship on Ethiopia. The text reads fluently, the critical apparatus is very impressive, and the introduction does everything we could ask an introduction to do."—John K. Thornton, Boston University

"This eminently readable translation of a neglected and important work is a major contribution to scholarship, beautifully framed by the introduction and the book's other features. Taken together, they provide almost a reference work on premodern Ethiopia, full of rich byways through which we are led with erudition and clarity."—Samantha Kelly, Rutgers University

Instructors: Readers can read the whole book or can leap right into the story of the saint’s life, which runs from pages 77 to 272 (with lots of notes, so in effect about 100 pages of reading). Instructors may think about assigning the Preface (pp. xvii-xxxiv), to orient the students, and the section titled “The Translation of the Life-Struggles of Wallata Petros” (pp. 77-272).