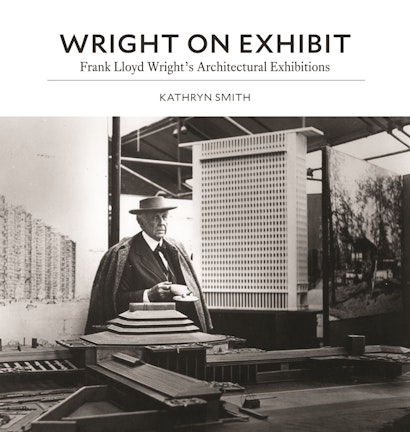 More than one hundred exhibitions of Frank Lloyd Wright’s work were mounted between 1894 and his death in 1959. Wright organized the majority of these exhibitions himself and viewed them as crucial to his self-presentation as his extensive writings. He used them to promote his designs, appeal to new viewers, and persuade his detractors. Wright on Exhibit presents the first history of this neglected aspect of the architect’s influential career.


Drawing extensively from Wright’s unpublished correspondence, Kathryn Smith challenges the preconceived notion of Wright as a self-promoter who displayed his work in search of money, clients, and fame. She shows how he was an artist-architect projecting an avant-garde program, an innovator who expanded the palette of installation design as technology evolved, and a social activist driven to revolutionize society through design. While Wright’s earliest exhibitions were largely for other architects, by the 1930s he was creating public installations intended to inspire debate and change public perceptions about architecture. The nature of his exhibitions expanded with the times beyond models, drawings, and photographs to include more immersive tools such as slides, film, and even a full-scale structure built especially for his 1953 retrospective at the Guggenheim Museum. Placing Wright’s exhibitions side by side with his writings, Smith shows how integral these exhibitions were to his vision and sheds light on the broader discourse concerning architecture and modernism during the first half of the twentieth century.


Wright on Exhibit features color renderings, photos, and plans, as well as a checklist of exhibitions and an illustrated catalog of extant and lost models made under Wright’s supervision.

"The care, audacity, and originality with which Wright orchestrated the public presentation of his revolutionary architecture from start to finish . . . is laid out with exceptional thoroughness in Kathryn Smith's Wright on Exhibit. . . . An intriguing treatise on career development, and [it] is so illuminatingly detailed that it gives a richer portrait of Wright than many full-length biographies."—Martin Filler, New York Review of Books

"Smith refutes the public and historical notion of Wright as a self-promoter by drawing on evidence of his being an innovator and a social activist who sought divergent routes to publicizing his work for the sake of artistic progress and social improvements. Smith illuminates the multimedia component of Wright's work . . . to shed light on the broader discourse of architecture and design as it approaches a new age of modernity."—Metropolis

"In her book Wright on Exhibit (Princeton University Press), Kathryn Smith shows how Wright used exhibitions to keep his reputation alive . . . A study focused entirely on an architect's exhibitions, as Smith has provided, might seem specific to the point of narrowness—and for another architect perhaps it might be. But exhibitions and self-promotion kept the Wright flame alive."—Will Wiles, Apollo Magazine

"Kathryn Smith takes us on a comprehensive tour through Wright's exhibitions, from his first at the Chicago Architectural Club of 1894 to New York’s Metropolitan Museum of Art in 1959. The details are fascinating, especially because of what they tell about the inclusions in those presentations and why they were chosen. . . . Smith’s book is a long-needed chronicle of changes in curatorial practice and technology, particularly at New York’s Museum of Modern Art (MoMA), which mounted six solo exhibitions on Wright between 1932 and 1953, and eight others in which he appeared during this time."—Anthony Paletta, Architectural Record

"Based on several years of exhaustive research, [this book] is more than a history of Wright-themed exhibitions, for [Smith] re-examines his entire career in their light, revealing how intertwined they were with his practice."—David G. De Long, Burlington Magazine

"Making expert use of the rich archival holdings of the Frank Lloyd Wright Foundation and many other sources, Kathryn Smith has produced a compelling account of Wright’s negotiations and preparations for a career-long series of exhibitions of his work, mainly in the United States, but also in Europe. . . . Wright on Exhibit admirably fills a lacuna in Wright studies, and its chapters are fascinating in their accounts of the difficulties and successes surrounding the staging of these important events during his lifetime."—Joseph M. Siry, Journal of the Society of Architectural Historians

"This invaluable book fills a huge lacuna in our understanding of Wright and his work. In Smith's hands, each exhibition presented here becomes a self-contained story that contributes to the larger narrative of Wright's relentless determination to advance his ideas."—Jack Quinan, author of Frank Lloyd Wright's Martin House: Architecture as Portraiture

"Meticulously researched and well written. This book will be a foundation for future scholarship."—Richard Cleary, author of Merchant Prince and Master Builder: Edgar J. Kaufmann and Frank Lloyd Wright