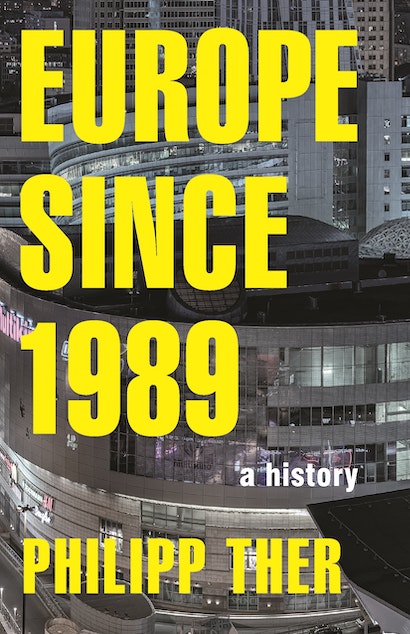 The year 1989 brought the fall of the Berlin Wall and the collapse of communism in Eastern Europe. It was also the year that the economic theories of Reagan, Thatcher, and the Chicago School achieved global dominance. And it was these neoliberal ideas that largely determined the course of the political, economic, and social changes that transformed Europe—both east and west—over the next quarter century. This award-winning book provides the first comprehensive history of post-1989 Europe.

Philipp Ther—a firsthand witness to many of the transformations, from Czechoslovakia during the Velvet Revolution to postcommunist Poland and Ukraine—offers a sweeping narrative filled with vivid details and memorable stories. He describes how liberalization, deregulation, and privatization had catastrophic effects on former Soviet Bloc countries. He refutes the idea that this economic “shock therapy” was the basis of later growth, arguing that human capital and the “transformation from below” determined economic success or failure. Most important, he shows how the capitalist West’s effort to reshape Eastern Europe in its own likeness ended up reshaping Western Europe as well, in part by accelerating the pace and scope of neoliberal reforms in the West, particularly in reunified Germany. Finally, bringing the story up to the present, Ther compares events in Eastern and Southern Europe leading up to and following the 2008–9 global financial crisis.

A compelling and often-surprising account of how the new order of the New Europe was wrought from the chaotic aftermath of the Cold War, this is essential reading for understanding Europe today.

Philipp Ther is professor of Central European history and director of the Institute of European History at the University of Vienna.

"[Ther's] central thesis demands serious consideration. He argues that a ‘neoliberal train,' put on track in Margaret Thatcher's Britain and Ronald Reagan's United States, began ‘to cross Europe in 1989.' He says he uses neoliberalism ‘as a neutral, analytical term,' and rightly distinguishes between its intellectual history and the specific social and political circumstances of its implementation."—Timothy Garton Ash, New York Review of Books

"Bound to become the standard work for Europe's transformation since 1989."—Frank Bösch, H-Net

"Recommended, not just the usual and interesting to see ‘the West' treated as the periphery."—Tyler Cowen, Marginal Revolution

"[Europe since 1989] . . . is well-documented. It can be recommended to general readers and students of postcommunist history in Europe."—Choice

"The all round general essence of what is written . . . makes for more than robust reading. Not to mention, profound common sense. . . . [An] exceedingly well-researched book."—David Marx, David Marx Book Reviews

"Ther’s historical survey is bold in its scope, innovative in its approach, [and] lively in its style."—Stefan Auer, International Affairs

"This is a great and original book. It offers keen personal observations of a wide range of European countries across several tumultuous decades, and brings forward new facts and perspectives. It will remain the history of the European transition from communism to capitalism for many years to come."—Mitchell A. Orenstein, University of Pennsylvania

"This brilliant book is a masterpiece of contemporary history and far and away the best thing that's been published about the huge historical turn that began in Europe in 1989. It instantly becomes the go-to book for understanding the period, totally supplanting previous accounts. Philipp Ther makes the events of 1989, and what followed, not simply a history of Eastern Europe, but a history of Europe as a whole, with both east and west entranced, and partly blinded, by the neoliberal imperative."—Larry Wolff, New York University

"This book features a lively and imaginative intellect on every page. But Philipp Ther's erudition is also extraordinary; he ranges with authority over the entirety of Europe in prose that sparkles and flows effortlessly. Europe since 1989 provokes, informs, and entertains, and there is not a dull moment in the entire book."—John Connelly, University of California, Berkeley

"Philipp Ther provides a richly detailed history of postcommunist Europe, employing key comparisons enhanced by wonderful personal knowledge of many locations. At a time when the public seems finally ready to question the neoliberal orthodoxy of the past few decades, Ther's narrative offers some major evidence."—Charles S. Maier, Harvard University