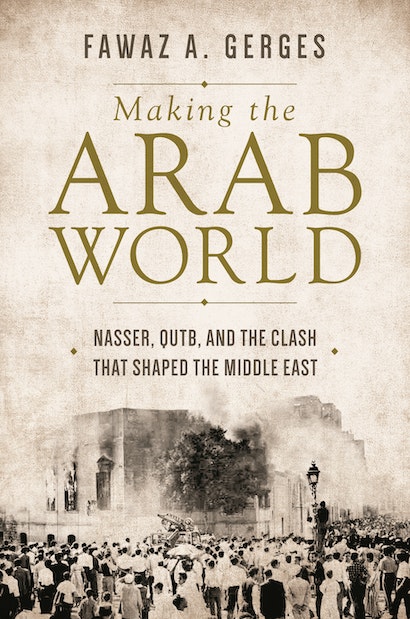 In 2013, just two years after the popular overthrow of Hosni Mubarak, the Egyptian military ousted the country’s first democratically elected president—Mohamed Morsi of the Muslim Brotherhood—and subsequently led a brutal repression of the Islamist group. These bloody events echoed an older political rift in Egypt and the Middle East: the splitting of nationalists and Islamists during the rule of Egyptian president and Arab nationalist leader Gamal Abdel Nasser. In Making the Arab World, Fawaz Gerges, one of the world’s leading authorities on the Middle East, tells how the clash between pan-Arab nationalism and pan-Islamism has shaped the history of the region from the 1920s to the present.

Gerges tells this story through an unprecedented dual biography of Nasser and another of the twentieth-century Arab world’s most influential figures—Sayyid Qutb, a leading member of the Muslim Brotherhood and the father of many branches of radical political Islam. Their deeply intertwined lives embody and dramatize the divide between Arabism and Islamism. Yet, as Gerges shows, beyond the ideological and existential rhetoric, this is a struggle over the state, its role, and its power.

Based on a decade of research, including in-depth interviews with many leading figures in the story, Making the Arab World is essential reading for anyone who wants to understand the roots of the turmoil engulfing the Middle East, from civil wars to the rise of Al-Qaeda and ISIS.

Fawaz A. Gerges is professor of international relations and Emirates Chair in Contemporary Middle East Studies at the London School of Economics and Political Science. He is the author of several acclaimed books, including ISIS: A History (Princeton), The New Middle East, and The Far Enemy.

"A highly knowledgeable history that is helpful in explaining recent developments in Egypt and elsewhere in the Middle East."—Kirkus

"Gerges . . . writes with brilliant insight about these two competing forces in the Arab world: pan-nationalism and pan-Islamist movements."—Steve Donoghue, The National

"This is an important work of journalism as well as history."—Richard Spencer, The Times

"In Making the Arab World, Fawaz Gerges traces the intertwining biographies and intellectual trajectories of these two titans of Egyptian history. The result is a fascinating and deeply researched revisionist history—one that sheds light on the forces still roiling in Egypt under the surface calm of Sisi’s rule. Today, Nasser and Qutb are remembered as representatives of opposing visions for Egypt. Gerges, however, tells a far more interesting and complicated story about the relationship between the two men and the movements they helped shape. Behind their competing ideologies were flawed individuals with complex and sometimes contradictory motivations. Gerges’ reexamination of a crucial period in Egyptian history usefully illustrates how all ideologies—even the ones that seem most fixed and unyielding—are in fact fluid and contingent on events."—Shadi Hamid, Foreign Affairs

"At 400-plus pages, the new book from Fawaz Gerges, professor of international relations at the London School of Economics, is a weighty tome drawing on more than 12 years of research but it is also accessible and refreshing."—Gareth Smyth, Arab Weekly

"Making the Arab World: Nasser, Qutb, and the Clash that Shaped the Middle East is a significant contribution to Middle East studies. It draws together incredible research to tell an important story about two figures who had a great impact on life in their own historical moment and beyond."—Caleb Elfenbein, American Academy of Religion

"This dual biography of two Egyptians, Gamal Abdel Nasser and Sayyid Qutb, shows clearly that the conflagration in Middle Eastern lands was kindled a long time ago. In the face of a complex civilizational dynamic, Gerges gives the reader the fundamental answer: What we have intervened in is an intra-Islamic war between the secular nationalists and the Islamists; or, in the words of one of Gerges’s Islamist interviewees, a war between ‘Islam versus apostasy.’"—Lima Simms, Law and Liberty

"Fawaz Gerges gives a novel, nuanced, and extremely interesting view of the relationship between the hero of Arab nationalism, Gamal Nasser, and the main intellectual of the Muslim Brotherhood Sayyid Qutb. I enjoyed reading it both from a pleasure point of view as well as from an informative one. It is highly readable and informative."—Karim Mezran, Atlantic Council

"To understand the current environment within Egypt and its neighboring countries, Gerges provides both an analytical as well as empirical framework to assist in understanding the difficulties between nationalism and activist Islam."—Lt. Col. Stephen Harvey, U.S. Army, Retired, Military Review

"What we have is a solid, clearly written work of scholarship by a talented and experienced historian of the Middle East. Over a decade in the writing, it is an important contribution to the growing number of books that aim to explicate Islamism’s dialectical relationship with the Arab state."—John Calvert, Middle East Journal

"Not since Richard P. Mitchell’s The Society of the Muslim Brothers and Nazih Ayubi’s equally definitive Political Islam has the scholarly community been treated to such a comprehensive and thought-provoking work."—Ghada Hashem Talhami, Middle East Policy Council

"Interviewing close to a hundred elderly comrades for a new history of the relationship between the Egyptian state and the Islamists, Fawaz Gerges, a longtime professor at the London School of Economics, breathes new life into one of the most formative periods in the history of post-colonial Egypt. It is a good story, worthy not only of a fine historian but providing rich material for a novelist or a playwright who might take interest in digging through the ruins of decolonization and the rubble of dystopia."—Yoav Di-Capua, Los Angeles Review of Books

"In his sweeping and powerful new book Making the Arab World, Fawaz Gerges traces the genesis of this ill will to the show-down, in Egypt, between the Muslim Brotherhood and the Free Officers in 1952–54."—John Calvert, Bustan

"The modern history of Egypt and the Middle East has been profoundly shaped by the interaction between two deeply rooted forces—nationalism and political Islam. Focusing on two outsize personalities who personified these currents, Gamal Abdel Nasser and Sayyid Qutb, and drawing on a decade of research, including many interviews, Fawaz Gerges shows the complex, not always antagonistic, relationship between these powerful and enduring political realities."—William B. Quandt, author of Peace Process: American Diplomacy and the Arab-Israeli Conflict since 1967

"Fawaz Gerges is our most perceptive and level-headed analyst of the rise of Muslim extremism. In a field strewn with glib generalizations and sometimes colored by mere bigotry, he insists on giving us context and concentrating on specifics, which he presents in a lively and engaging style. Here he steps back to reveal the full sweep of a key conflict fought throughout the Middle East over the past seventy years between a secular-leaning, authoritarian nationalism and a theocratic irredentism. This is an essential book."—Juan Cole, author of The New Arabs: How the Millennial Generation Is Changing the Middle East

"Drawing on decades of interviews, Fawaz Gerges gives us a novel, nuanced, and revealing picture of the relationship between the Egyptian nationalist hero Gamal Abdel Nasser and his one-time ally and ultimate nemesis in the Muslim Brotherhood, Sayyid Qutb. The book offers a fresh interpretation of the modern histories of both the Arab nationalist and Islamist movements—one that will profoundly reshape conventional wisdom about politics in the Arab world."—Lisa Anderson, former president of the American University in Cairo

"A superb work of original scholarship that feeds into a gripping narrative on the fault line between Arab nationalists and Islamists that shaped the modern history of the Middle East. For anyone who wants to make sense of the tangled politics of the region today, there is no better guide."—Avi Shlaim, author of The Iron Wall: Israel and the Arab World

"A major achievement, this impeccably researched book contributes significantly to our understanding of Arab and Islamic politics, supplementing and correcting much of it."—James Piscatori, Australian National University

"Making the Arab World is distinctive not only in its much-needed focus on the interaction between Nasserism and Egyptian Islamism, but also in the degree to which the author had access to the views of people who were and are directly involved in the events."—John Voll, author of Islam: Continuity and Change in the Modern World