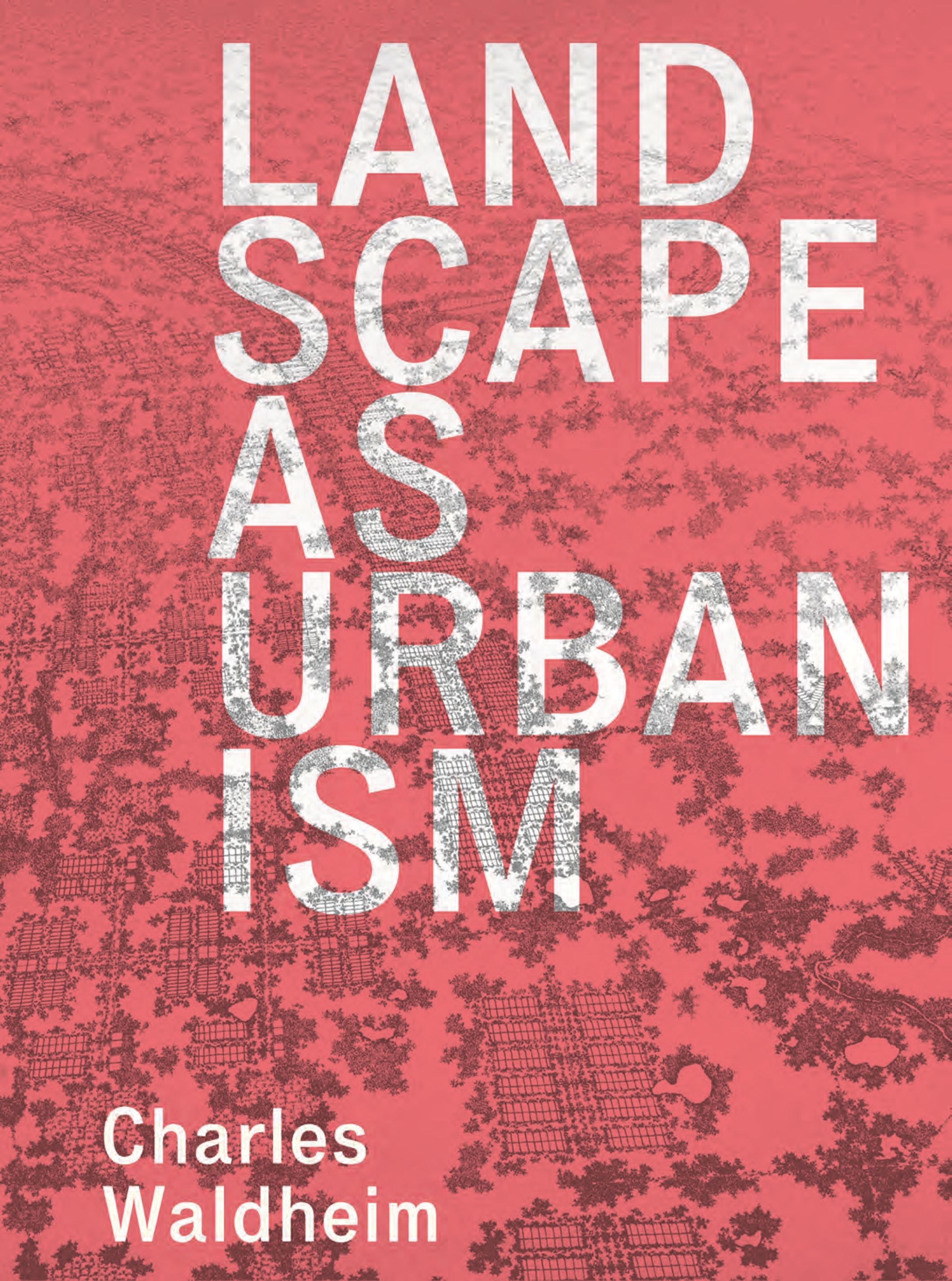 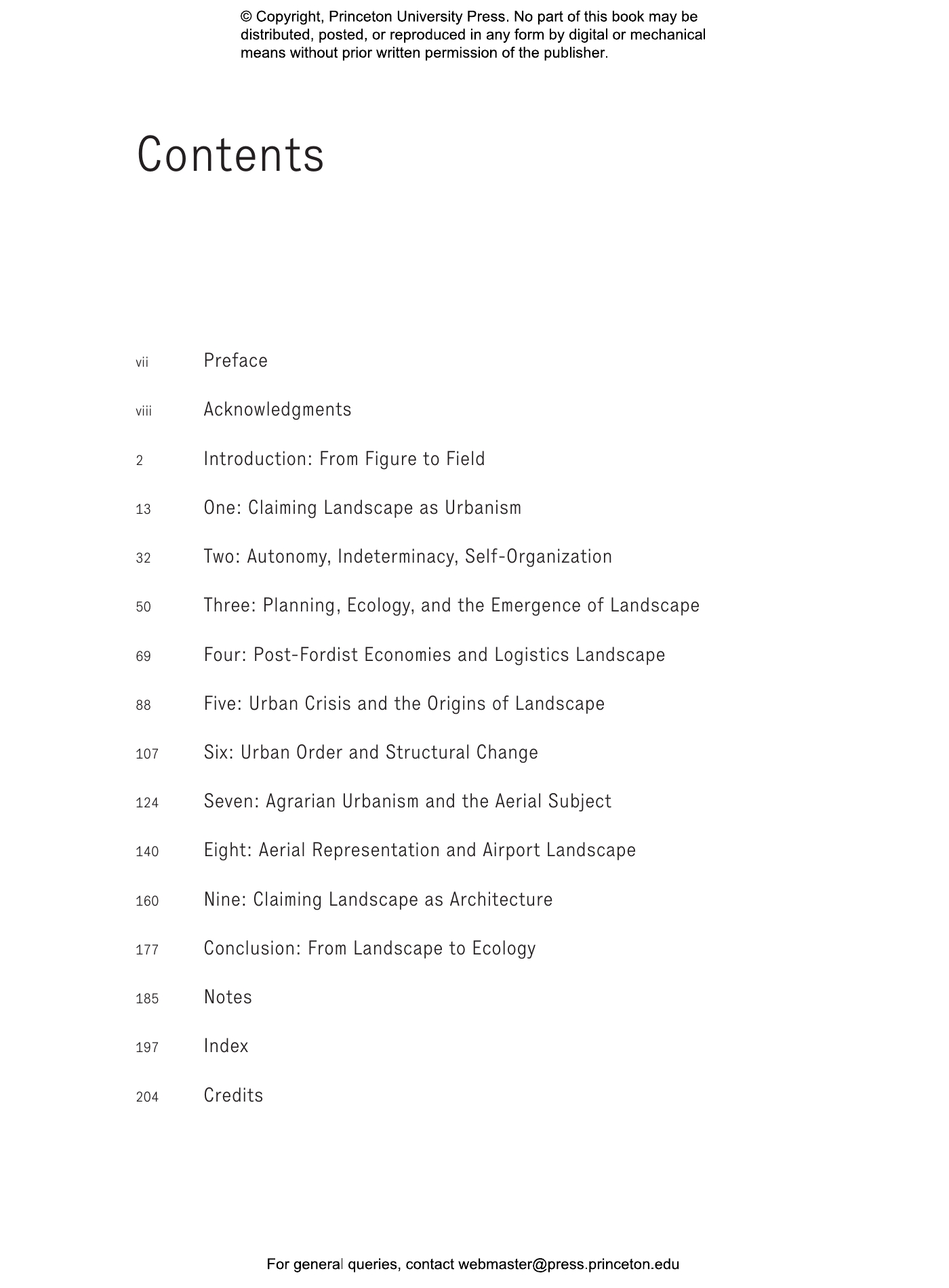 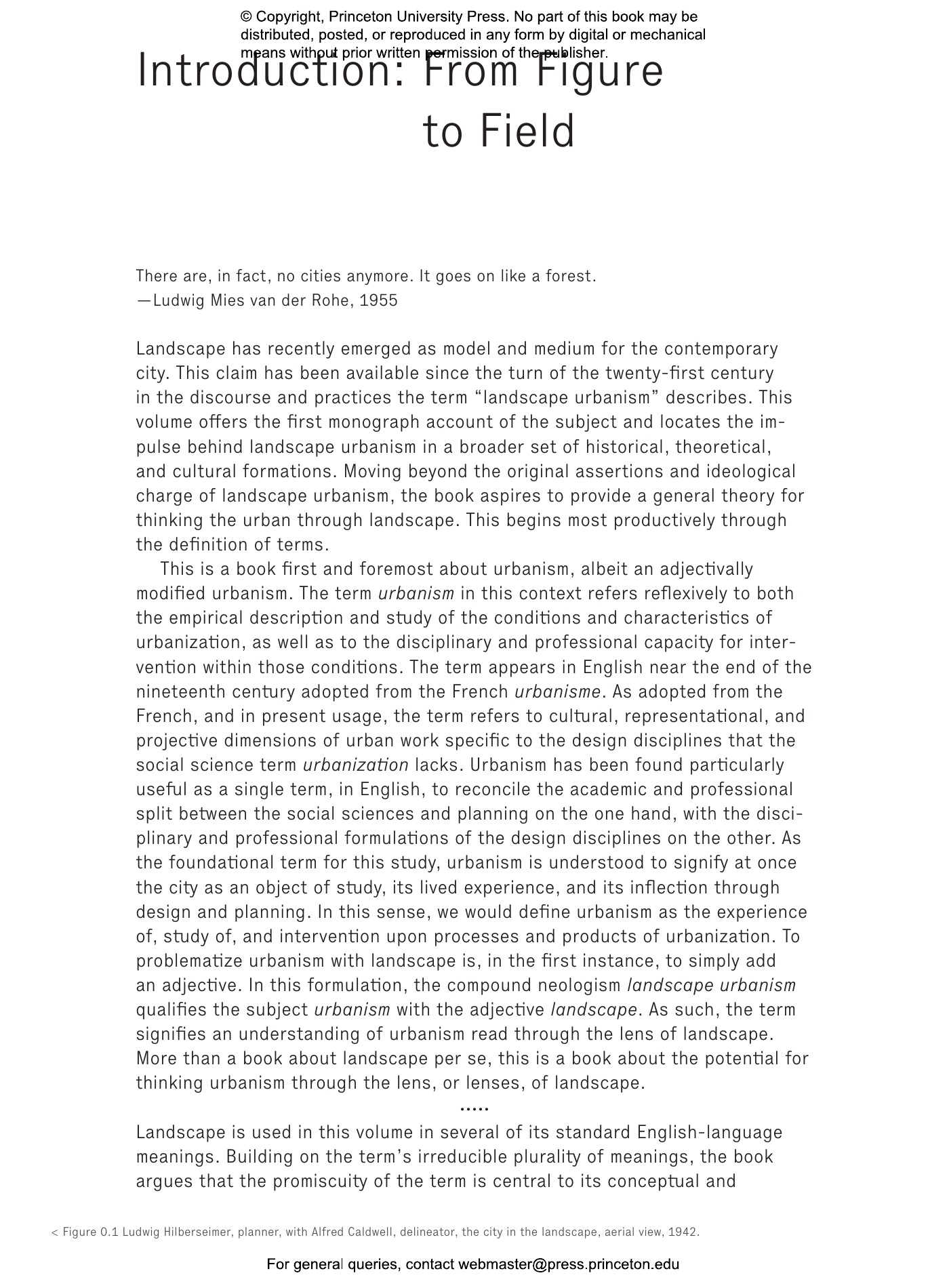 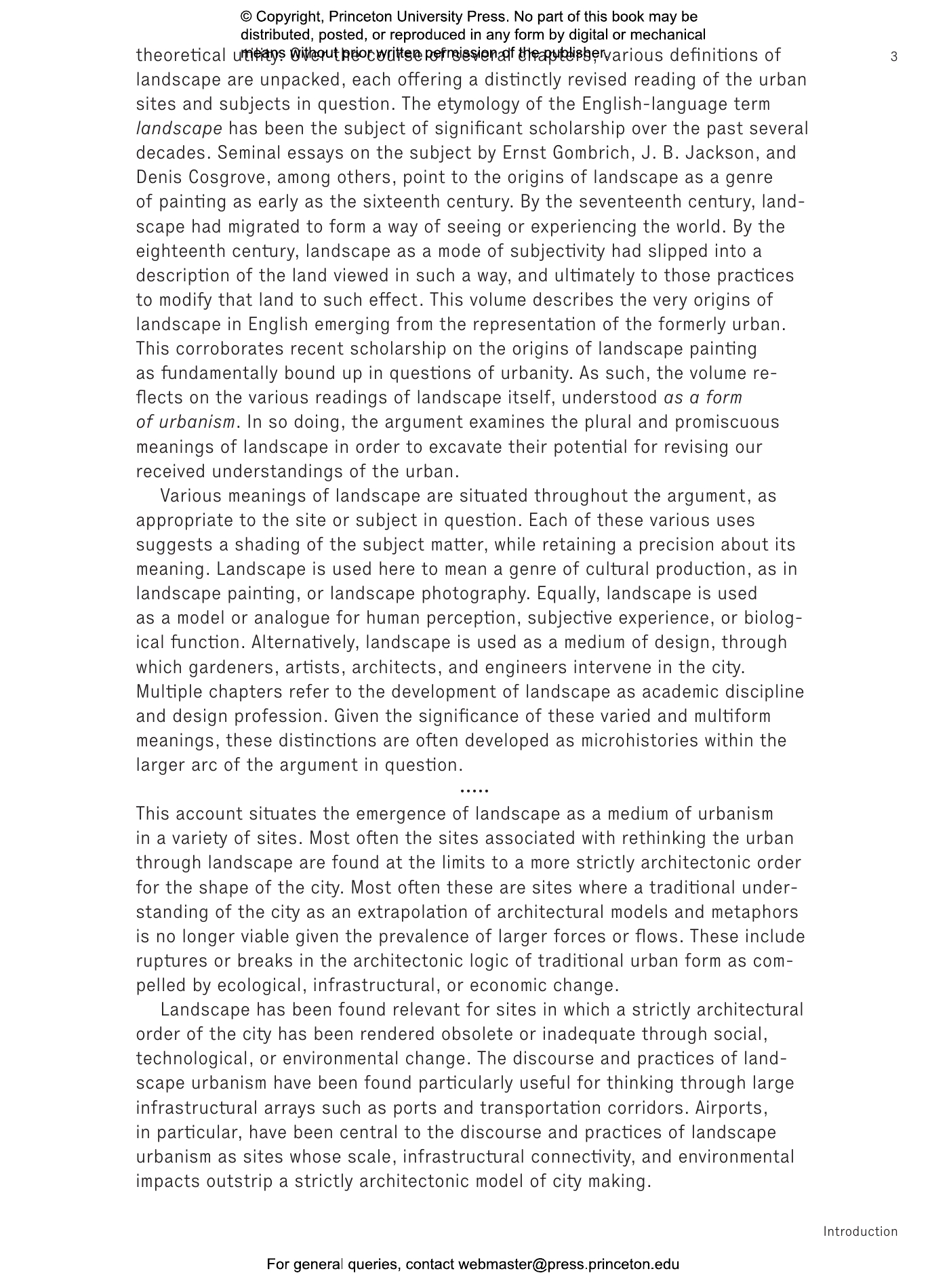 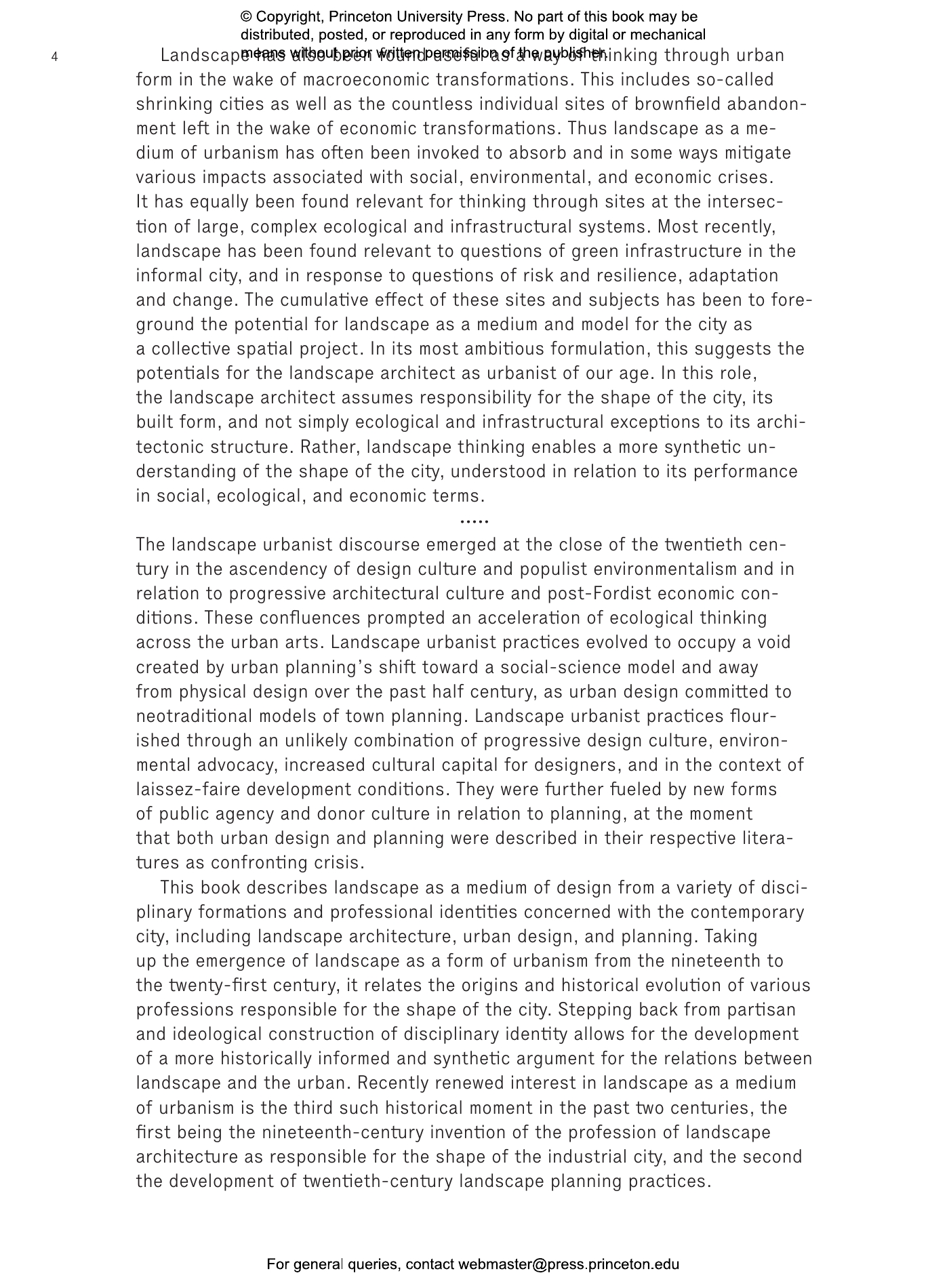 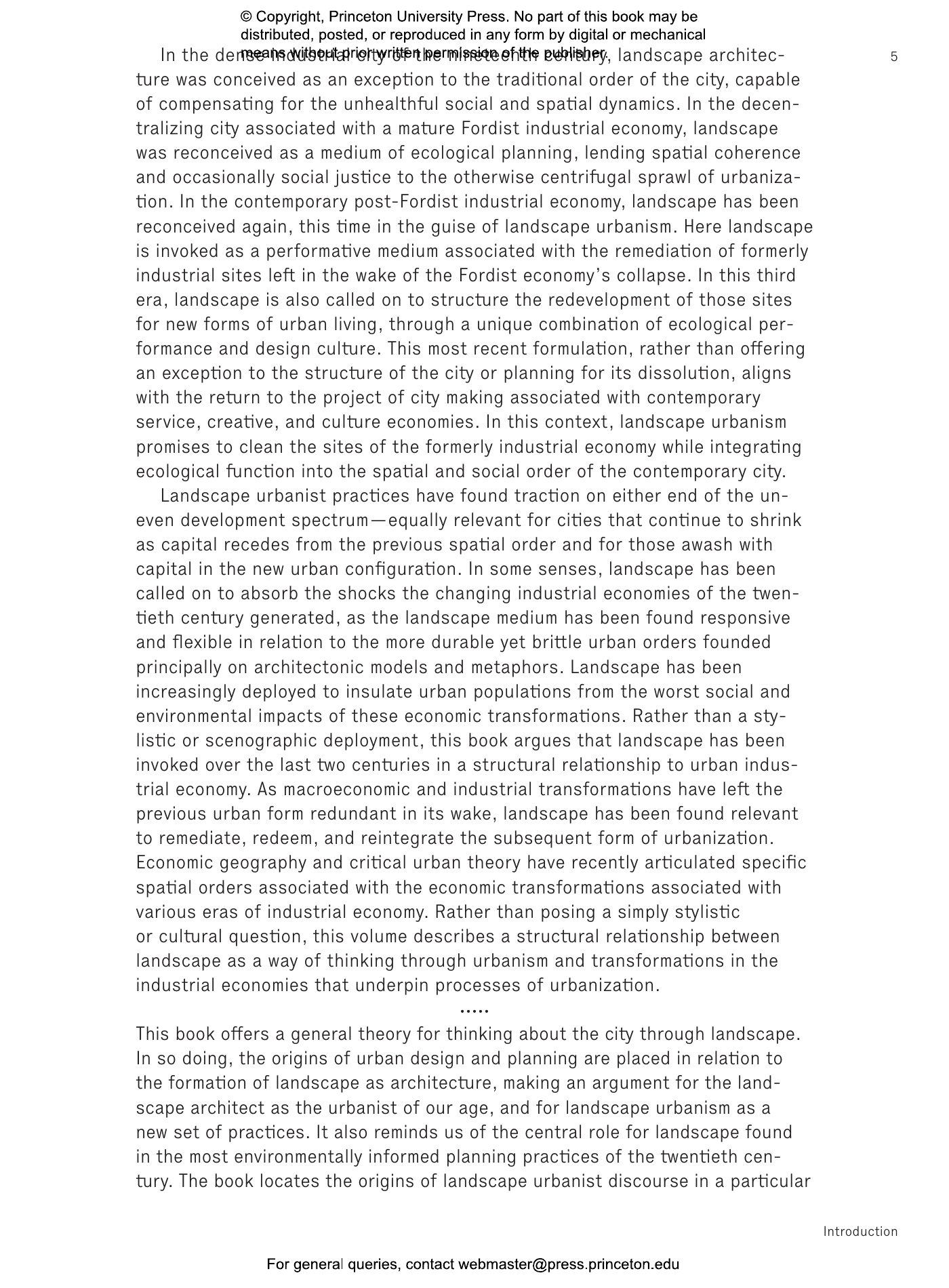 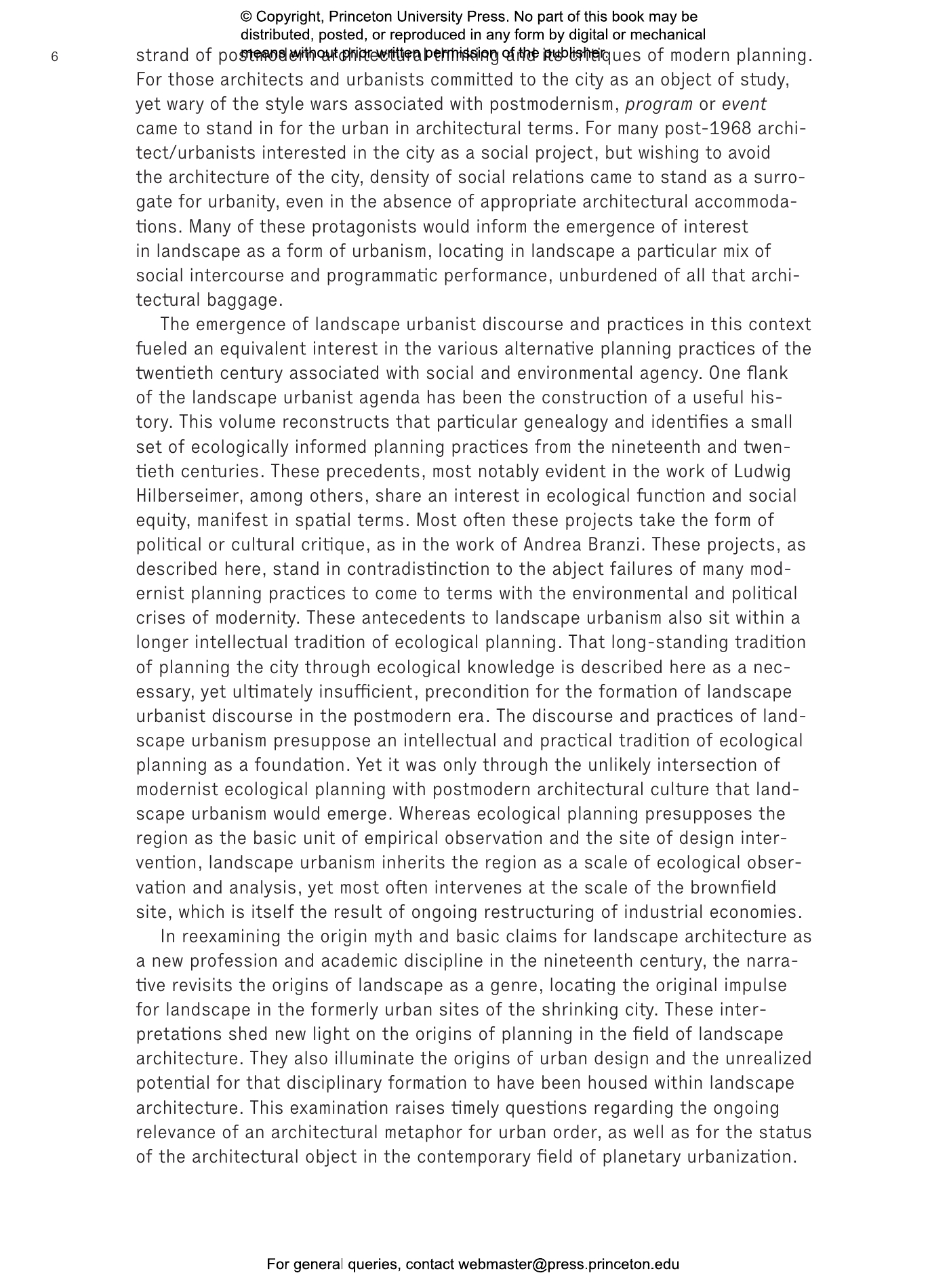 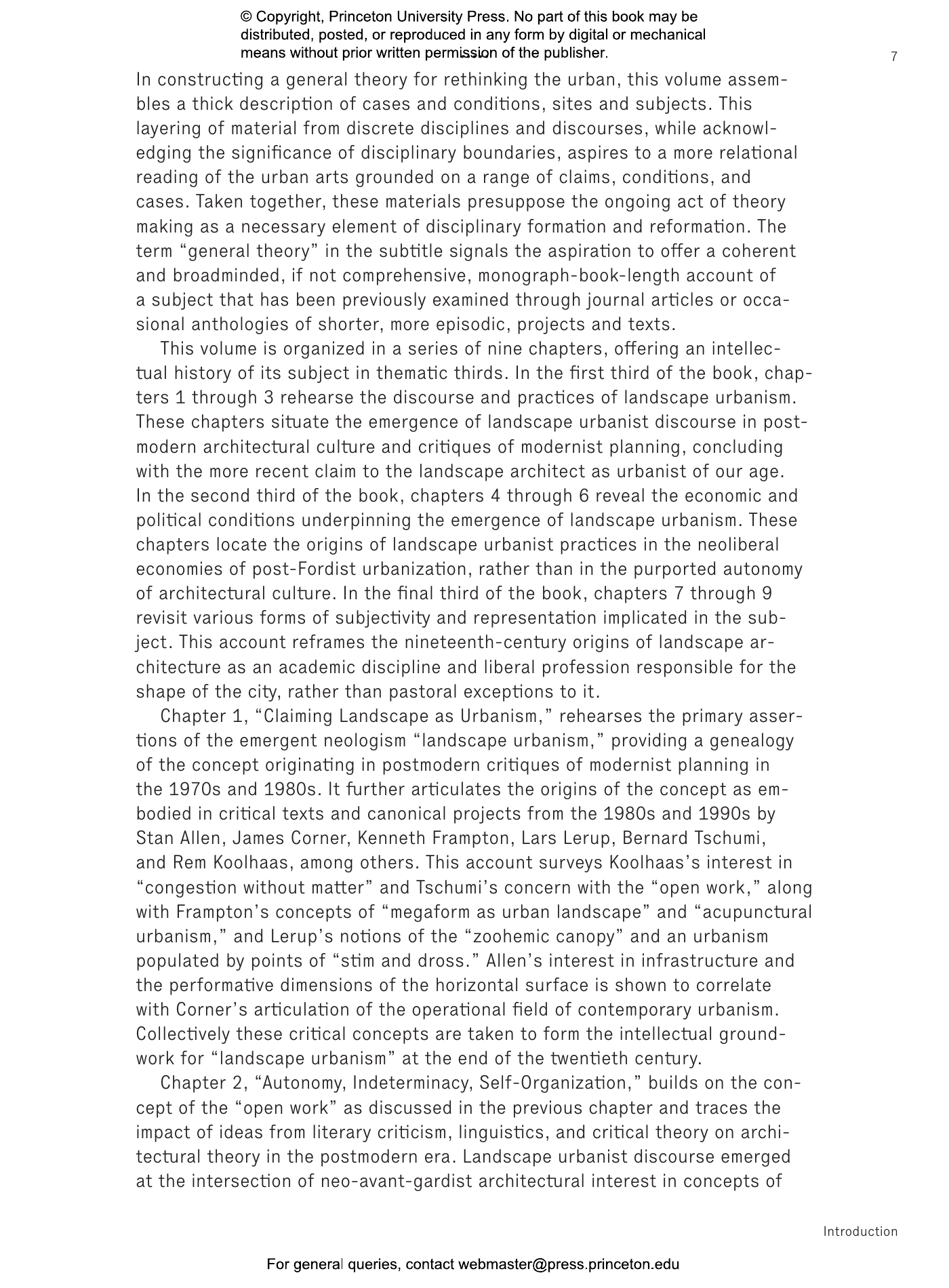 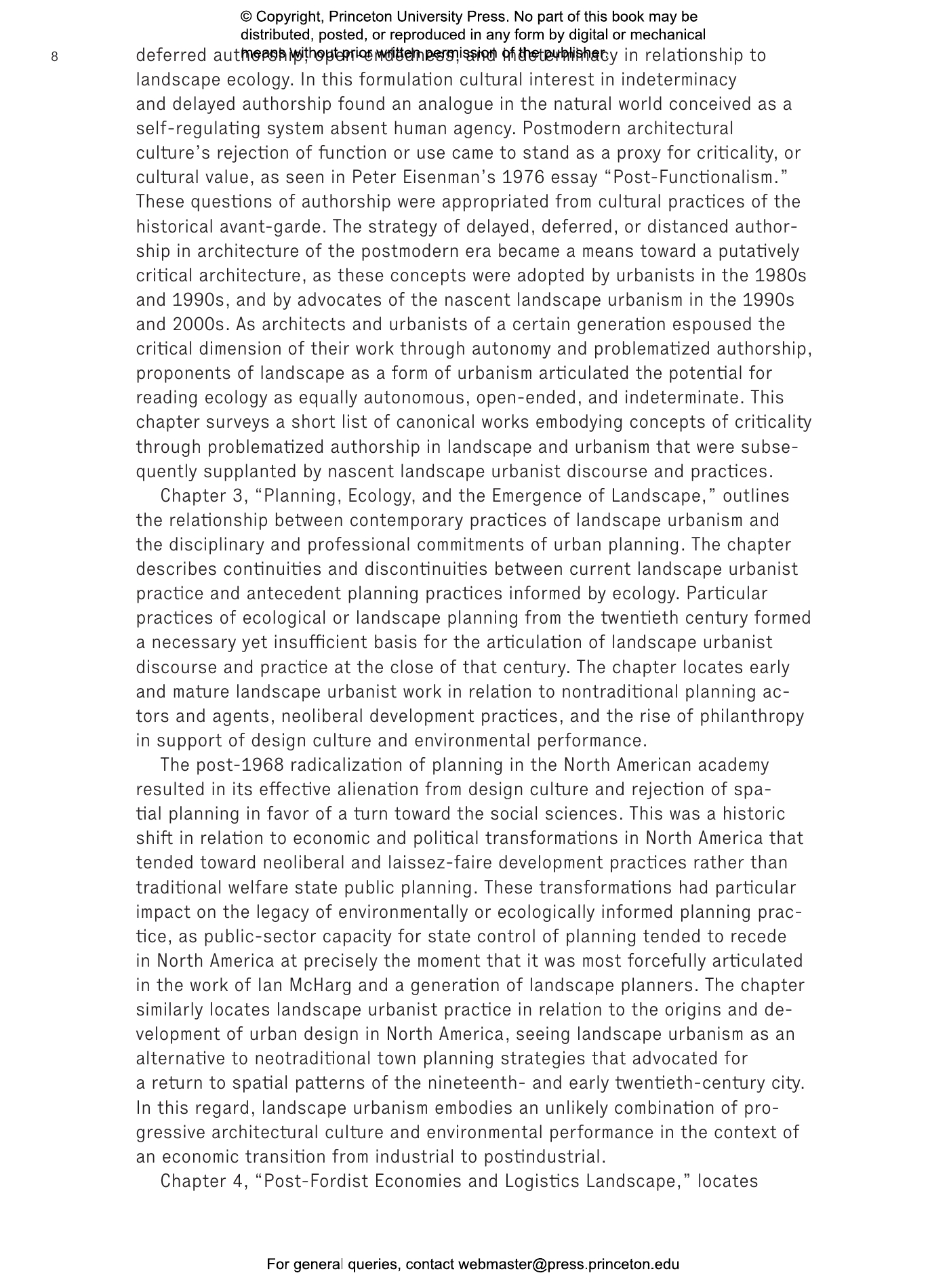 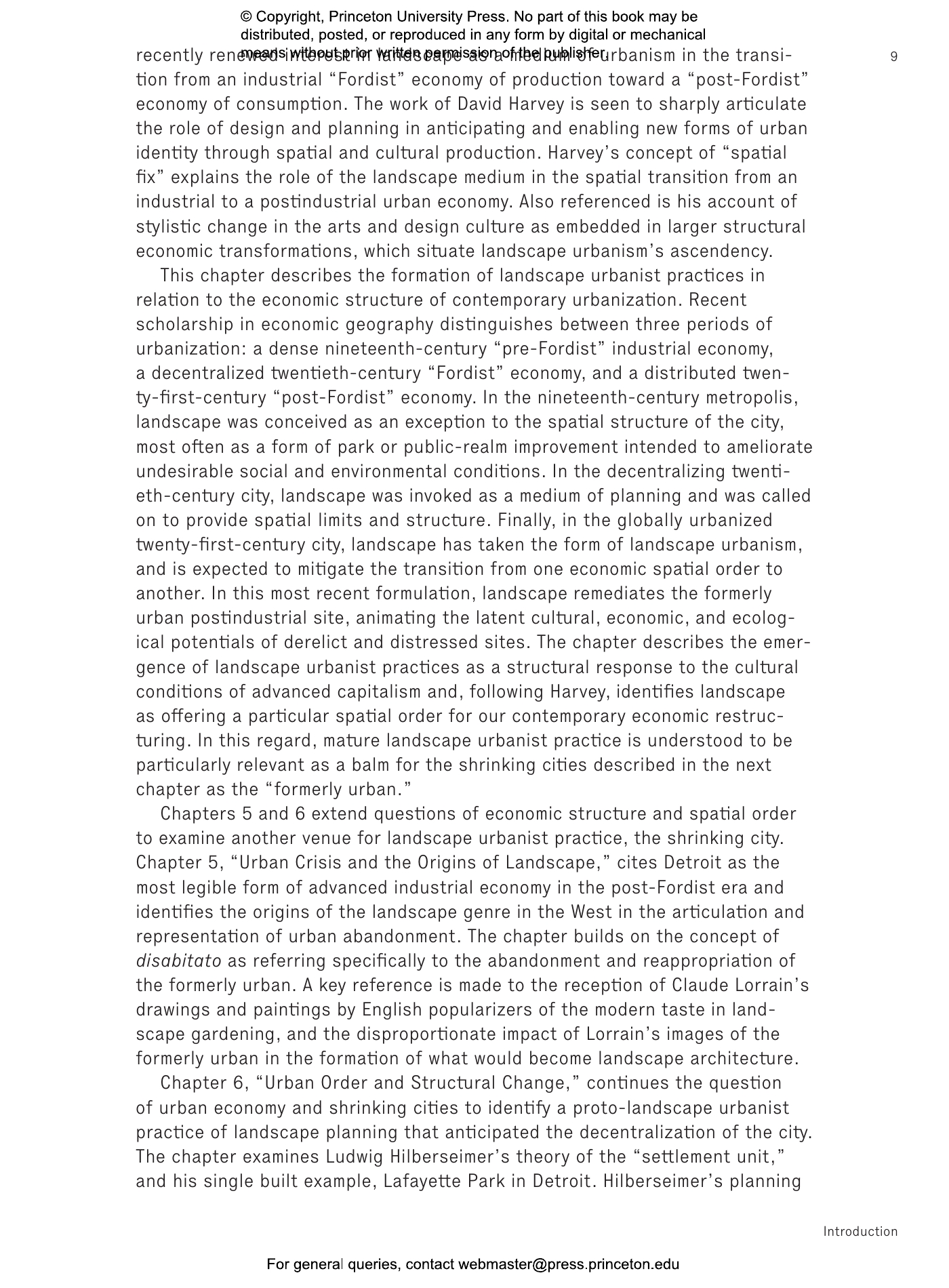 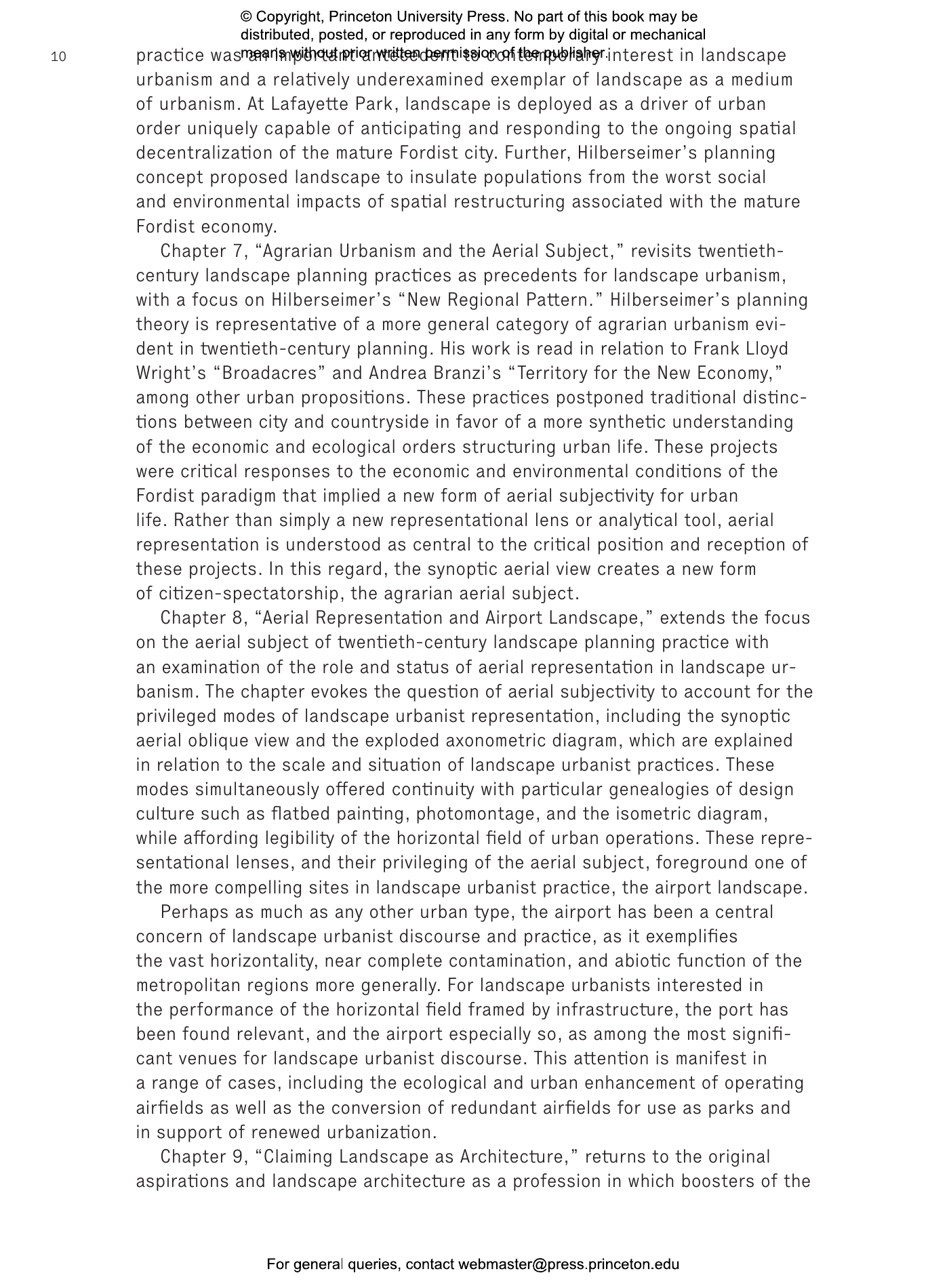 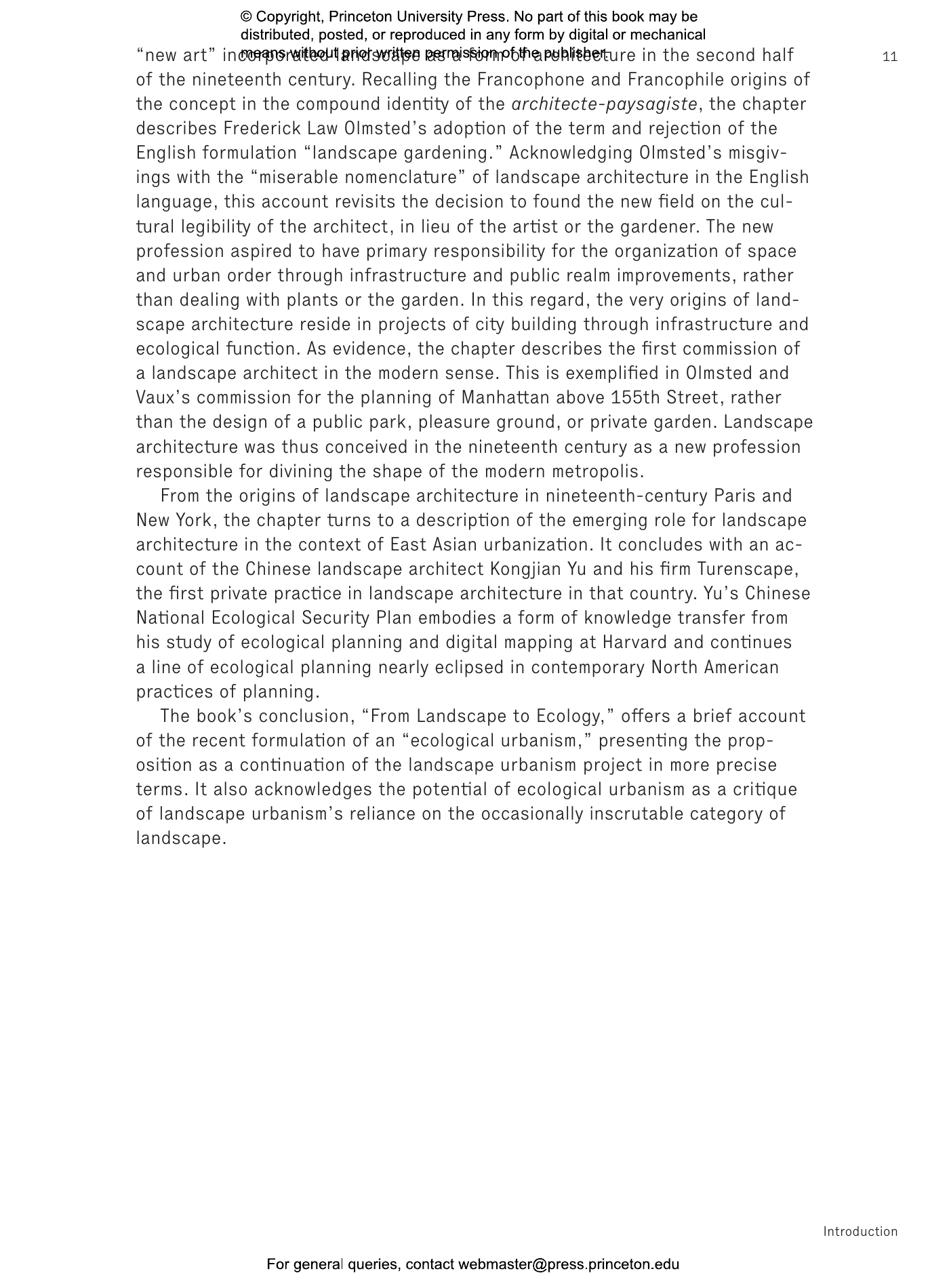 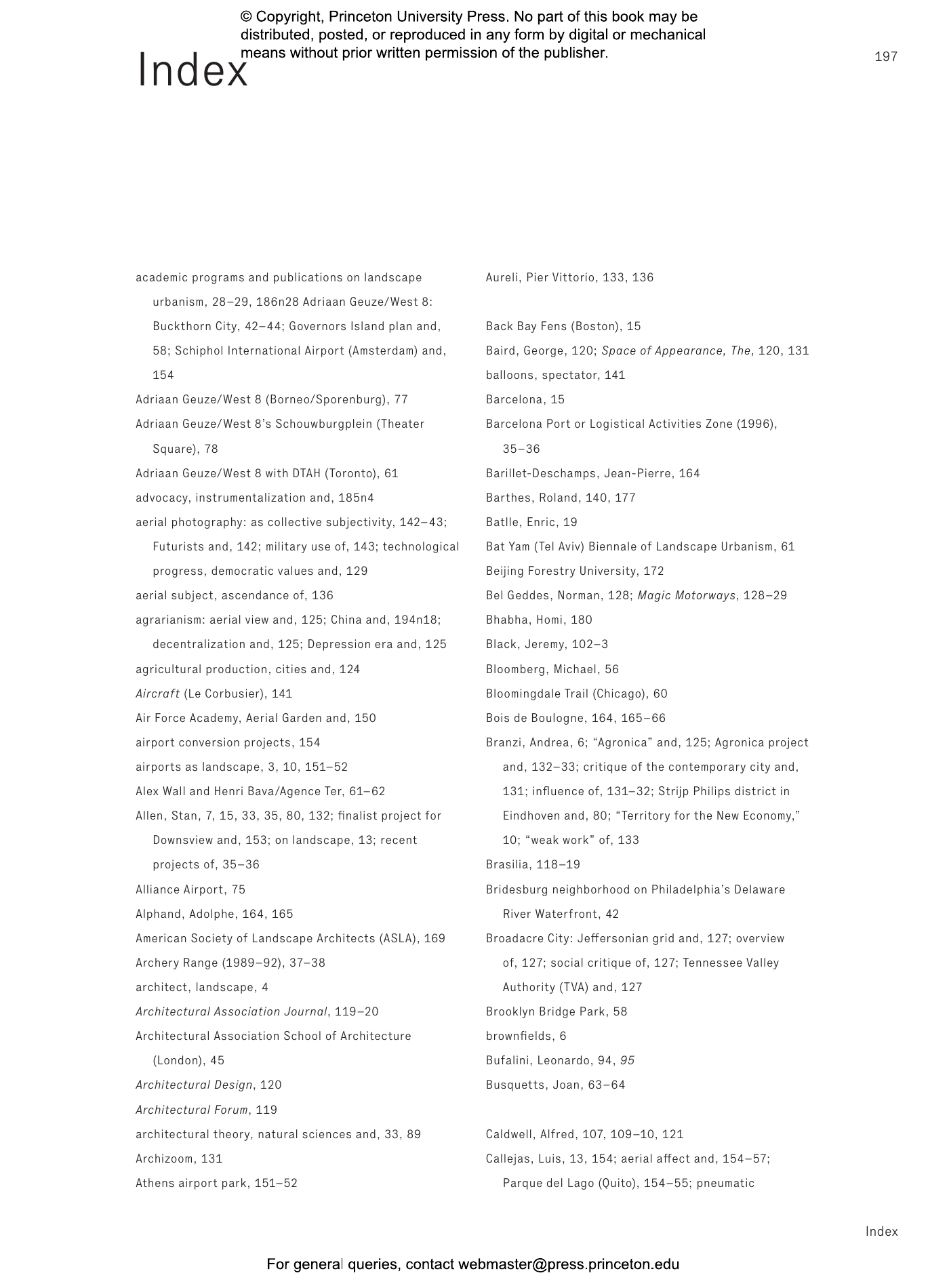 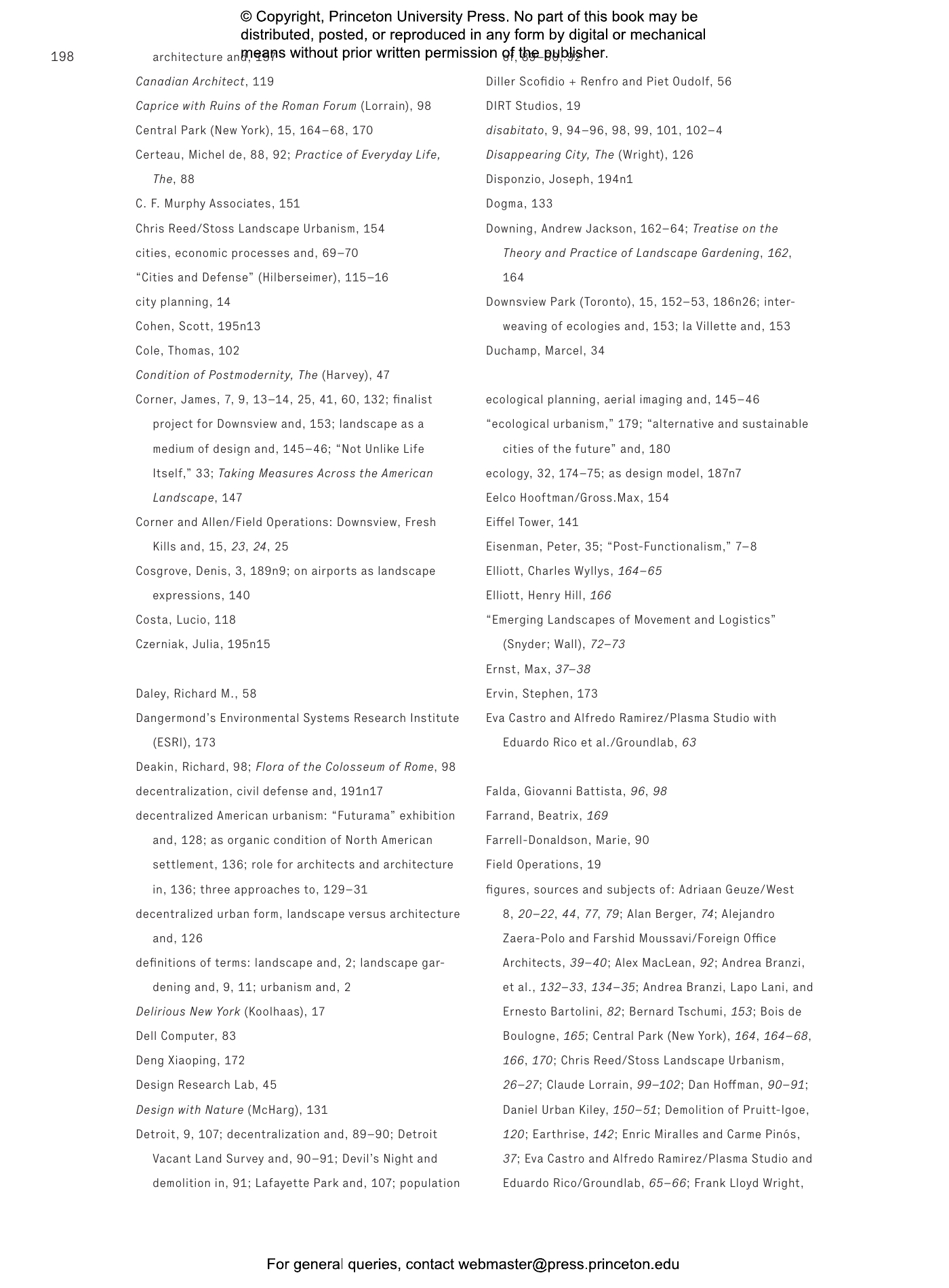 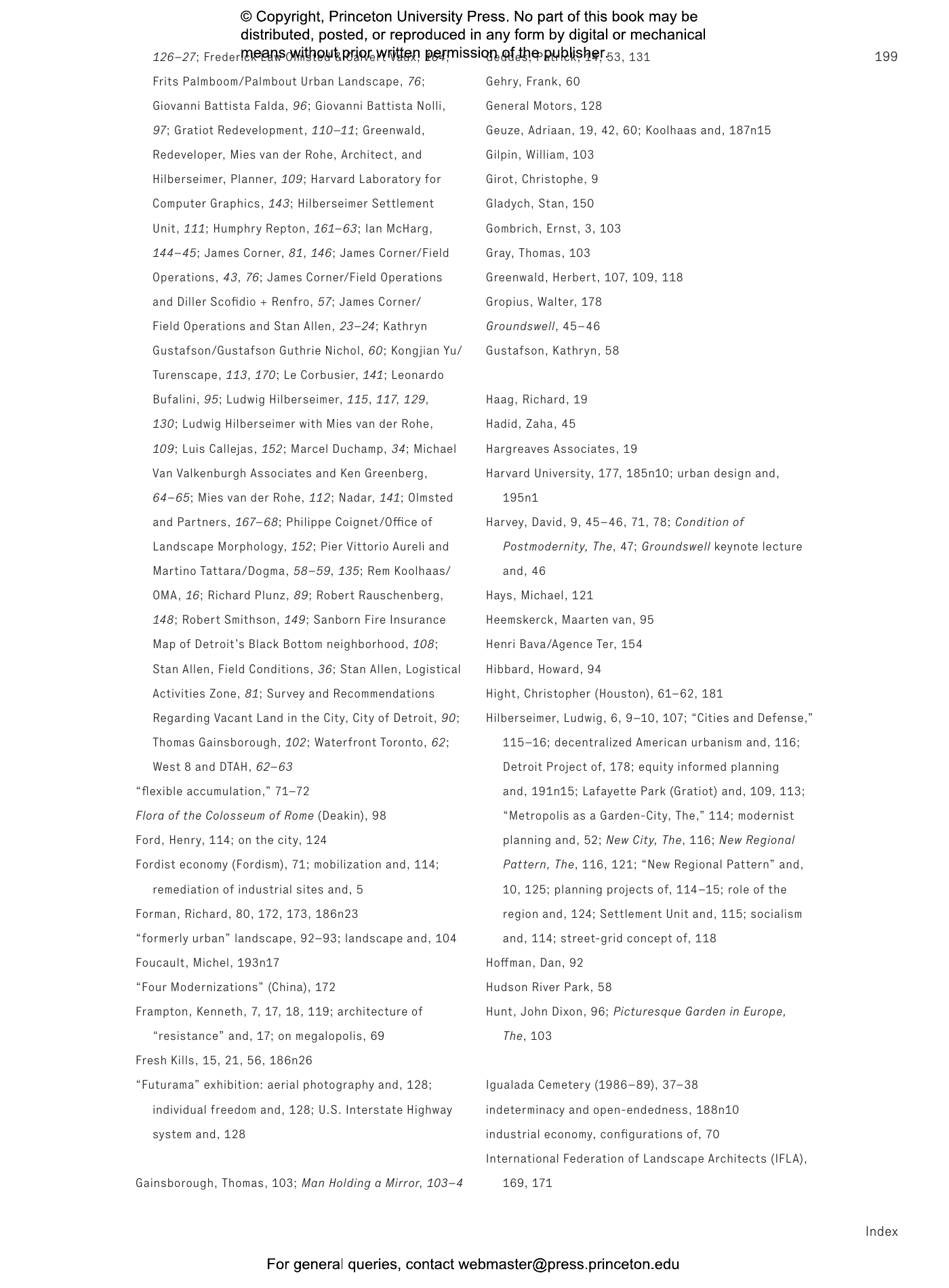 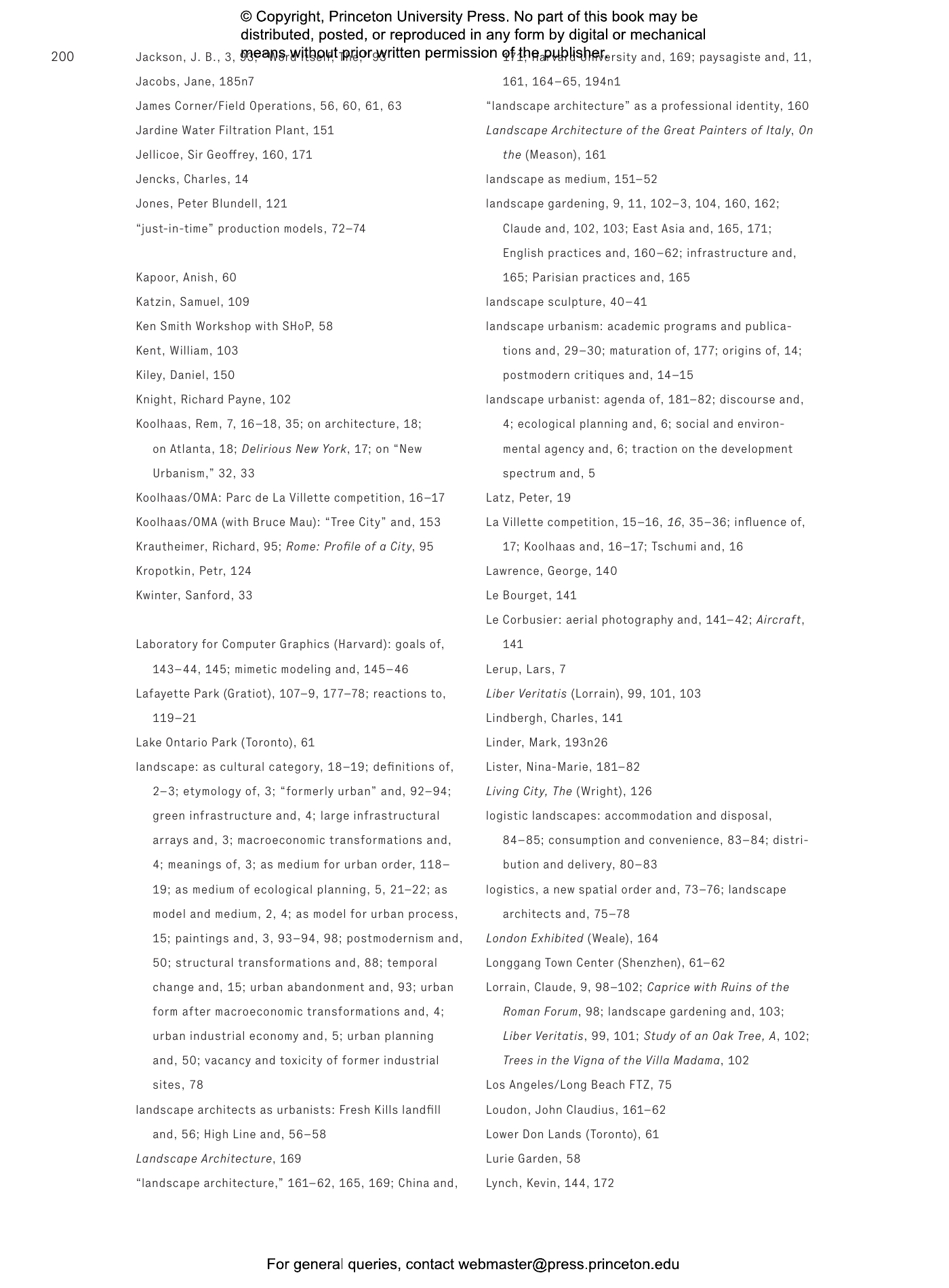 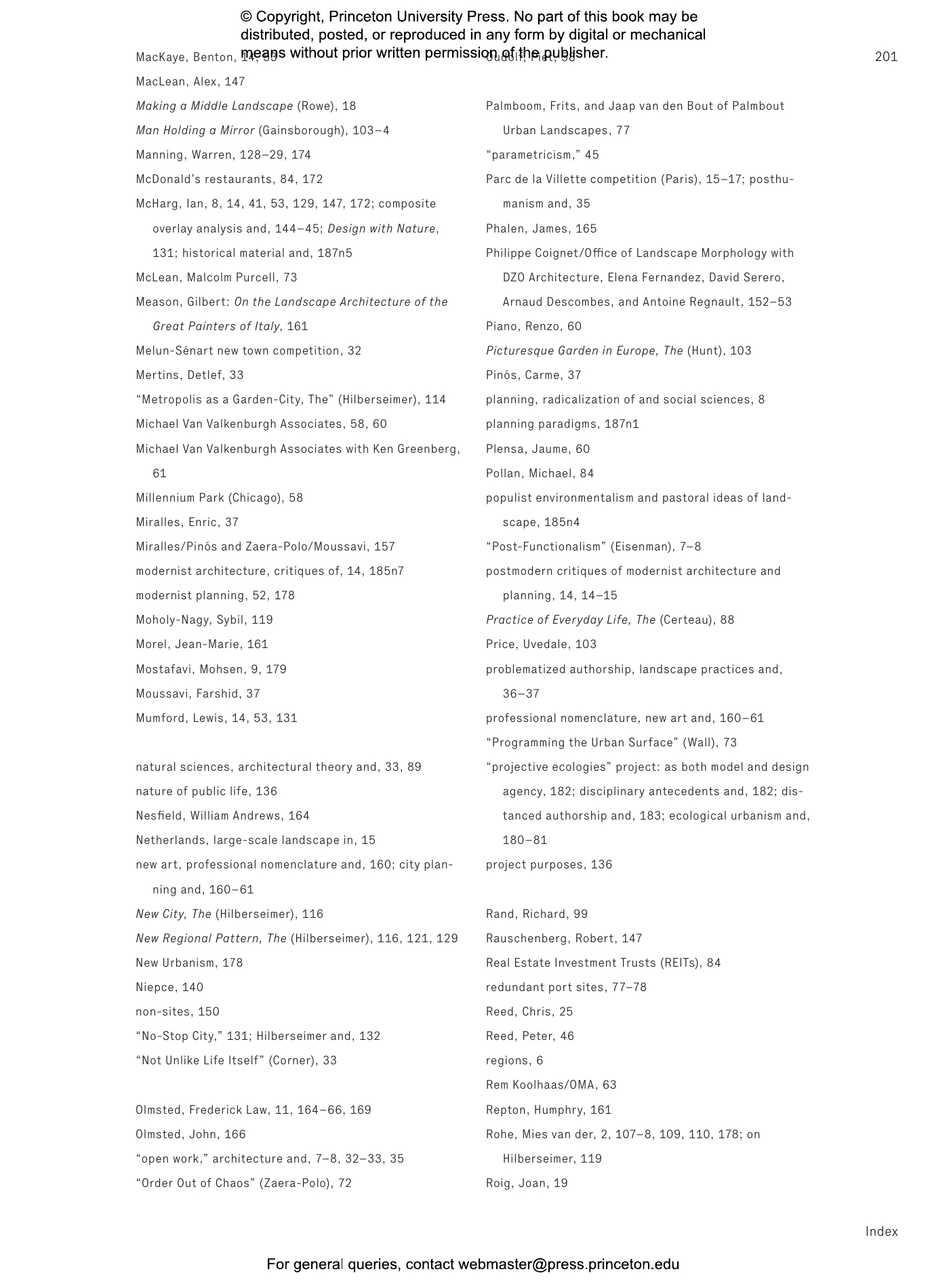 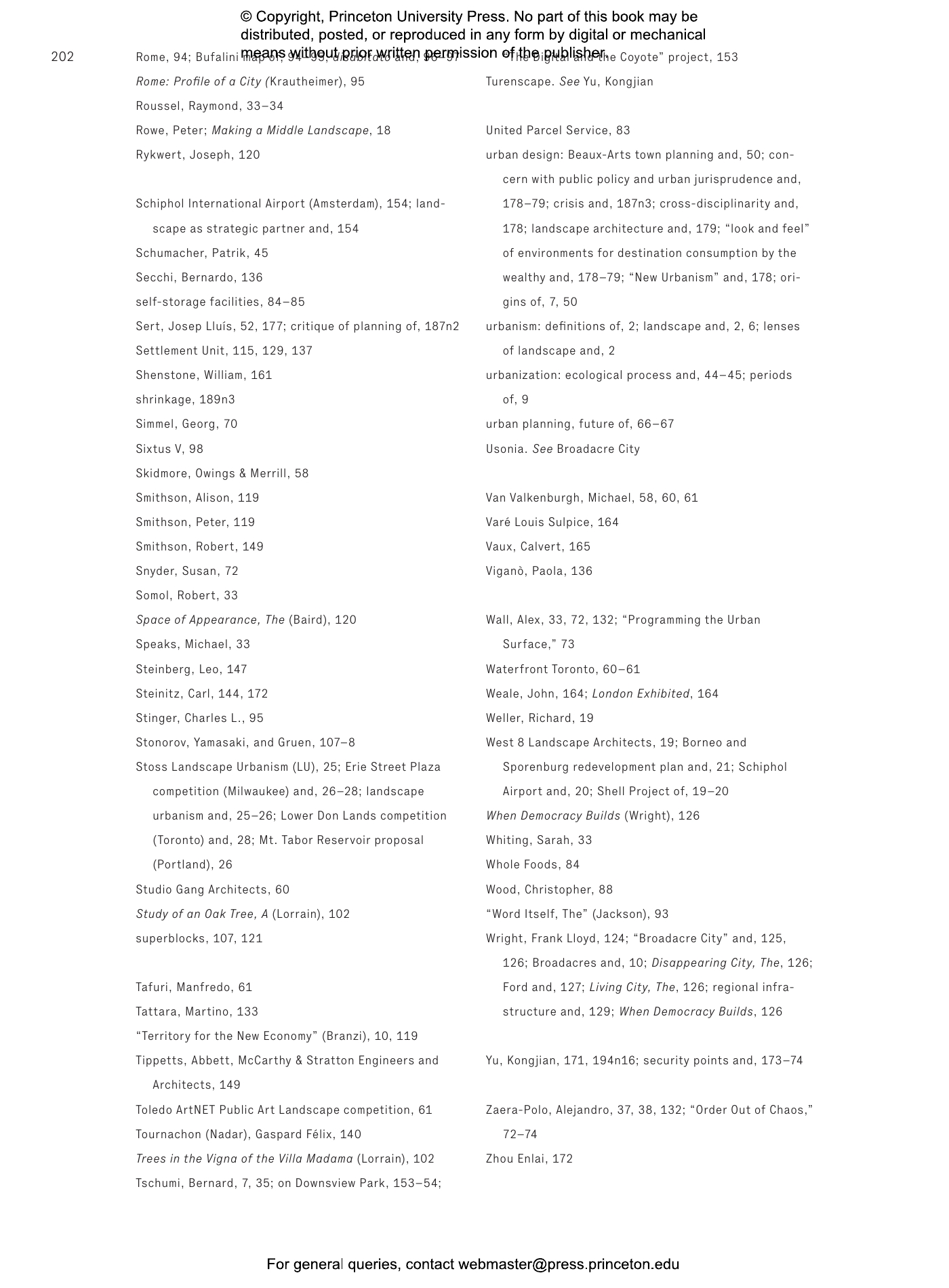 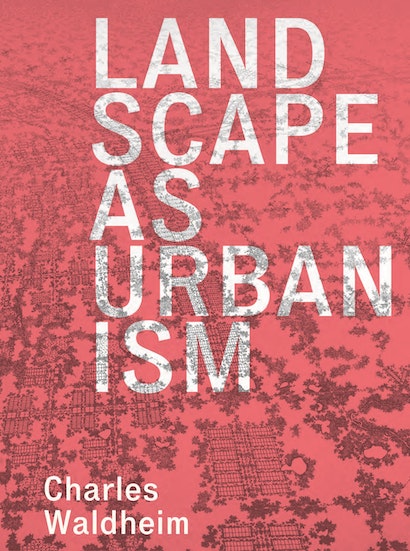 It has become conventional to think of urbanism and landscape as opposing one another—or to think of landscape as merely providing temporary relief from urban life as shaped by buildings and infrastructure. But, driven in part by environmental concerns, landscape has recently emerged as a model and medium for the city, with some theorists arguing that landscape architects are the urbanists of our age. In Landscape as Urbanism, one of the field’s pioneers presents a powerful case for rethinking the city through landscape.

Charles Waldheim traces the roots of landscape as a form of urbanism from its origins in the Renaissance through the twentieth century. Growing out of progressive architectural culture and populist environmentalism, the concept was further informed by the nineteenth-century invention of landscape architecture as a “new art” charged with reconciling the design of the industrial city with its ecological and social conditions. In the late twentieth and early twenty-first centuries, as urban planning shifted from design to social science, and as urban design committed to neotraditional models of town planning, landscape urbanism emerged to fill a void at the heart of the contemporary urban project.

Generously illustrated, Landscape as Urbanism examines works from around the world by designers ranging from Ludwig Hilberseimer, Andrea Branzi, and Frank Lloyd Wright to James Corner, Adriaan Geuze, and Michael Van Valkenburgh. The result is the definitive account of an emerging field that is likely to influence the design of cities for decades to come.

Charles Waldheim is the John E. Irving Professor of Landscape Architecture and director of the Office for Urbanization at Harvard University’s Graduate School of Design. He is the author of Constructed Ground, the editor of The Landscape Urbanism Reader and Case: Lafayette Park Detroit, and the coeditor of Stalking Detroit and Composite Landscapes, among other books.

"Before our cities were grids of asphalt, brick, and steel, they were islands, wetlands, and deserts. For centuries, urbanism relied on the engineer to reconstruct the natural environment around the built environment. But in our era of populist environmentalism, urbanism looks more than ever to the landscape architect. This book reflects on the transformation in which the landscape architect, by adapting human infrastructure to nature, is really the ultimate urbanist."—Metropolis

"In Landscape as Urbanism, one of the field's pioneers presents a powerful case for rethinking the city through landscape. Generously illustrated, [the book] examines works from around the world by designers ranging from Ludwig Hilberseimer, Andrea Branzi, and Frank Lloyd Wright to James Corner, Adriaan Geuze, and Michael Van Valkenburgh."—ArcSpace

"For decades, New Urbanism was the only acceptable form of urban planning in the United States. In the past 15 years, however, several challengers have appeared on the scene, none bolder than the landscape urbanism movement. Spearheaded by Charles Waldheim, who chaired the Department of Landscape Architecture at Harvard's Graduate School of Design (GSD) from 2009 to 2015, the movement and its protagonists argue that landscape, more than buildings, has fundamentally changed the way cities urbanize in the 21st century. Waldheim's new book, Landscape as Urbanism . . . reflects on the origins of landscape urbanism and theorizes about its continued cultural relevance."—Samuel Medina, Metropolis

"Talking about landscape urbanism is more like telling a story than theorizing a practice, and Waldheim tells this story well, with an authority arising from his key role in developing landscape urbanism. . . . As a history teacher faced with endless questions from students who love the idea of it but can't really work out what it is, I am grateful to Waldheim for his new book: Now I can give some readings that have some clarity, accompanied by great writing."—Julian Raxworthy, Landscape Architecture Magazine

"Charles Waldheim, Irving professor of landscape architecture, advances a theoretical underpinning for breaching the barriers that have separated urbanism and landscape; the aim is a more coherent view of what cities can be."—Harvard Magazine

"Suffice to say, as one of the leading voices and purveyors of landscape urbanism, there is no better guide to the subject than Charles Waldheim. As such, Landscape as Urbanism: A General Theory stands in a league of its own, not only as a summary of Waldheim's work on the subject to-date, but also as a convincing and powerful argument for the relevance of landscape as a lens through which the contemporary city must be engaged."—Erick Villagomez, Spacing

"Landscape as Urbanism creates a much-needed intellectual infrastructure for the maturing but still-evolving field of landscape urbanism. Comprehensive and excellent, this will be an essential volume for urbanists, architects, landscape architects, and urban designers and planners."—Jane Amidon, Northeastern University School of Architecture