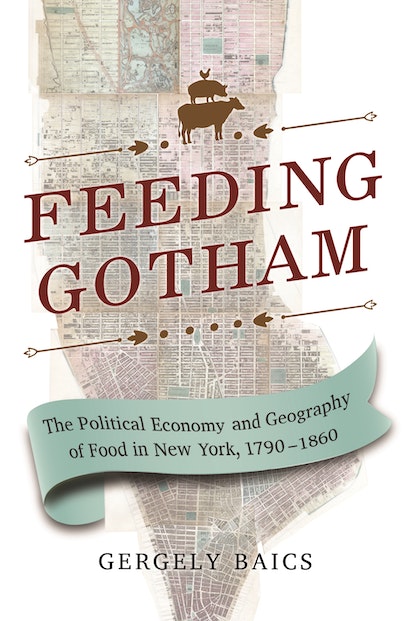 New York City witnessed unparalleled growth in the first half of the nineteenth century, its population rising from thirty thousand people to nearly a million in a matter of decades. Feeding Gotham looks at how America’s first metropolis grappled with the challenge of provisioning its inhabitants. It tells the story of how access to food, once a public good, became a private matter left to free and unregulated markets—and of the profound consequences this had for American living standards and urban development.

Taking readers from the early republic to the Civil War, Gergely Baics explores the changing dynamics of urban governance, market forces, and the built environment that defined New Yorkers’ experiences of supplying their households. He paints a vibrant portrait of the public debates that propelled New York from a tightly regulated public market to a free-market system of provisioning, and shows how deregulation had its social costs and benefits. Baics uses cutting-edge GIS mapping techniques to reconstruct New York’s changing food landscapes over half a century, following residents into neighborhood public markets, meat shops, and groceries across the city’s expanding territory. He lays bare how unequal access to adequate and healthy food supplies led to an increasingly differentiated urban environment.

A masterful blend of economic, social, and geographic history, Feeding Gotham traces how this highly fragmented geography of food access became a defining and enduring feature of the American city.

"Baics has produced one of the year's most original books with this analysis of food markets in New York City in the decades up to the civil war. His account of how New York moved from tight regulation to free-market provisioning is well-organised and full of insights."—Tony Barber, Financial Times Best Books of 2016: History

"Baics carefully and methodically examines the causes and effects of economic and political forces that have changed the access of food distributions in New York City. . . . This valuable book provides the necessary background to better understand current circumstances."—Choice

"Feeding Gotham is an important study; it brings an impressive quantity of data to bear on a subject customarily argued qualitatively. It is a testimony to Baics' ingenuity that his work generates additional questions."—Louis Cain, EH.Net

"Feeding Gotham is not only an extremely well written, stimulating, and scholarly account that defines and fills a gap in the story of New York's food system, but also offers intriguing insights into broader themes in the political economy of place that are of exceptional interest today."—Susan Parham, Economic History Review

"With meticulous care and an impressive methodology, Gergely Baics argues that food access was central to the political economy and urban development of the nation's first metropolis. . . . His methodology is thoroughly documented in the appendices and is a model for future research on the impact of public policy on food access in the American city."—Helen Tangires, Journal of American History

"A fascinating tale. . . . The book will interest food historians, scholars of urban history, and those who study daily life in nineteenth-century America. But it also reveals an unexpected story about what may have been America's first great adventure in deregulation. . . . An important and insightful book."—Marc Levinson, Business History Review

"Baics's analysis enables an important conclusion. . . . The author’s meticulous research has convinced the reader of the virtue, if not the need, of public regulation over food supply to ensure an equitable experience for all consumers."—Theresa McCulla, Journal of Social History

"The great gift of Feeding Gotham is its methodological innovation and its painstaking tabulation and analysis of data. . . . This creative use of quantitative analysis is a model for how historical geography can provide new insights into economic development and urban history, as well as the opportunities provided by the large-scale digitization of archival records. . . . Throughout the book, Baics grounds his analysis in a careful reading of the lived experience of New Yorkers of all walks of life in pursuit of their daily bread or meat. The result is a careful attempt to understand how one major city managing massive demographic growth reconfigured access to food."—Courtney Fullilove, Common-Place

"Public health officials can no longer ignore the importance of food, and this timely book provides valuable historical insights for those seeking to ensure that underprivileged communities have access to fresh and healthy foods."—Jeffrey M. Pilcher, American Historical Review

"Feeding Gotham is an admirably researched and important reference for historians interested in questions of urban development and economic inequality in the growing metropolis."—Cindy R. Lobel, Reviews in American History

"Feeding Gotham documents what happened when New York's public food markets were deliberately deregulated in 1843. As Baics's GIS maps clearly show, social inequality in food consumption, food access, and food safety took off in this crowded city of immigrants. While the landlord class profited and their cuisine diversified, the poor suffered insanitary tenements and an unhealthy food supply. This is history with distinct contemporary resonance: public-policy choices around the food industry profoundly matter."—Simon Szreter, University of Cambridge

"This fascinating book presents a rich analysis of the economic geography of nineteenth-century New York City, with an emphasis on wholesale and retail food distribution. Baics paints an extraordinarily detailed portrait of the evolution of New York's built environment and the effects this had on living conditions in the city."—Eric Hilt, Wellesley College

"Baics employs very sophisticated techniques of geographical analysis, statistical analysis, and GIS mapping to reconstruct an extraordinary portrait of food markets in New York City prior to the Civil War."—John Lauritz Larson, author of The Market Revolution in America: Liberty, Ambition, and the Eclipse of the Common Good