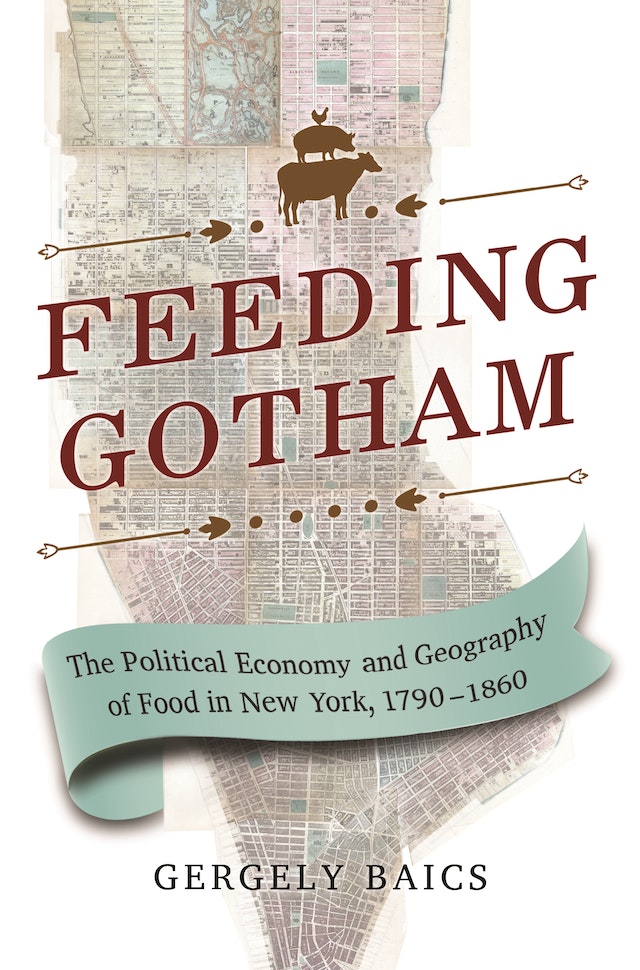 Buy This
New York City witnessed unparalleled growth in the first half of the nineteenth century, its population rising from thirty thousand to nearly a million in a matter of decades. Feeding Gotham looks at how America’s first metropolis grappled with the challenge of provisioning its inhabitants. It tells the story of how access to food, once a public good, became a private matter left to free and unregulated markets—and of the profound consequences this had for American living standards and urban development. Taking readers from the early republic to the Civil War, Gergely Baics explores the changing dynamics of urban government, market forces, and the built environment that defined New Yorkers’ experiences of supplying their households. A masterful blend of economic, social, and geographic history, Feeding Gotham traces how a highly fragmented geography of food access became a defining and enduring feature of the American city.

“Baics has produced one of the year’s most original books…. His account of how New York moved from tight regulation to free-market provisioning is well-organised and full of insights.”—Tony Barber, Financial Times

“With meticulous care and an impressive methodology, Gergely Baics argues that food access was central to the political economy and urban development of the nation’s first metropolis…. His methodology is thoroughly documented in the appendices and is a model for future research on the impact of public policy on food access in the American city.”—Helen Tangires, Journal of American History

“Feeding Gotham is not only an extremely well written, stimulating, and scholarly account that defines and fills a gap in the story of New York's food system, but also offers intriguing insights into broader themes in the political economy of place that are of exceptional interest today.”—Susan Parham, Economic History Review