How American Jesuits helped forge modern Catholicism around the world 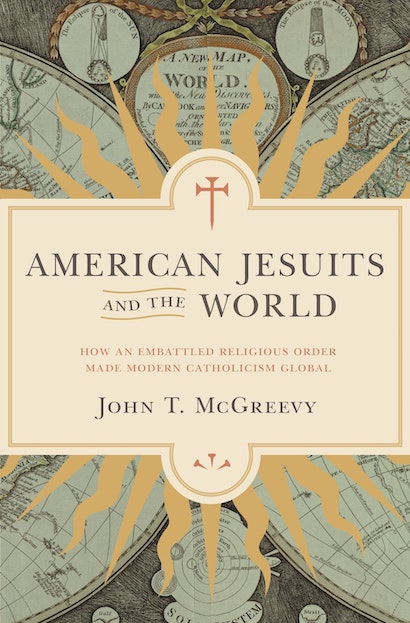 At the start of the nineteenth century, the Jesuits seemed fated for oblivion. Dissolved as a religious order in 1773 by one pope, they were restored in 1814 by another, but with only six hundred aged members. Yet a century later, the Jesuits numbered seventeen thousand men and were at the vanguard of the Catholic Church’s expansion around the world. In the United States especially, foreign-born Jesuits built universities and schools, aided Catholic immigrants, and served as missionaries. This book traces this nineteenth-century resurgence, showing how Jesuits nurtured a Catholic modernity through a disciplined counterculture of parishes, schools, and associations.

Drawing on archival materials from three continents, American Jesuits and the World tracks Jesuits who left Europe for America and Jesuits who left the United States for missionary ventures across the Pacific. Each chapter tells the story of a revealing or controversial event, including the tarring and feathering of an exiled Swiss Jesuit in Maine, the efforts of French Jesuits in Louisiana to obtain Vatican approval of a miraculous healing, and the educational efforts of American Jesuits in Manila. These stories place the Jesuits at the center of the worldwide clash between Catholics and liberal nationalists, and reveal how the Jesuits not only revived their own order but made modern Catholicism more global.

The result is a major contribution to modern global history and an invaluable examination of the meaning of religious liberty in a pluralistic age.

John T. McGreevy is dean of the College of Arts and Letters and professor of history at the University of Notre Dame. His books include Catholicism and American Freedom: A History. He lives in South Bend, Indiana.

"This book is a sensational eye-opener, even for me, a Jesuit for the past forty-six years. While I knew the oft-quoted rough denunciations of the Jesuits by John Adams and Thomas Jefferson, I had no idea of how deep and pervasive American anti-Jesuit sentiments were—nor why they were so extreme, nor how they were overcome—until I read McGreevy's splendid work. . . . Groundbreaking. . . . [An] extraordinarily rewarding work."—James F. Keenan, Commonweal

"In a study stunning in the breadth and depth of its international contextualization, John T. McGreevy, through a focus on five emblematic developments in the late 19th century, has deftly captured this remarkable growth of the Jesuit institutional presence in the United States and its intellectual evolution from a countercultural body under siege to one ‘at home' with American culture and institutions, while recapturing the global vision of its 19th-century founders."—Robert Emmett Curran, America

"There really ought to be better books about the American Jesuit experience, especially ones that move beyond educational case studies or the predictable crowd of well-travelled missionaries. In this panoramic and limpidly written study McGreevy sets a fine example."—Jonathan Wright, Catholic Herald

"In six engaging chapters, Catholic historian McGreevy (history, Univ. of Notre Dame; Parish Boundaries) focuses on specific individuals or institutions in various parts of the United States and the Philippines as a way to examine the influence of American Jesuits on the wider world in the 19th and early 20th centuries, and their interaction with American culture, especially church-state relations. . . . This work will draw in anyone interested in American religious history."—Library Journal

"[A] fascinating new book. . . . Readers of American Jesuits and the World will meet a remarkably captivating cast of characters who, despite their obscurity today, enjoyed wide spheres of influence and forged a shared legacy with powerful contemporary resonance. They will also get a taste for why the Jesuits are so intriguing and why they will continue to be so important for the life of the church in the 21st century."—James P. McCartin, Catholic New World

"This is an elegantly written and narrated study of an aspect of Jesuit history that scholars of American religion, of the North American foreign mission enterprise, and of Catholic institutional and social history will need to read."—Mark S. Massa, Reading Religion

"McGreevy explores the global revival of the Jesuit order following its restoration in 1814. Portraying the Jesuits as a highly organized global missional organization, the author examines the unprecedented growth of the order after its restoration and describes how the Jesuits became a global force for modern Catholicism. . . . Based on an impressive array of archival research, this book provides a glimpse into the personal struggles Jesuits faced in the US. McGreevy delves deep into the unique individual stories that comprise the Jesuit global experience, making this well-researched book a surprisingly personal narrative."—Choice

"John McGreevy has joined the global history parade with a book on a topic that is long overdue: American Jesuits and the World: How an Embattled Religious Order Made Modern Catholicism Global. This is a very enjoyable book to read as McGreevy paints five historical sketches of nineteenth century Jesuits, about whom too little is known and whose lives were fascinating, conflicted and important."—Michael Sean Winters, National Catholic Reporter

"Written in an engaging style, McGreevy's book is the product of meticulous scholarship (sixty-six pages of endnotes), and includes helpful illustrations and maps indicating the migration of Jesuits to and from the United States."—Anthony Kuzniewski, Catholic Historical Review

"Professor McGreevy has not so much written about American Jesuits venturing out from their continent, but rather produced a series of quite fascinating vignettes of nineteenth-century European Jesuits. . . . Readers . . . will discover much about what it was like to be a nineteenth-century American Catholic parishioner, about religious prejudice in the States, and about anti-Jesuit feeling."—Michael Walsh, The Tablet

"An engaging analysis of how the Jesuits revived themselves and established Catholicism as a global enterprise. . . . McGreevy’s investigation of issues including education, immigration, and nationalism is both important and timely. His book will be of great value to scholars and graduate students interested in the concept of freedom of religion in this era. . . . Overall, this book makes an important contribution to the field and is highly recommended."—Alison C. Fleming, Horizons

"Told through brilliantly rendered portraits, American Jesuits and the World describes how European Jesuits, unmoored by revolution in their home countries, fled to the United States and from their new home contributed to shaping a distinctly Catholic global modernity. This is not solely a book about a religious order, but a new history of American Catholicism. A stunning achievement."—Robert A. Orsi, author of History and Presence

"Global history is all the rage today, yet one of the most global institutions—the Catholic Church—has largely been ignored in this new wave of scholarship. In this timely and brilliantly argued book, McGreevy convincingly shows that in order to understand the modern world—and modern America—we need to come to terms with globe-trotting priests with a global vision. A lively and often surprising account."—Sven Beckert, author of Empire of Cotton: A Global History

"This is a fine book by an accomplished and well-recognized historian of Catholicism in the United States. McGreevy writes in clear and accessible prose, and he fills his narrative with fascinating characters that reveal a great deal about how Catholic immigrants dealt with the nation they adopted as their own."—John W. O'Malley, SJ, author of The Jesuits: A History from Ignatius to the Present

"American Jesuits and the World will rightly be recognized as the history of American Jesuits—deftly conceived, superbly researched, and beautifully written."—Jon Butler, coauthor of Religion in American Life: A Short History