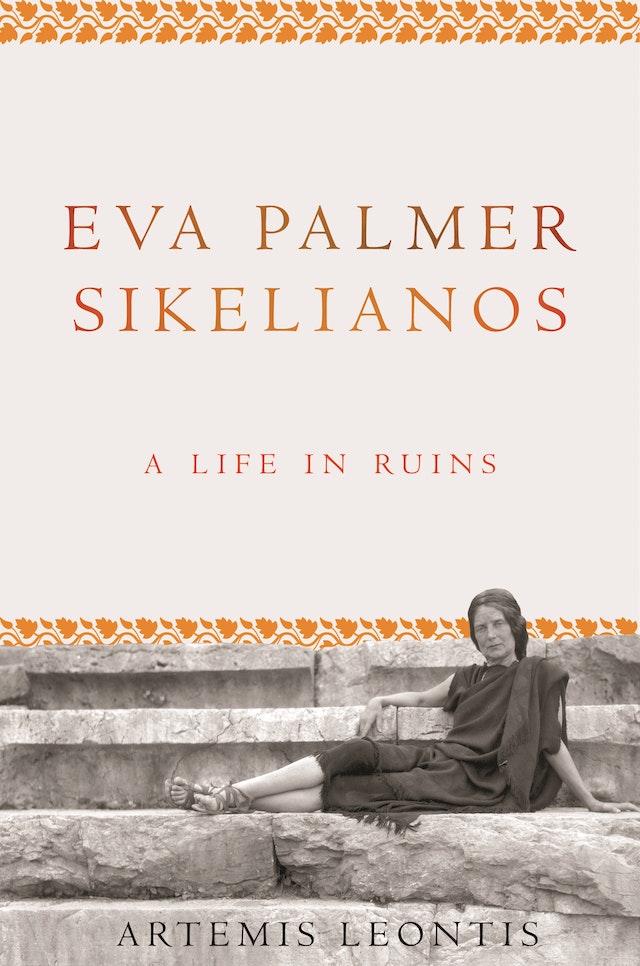 This is the first biography to tell the fascinating story of Eva Palmer Sikelianos (1874–1952), an American actor, director, composer, and weaver best known for reviving the Delphic Festivals. Yet, as Artemis Leontis reveals, Palmer’s most spectacular performance was her daily revival of ancient Greek life. For almost half a century, dressed in handmade Greek tunics and sandals, she sought to make modern life freer and more beautiful through a creative engagement with the ancients. Along the way, she crossed paths with other seminal modern artists such as Natalie Clifford Barney, Renée Vivien, Isadora Duncan, Susan Glaspell, George Cram Cook, Richard Strauss, Dimitri Mitropoulos, Nikos Kazantzakis, George Seferis, Henry Miller, Paul Robeson, and Ted Shawn.

Brilliant and gorgeous, with floor-length auburn hair, Palmer was a wealthy New York debutante who studied Greek at Bryn Mawr College before turning her back on conventional society to live a lesbian life in Paris. She later followed Raymond Duncan (brother of Isadora) and his wife to Greece and married the Greek poet Angelos Sikelianos in 1907. With single-minded purpose, Palmer re-created ancient art forms, staging Greek tragedy with her own choreography, costumes, and even music. Having exhausted her inheritance, she returned to the United States in 1933, was blacklisted for criticizing American imperialism during the Cold War, and was barred from returning to Greece until just before her death.

Drawing on hundreds of newly discovered letters and featuring many previously unpublished photographs, this biography vividly re-creates the unforgettable story of a remarkable nonconformist whom one contemporary described as “the only ancient Greek I ever knew.”

Artemis Leontis is professor of modern Greek and chair of the Department of Classical Studies at the University of Michigan. She is the author of Topographies of Hellenism and the coeditor of “What These Ithakas Mean...”: Readings in Cavafy, among other books. She lives in Ann Arbor, Michigan.

"[Eva Palmer Sikelianos] dazzled as biography and scholarship. . . . Few page-turners are so thoroughly indexed and annotated. Leontis rescues her subject from stiff hagiography ('the most influential philhellene after Lord Byron'), and stirs her to life like a breeze through drapery."—A. E. Stallings, Times Literary Supplement

"[A] fascinating account. . . . All of Eva's varied, determined life is crafted together by Leontis. . . . [T]his Life has something of the quality of Eva’s own determined artistry."—Oliver Taplin, Times Literary Supplement

"This is a powerful reclamation of a life it has suited others to place in the shadows, and a well-deserved appreciation of Eva’s own legacy."—Liz Gloyn, Times Higher Education

"A well-researched and well-written look at the life of the woman who brought ancient Greek culture from an idea into practice in the modern era."—Eleni Sakellis, National Herald

"An enlightening, important biography of a woman who could be both brashly anachronistic and remarkably current."—Brigit Katz, Hyperallergic

"[Artemis] Leontis’s biography of Eva Palmer Sikelianos, on whom she must be regarded as the supreme authority, is a passionate and yet objective analysis of a complex figure whose triumphs were also her tragedy and whose life, so acutely mapped here, was a chronicle of vision, confusion, passion and disillusion, compellingly illuminating episodes in modern Greek cultural history. . . . Read this book."—Richard Pine, C.20 – An International Journal

"Leontis has written an important book that ideally illustrates the extremely complex personality of Eva Palmer Sikelianos, the American heiress and wife of Greek poet Angelos Sikelianos, and as a result has readjusted the focus on several areas of the cultural landscape of Greece in the early decades of the 20th century, proving Palmer Sikelianos' intimate association to and pivotal influence over them. At the same time, Leontis' cultural biography of Palmer Sikelianos pointedly underlines the necessity of applying multidisciplinary approaches to the proper understanding of complex cultural concepts, such as the effort to comprehend and define Hellenism in the 20th century."—Sophia Papaioannou, Classical Journal

“This is an important, inspired, and frequently riveting book. Artemis Leontis’s sophisticated storytelling is no small part of what makes it such a dynamic and successful biography.”—Emily Greenwood, Yale University

“I learned much from this important book, which ties many loose threads within the vast tapestry of cultural modernism.”—Fiona Macintosh, University of Oxford

"This groundbreaking book brings Eva Palmer Sikelianos's revolutionary, culture-changing work and life out of the shadows, throwing light into archival and historical recesses at every turn. Leontis expertly unfolds and contextualizes this figure who could not be contained by time, whose life work influenced the cultural direction of modern Greece, and who queered American culture in ways we have yet to recognize."—Eleni Sikelianos, poet and great-granddaughter of Eva Palmer Sikelianos