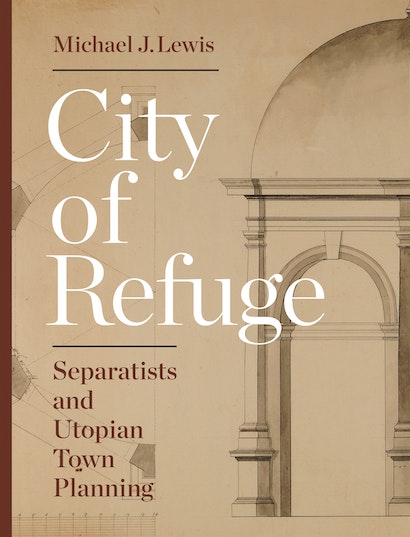 The vision of Utopia obsessed the nineteenth-century mind, shaping art, literature, and especially town planning. In City of Refuge, Michael Lewis takes readers across centuries and continents to show how Utopian town planning produced a distinctive type of settlement characterized by its square plan, collective ownership of properties, and communal dormitories. Some of these settlements were sanctuaries from religious persecution, like those of the German Rappites, French Huguenots, and American Shakers, while others were sanctuaries from the Industrial Revolution, like those imagined by Charles Fourier, Robert Owen, and other Utopian visionaries.

Because of their differences in ideology and theology, these settlements have traditionally been viewed separately, but Lewis shows how they are part of a continuous intellectual tradition that stretches from the early Protestant Reformation into modern times. Through close readings of architectural plans and archival documents, many previously unpublished, he shows the network of connections between these seemingly disparate Utopian settlements—including even such well-known town plans as those of New Haven and Philadelphia.

The most remarkable aspect of the city of refuge is the inventive way it fused its eclectic sources, ranging from the encampments of the ancient Israelites as described in the Bible to the detailed social program of Thomas More’s Utopia to modern thought about education, science, and technology. Delving into the historical evolution and antecedents of Utopian towns and cities, City of Refuge alters notions of what a Utopian community can and should be.

Michael J. Lewis is the Faison-Pierson-Stoddard Professor of Art History at Williams College. His books include Frank Furness: Architecture and the Violent Mind, The Gothic Revival, and American Art and Architecture. His essays and reviews have appeared in such publications as the Wall Street Journal and the New York Times.

"Few architectural historians today have Michael Lewis's skill and fluency in the language of built stuff. Precise, elegant descriptions of buildings and their elements, grounded in rigorous scholarship and motivated by the author’s obvious passion for his subject, make City of Refuge a pleasure to read. . . . This is a beautifully made book."—Kathy Edwards, ARLIS

"Lewis's elegantly composed and lavishly illustrated work helps us to understand more clearly the how and why of these early modern utopian experiments, and . . . offers a reminder of historic communal values that seem to have little influence in contemporary culture."—Christopher Silver, Indiana Magazine of History

"Impressive and fascinating. . . . Lewis treats us to not only a multifaceted history of the ideal city from fifteenth-century Italy to nineteenth century America, but has fashioned a thoroughly enjoyable and often-entertaining journey along the way. The book is exceptionally well written, and sumptuously illustrated. . . [A]n important contribution to our understanding of the evolution of the modern landscape, City of Refuge should be of interest to scholars of the history of architecture and city planning, as well those involved in religious, cultural, and intellectual studies."—Kenneth A. Breisch, Rennaissance Quarterly

"“Although it should have a place in every collection on cultural studies and architectural history, City of Refuge is too well researched, too elegantly written and too beautifully illustrated to be confined to a library shelf. It wants to be read, and read it should be. It reflects historic interests and informs current debate. Students and scholars of various disciplines alike—from utopian studies to urban design—will find it accessible, lucid, and very rewarding.”"—Jan Frohburg, Irish Journal of American Studies

"Masterful in its breadth and insights, City of Refuge takes a phenomenon in architecture and community development—the utopian city—and puts it into new perspective. Lucid and engaging, the book's exploration of the shaping of cities is as imaginative as it is rigorous, and it will become an essential text in urban history. A stunning achievement and an irresistible read."—Richard Longstreth, George Washington University

"In City of Refuge, Lewis is remarkably skilled—thorough, insightful, and even witty—in his ability to read carefully and creatively the surviving plans and architectural drawings of various devotional and religious communities in Europe and America. This fascinating narrative will significantly revise our ideas about nineteenth-century America."—Robert Fishman, Taubman College of Architecture and Planning, University of Michigan

"With exceptionally good writing, City of Refuge looks at the interaction between two traditions of utopian settlements, those of the Utopian Socialists and those of distinctly religious communities like the Moravians, that have usually been treated separately. This original and compelling book examines the exchange of ideas between the near simultaneous experiments taking place on both sides of the Atlantic, and the intricacies and difficulties of each settlement's history."—Joseph Siry, Wesleyan University