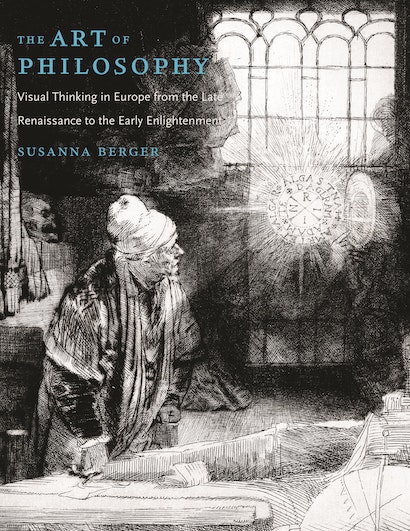 Delving into the intersections between artistic images and philosophical knowledge in Europe from the late sixteenth to the early eighteenth centuries, The Art of Philosophy shows that the making and study of visual art functioned as important methods of philosophical thinking and instruction. From frontispieces of books to monumental prints created by philosophers in collaboration with renowned artists, Susanna Berger examines visual representations of philosophy and overturns prevailing assumptions about the limited function of the visual in European intellectual history.

Rather than merely illustrating already existing philosophical concepts, visual images generated new knowledge for both Aristotelian thinkers and anti-Aristotelians, such as Descartes and Hobbes. Printmaking and drawing played a decisive role in discoveries that led to a move away from the authority of Aristotle in the seventeenth century. Berger interprets visual art from printed books, student lecture notebooks, alba amicorum (friendship albums), broadsides, and paintings, and examines the work of such artists as Pietro Testa, Léonard Gaultier, Abraham Bosse, Dürer, and Rembrandt. In particular, she focuses on the rise and decline of the “plural image,” a genre that was popular among early modern philosophers. Plural images brought multiple images together on the same page, often in order to visualize systems of logic, metaphysics, natural philosophy, or moral philosophy.

Featuring previously unpublished prints and drawings from the early modern period and lavish gatefolds, The Art of Philosophy reveals the essential connections between visual commentary and philosophical thought.

Susanna Berger is assistant professor of art history at the University of Southern California.

"This enquiry into philosophy and visual culture is full of original insight. . . . That this book provokes so many lines of inquiry testifies to its topic's richness. It makes an original contribution to both the intellectual history of the legacies of Aristotelianism, and the vibrant field of the relation between philosophy and visual culture. The generous illustrations make accessible much rare or unpublished material."—Kathryn Murphy, Apollo Magazine

"A remarkable, fascinating study, impressive in its detail and thorough in its treatment. . . . It is a revelation and a pleasure. It is of interest not only to art historians but to anyone curious about how many of our fundamental intellectual concepts were taught and passed down to us. It is altogether fascinating; the kind of book you never tire of reading. Perhaps one of its greatest virtues is to make us inordinately grateful for the diligence, seriousness and application of the people whose work it examines. Needless to say, Berger too displays those qualities in great measure."—Alan Dent, Penniless Press

"Princeton University Press is to be congratulated on the superb production values displayed throughout the volume. . . . In sum, I have nothing but admiration for the work as a whole."—Roger Ariew, Mind

"A remarkable, fascinating study, impressive in its detail and thorough in its treatment. As an object, the book is a delight. . . . Berger writes in a clear, uncluttered style avoids theoretical flights of fancy, organizes the material so it is accessible to the non-specialist and in her commentary is insightful and thought-provoking. . . . There is much more to be said about this excellent and remarkable book. It is a revelation and a pleasure. It is of interest not only to art historians but to anyone curious about how many of our fundamental intellectual concepts were taught and passed down to us. It is altogether fascinating; the kind of book you never tire of reading."—Alan Dent, Northern Review of Books

"Berger's discussion of the specific images very illuminating and the entire project a fascinating one. A review like this cannot adequately convey how impressive the book is. This is because you really need to see the works she is analyzing in order to see how striking they are and how instructive a guide to their interpretation Berger is."—Thomas E. Wartenberg, Journal of Aesthetics and Art Criticism

"[It] is one of the most strikingly illustrated and attractively designed books to appear in recent years, a publication which does full justice to Berger’s erudite, imaginative and theoretically ambitious research. As interdisciplinary as scholarship gets, it will swiftly become a key text for historians both of ‘the visual’ and of philosophy in the early modern period."—Paul Taylor, Burlington Magazine

"The beautiful reproductions combined with Berger's meticulous transcriptions and her clear and lively analyses make for a fascinating read."—Marieke M. A. Hendriksen, Art Newspaper

"The beautiful reproductions combined with Berger’s meticulous transcriptions and her clear and lively analyses make for a fascinating read. Thanks to her original research, an audience ranging from scholars to those with a general interest in Early Modern art and intellectual history can now access and understand this rich collection of very rare images and documents, which remained unseen for so long."—Marieke M.A. Hendriksen, The Art Newspaper

"Berger's research provides much stimulation for our own thought and her book de­serves to be itself the subject of epistemological debate."—Patricia Emison, Print Quarterly

"Focusing mainly on the seventeenth century, The Art of Philosophy explores the different ways in which visual culture enters into the teaching, study, and practice of philosophy. Highly original and filled with convincing arguments, this book is virtually the only treatment of a fascinating and largely unknown area in the history of philosophy."—Daniel Garber, Princeton University

"This brilliant and rich book demonstrates the function and meaning of so-called broadsides, large-scale prints that were used to assist in teaching Aristotelian philosophy in Europe during the seventeenth century. An extraordinary examination of compelling material, this is one of the most exciting works dealing with early modern art that I have come across in a long time."—Hanneke Grootenboer, University of Oxford