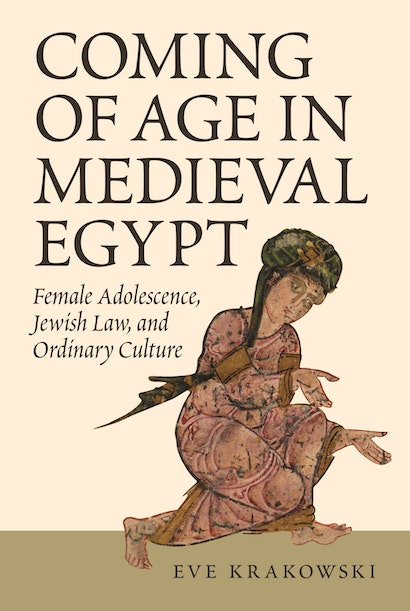 Much of what we know about life in the medieval Islamic Middle East comes from texts written to impart religious ideals or to chronicle the movements of great men. How did women participate in the societies these texts describe? What about non-Muslims, whose own religious traditions descended partly from pre-Islamic late antiquity?

Coming of Age in Medieval Egypt approaches these questions through Jewish women’s adolescence in Fatimid and Ayyubid Egypt and Syria (c. 969–1250). Using hundreds of everyday papers preserved in the Cairo Geniza, Eve Krakowski follows the lives of girls from different social classes—rich and poor, secluded and physically mobile—as they prepared to marry and become social adults. She argues that the families on whom these girls depended were more varied, fragmented, and fluid than has been thought. Krakowski also suggests a new approach to religious identity in premodern Islamic societies—and to the history of rabbinic Judaism. Through the lens of women’s coming-of-age, she demonstrates that even Jews who faithfully observed rabbinic law did not always understand the world in rabbinic terms. By tracing the fault lines between rabbinic legal practice and its practitioners’ lives, Krakowski explains how rabbinic Judaism adapted to the Islamic Middle Ages.

Coming of Age in Medieval Egypt offers a new way to understand how women took part in premodern Middle Eastern societies, and how families and religious law worked in the medieval Islamic world.

Eve Krakowski is assistant professor of Near Eastern Studies and Judaic Studies at Princeton University.

"Coming of Age in Medieval Egypt is an excellent book based on solid research and replete with brilliant insights. It marks a new, groundbreaking phase in the historical study of the Geniza society and constitutes a major contribution to the social and legal history of Islamicate cultures as well as to gender studies more generally."—Miriam Frenkel, Al-Masāq

"This breathtaking triumph of research and synthesis brings to life the young Jewish women who inhabited the medieval Islamic world. From documents preserved in the Cairo Geniza, a synagogue depository of discarded writings, Eve Krakowski follows Jewish girls on the cusp of adulthood and explores the complex ties that existed between religious traditions and social reality. An extraordinary achievement by a rising star."—Ivan G. Marcus, Yale University

"This brilliant and elegantly written book makes full use of Geniza texts in remarkably new ways. Eve Krakowski's exploration of Jewish girls’ coming-of-age is told through a rich tapestry of stories in which rabbinic norms of maturation and first marriage are displayed against a background of Middle Eastern and Islamicate values."—Mark R. Cohen, author of Maimonides and the Merchants: Jewish Law and Society in the Medieval Islamic World

"Coming of Age in Medieval Egypt is a pathbreaking analysis of female adolescence and family life that offers an altogether fresh and methodologically sophisticated perspective on Jewish women's lives in medieval Fustat. This much-needed and exemplary book is remarkable in the sheer quantity and range of primary sources used and represents the best of the new generation of research on materials from the Geniza."—Arnold E. Franklin, Queens College, CUNY

"This superb book is a major contribution to a number of fields, especially Islamicate intellectual, legal, and social history, and Jewish legal and social history. It draws on an astonishingly wide array of documentary sources and is certainly the most important work of social history from the Geniza since Goitein's A Mediterranean Society. With her wonderfully nuanced arguments, Krakowski provides a masterly analysis of the subject."—Jessica Goldberg, University of California, Los Angeles