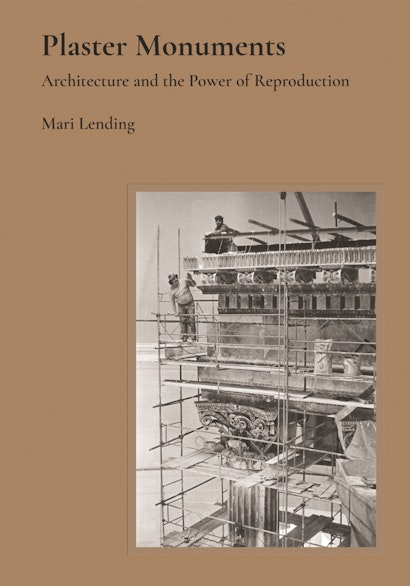 We are taught to believe in originals. In art and architecture in particular, original objects vouch for authenticity, value, and truth, and require our protection and preservation. The nineteenth century, however, saw this issue differently. In a culture of reproduction, plaster casts of building fragments and architectural features were sold throughout Europe and America and proudly displayed in leading museums. The first comprehensive history of these full-scale replicas, Plaster Monuments examines how they were produced, marketed, sold, and displayed, and how their significance can be understood today.

Plaster Monuments unsettles conventional thinking about copies and originals. As Mari Lending shows, the casts were used to restore wholeness to buildings that in reality lay in ruin, or to isolate specific features of monuments to illustrate what was typical of a particular building, style, or era. Arranged in galleries and published in exhibition catalogues, these often enormous objects were staged to suggest the sweep of history, synthesizing structures from vastly different regions and time periods into coherent narratives. While architectural plaster casts fell out of fashion after World War I, Lending brings the story into the twentieth century, showing how Paul Rudolph incorporated historical casts into the design for the Yale Art and Architecture building, completed in 1963.

Drawing from a broad archive of models, exhibitions, catalogues, and writings from architects, explorers, archaeologists, curators, novelists, and artists, Plaster Monuments tells the fascinating story of a premodernist aesthetic and presents a new way of thinking about history’s artifacts.

Mari Lending is professor of architectural history and theory at the Oslo School of Architecture and Design. Her books include, with Mari Hvattum, Modelling Time and, with Peter Zumthor, A Feeling for History.

"An excellent book . . . about the desire on the part of nineteenth-century museums to collect reproductions at least as much as originals in order to demonstrate the history of art in as systematic and comprehensive way as possible [and] illustrated with wonderful images of cast collections."—Charles Saumarez Smith

"It is timely amid new contexts for preservation and when reproduction technologies are advancing, that Lending’s analysis reveals the significance of their plaster precursors."—Olivia Horsfall Turner, Apollo

"This is a marvellous book, an original contribution to our understanding of how plaster casts of sculpture and architectural elements were manufactured and displayed in museums throughout Europe and America, which makes important points concerning their cultural, political, educational and philosophical significance."—James Stevens Curl, Times Higher Education

"As Lending argues, the plaster monument was a part of the separation of originals and copies in the nineteenth century, a topic that continues into the twenty-first century. . . . Despite new media, technical methods and intellectual frameworks, the cast monument remains a key part of our cultural context and our interaction with the past."—Matthew Wells, Burlington Magazine

"The first history of the rise and fall of architectural casts. . . . Invaluable for students of museum history, not least for its excellent illustrations."—James Hall, The Art Newspaper

"There is much to learn from this rich study—how buildings and their representations always form a strange symbiosis, the ways we encounter architecture, and how monuments are always in flux. . . . [The book] is superbly illustrated, including archival documents and evocative photographs of cast galleries as they originally appeared."—Lisa Godson, Journal of Design History

"Lending weaves a vast scholarship around the objects at hand. . . . Plaster Monuments must be read cover to cover lest the reader risk missing brilliant insights offered in the most unexpected places."—Can Bilsel, Journal of the Society of Architectural Historians

"With impeccable scholarship and a sure sense of narrative, Mari Lending embarks her reader on a fascinating exploration of what these casts, once considered as precious and certainly expensive to produce, represented for their 19th-century sponsors. . . . Starting from an inquiry into a long-lost practice, Plaster Monuments: Architecture and the Power of Reproduction achieves much more than making its reader aware of what once was. It triggers important questions about architecture both as a discipline and as a mediated presence."—Antoine Picon, Architecture Histories

"[A] fascinating exploration. . . . Lending’s evocative prose is accompanied by numerous well- chosen illustrations, many previously unpublished. These images, together with her exciting archival discoveries and rich interpretation, make a compelling argument for “the power of reproduction” to shape our understanding of buildings. Plaster Monuments is a welcome reminder that the auratic value of the monument’s absolute originality is as much a fiction as the idea of its unlimited, transparent reproducibility. The book also serves as a timely invitation to consider the contemporary forms of technical mediation without which our own discourses of architectural history and preservation would be unthinkable."—Joseph L. Clarke, Future Anterior: Journal of Historic Preservation, History, Theory, and Criticism

"Mari Lending takes readers on a fascinating journey, revisiting monuments and places that stand out, not because of their uniqueness and authenticity, but because they somehow simulate these qualities. Extremely well-researched, Plaster Monuments offers a compelling reflection on what makes up architecture's vitality."—Hilde Heynen, University of Leuven

"Plaster casts of architectural monuments were among the most prestigious and conspicuous features of the museums and art galleries established in the urban centers of the nineteenth century. Mari Lending's engaging and lively book is the first sustained inquiry into architectural cast collections, which were often, as in the case of the Metropolitan Museum of Art, the founding collection for these institutions. Drawing on a wealth of previously unexplored archival sources and unpublished photographs, Lending guides readers on a Proustian journey of remembrance."—Caroline van Eck, University of Cambridge

"This book is about the reproduction in plaster of works of historic architecture, and their display in late nineteenth- and early twentieth-century museums in Europe and the United States. Plaster Monuments provides a rich historical account of the creation of these collections, the trade in casts, and the debates they gave rise to. There is no comparable book and this is an entirely new contribution to scholarship."—Adrian Forty, author of Words and Buildings

"Offering a wealth of insight and delight, this fascinating book discusses plaster casts of what it calls ‘monuments,' shown in museum collections and other displays around the world. It presents many intriguing and valuable ideas about the cultural, political, and philosophical significance of these cast models, from the late eighteenth century to the present."—Alexandra Stara, Kingston University, London