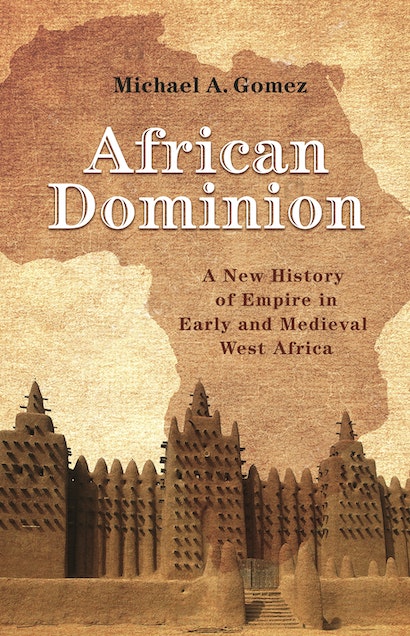 Pick up almost any book on early and medieval world history and empire, and where do you find West Africa? On the periphery. This pioneering book, the first on this period of the region’s history in a generation, tells a different story. Interweaving political and social history and drawing on a rich array of sources, including Arabic manuscripts, oral histories, and recent archaeological findings, Michael Gomez unveils a new vision of how categories of ethnicity, race, gender, and caste emerged in Africa and in global history more generally. Scholars have long held that such distinctions arose during the colonial period, but Gomez shows they developed much earlier.

Focusing on the Savannah and Sahel region, Gomez traces the exchange of ideas and influences with North Africa and the Central Islamic Lands by way of merchants, scholars, and pilgrims. Islam’s growth in West Africa, in tandem with intensifying commerce that included slaves, resulted in a series of political experiments unique to the region, culminating in the rise of empire. A major preoccupation was the question of who could be legally enslaved, which together with other factors led to the construction of new ideas about ethnicity, race, gender, and caste—long before colonialism and the transatlantic slave trade.

Telling a radically new story about early Africa in global history, African Dominion is set to be the standard work on the subject for many years to come.

Michael A. Gomez is the Silver Professor of History and Middle Eastern and Islamic Studies at New York University. His books include Black Crescent: African Muslims in the Americas; Exchanging Our Country Marks: The Transformation of African Identities in the Colonial and Antebellum South; Reversing Sail: A History of the African Diaspora; and Pragmatism in the Age of Jihad: The Precolonial State of Bundu.

"[A] groundbreaking study of early and medieval West Africa."—New Yorker

"African Dominion is an excellent, readable book on a region often forgotten by medieval historians. Apart from his most obvious and important contributions to gender and global history in the African context, Gomez blazes a path for future pre-colonial historians."—Paul A. Ludi, Origins

"Gomez deftly explores this complexity through the weaving of race, slavery, and identity in these empires, which were much more fluid than static. His work demonstrates not only the internal issues that caused both the rise and fall of these empires, but also their connections to North Africa and through that, to the larger Eurasian world."—T.M. Reese, Choice

"Michael Gomez’s survey of this long period more than updates the older synthesis, it revolutionizes it, transforms it, and will surely replace all that has come before it. Gomez’s task is an arduous one, and it requires all of its 500 pages to perform. He carefully analyzes existing textual criticism, consulting original language versions, integrates the oral traditions, teases out all manner of stories and reconstructs borders and for all this, still creates a narrative. It is a signal achievement to do this, balancing much of the nuancing work between text and footnotes."—John Thornton, International Journal of African Historical Studies

"This short review cannot do justice to the variety of insights African Dominion brings to our understanding of West African history. . . . I imagine that Michael Gomez's achievement will set the standard for scholarship on West Africa's empires for years to come."—Myles Osborne, Medieval Review

"African Dominion shines new light on empire in early and medieval West Africa and is bound to stimulate new discussions on this pivotal period in this region’s history."—Amir Syed, Islamic Africa

"The material [Gomez] presents is immensely appealing. It overturns the ways that we think about things geographically. It leaves one astounded to discover that history could have been written for so long with such an unawareness of the sophistication of political thinking and political action in these areas."—Hannah Skoda, FiveBooks

"African Dominion offers valuable insight into the kinds of materials available for analysis of the region across a time period in excess of 600 years, and states the case for the study of regions and peoples ostensibly assigned to the periphery. This work is as insightful as it is extensive. . . . [and] places West African history within the context of global flows of trade, gold and people, but also in terms of its exegesis of the philosophy of empires, and their constructions of ethnicity and lineage."—Joseph Da Costa, History: Journal of the Historical Association

"African Dominion is a stunning achievement. It restores precolonial Africa to historical attention and places the continent—marked by intelligent leadership, sophisticated knowledge, vibrant trans-Saharan commerce, and the dynamic impact of Islam—at the center of a global world. Michael Gomez offers a flowing narrative of innovations between the tenth and sixteenth centuries, when Africa was ahead of many other places around the world, and he provides a new understanding of caste, race, slavery, ethnicity, and gender as they evolved centuries ago. Brilliant, fascinating, and original, this is a revolutionary book."—Toyin Falola, University of Texas at Austin

"In this brilliant book, Michael Gomez, one of the most accomplished historians of Africa, completely renews our understanding of the long, rich story of West Africa by focusing on the continuity between the great empires of Ghana, Mali, and Songhay. He has succeeded in reconciling the history of Africa with itself and its diasporas."—Boubacar Barry, University Cheikh Anta Diop, Dakar, Senegal

"A masterful account of early West African history, this authoritative book fills a major gap. It will long remain one of the most important works on—and be essential to debates about—precolonial West Africa."—Andreas Eckert, Humboldt University of Berlin