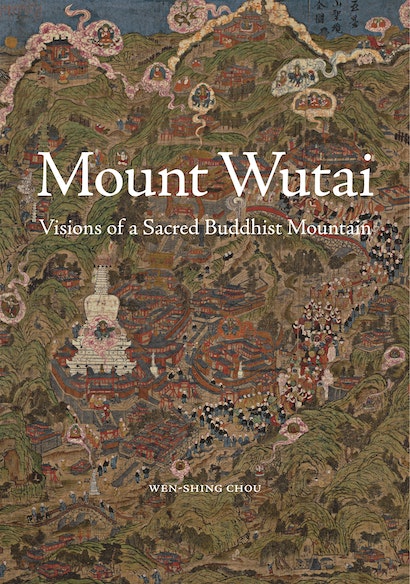 The northern Chinese mountain range of Mount Wutai has been a preeminent site of international pilgrimage for over a millennium. Home to more than one hundred temples, the entire range is considered a Buddhist paradise on earth, and has received visitors ranging from emperors to monastic and lay devotees. Mount Wutai explores how Qing Buddhist rulers and clerics from Inner Asia, including Manchus, Tibetans, and Mongols, reimagined the mountain as their own during the eighteenth and nineteenth centuries.

Wen-Shing Chou examines a wealth of original source materials in multiple languages and media — many never before published or translated—such as temple replicas, pilgrimage guides, hagiographic representations, and panoramic maps. She shows how literary, artistic, and architectural depictions of the mountain permanently transformed the site’s religious landscape and redefined Inner Asia’s relations with China. Chou addresses the pivotal but previously unacknowledged history of artistic and intellectual exchange between the varying religious, linguistic, and cultural traditions of the region. The reimagining of Mount Wutai was a fluid endeavor that proved central to the cosmopolitanism of the Qing Empire, and the mountain range became a unique site of shared diplomacy, trade, and religious devotion between different constituents, as well as a spiritual bridge between China and Tibet.

A compelling exploration of the changing meaning and significance of one of the world’s great religious sites, Mount Wutai offers an important new framework for understanding Buddhist sacred geography.

"Chou’s study, like the many examples of maps, gazetteers, paintings, murals, sculptures, and temples discussed in her work, continues to shape, guide, and construct our visions of Mount Wutai."—William J. Ma, Religion and the Arts

"richly detailed and beautifully illustrated. . . . a major contribution to the growing corpus of studies on Wutai shan."—Natalie Köhle, Journal of Chinese Religions

"This landmark work is timely and needed, and will leave an indelible mark on the scholarship of Mount Wutai."—Wei-Cheng Lin, author of Building a Sacred Mountain

"Providing a multidisciplinary approach from a variety of angles, this book situates Mount Wutai in the context of scholarship on other sacred mountains and within the long history of Mount Wutai's development and evolution as a sacred site. This well-researched book makes for an engaging read for those interested in sacred geography and the study of Chinese religions."—James Robson, author of Power of Place