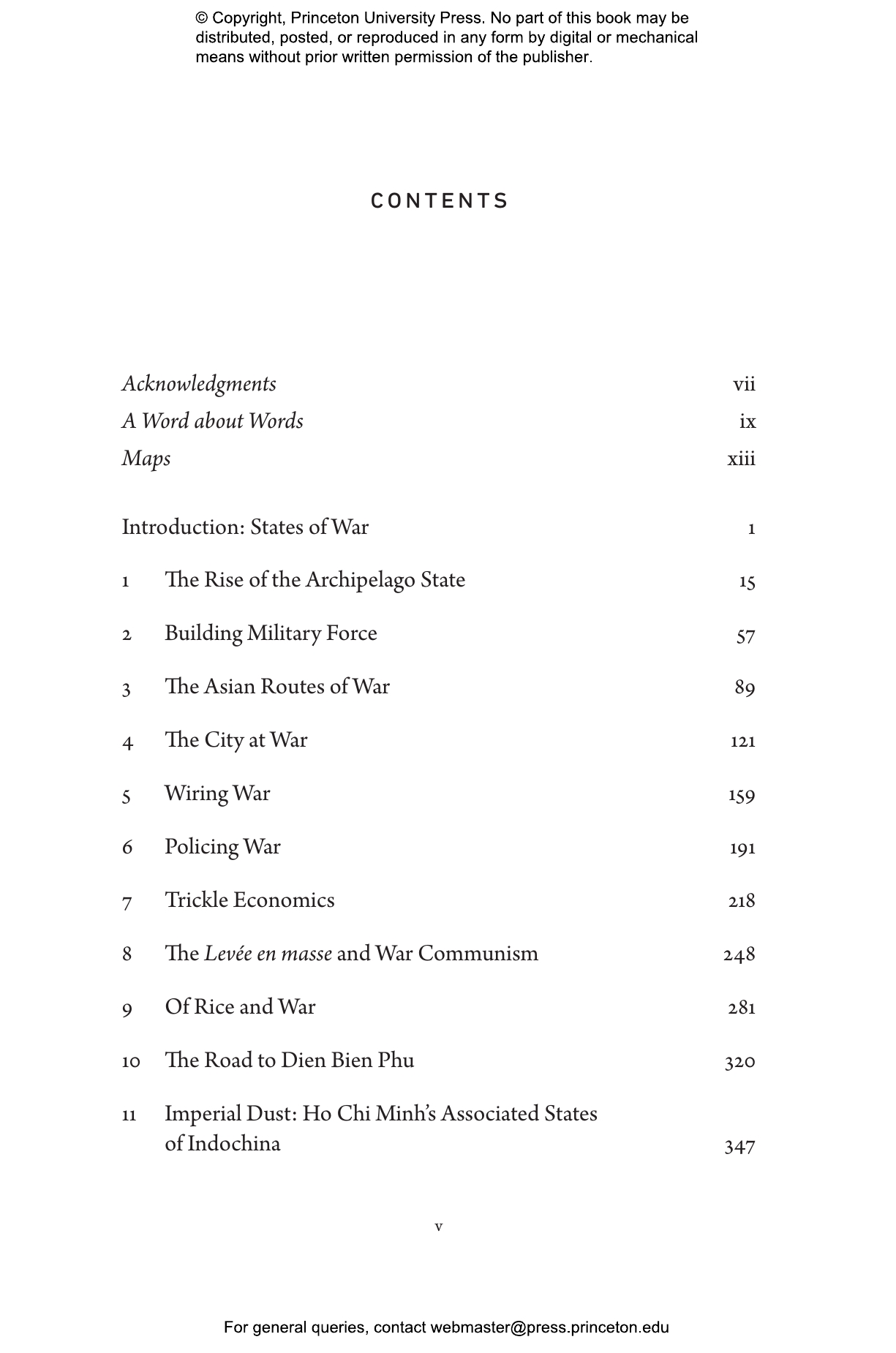 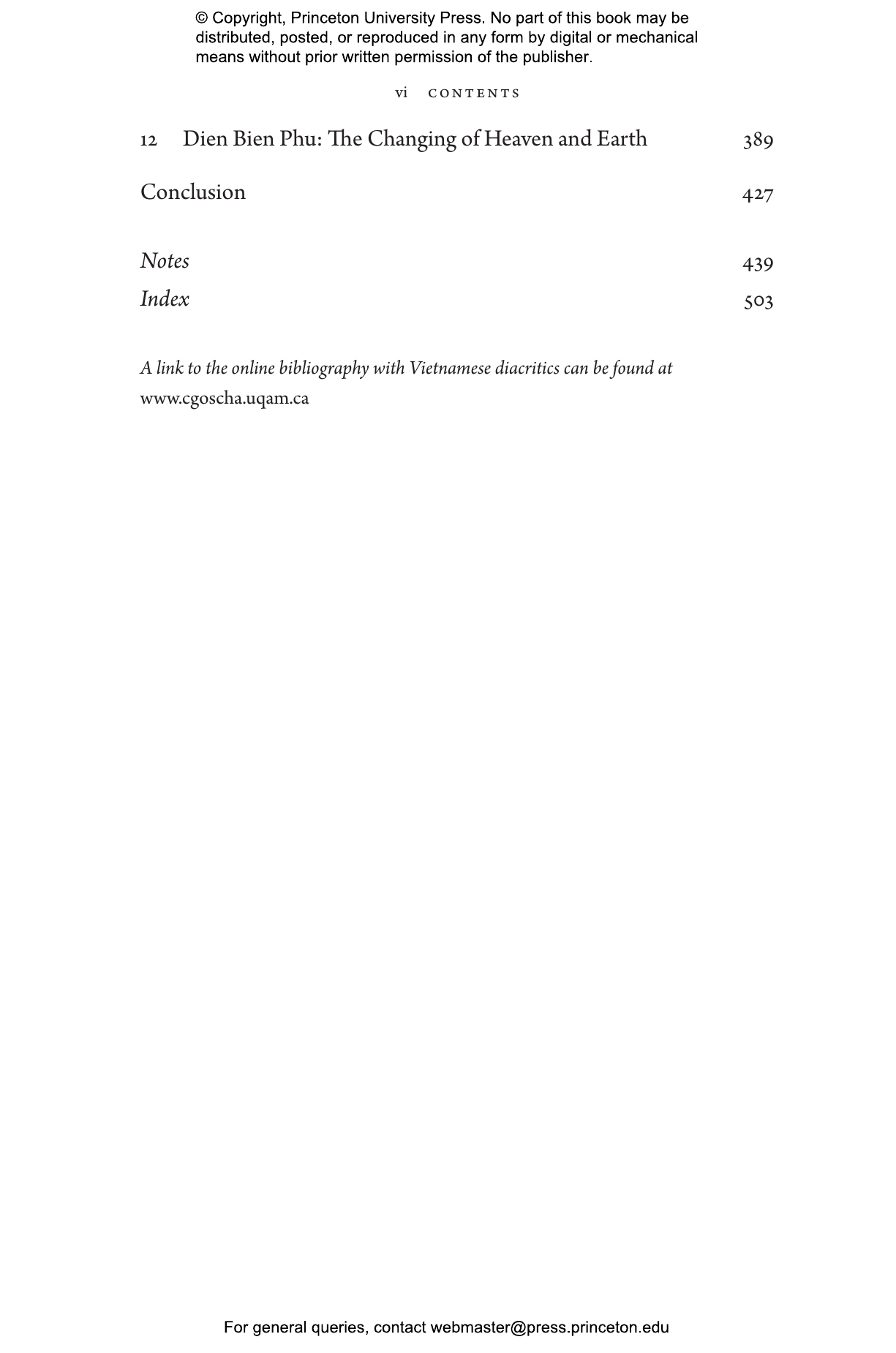 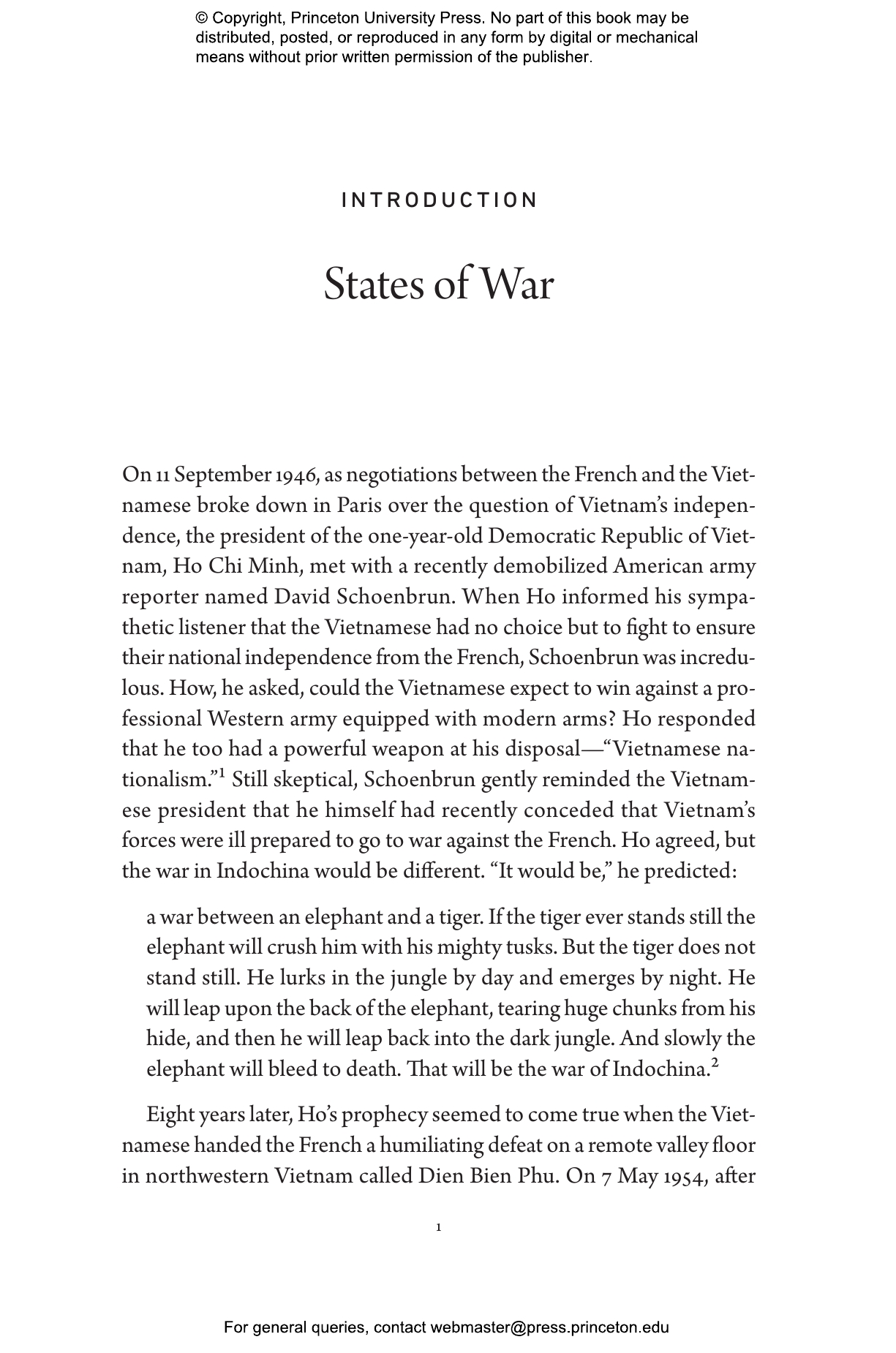 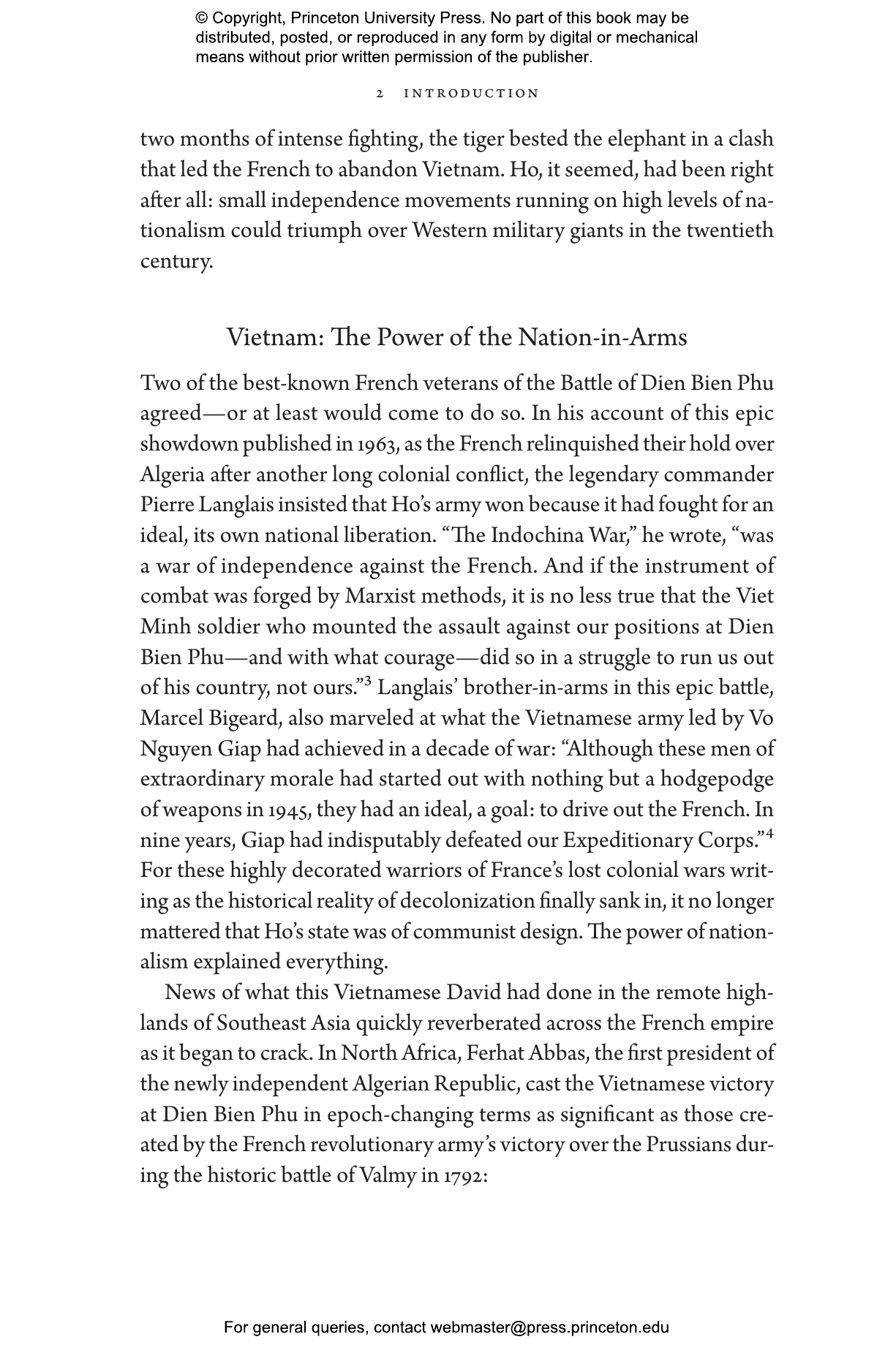 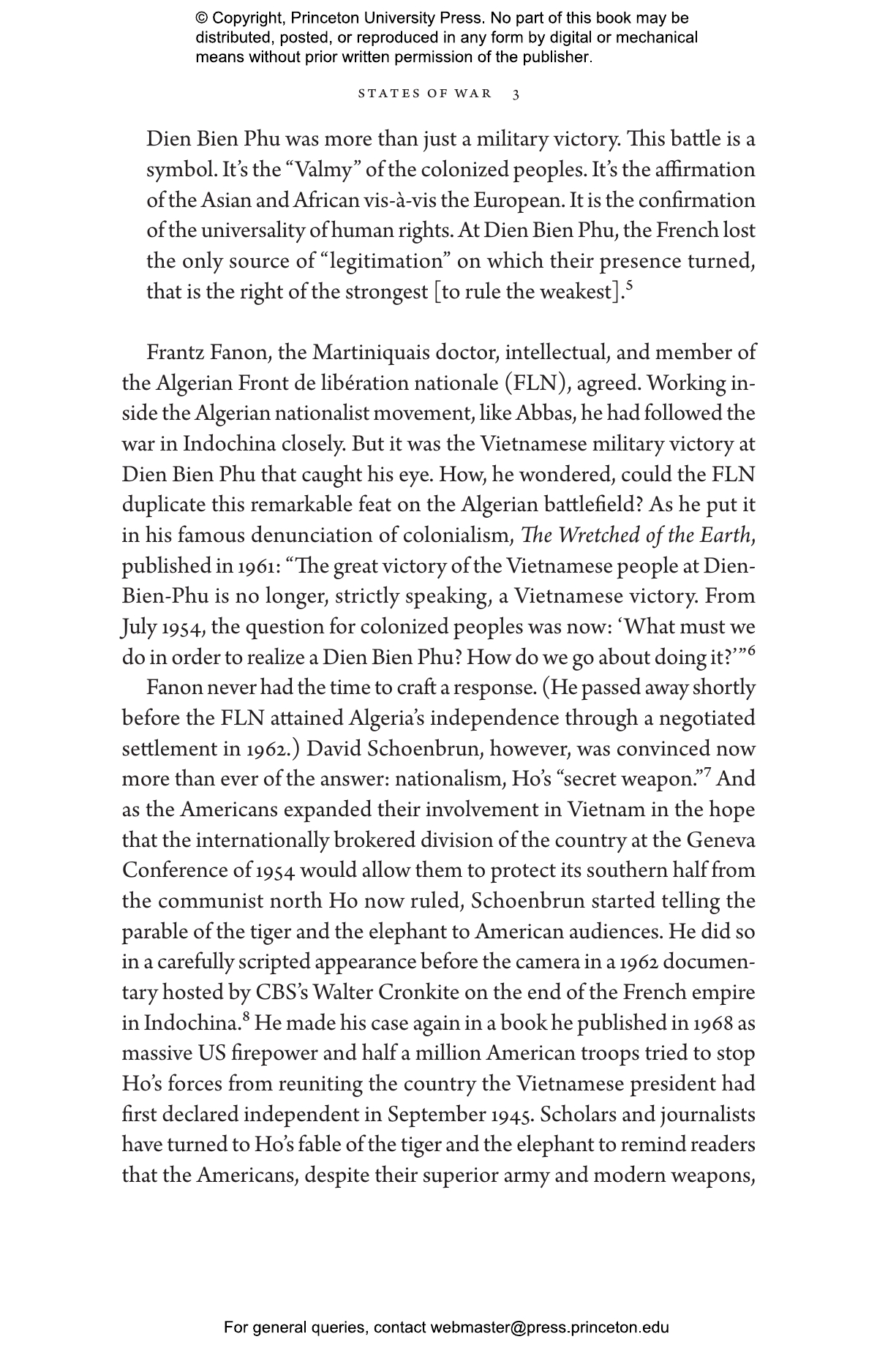 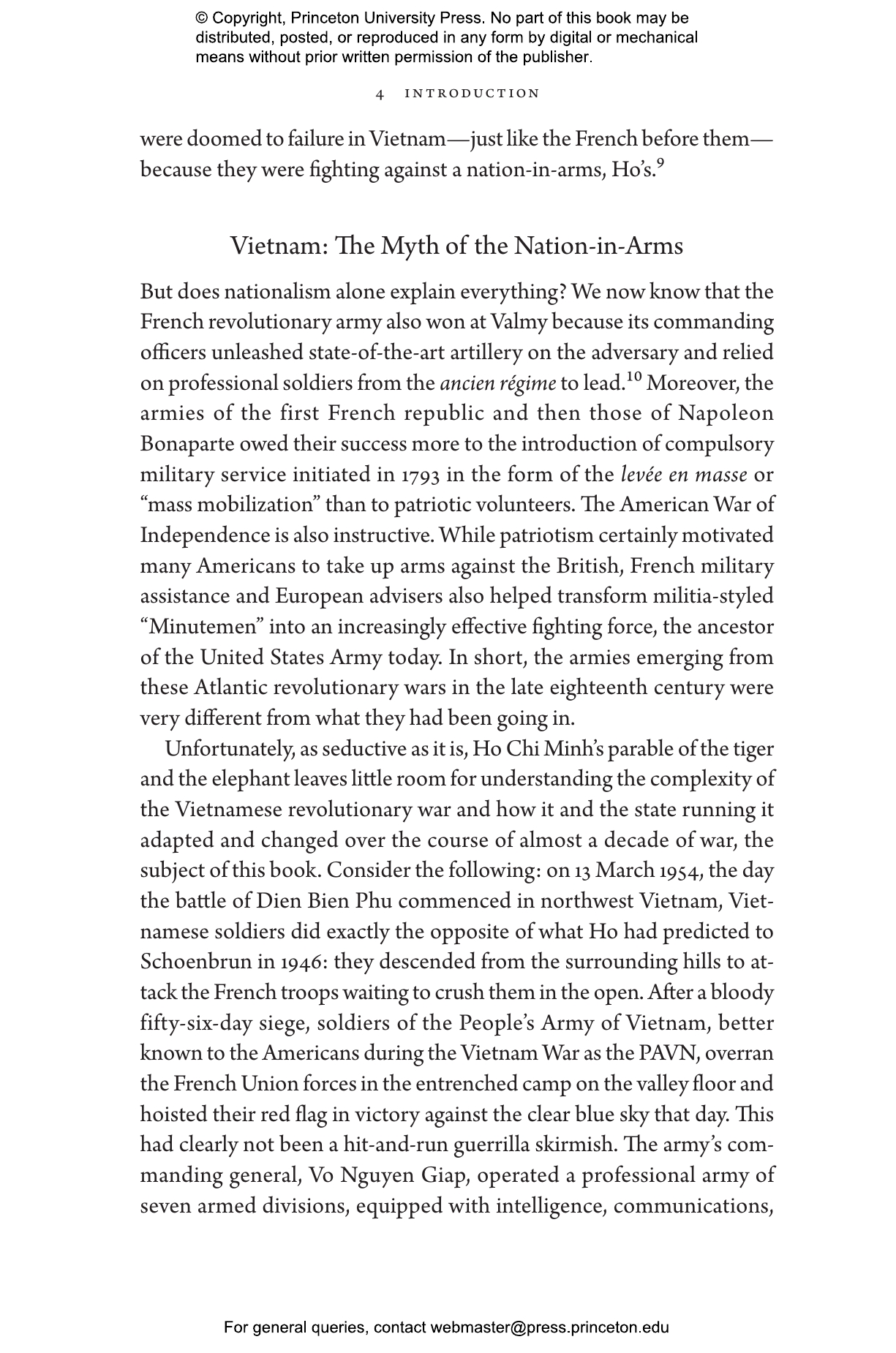 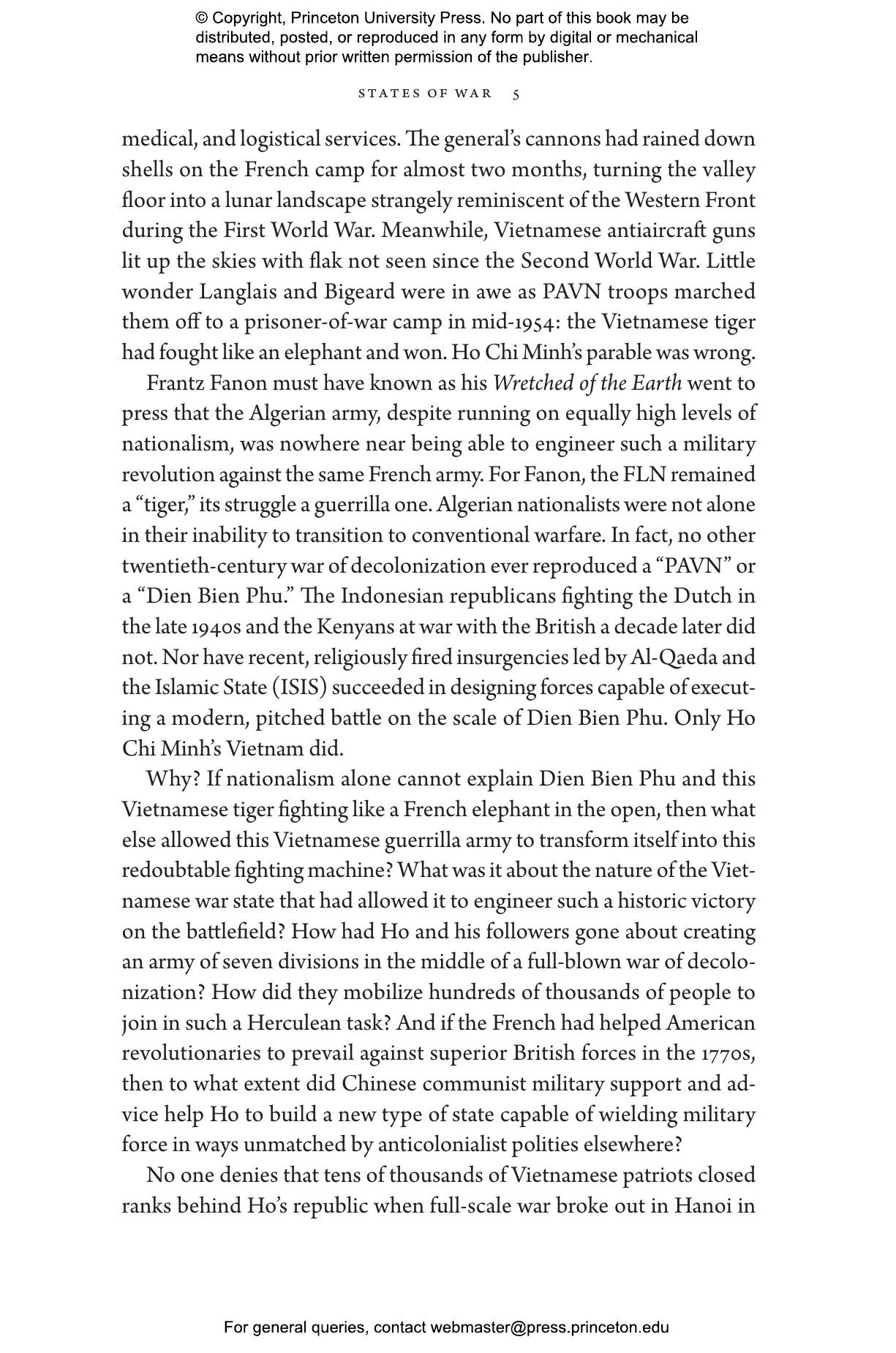 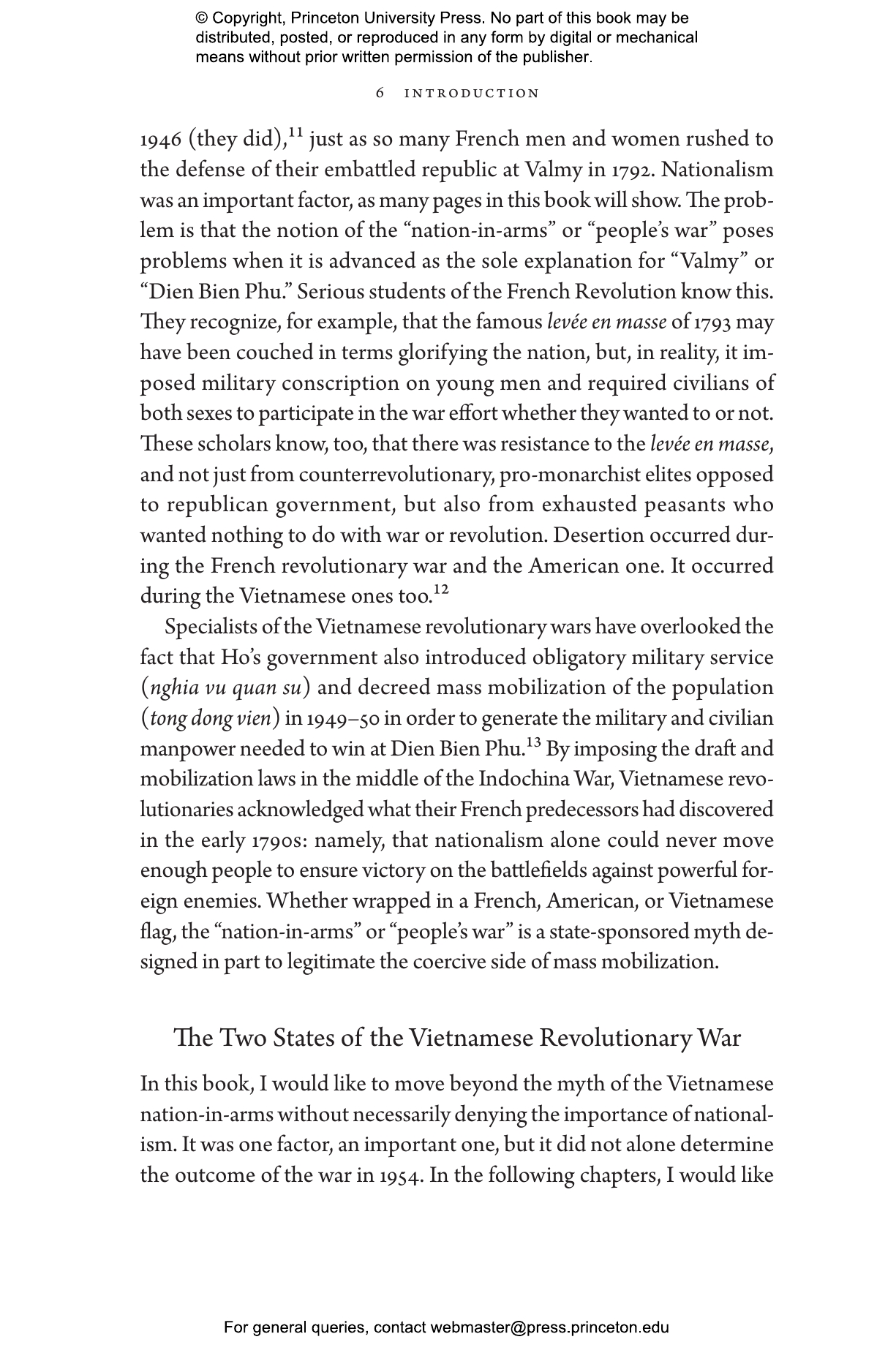 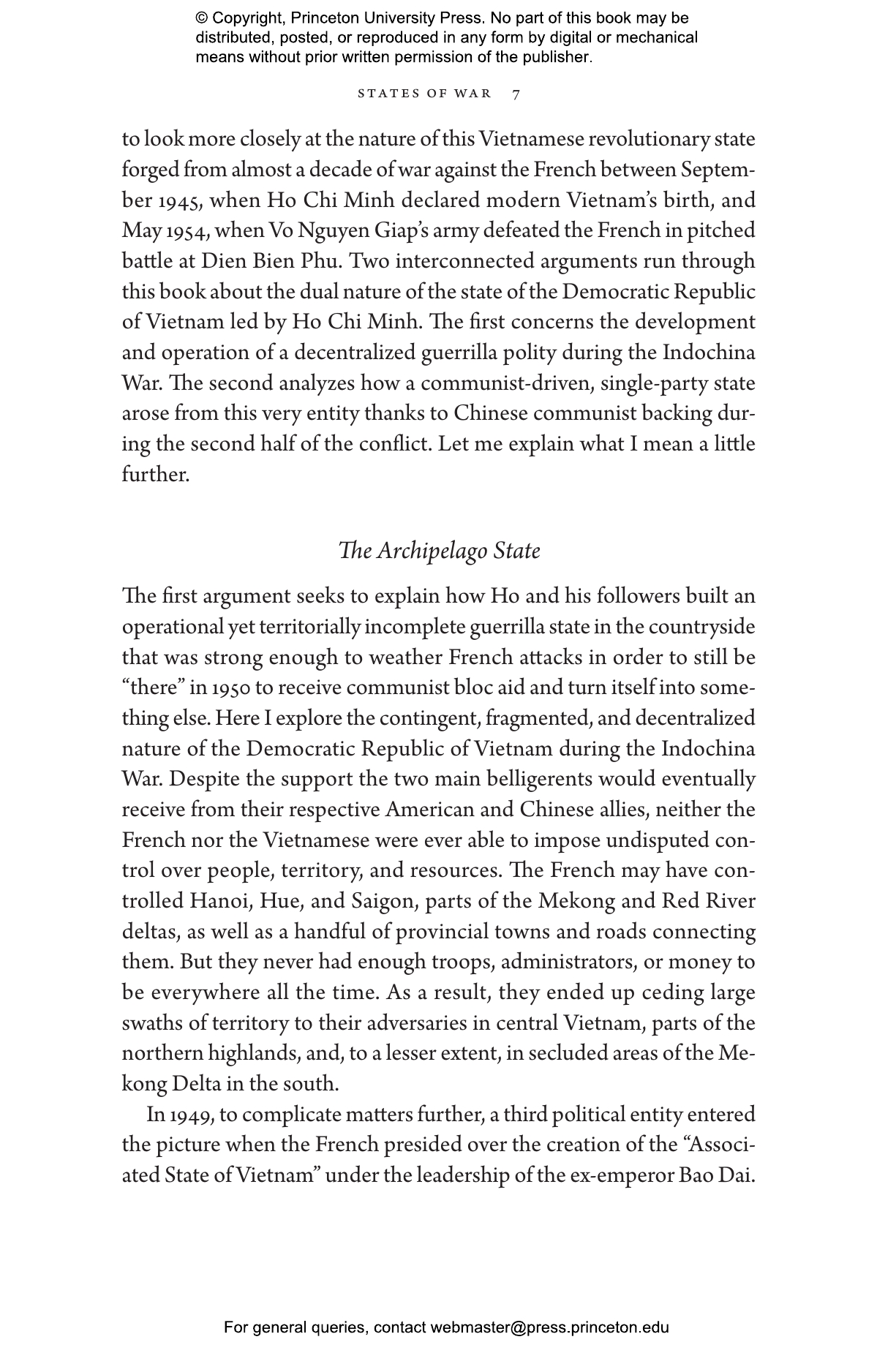 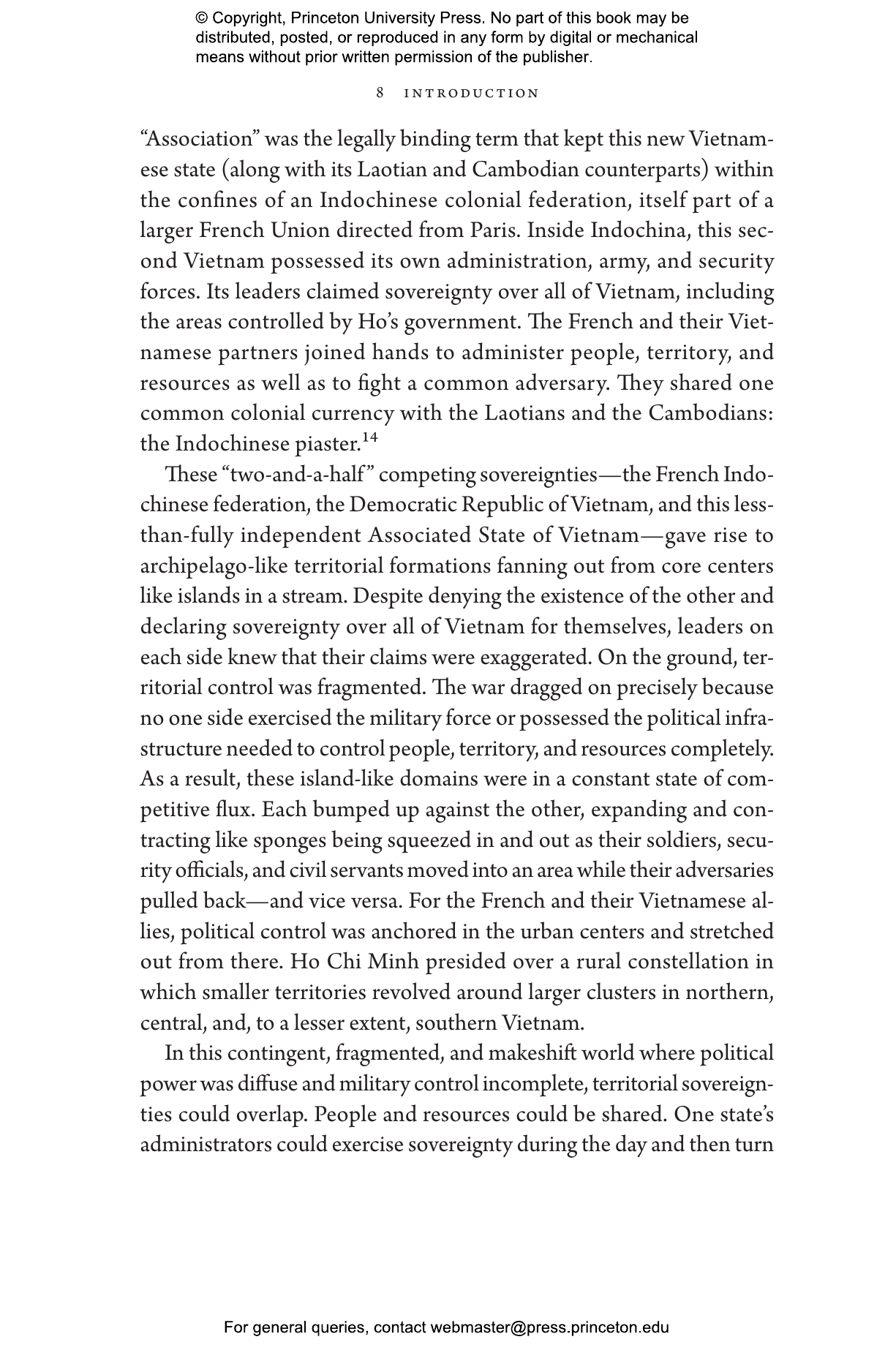 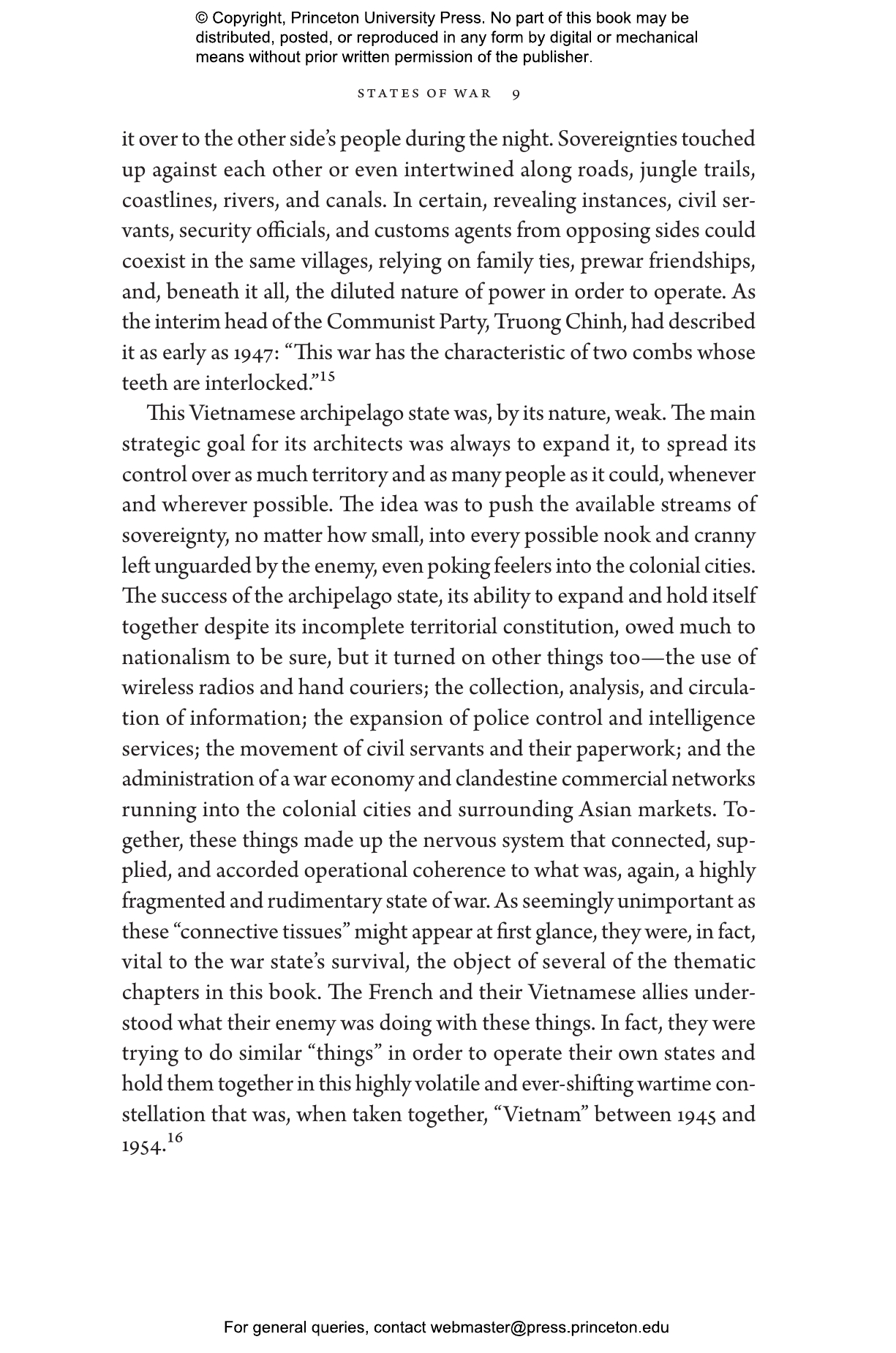 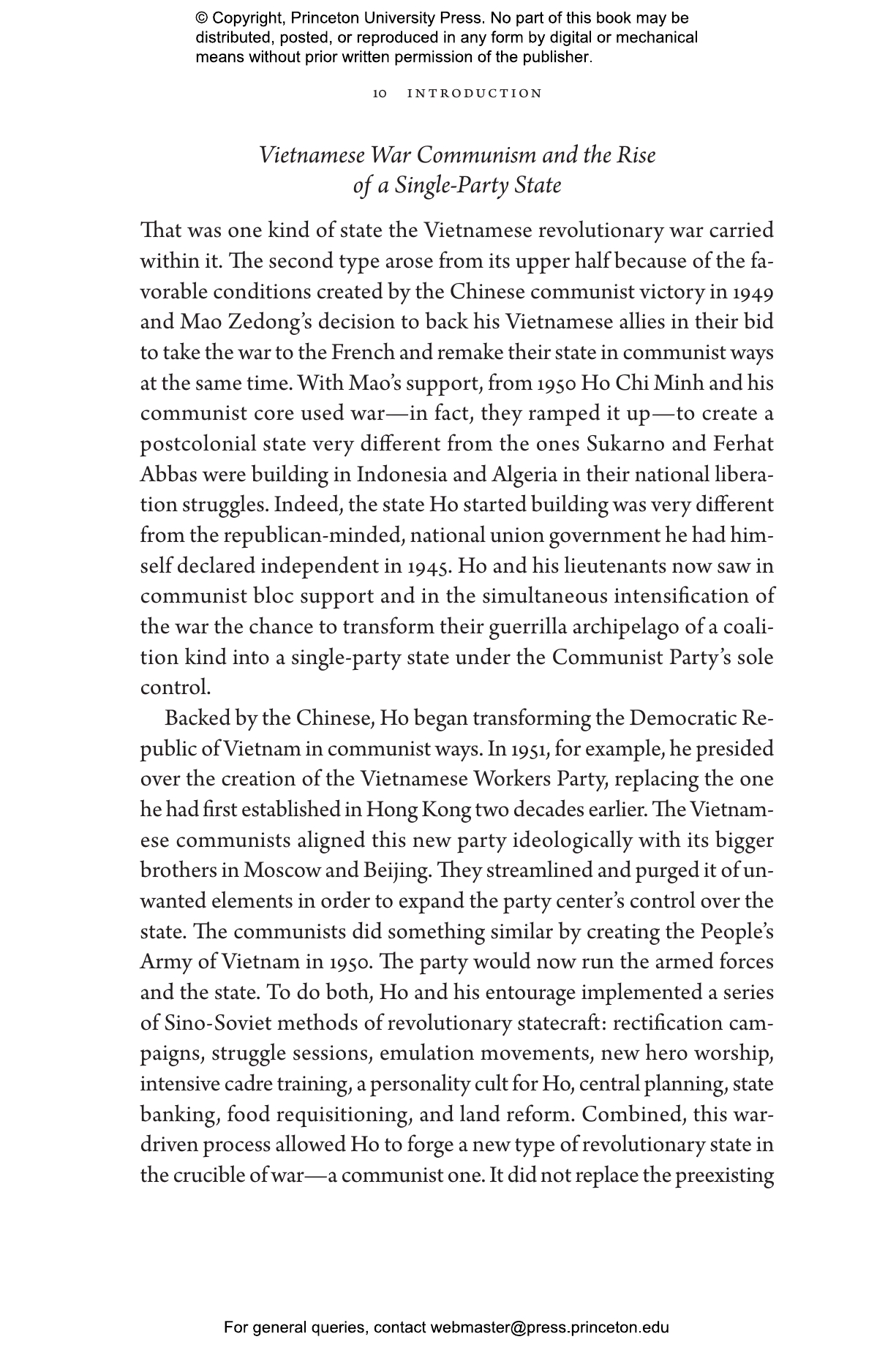 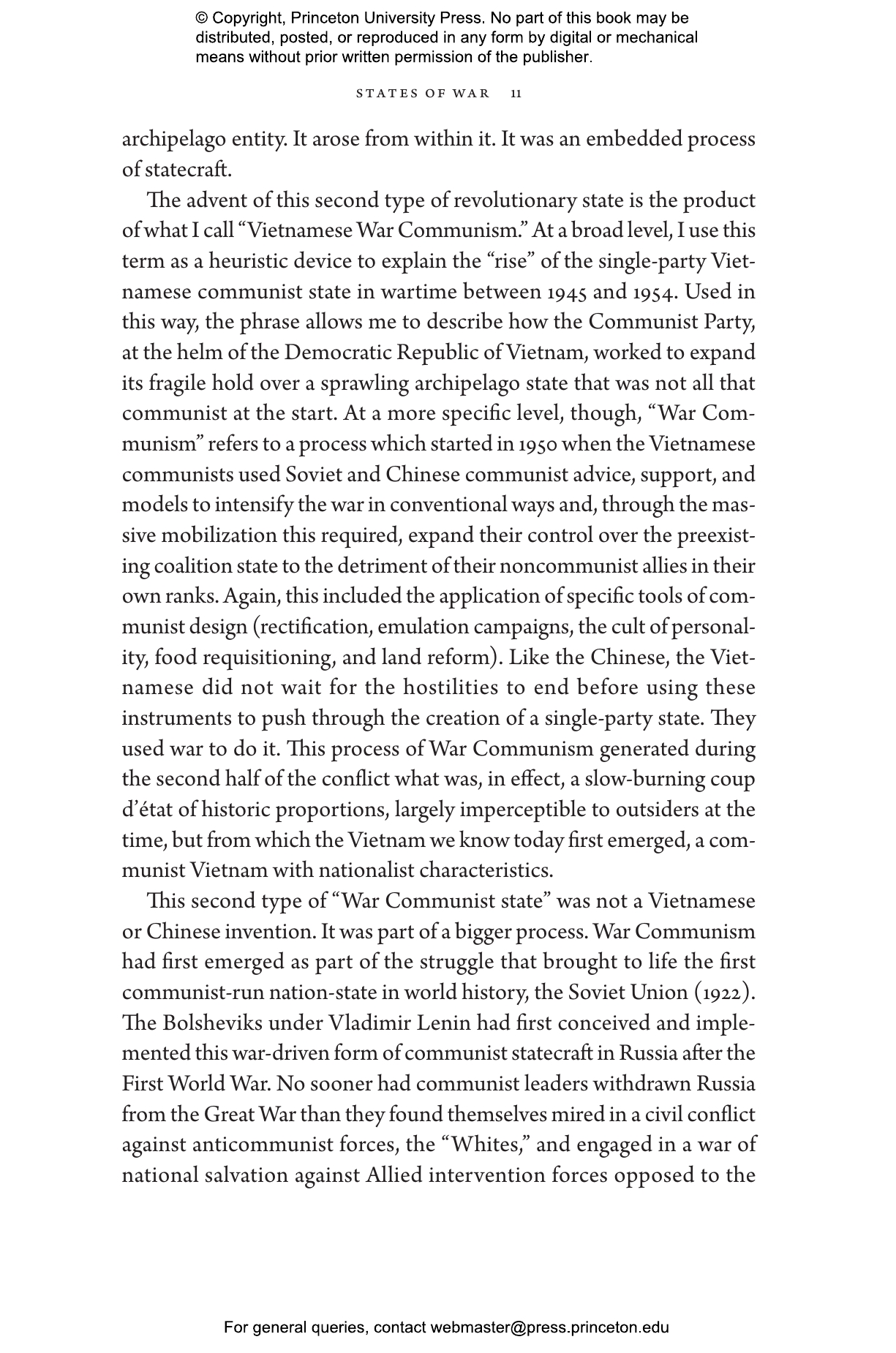 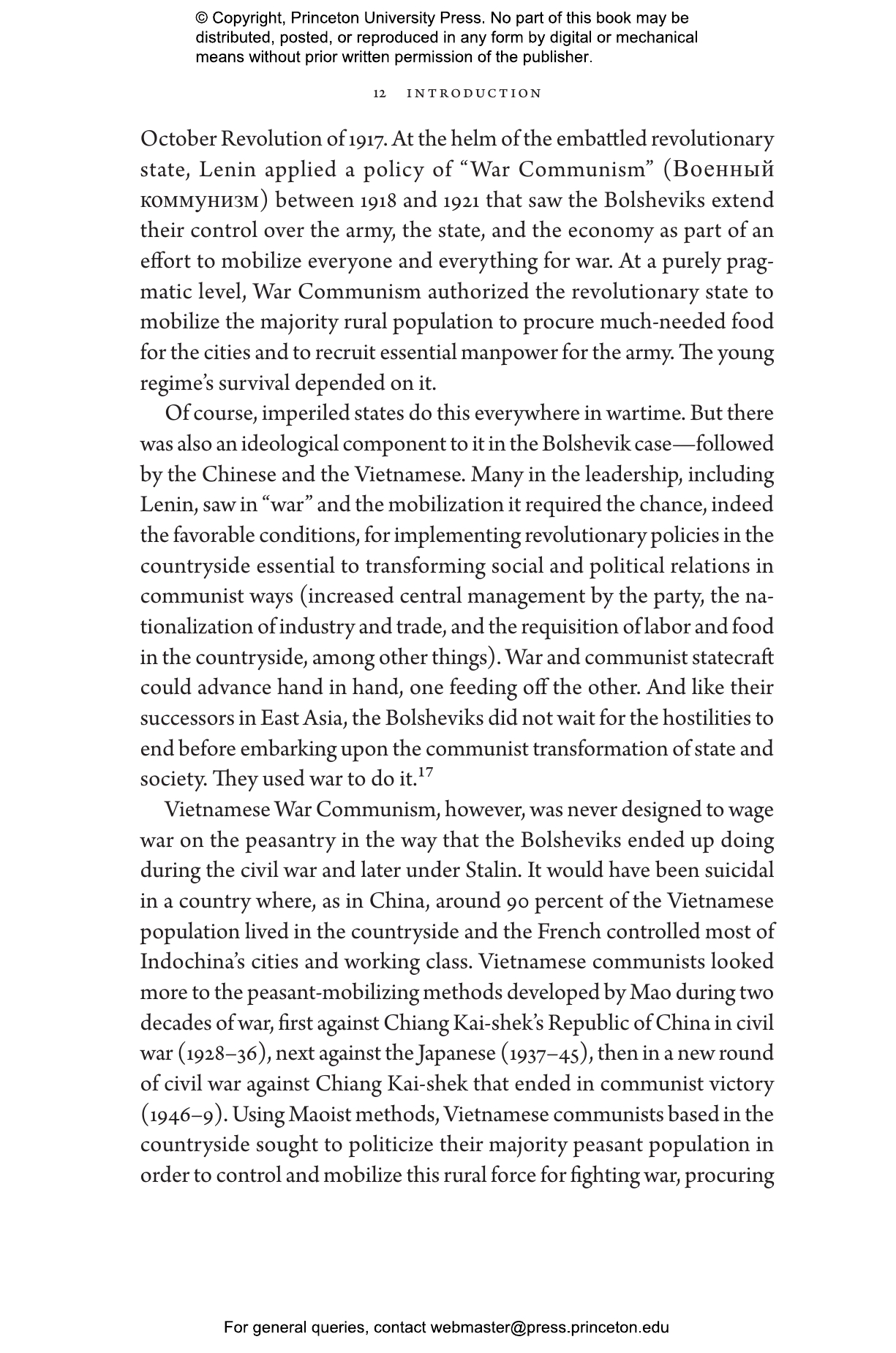 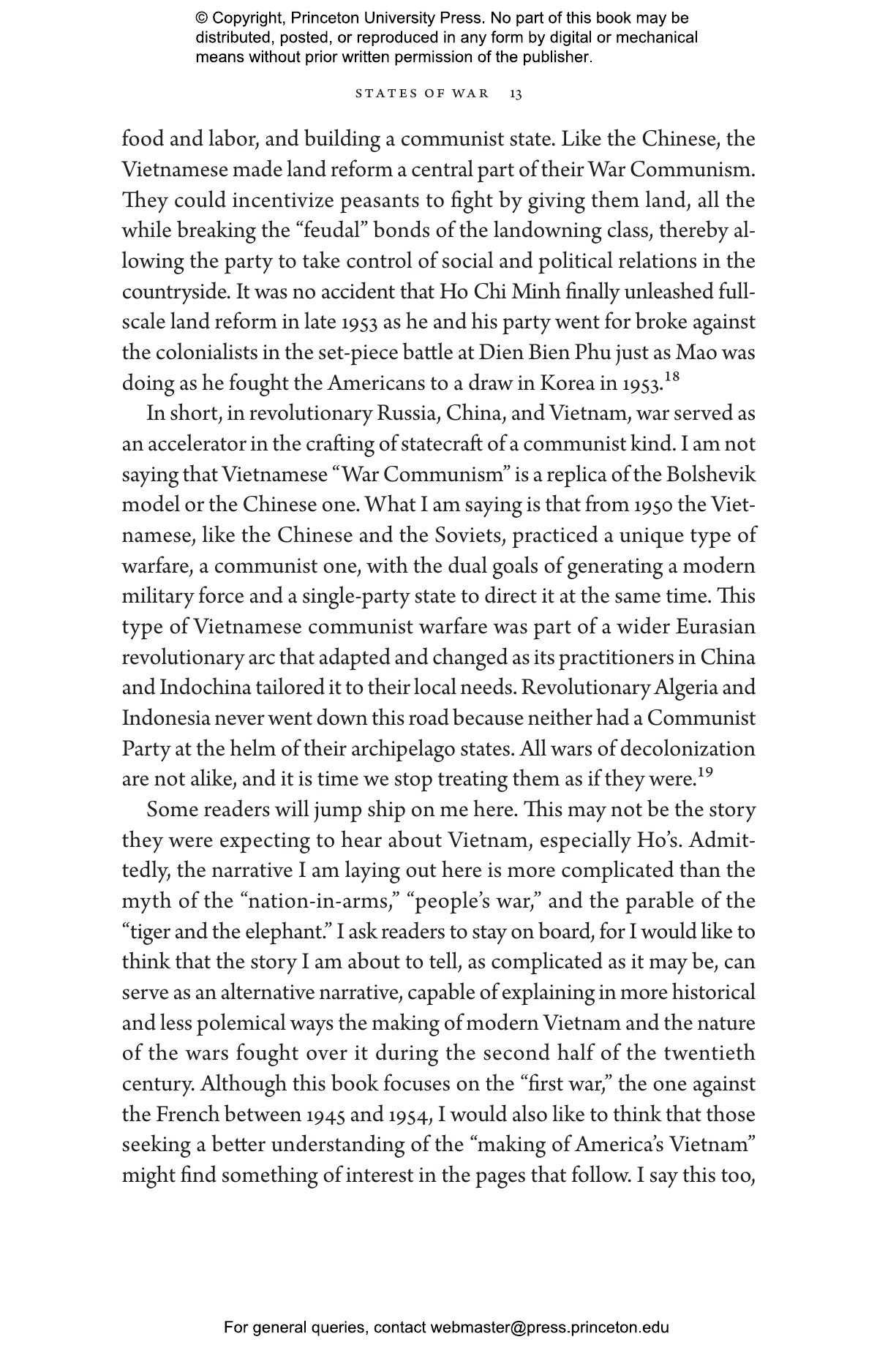 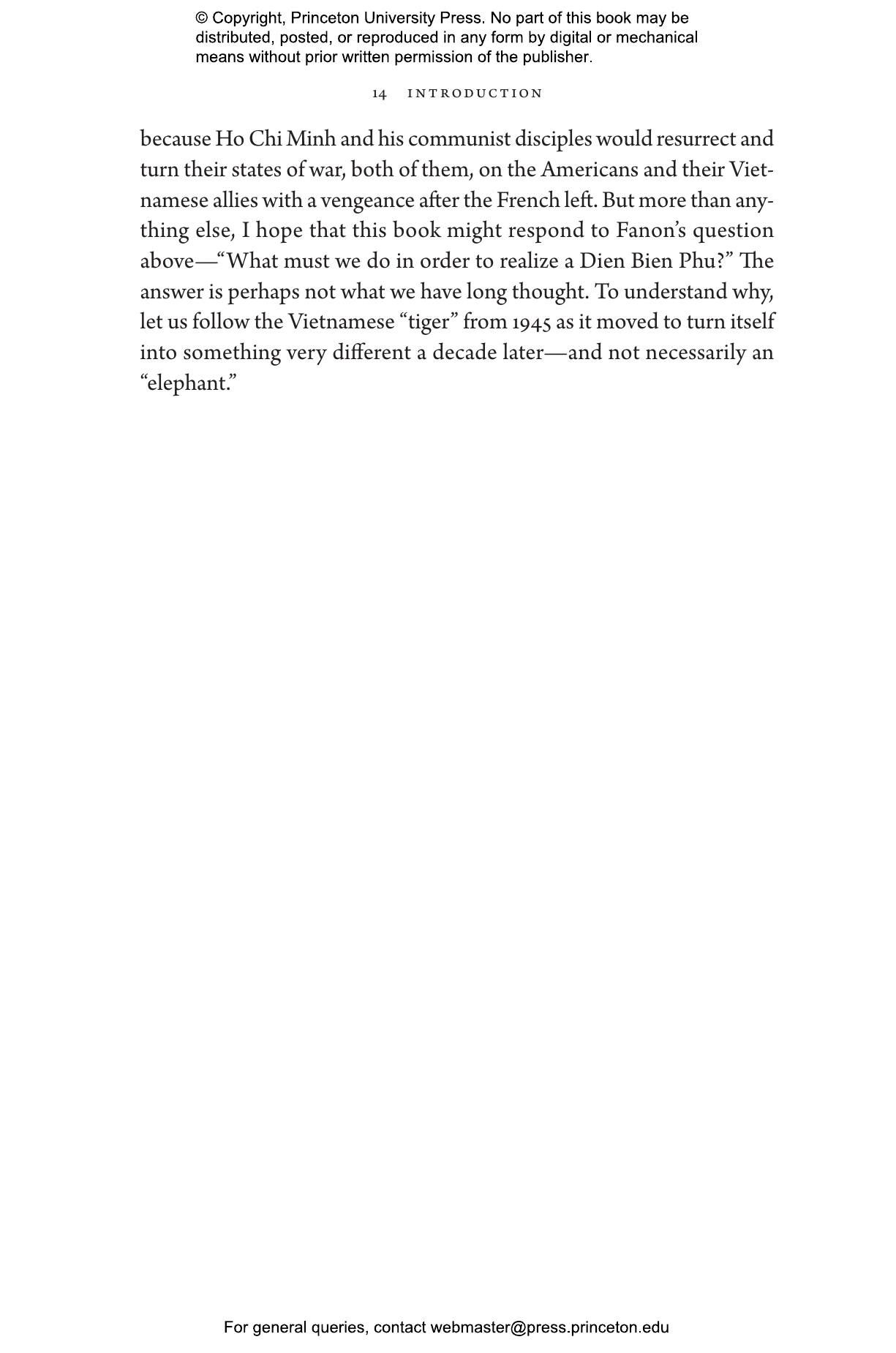 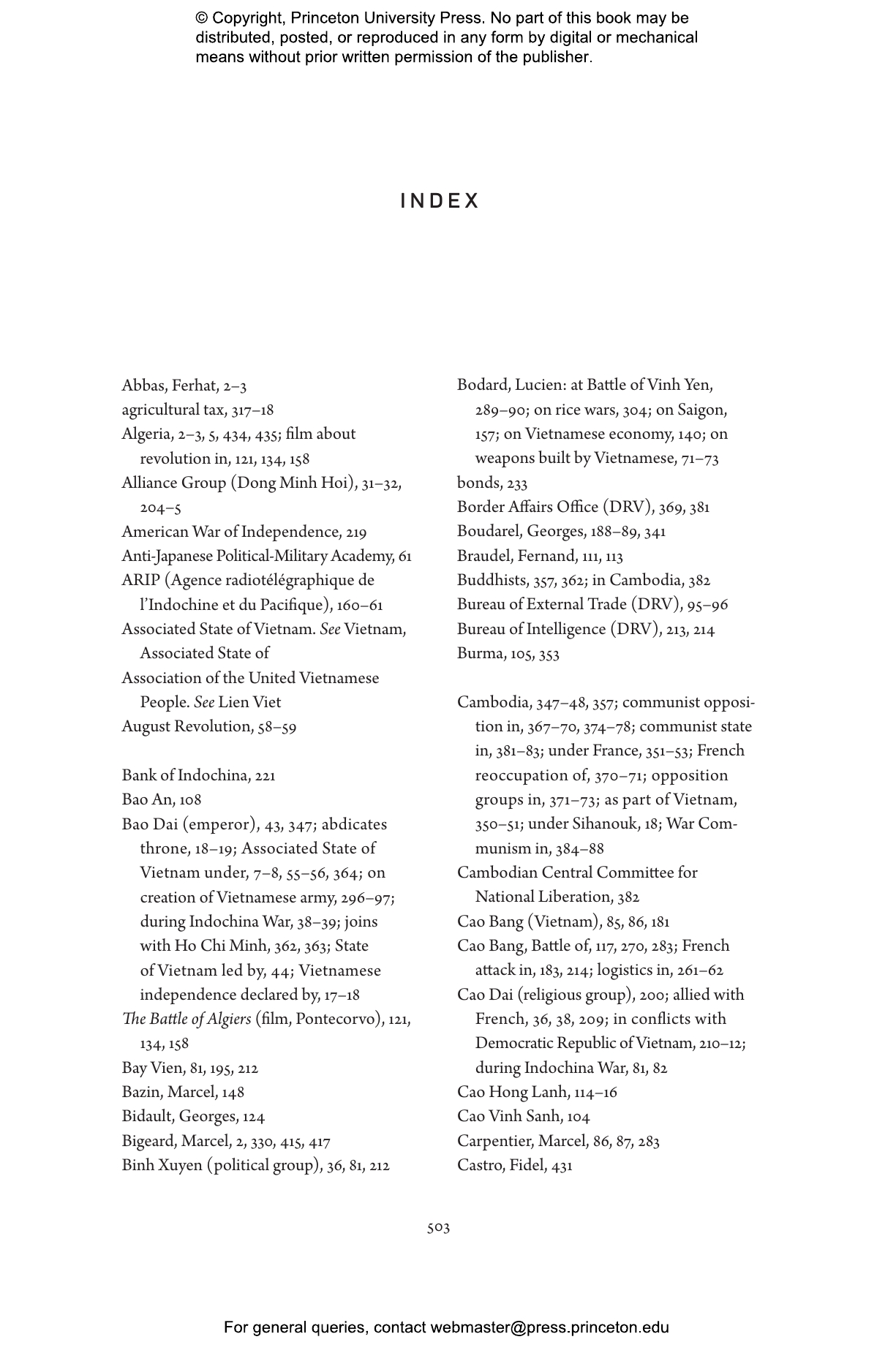 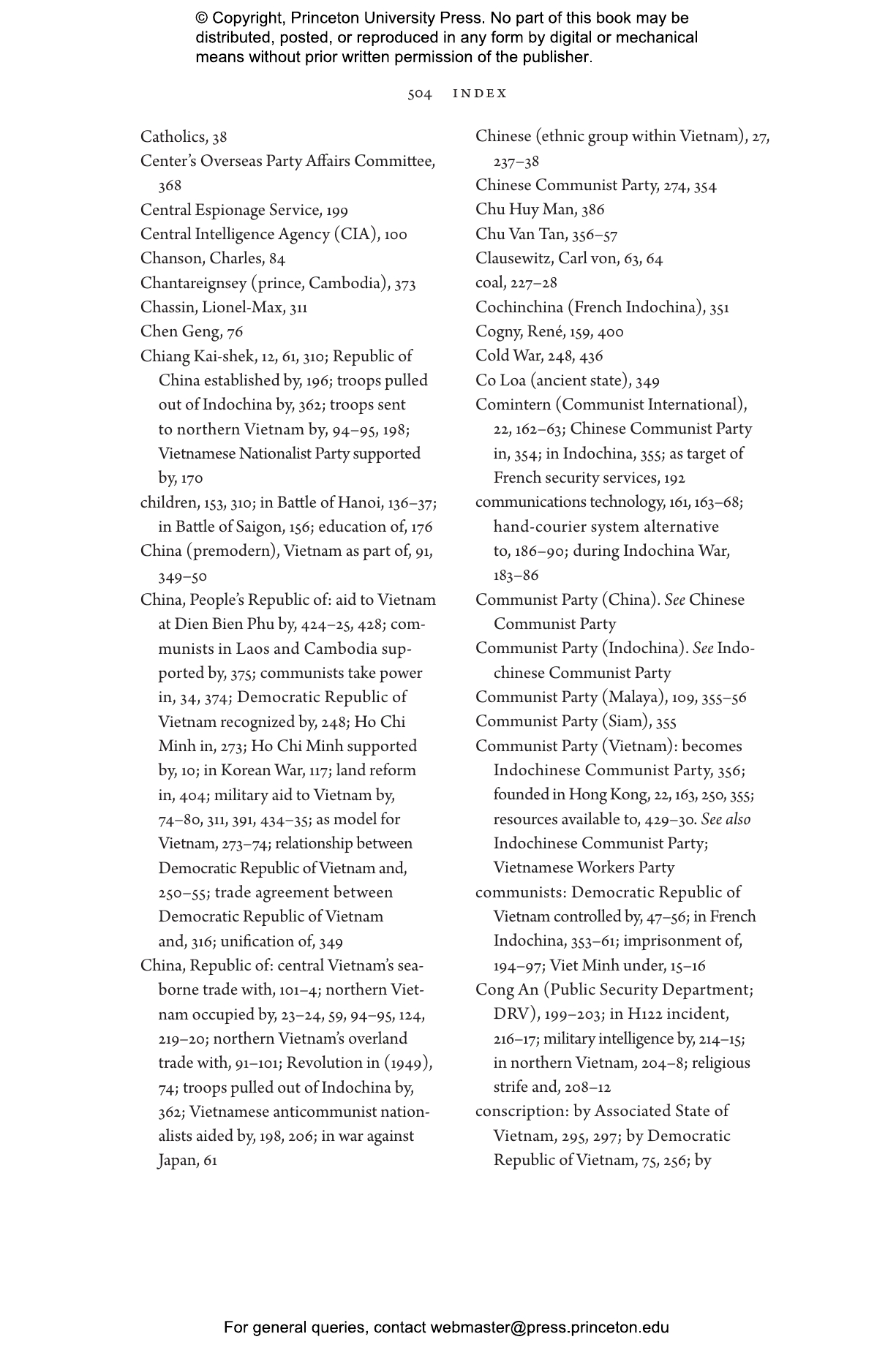 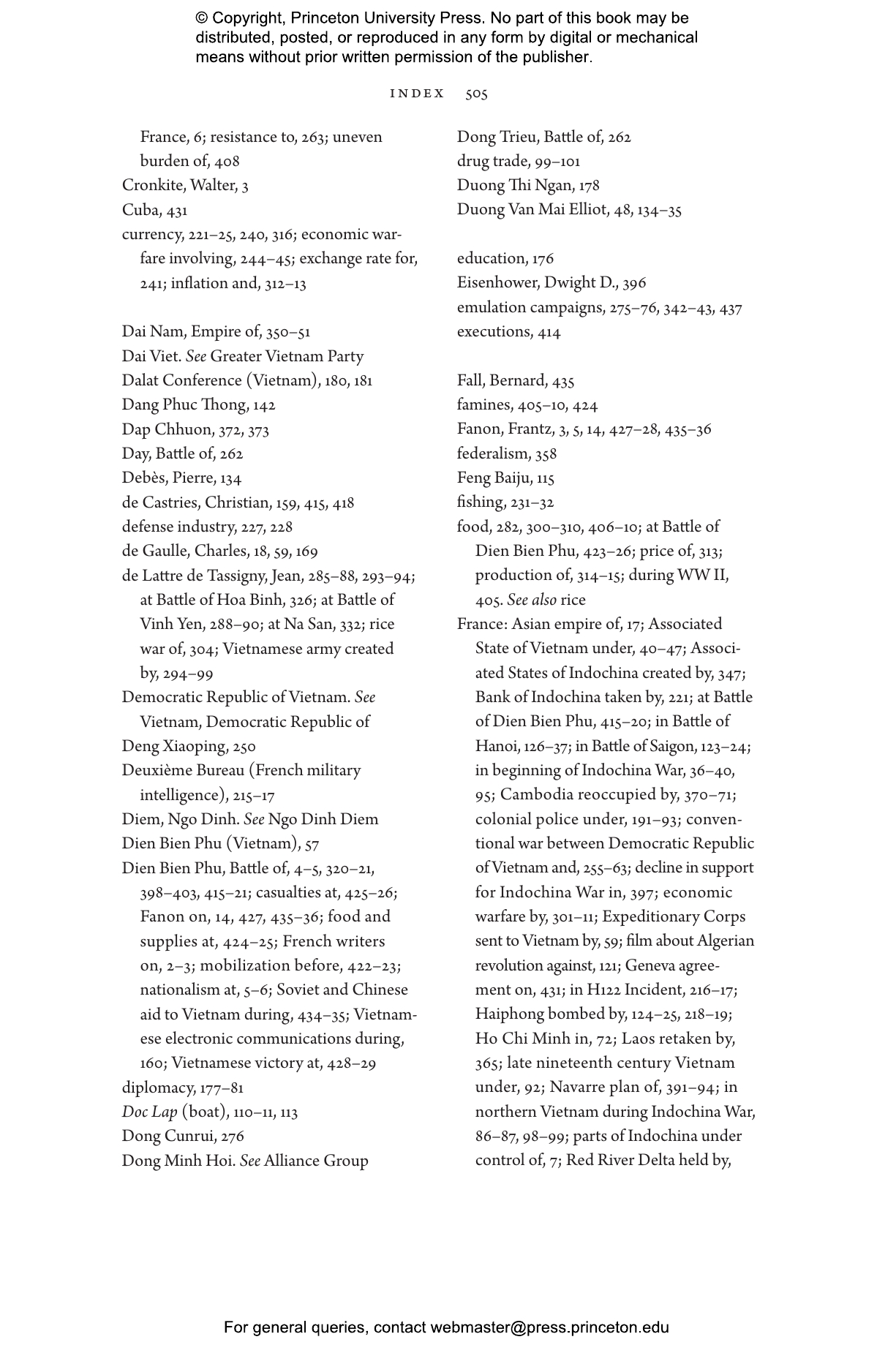 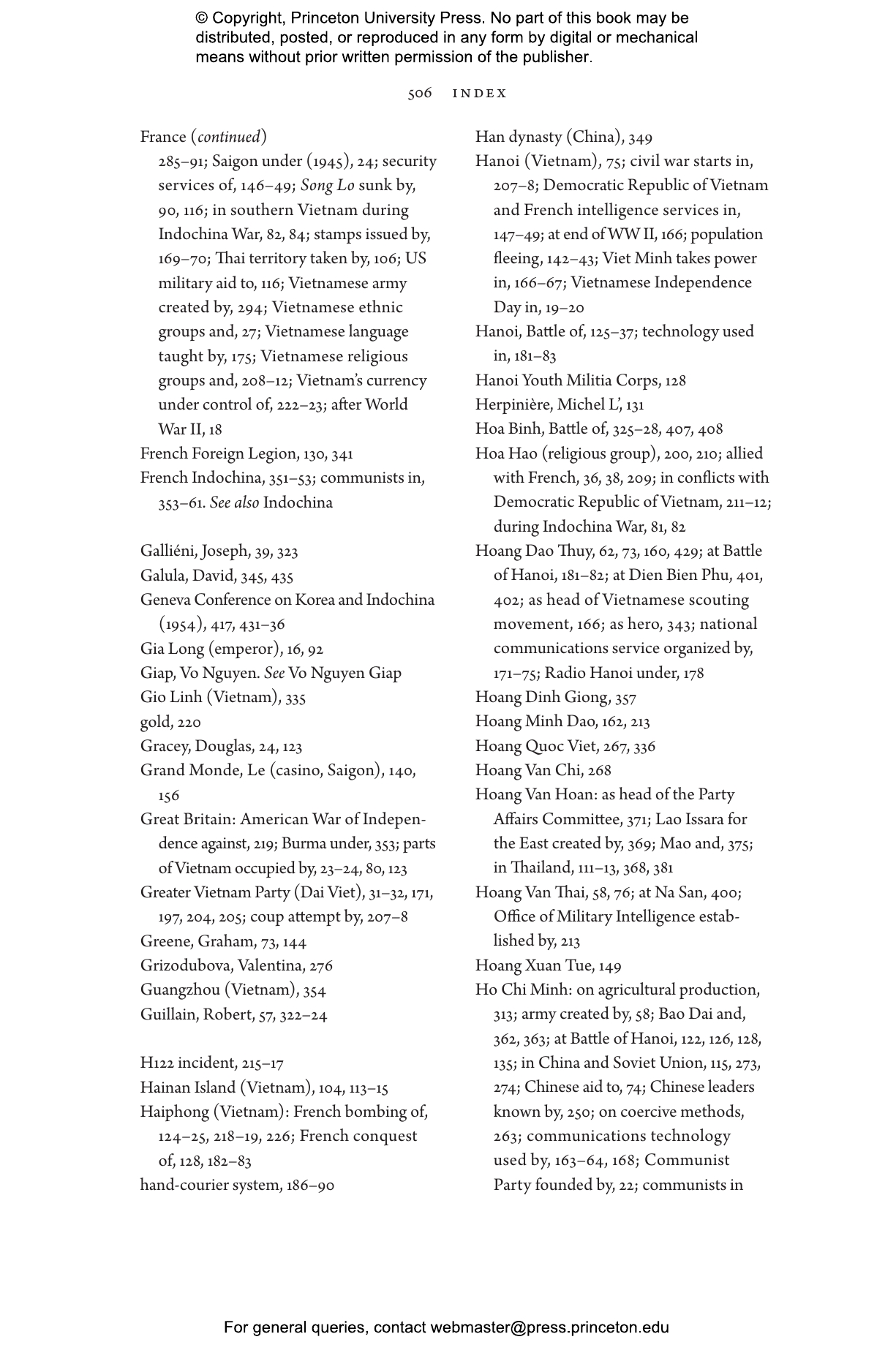 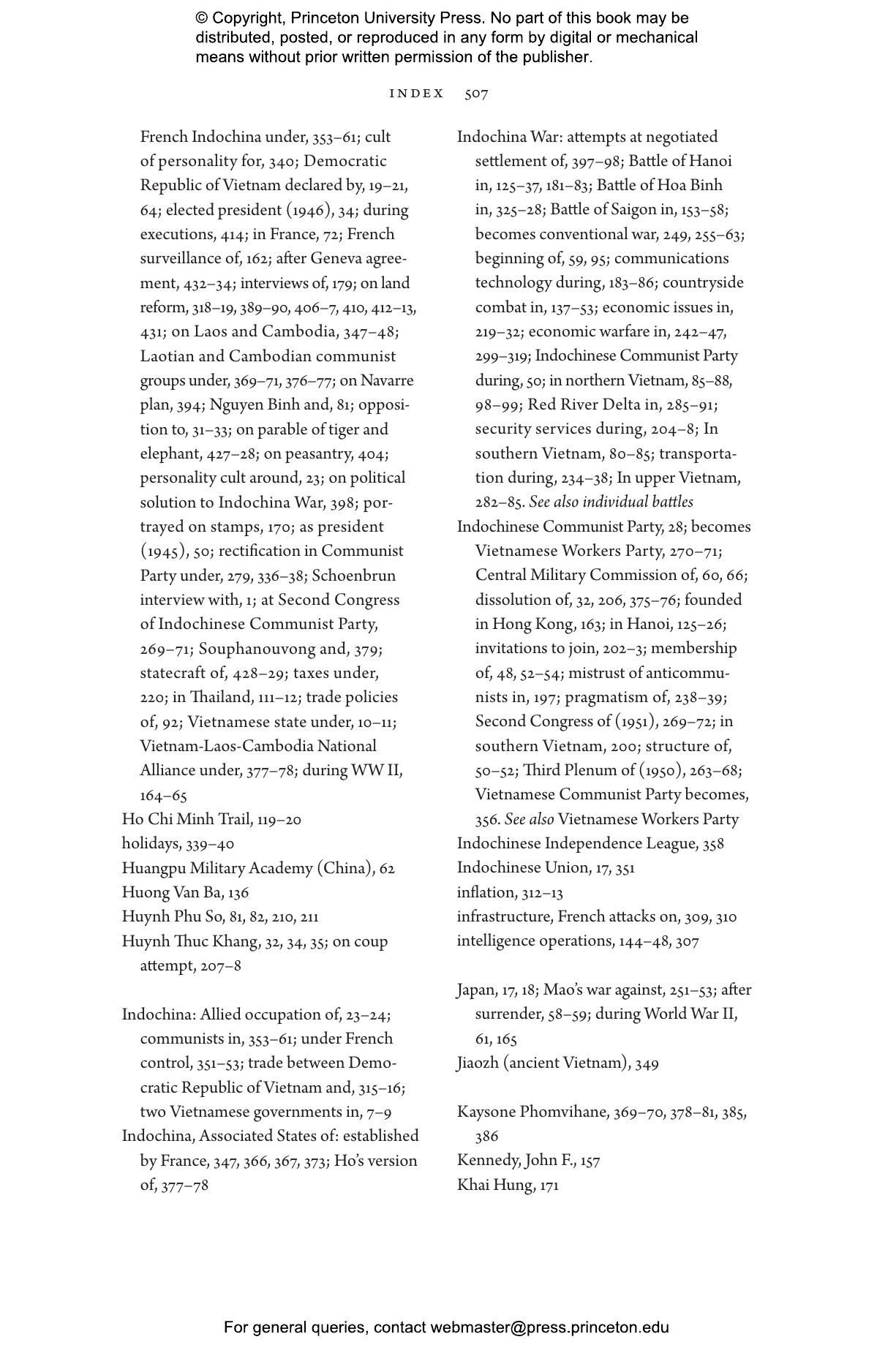 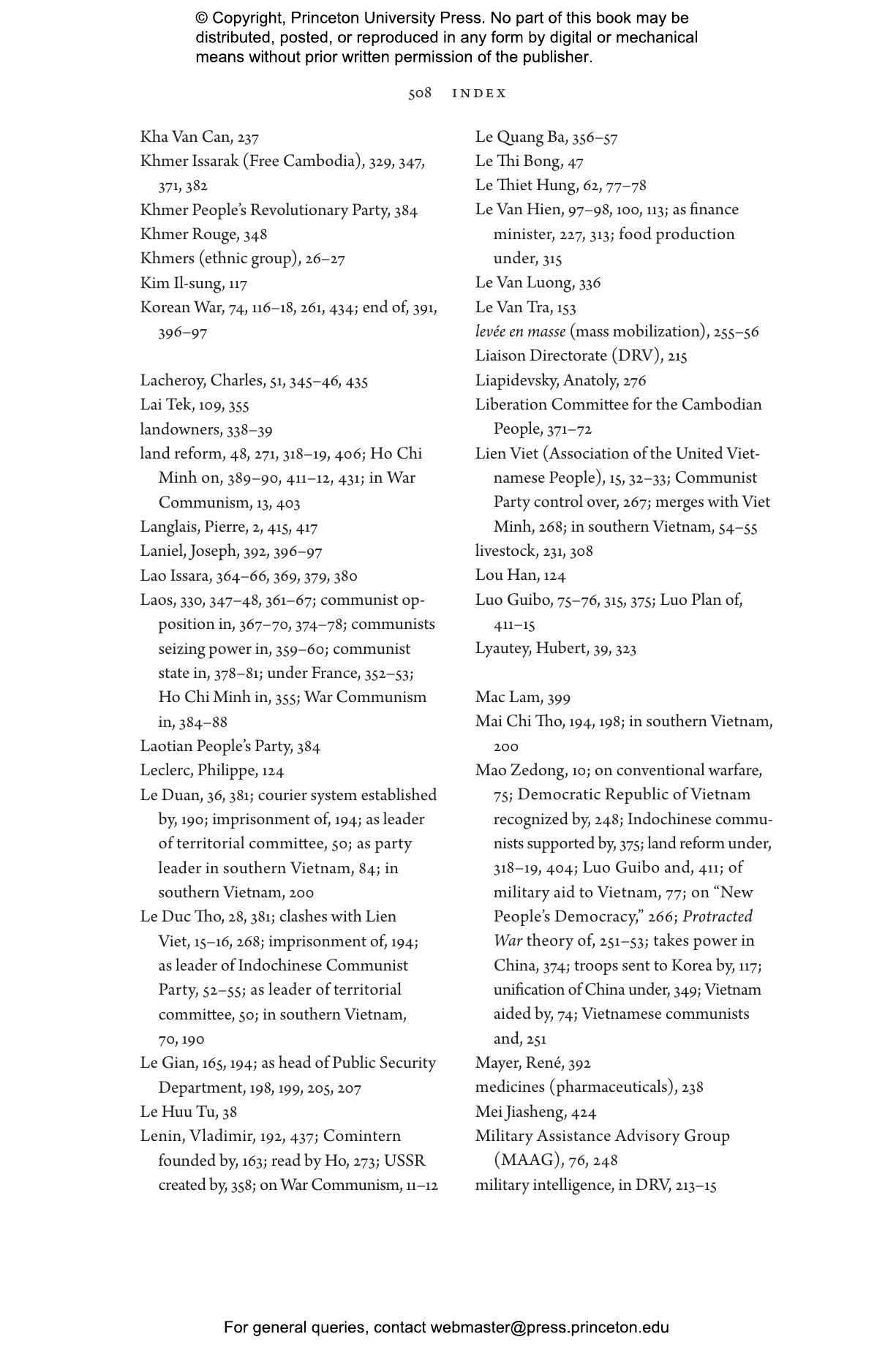 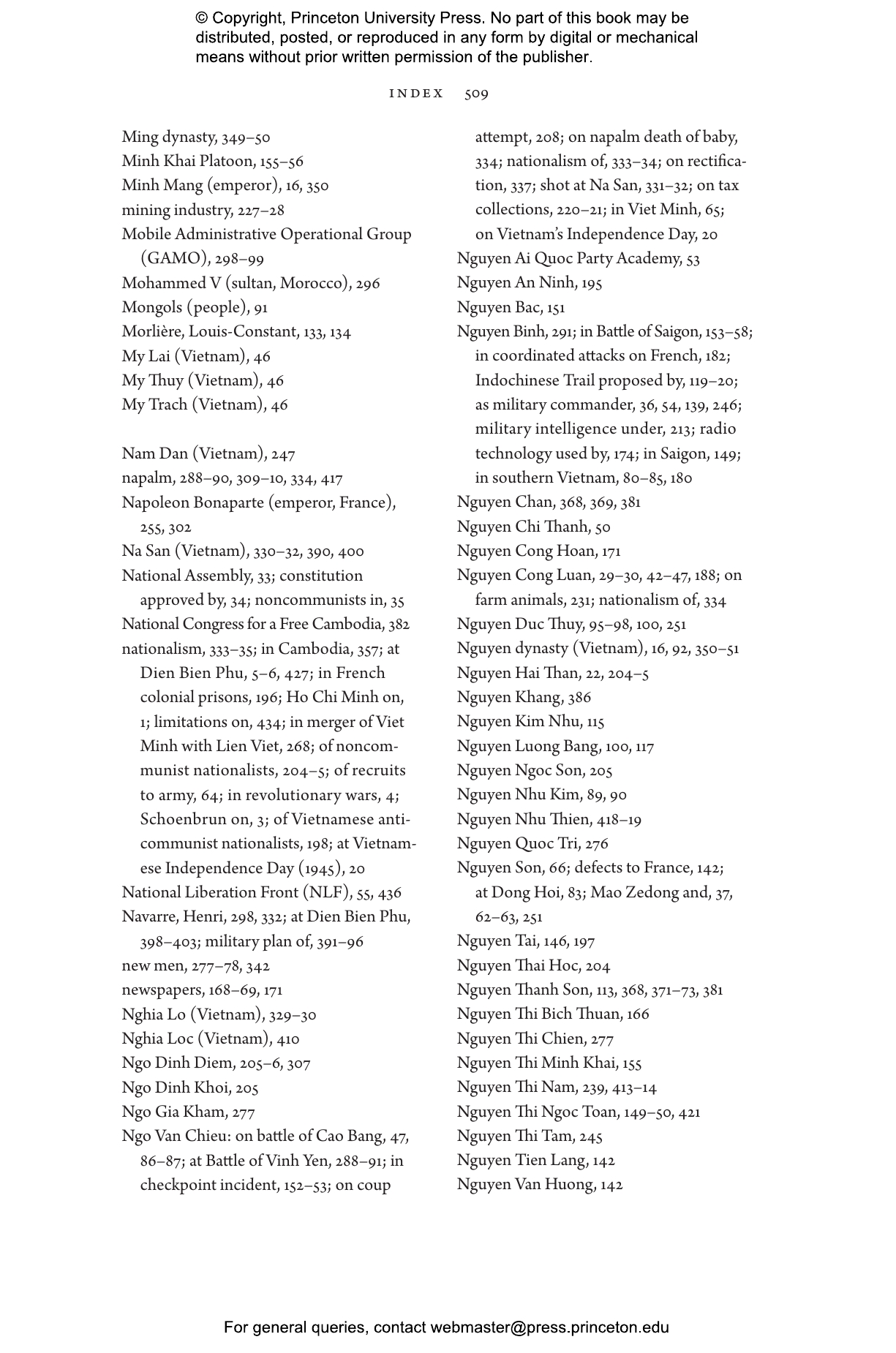 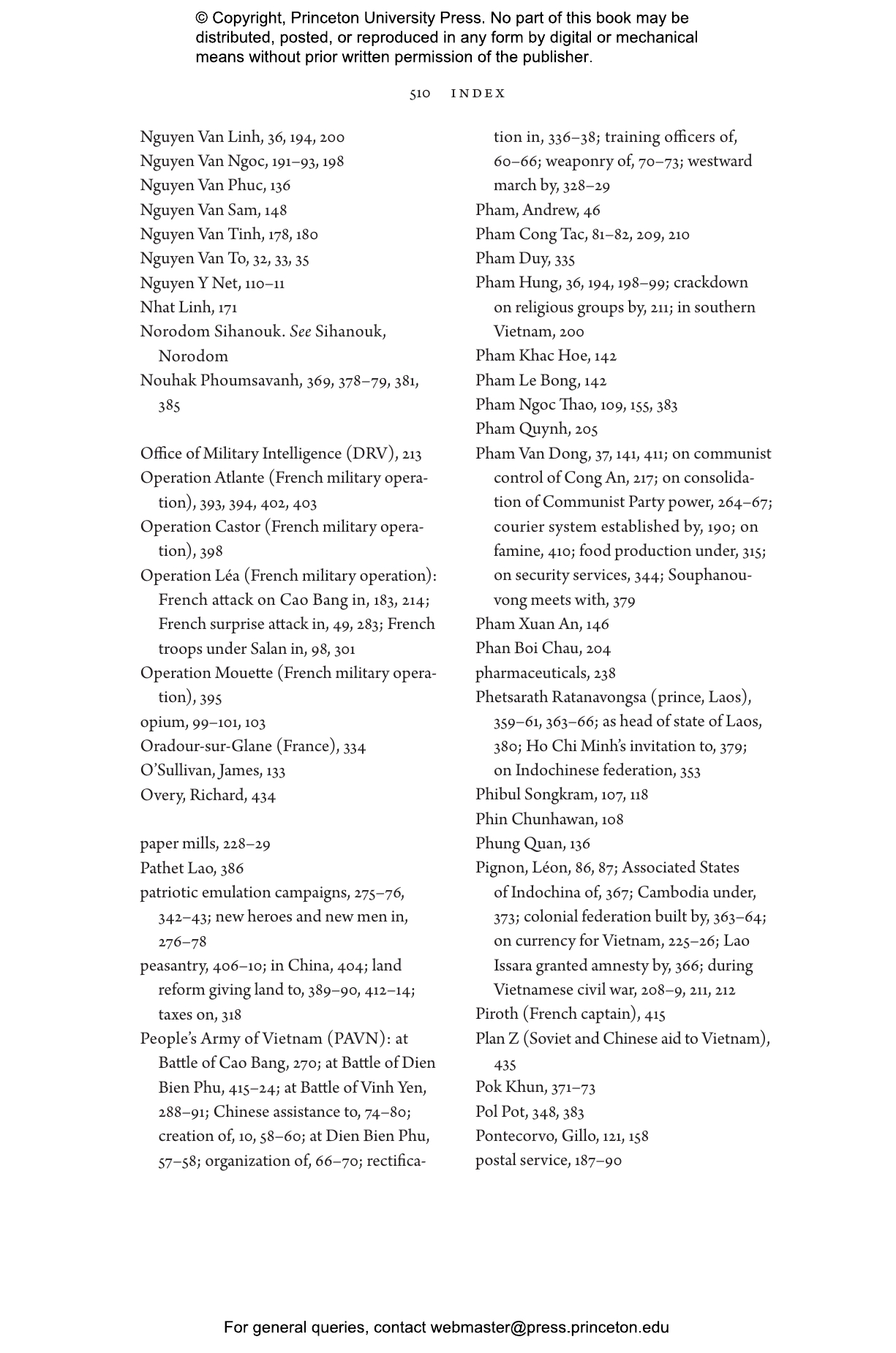 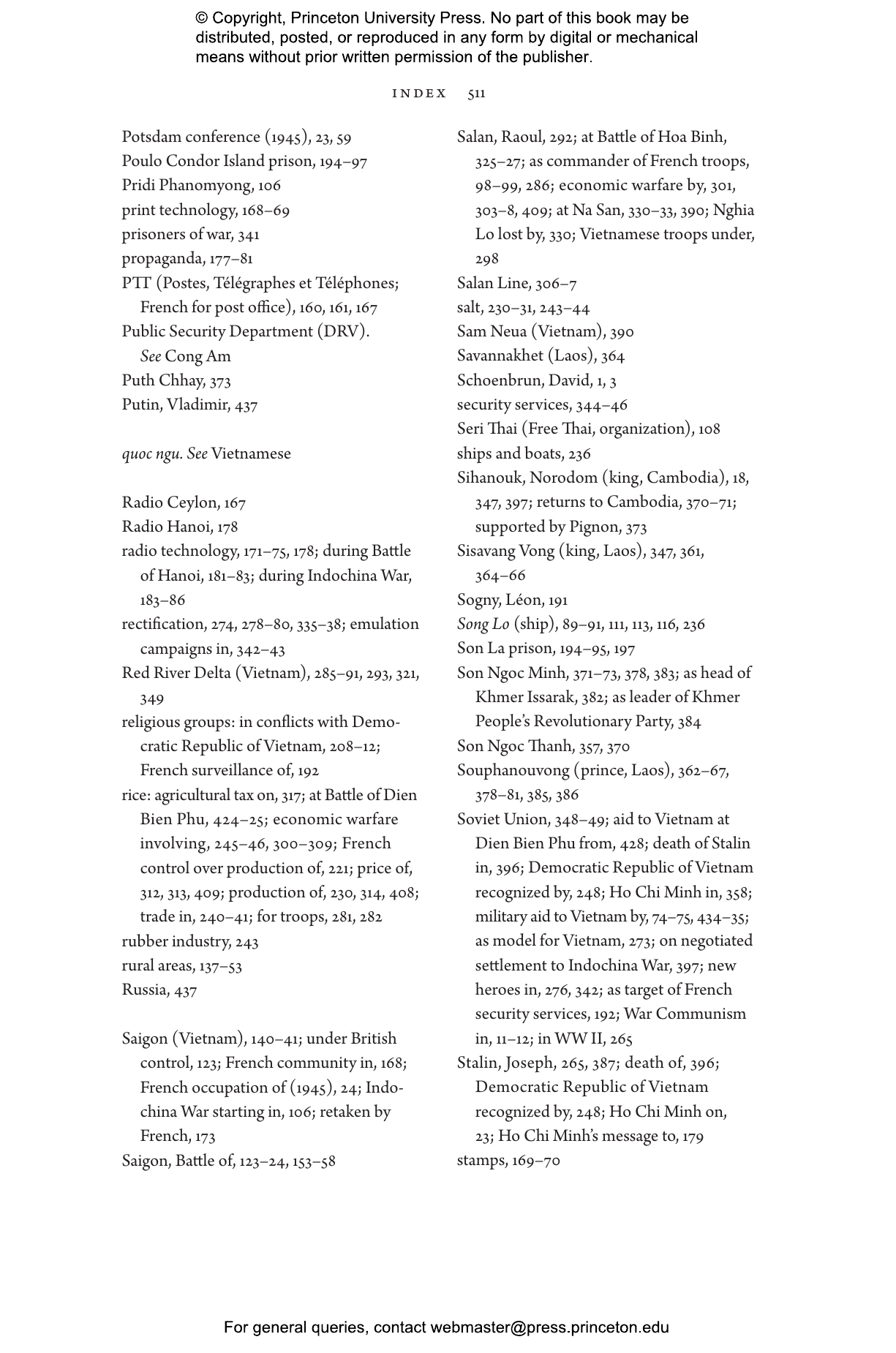 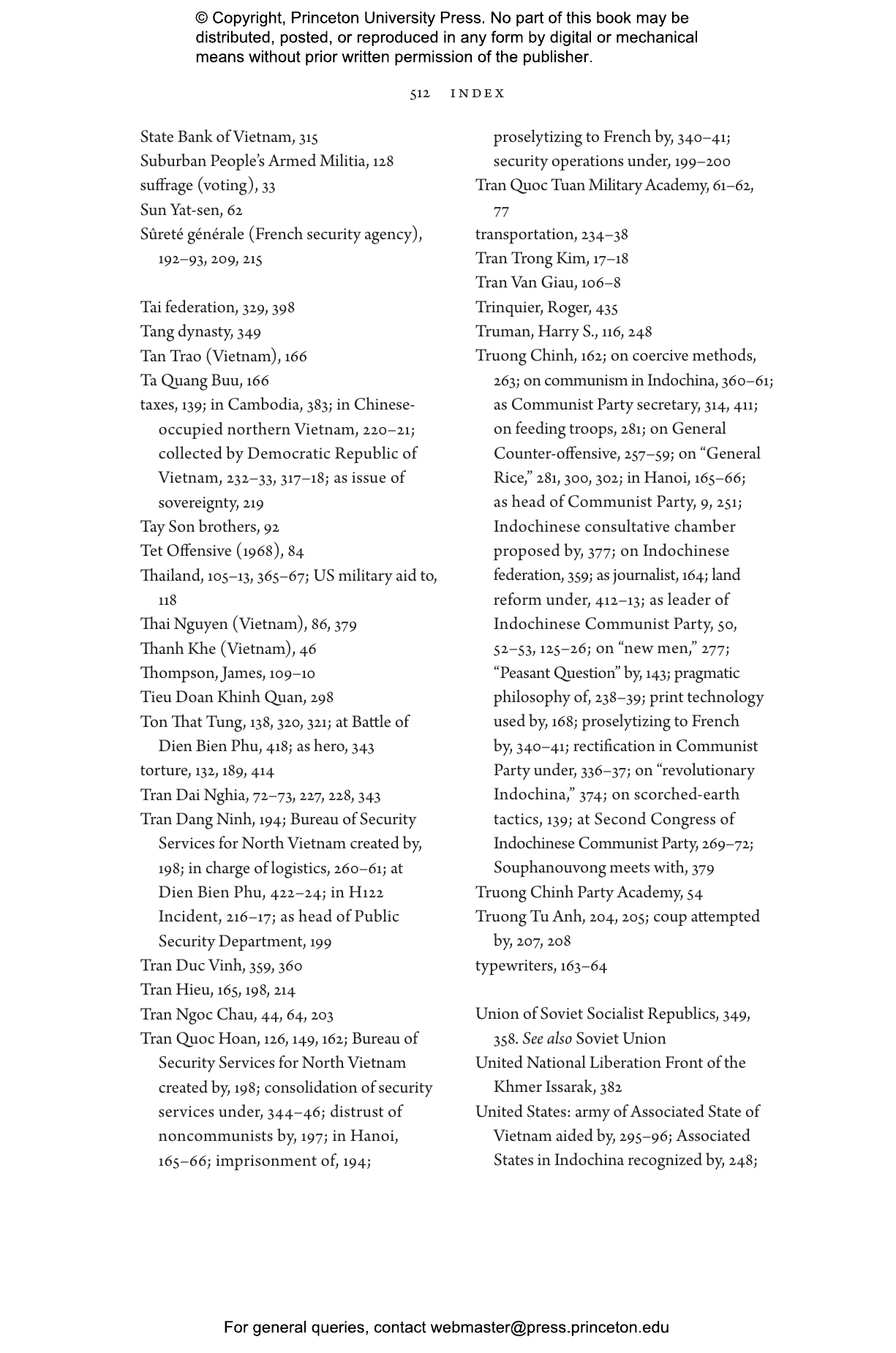 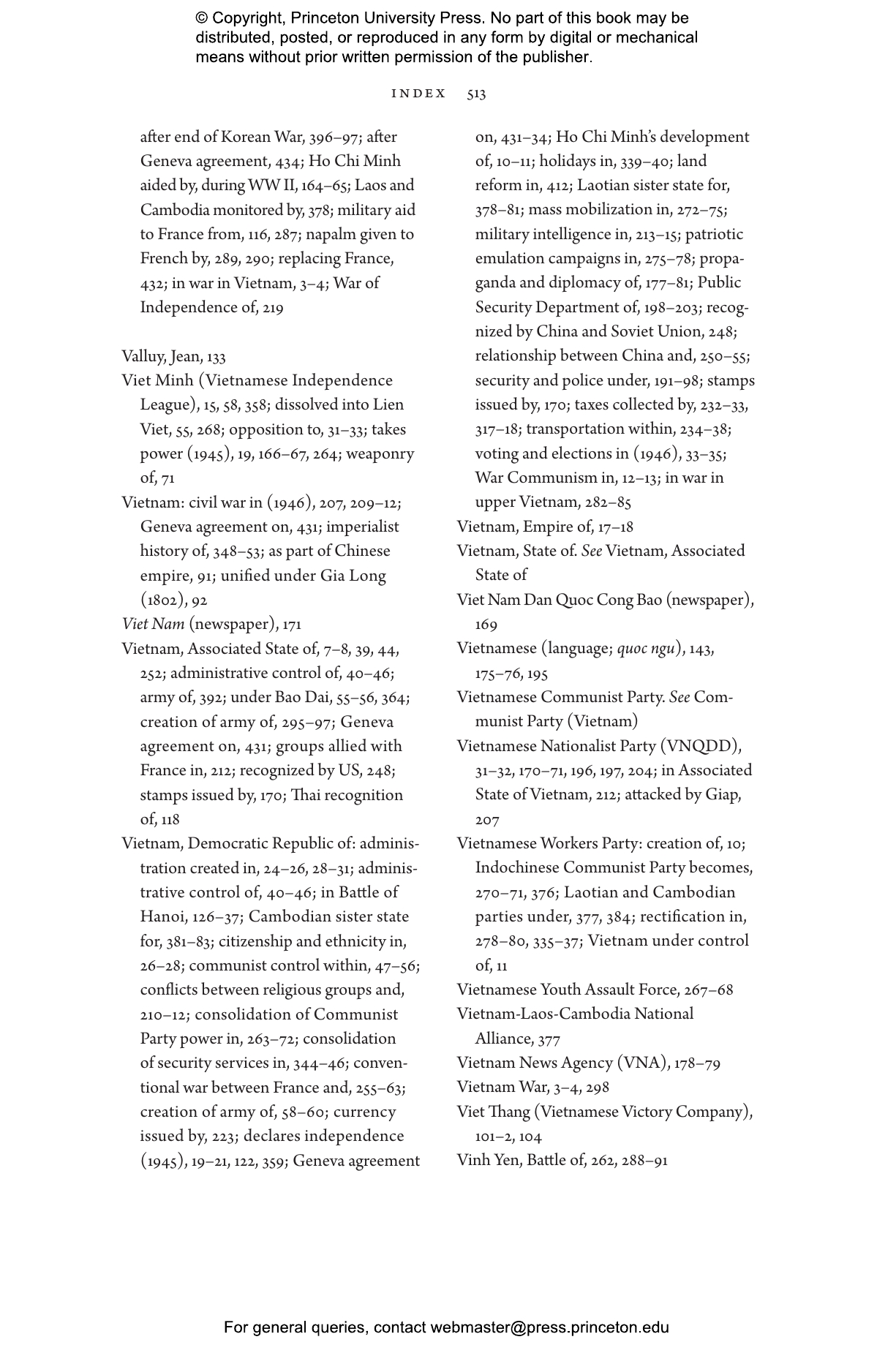 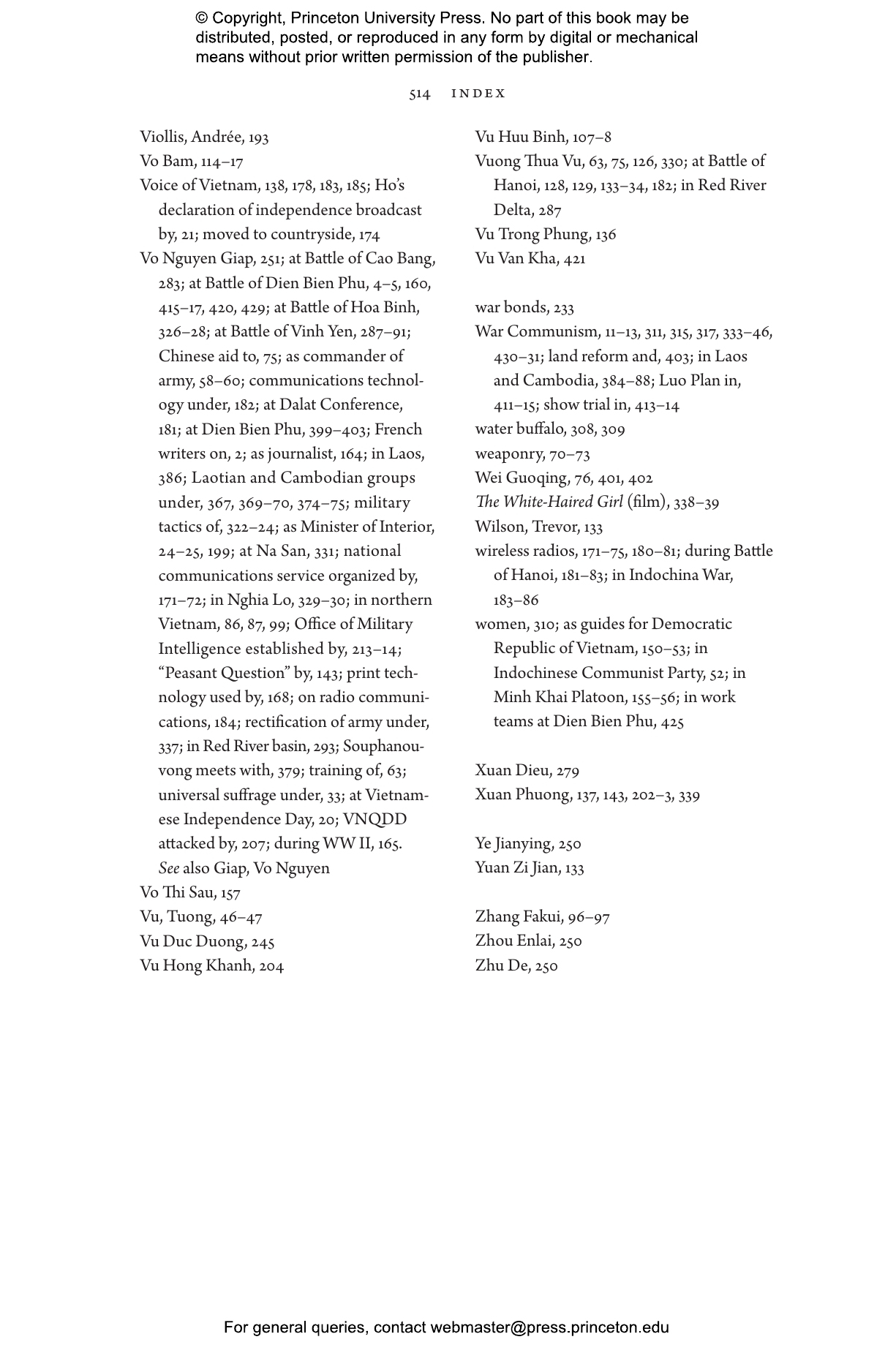 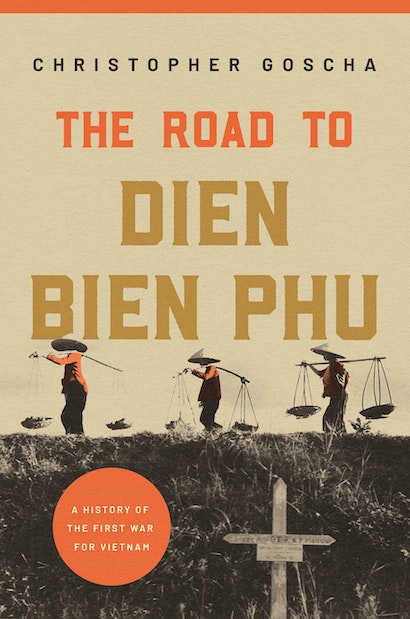 On May 7, 1954, when the bullets stopped and the air stilled in Dien Bien Phu, there was no doubt that Vietnam could fight a mighty colonial power and win. After nearly a decade of struggle, a nation forged in the crucible of war had achieved a victory undreamed of by any other national liberation movement. The Road to Dien Bien Phu tells the story of how Ho Chi Minh turned a ragtag guerrilla army into a modern fighting force capable of bringing down the formidable French army.

Taking readers from the outbreak of fighting in 1945 to the epic battle at Dien Bien Phu, Christopher Goscha shows how Ho transformed Vietnam from a decentralized guerrilla state based in the countryside to a single-party communist state shaped by a specific form of “War Communism.” Goscha discusses how the Vietnamese operated both states through economics, trade, policing, information gathering, and communications technology. He challenges the wisdom of counterinsurgency methods developed by the French and still used by the Americans today, and explains why the First Indochina War was arguably the most brutal war of decolonization in the twentieth century, killing a million Vietnamese, most of them civilians.

Panoramic in scope, The Road to Dien Bien Phu transforms our understanding of this conflict and the one the United States would later enter, and sheds new light on communist warfare and statecraft in East Asia today.

Christopher Goscha is professor of international relations in the History Department at the Université du Québec à Montréal and a leading expert on the Cold War in Asia and the wars in Vietnam. His books include Vietnam: A New History. He lives in Montréal.

"A thought-provoking reexamination of the recipe for Vietnam’s back-to-back victories against Western powers."—Publishers Weekly

"[A] zestfully granular history of the Vietminh war against the French."—Andrew J. Nathan, Foreign Affairs

"In this important book, Christopher Goscha . . . offers new insight into a post-colonial struggle that emerged from the Second World War. . . . Goscha’s command of French, English, and Vietnamese sources is a great strength in drawing out this neglected history."—Tim Cook, Literary Review of Canada

"In The Road to Dien Bien Phu, Goscha tries to answer the question posed by Frantz Fanon, the Martiniquais psychiatrist who supported anti-colonial revolutions in Algeria and other parts of the world. ‘What must we do to realize a Dien Bien Phu? How do we go about doing it?’ Goscha details the recipe in a book of more than 500 pages—a recipe not duplicated in North Africa or any anti-colonial struggle outside Asia. . . . Like any great work of history, Christopher Goscha’s book resonates with connections to the present."—Thomas A. Bass, Mekong Review

"Eye-opening. . . . It is the best work in English, French, or Vietnamese on the First Indochina War as a whole."—Shawn F. McHale, American Historical Review

"The greatest merit of Christopher Goscha’s splendid history of the First Indochina War . . . is his unsparing devotion to letting facts inform his assessments and conclusions."—Francis P. Sempa, Asian Review of Books

"The Road to Dien Bien Phu showcases the ingenuity and resourcefulness of ideologically driven authorities obstinately struggling to overcome technological, economic and other deficits with a view to satisfying aspirations that were, in the final analysis, as narrow as they were unshakable."—Pierre Asselin, History Today ​​​​​​​

“One of our foremost historians of modern Vietnam turns his attention to the First Indochina War. The result is a magnificent work: authoritative and lucid, attentive to all sides in the struggle, and above all deeply compelling.”—Fredrik Logevall, Pulitzer Prize–winning author of Embers of War

“The Road to Dien Bien Phu offers a compelling analysis of the intimate relationship between Ho Chi Minh’s communist state and the war it fought against France. With lucid prose and a rich trove of fresh sources, Goscha challenges popular myths about the exceptional power of Vietnamese nationalism and shows how victory came at a high price for the Vietnamese people. A must-read.”—Tuong Vu, author of Vietnam’s Communist Revolution

“A wonderful account by a first-rate historian of how modern Vietnam was created by communism and war. Goscha shows how important it is to understand Vietnamese history beyond the simple dichotomies fabricated by the US intervention.”—Odd Arne Westad, author of The Cold War: A World History

“In this magnificent book, Christopher Goscha draws on exhaustive research to offer a supple and entirely original conception of Vietnamese communism and the archipelago state, fundamentally recasting our understanding of revolutionary war, nationalism, and the processes of decolonization in the second half of the twentieth century.”—Mark Philip Bradley, author of Vietnam at War

“This deeply researched and brilliantly argued book will change how historians and other readers think about the First Indochina War. Overturning old narratives about Vietnam as a ‘nation in arms,’ Goscha shows that the road to Dien Bien Phu was a complex and brutal struggle over sovereignty, space, food, trade, and people.”—Edward Miller, author of Misalliance: Ngo Dinh Diem, the United States, and the Fate of South Vietnam