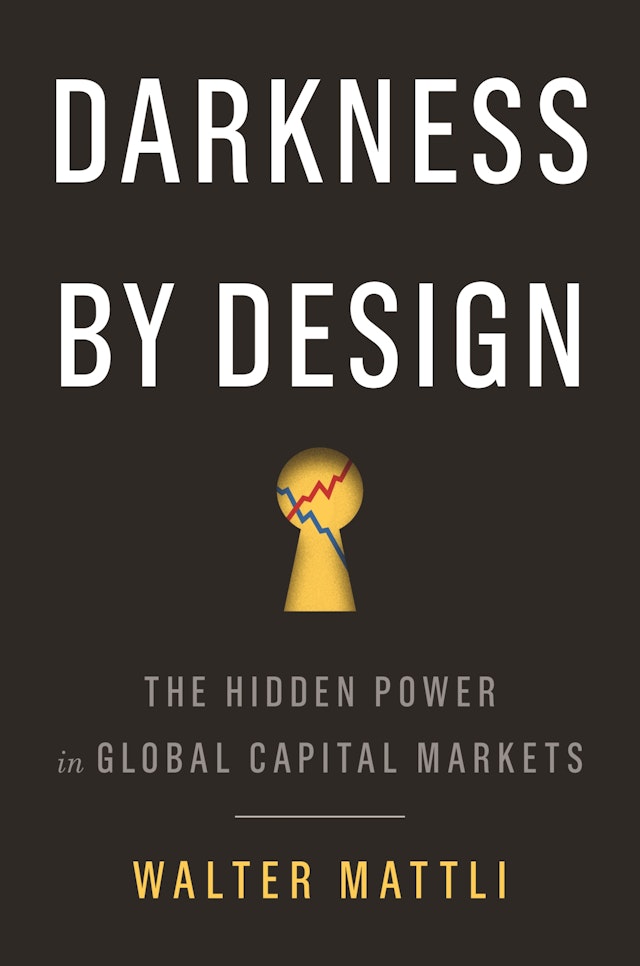 Capital markets have undergone a dramatic transformation in the past two decades. Algorithmic high-speed supercomputing has replaced traditional floor trading and human market makers, while centralized exchanges that once ensured fairness and transparency have fragmented into a dizzying array of competing exchanges and trading platforms. Darkness by Design exposes the unseen perils of market fragmentation and “dark” markets, some of which are deliberately designed to enable the transfer of wealth from the weak to the powerful.

Walter Mattli traces the fall of the traditional exchange model of the NYSE, the world’s leading stock market in the twentieth century, showing how it has come to be supplanted by fragmented markets whose governance is frequently set up to allow unscrupulous operators to exploit conflicts of interest at the expense of an unsuspecting public. Market makers have few obligations, market surveillance is neglected or impossible, enforcement is ineffective, and new technologies are not necessarily used to improve oversight but to offer lucrative preferential market access to select clients in ways that are often hidden. Mattli argues that power politics is central in today’s fragmented markets. He sheds critical light on how the redistribution of power and influence has created new winners and losers in capital markets and lays the groundwork for sensible reforms to combat shady trading schemes and reclaim these markets for the long-term benefit of everyone.

Essential reading for anyone with money in the stock market, Darkness by Design challenges the conventional view of markets and reveals the troubling implications of unchecked market power for the health of the global economy and society as a whole.

Walter Mattli is professor of international political economy and a fellow of St. John’s College, University of Oxford. His books include The New Global Rulers: The Privatization of Regulation in the World Economy and The Politics of Global Regulation (both Princeton). He lives in Oxford, England.

"There are few books on the structure and governance of equity markets, and even fewer that can be enjoyed by new and experienced readers . . . Mattli’s sets a high standard."—David Murphy, Open Letters Review

"Mr Mattli’s book is a delightful chronicle of the changes in the way trading-related information has flowed"—Namit Gupta, Business Standard

"What Mattli shows in his study of the New York Stock Exchange is that, prior to 1970, it is quite possible to believe that capitalists did behave with a degree of honour and regard for the public good in the way they conducted business."—Don Flynn, Chartist

"Walter Mattli's excellent book looks at the technological revolution that led to the fragmentation of today's security exchanges and trading floors. Innovations such as algorithmic trading and dark pools present significant challenges to market participants on issues ranging from efficiency and transparency to fairness and investor protection. Mattli's brilliant analysis is an eye-opener for everyone interested in the future of these markets."—Effi Benmelech, Northwestern University

"Walter Mattli takes us into a world of lit markets and dark pools, of stuffing and spoofing, and of trading speeds that make the blink of an eye seem interminable. He reveals how modern asset markets are actually governed—and how power is accumulated, used, and abused. Readers of this book will find it difficult to think about financial markets the same way ever again."—Jeffry Frieden, Harvard University

"In this masterful book, Walter Mattli delivers a tour de force that is deeply researched, crisply written, and timely. Darkness by Design is a must-read for regulators, policymakers, and anyone interested in how securities markets work."—Yesha Yadav, Vanderbilt Law School

“This important book traces how broker-dealers began to grow, converted to public companies to increase capital, gained financial and political influence, formed new coalitions that demanded changes in governance to benefit themselves, and produced the conflict-ridden, unequal system we have today. The story Mattli tells reads almost like a Shakespearean plot.”—Kenneth W. Abbott, Arizona State University

“Provocative and engaging.”—Stephen H. Haber, coauthor of Fragile by Design: The Political Origins of Banking Crises and Scarce Credit