How our understanding of calculus has evolved over more than three centuries, how this has shaped the way it is taught in the classroom, and why calculus pedagogy needs to change 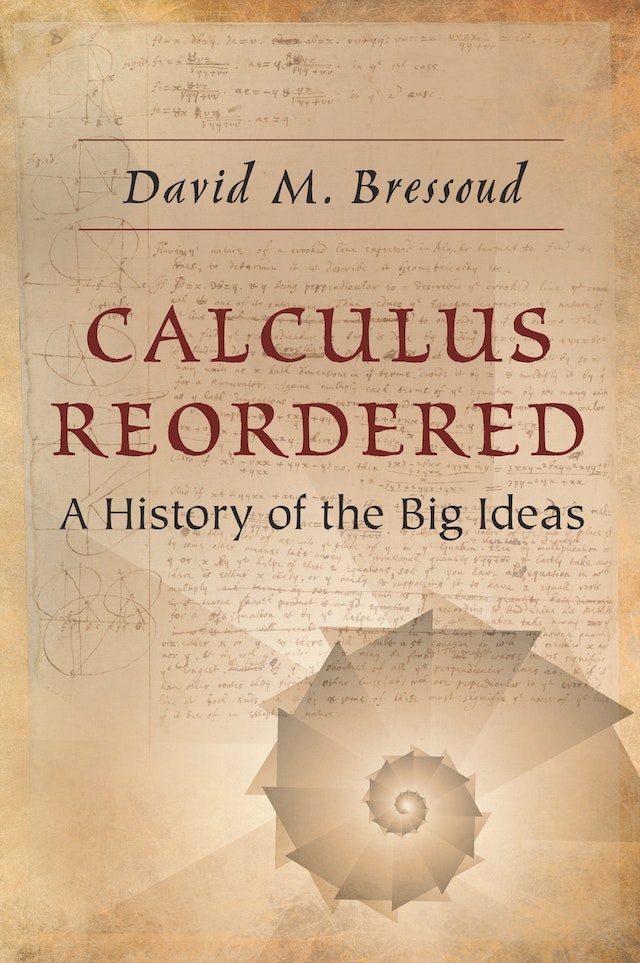 Calculus Reordered takes readers on a remarkable journey through hundreds of years to tell the story of how calculus evolved into the subject we know today. David Bressoud explains why calculus is credited to seventeenth-century figures Isaac Newton and Gottfried Leibniz, and how its current structure is based on developments that arose in the nineteenth century. Bressoud argues that a pedagogy informed by the historical development of calculus represents a sounder way for students to learn this fascinating area of mathematics.

Delving into calculus’s birth in the Hellenistic Eastern Mediterranean—particularly in Syracuse, Sicily and Alexandria, Egypt—as well as India and the Islamic Middle East, Bressoud considers how calculus developed in response to essential questions emerging from engineering and astronomy. He looks at how Newton and Leibniz built their work on a flurry of activity that occurred throughout Europe, and how Italian philosophers such as Galileo Galilei played a particularly important role. In describing calculus’s evolution, Bressoud reveals problems with the standard ordering of its curriculum: limits, differentiation, integration, and series. He contends that the historical order—integration as accumulation, then differentiation as ratios of change, series as sequences of partial sums, and finally limits as they arise from the algebra of inequalities—makes more sense in the classroom environment.

Exploring the motivations behind calculus’s discovery, Calculus Reordered highlights how this essential tool of mathematics came to be.

David M. Bressoud is DeWitt Wallace Professor of Mathematics at Macalester College and Director of the Conference Board of the Mathematical Sciences. His many books include Second Year Calculus and A Radical Approach to Lebesgue’s Theory of Integration. He lives in St. Paul, Minnesota.

"In an orderly sense, the writer introduces the context and then proceeds to state exactly what was the major draw back in the context during the relevant period of time. . . The progression, as well as the way in which he uses simple techniques to demolish towers of problems in the same sense as it was done back in the day is certainly worth appreciation."—Mathemafrica

"Any lover of mathematics will appreciate the time spent among these pages."—A. Misseldine, Choice

“I wish David Bressoud’s beautifully and accessibly written book had been available to me back when I was a mathematics student. By tracing the trail of ideas and advances in calculus over many centuries, his account brings to life a story not of a small number of isolated geniuses, as is usually told, but rather a wonderful march forward, pursued by a great many individuals on multiple continents. Our regard for the ‘greats’ isn’t diminished when we see how the development of calculus is, in fact, a collective creation of all humanity, reflecting the awesome power we have when we share and pass on ideas for others to build on.”—Keith Devlin, author of The Man of Numbers and Finding Fibonacci

“All Gaul, as Julius Caesar famously observed, is divided into three parts. All calculus, as David Bressoud argues here, is divided into four: accumulation, ratios of change, series, and limits. With its mix of mathematics and history, this splendid book provides a survey of one of humanity’s great intellectual achievements.”—William Dunham, author of The Calculus Gallery: Masterpieces from Newton to Lebesgue

“As far as I know, there is no other book that integrates the history, theory, and pedagogy of calculus as well as this one. David Bressoud has long experience in these aspects of calculus and provides a masterly and lucid treatment of the subject.”—John Stillwell, University of San Francisco

“This book presents a historical outline of the development of calculus through its four major ideas: accumulation, proportions of change, series, and tolerance. It shows teachers of the subject how they could adapt their curriculum to the historical order to make it more understandable to students. It will also be very useful for all those who want to learn about the origins and evolution of calculus.”—Victor J. Katz, University of the District of Columbia