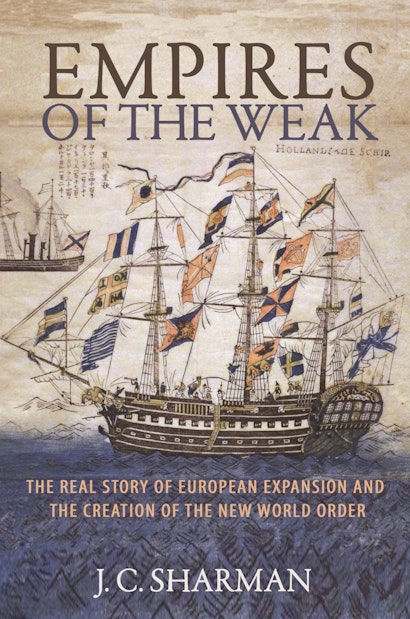 What accounts for the rise of the state, the creation of the first global system, and the dominance of the West? The conventional answer asserts that superior technology, tactics, and institutions forged by Darwinian military competition gave Europeans a decisive advantage in war over other civilizations from 1500 onward. In contrast, Empires of the Weak argues that Europeans actually had no general military superiority in the early modern era. J. C. Sharman shows instead that European expansion from the fifteenth to eighteenth centuries is better explained by deference to strong Asian and African polities, disease in the Americas, and maritime supremacy earned by default because local land-oriented polities were largely indifferent to war and trade at sea. Empires of the Weak demonstrates that the rise of the West was an exception in the prevailing world order.

J. C. Sharman is the Sir Patrick Sheehy Professor of International Relations at the University of Cambridge, where he is a fellow of King's College. His books include The Despot’s Guide to Wealth Management, International Order in Diversity, and Outsourcing Empire.

"As a critique of prevailing modes of thinking about global politics, Empires of the Weak succeeds admirably."—Alan Mikhail, New York Times Book Review

"Without assuming prior knowledge. . . . Empires of the Weak demonstrates the problems with the theoretical assumptions of the military revolution thesis."—Sarah Kinkel, Times Higher Education

"An excellent, important, and much-overdue book that will change your thinking about the early modern world."—Sven Beckert, author of Empire of Cotton: A Global History

"A tour de force that delights by a creativity evident on every page."—Peter J. Katzenstein, Cornell University