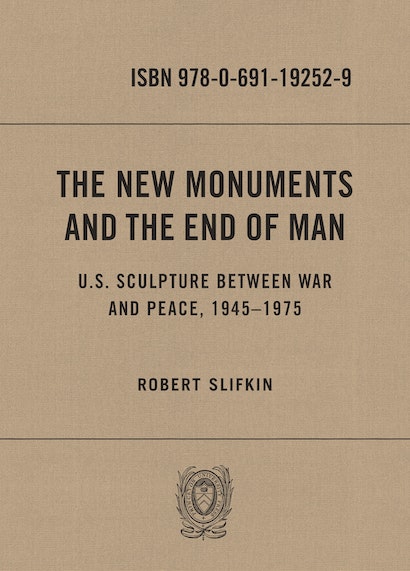 In the wake of the atomic bombings of Japan in 1945, artists in the United States began to question what it meant to create a work of art in a world where humanity could be rendered extinct by its own hand. The New Monuments and the End of Man examines how some of the most important artists of postwar America revived the neglected tradition of the sculptural monument as a way to grapple with the cultural and existential anxieties surrounding the threat of nuclear annihilation.

Robert Slifkin looks at such iconic works as the industrially evocative welded steel sculptures of David Smith, the austere structures of Donald Judd, and the desolate yet picturesque earthworks of Robert Smithson. Transforming how we understand this crucial moment in American art, he traces the intersections of postwar sculptural practice with cybernetic theory, science-fiction cinema and literature, and the political debates surrounding nuclear warfare. Slifkin identifies previously unrecognized affinities of the sculpture of the 1940s and 1950s with the minimalism and land art of the 1960s and 1970s, and acknowledges the important contributions of postwar artists who have been marginalized until now, such as Raoul Hague, Peter Grippe, and Robert Mallary.

Strikingly illustrated throughout, The New Monuments and the End of Man spans the decades from Hiroshima to the Fall of Saigon, when the atomic bomb cast its shadow over American art.

Robert Slifkin is associate professor of fine arts at New York University's Institute of Fine Arts. He is the author of Out of Time: Philip Guston and the Refiguration of Postwar American Art. He lives in New York City.

"In an ambitious and compelling interpretation of sculpture between the end of WW II and the end of the Vietnam War, Slifkin (Institute of Fine Arts, NYU) examines the expansion of sculptural aesthetic properties, giving renewed attention to the property of monumentalism. Illuminating work ranging from abstract expressionism to land art, the author looks at this work as sharing a sculptural material presence that acknowledged the 'contemporary space and time of the viewer,' and in so doing offered images of a future Utopian or catastrophic in tone."—Choice

"The New Monuments and the End of Man recovers a group of American sculptors from historical neglect and finds that many of the moves we credit to subsequent artists—such as an ambiguous use of technology, a direct engagement of the viewer, and a bold opening to the environment—belong by rights to them. This is an impressive act of art-historical anamnesis that serves as an important revision of cultural history, radially repositioning both generations of sculptors in terms of period anxieties about military-industrial disaster and nuclear annihilation."—Hal Foster, Princeton University

"After reading this book, no one will be able to understand postwar sculpture's vaunted 'activation of space' in quite the same way. In bracing prose, Slifkin restores its true cultural and political texture as an aerialized space of fear and anticipation, inevitably connected to the spatial effects of advanced weaponry."—Jennifer L. Roberts, author of Mirror-Travels: Robert Smithson and History

"Robert Slifkin has written an intellectually compelling and deeply engaged study of an important aspect of postwar American art and culture that has largely been overlooked until now."—Alex Potts, author of Experiments in Modern Realism: World Making, Politics, and the Everyday in Postwar European and American Art