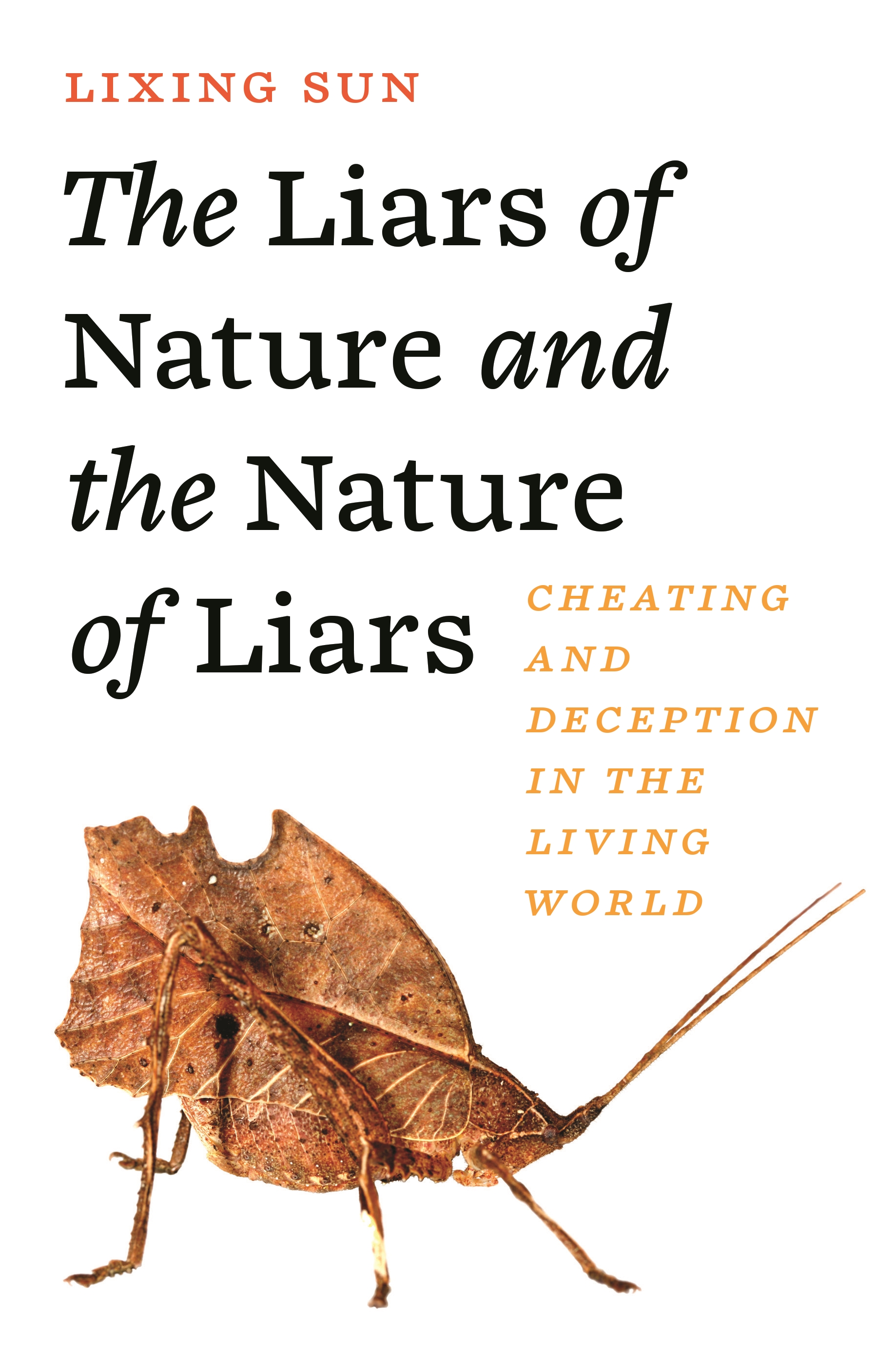 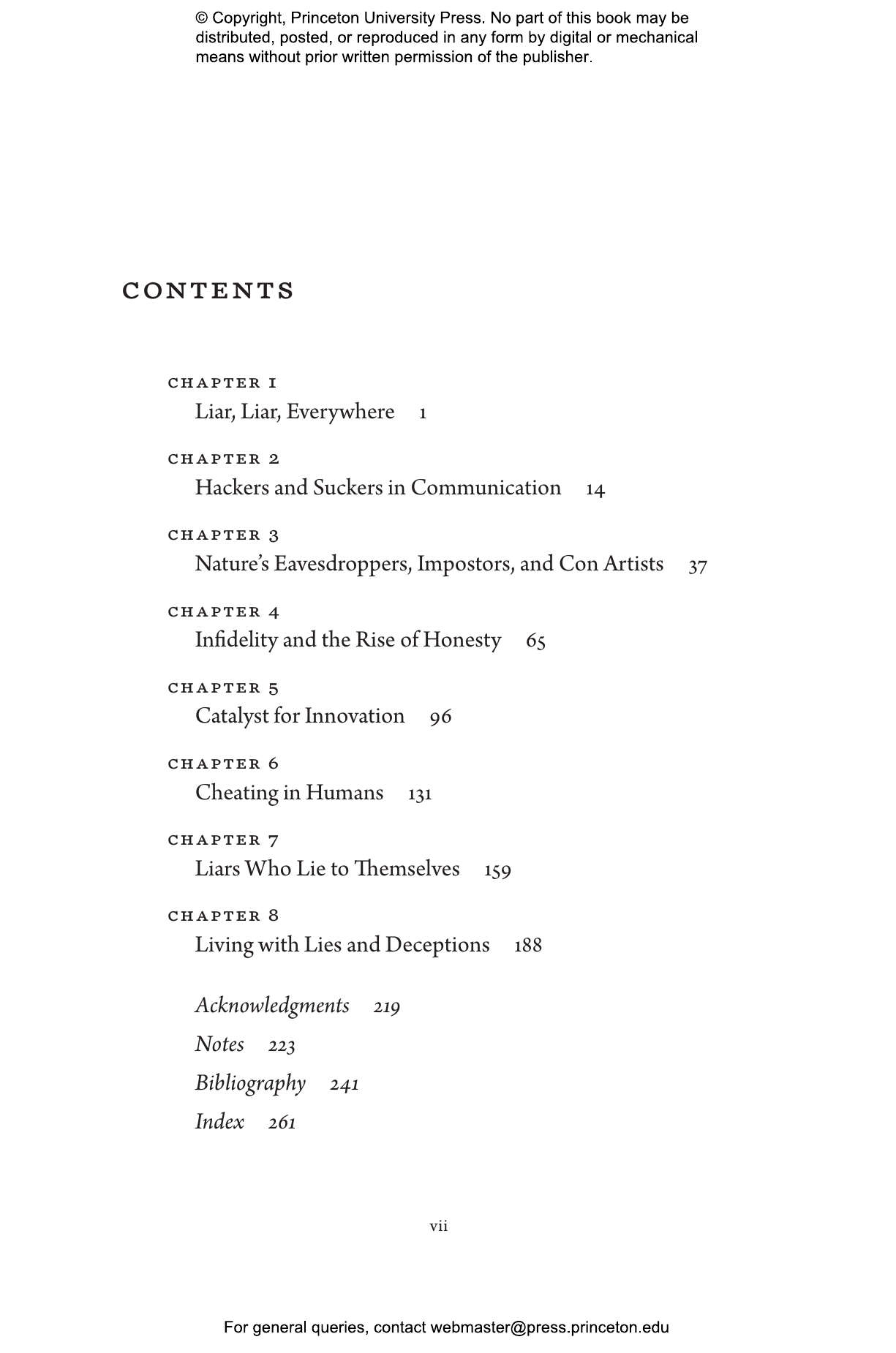 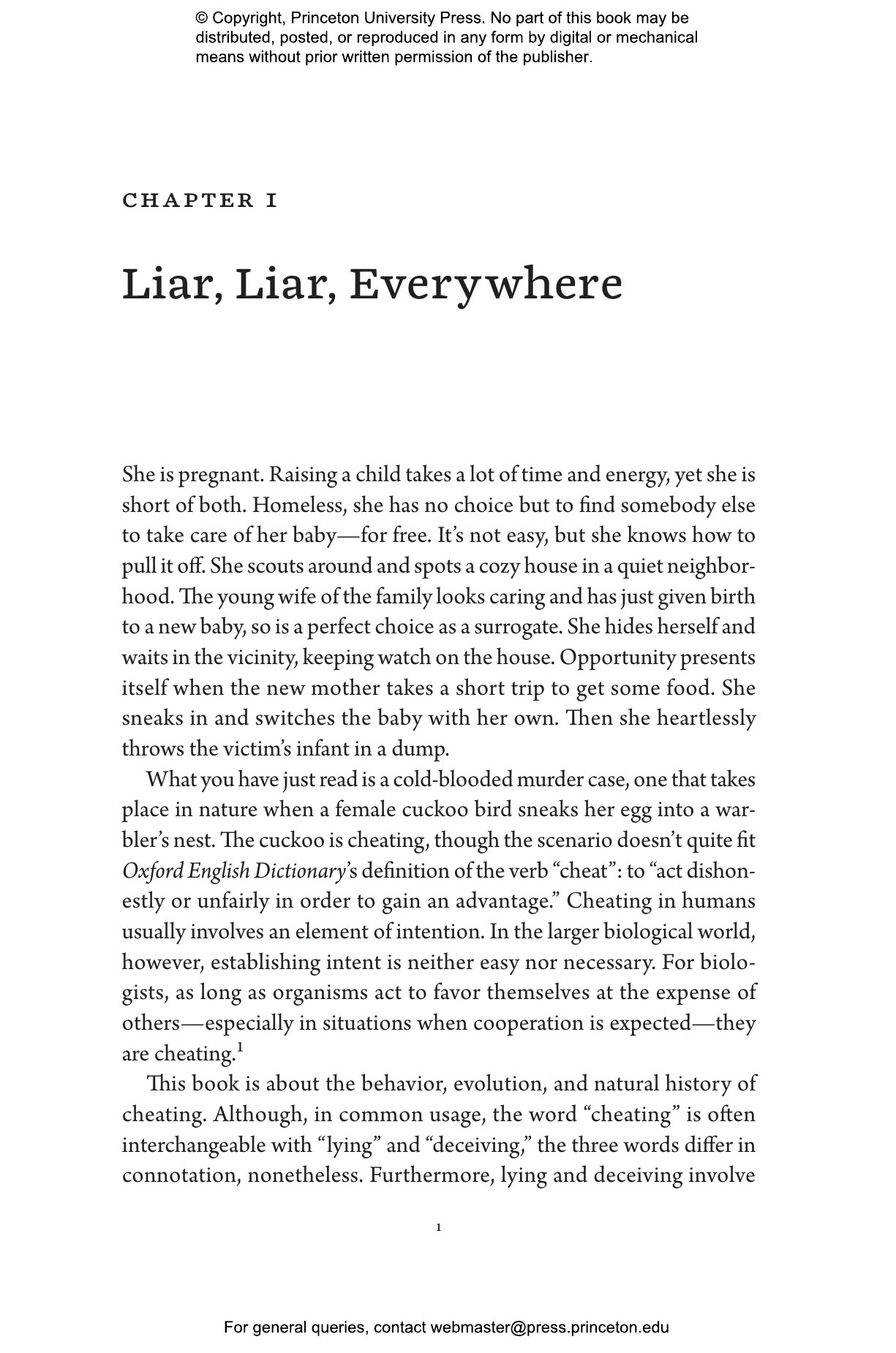 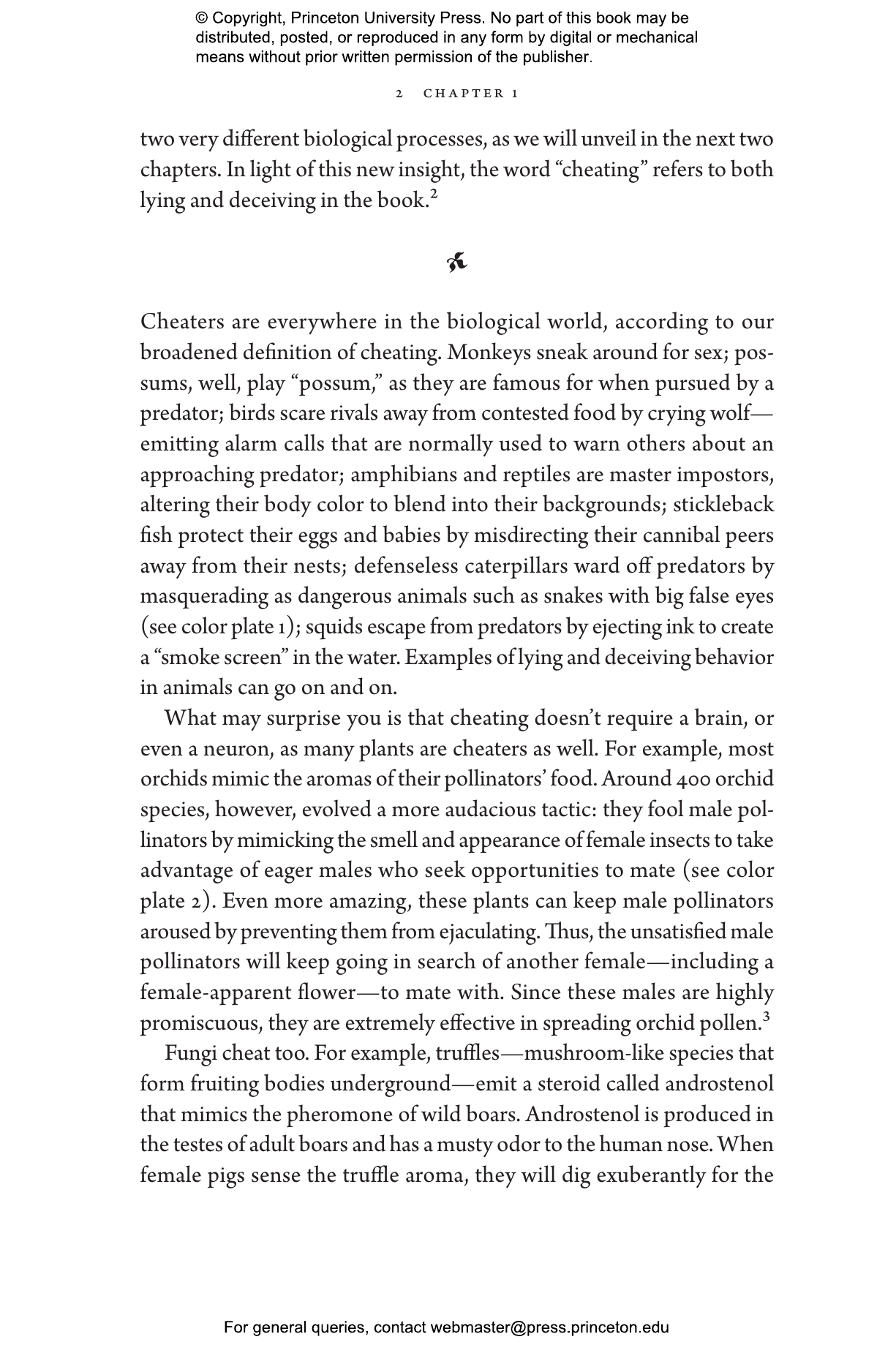 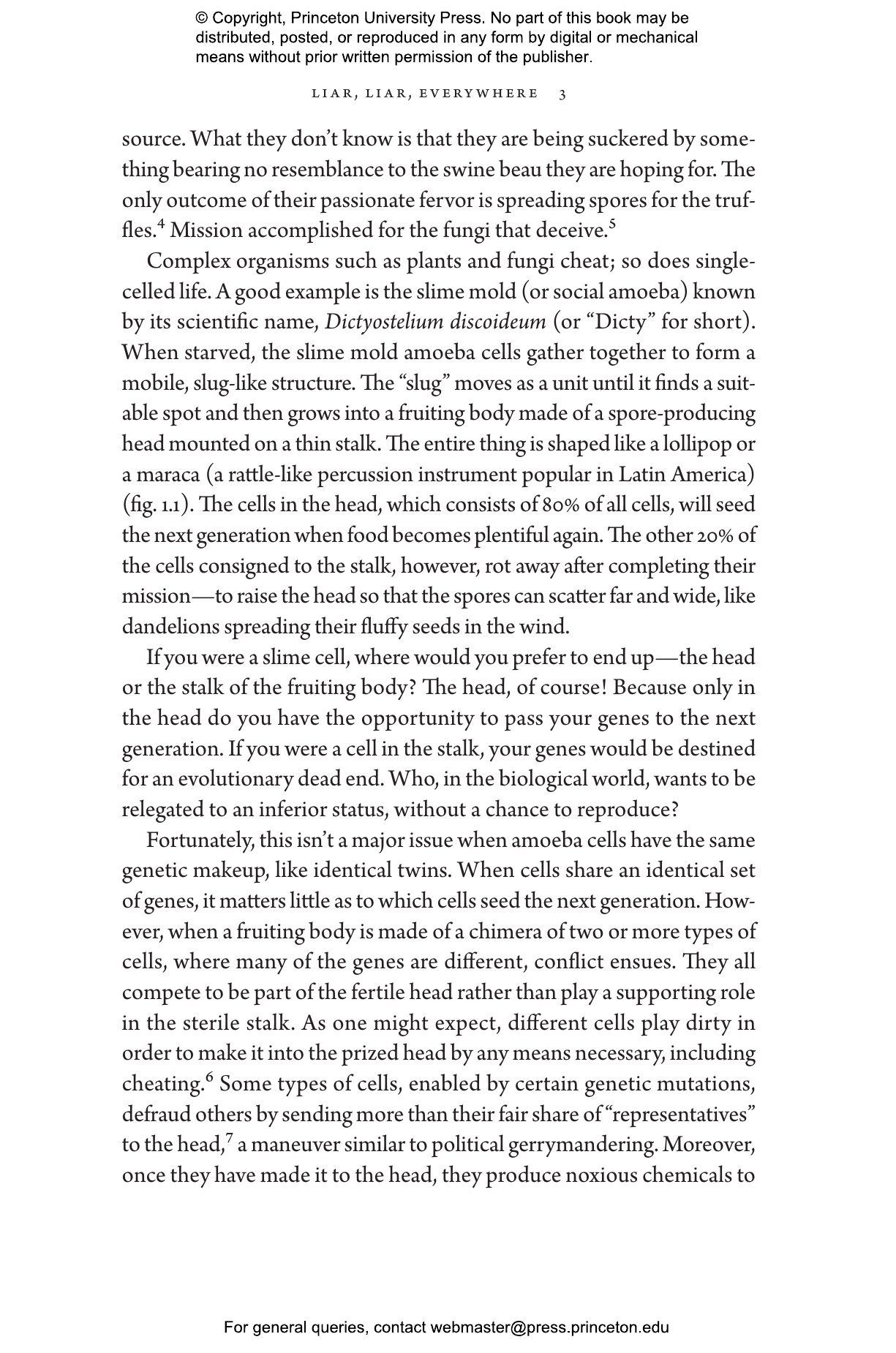 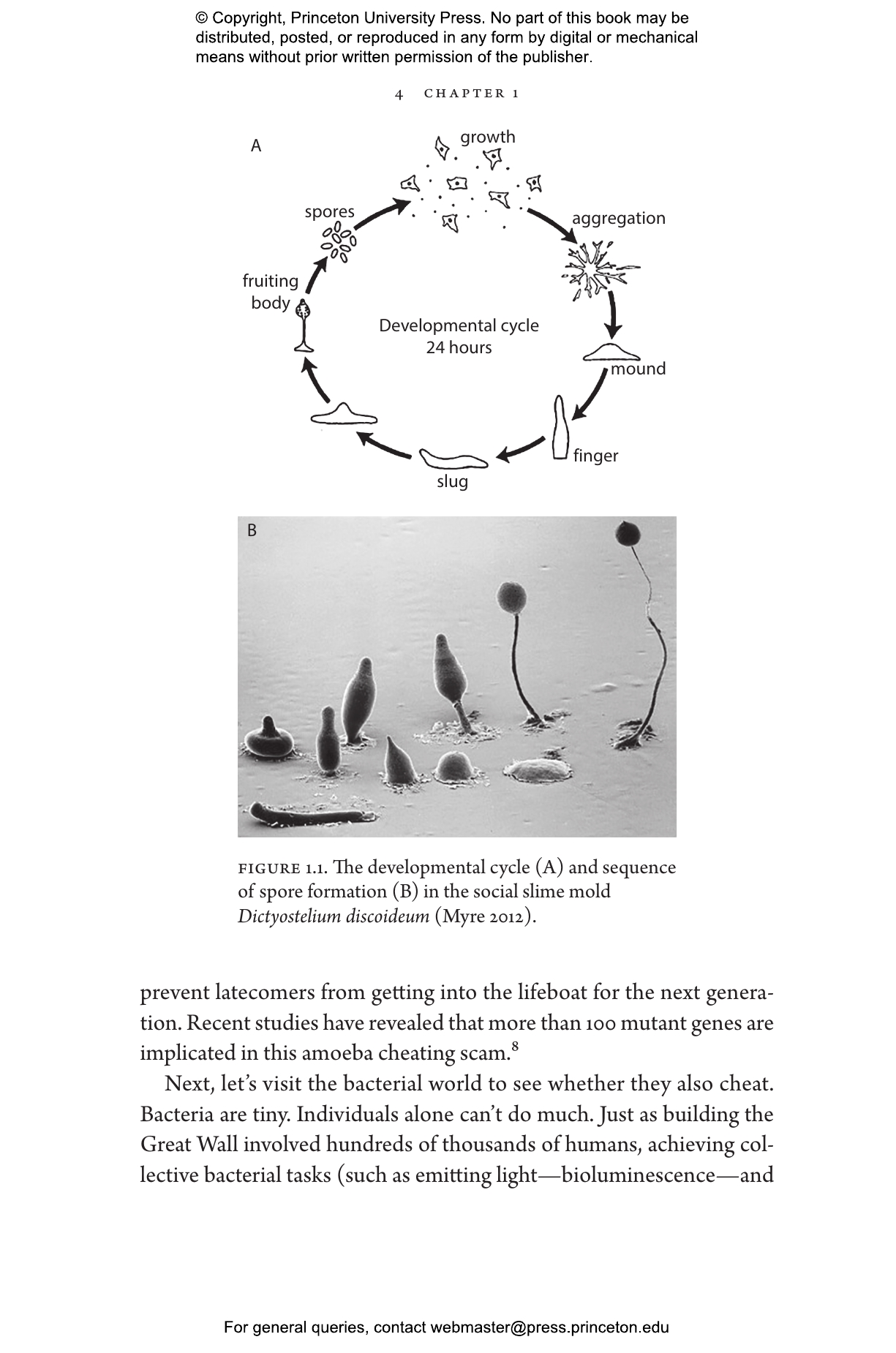 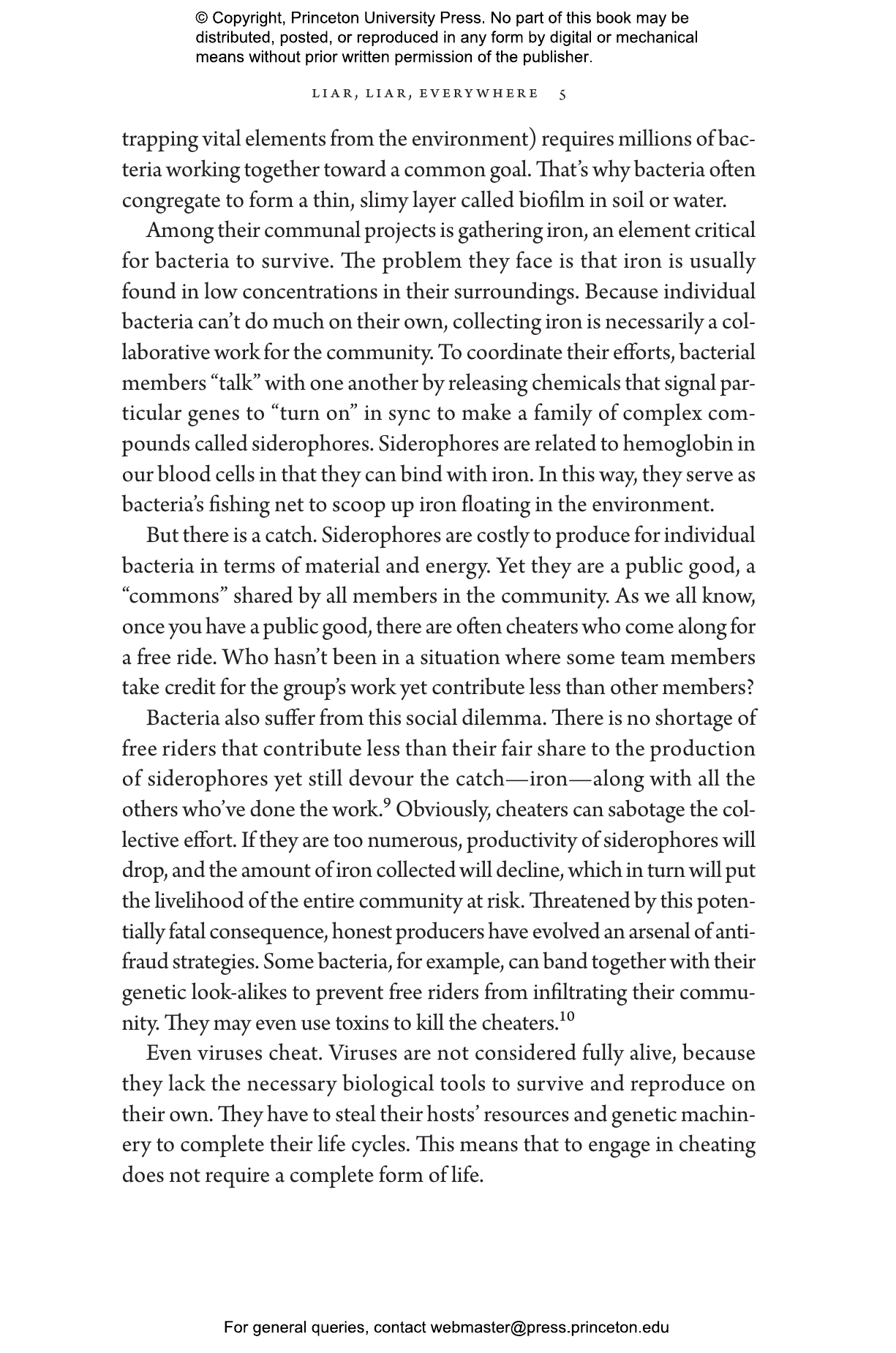 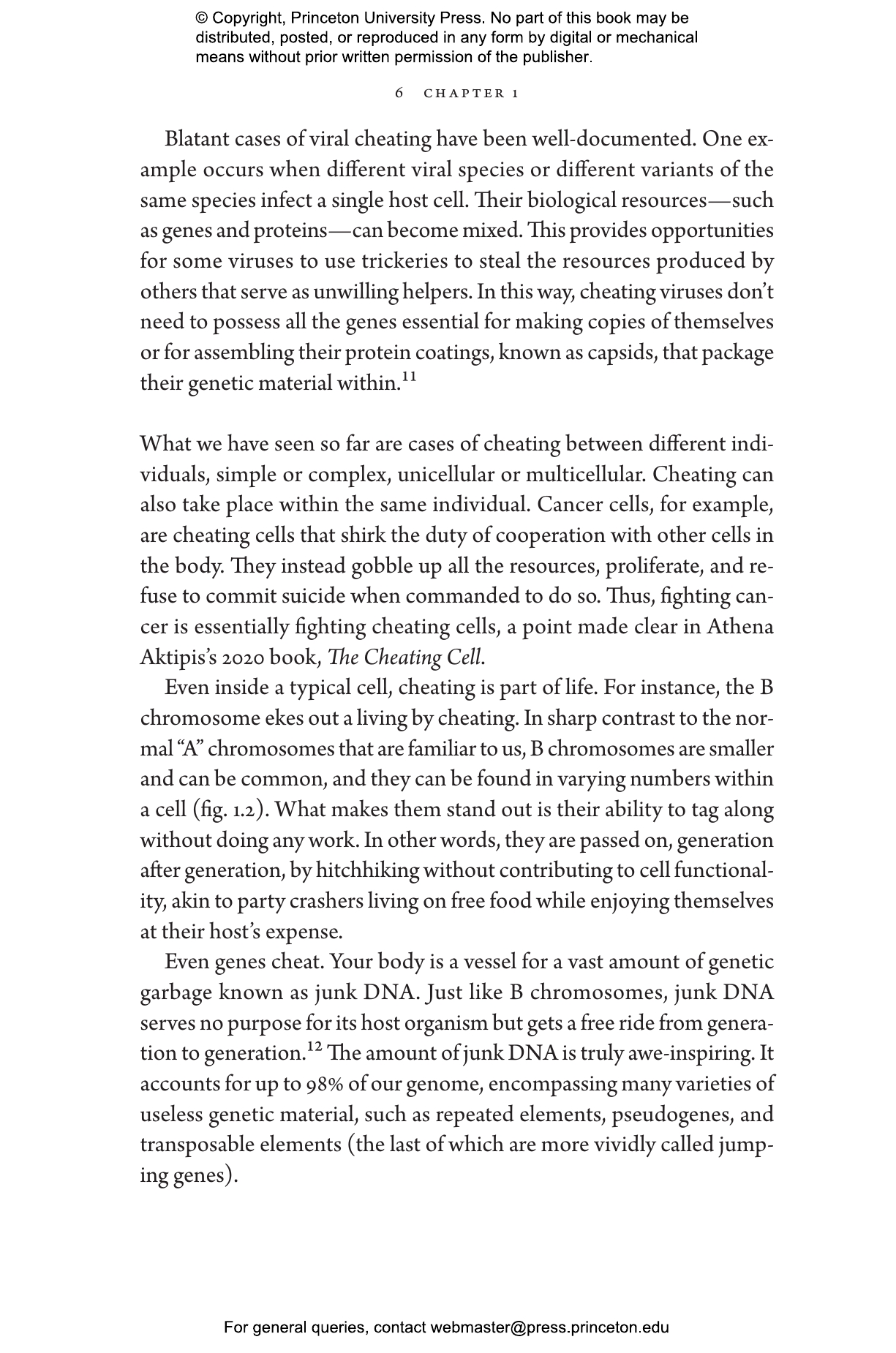 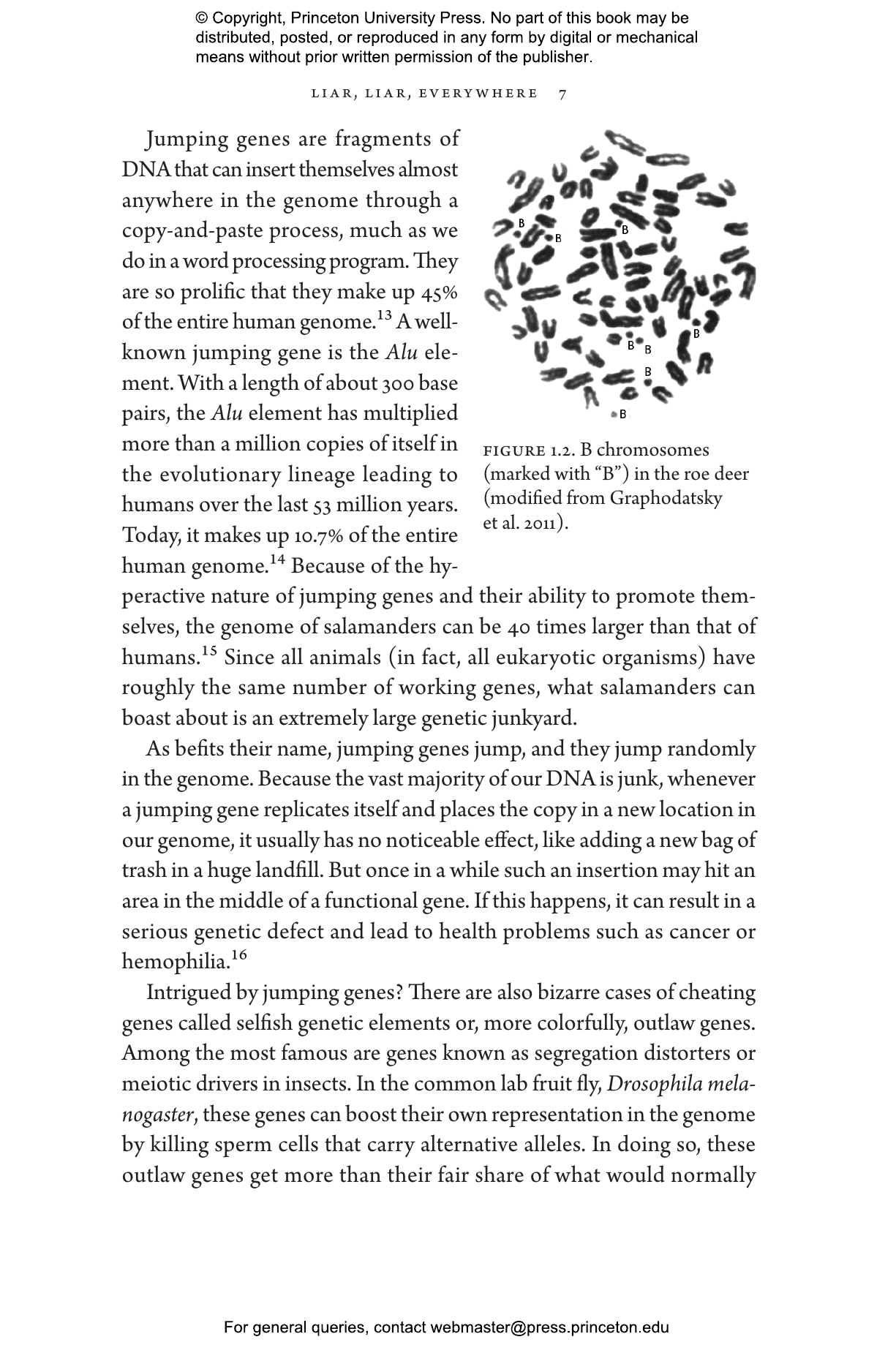 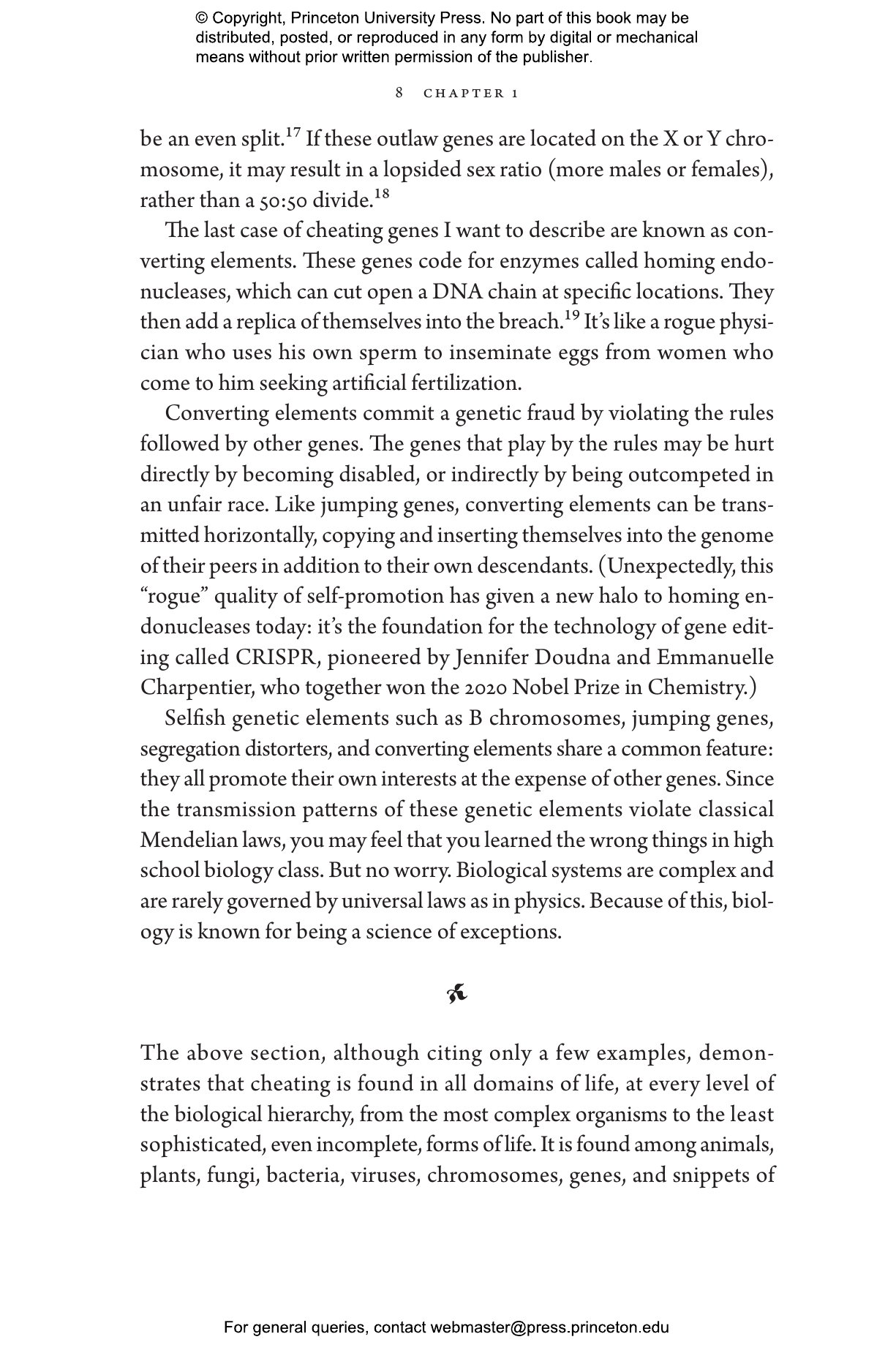 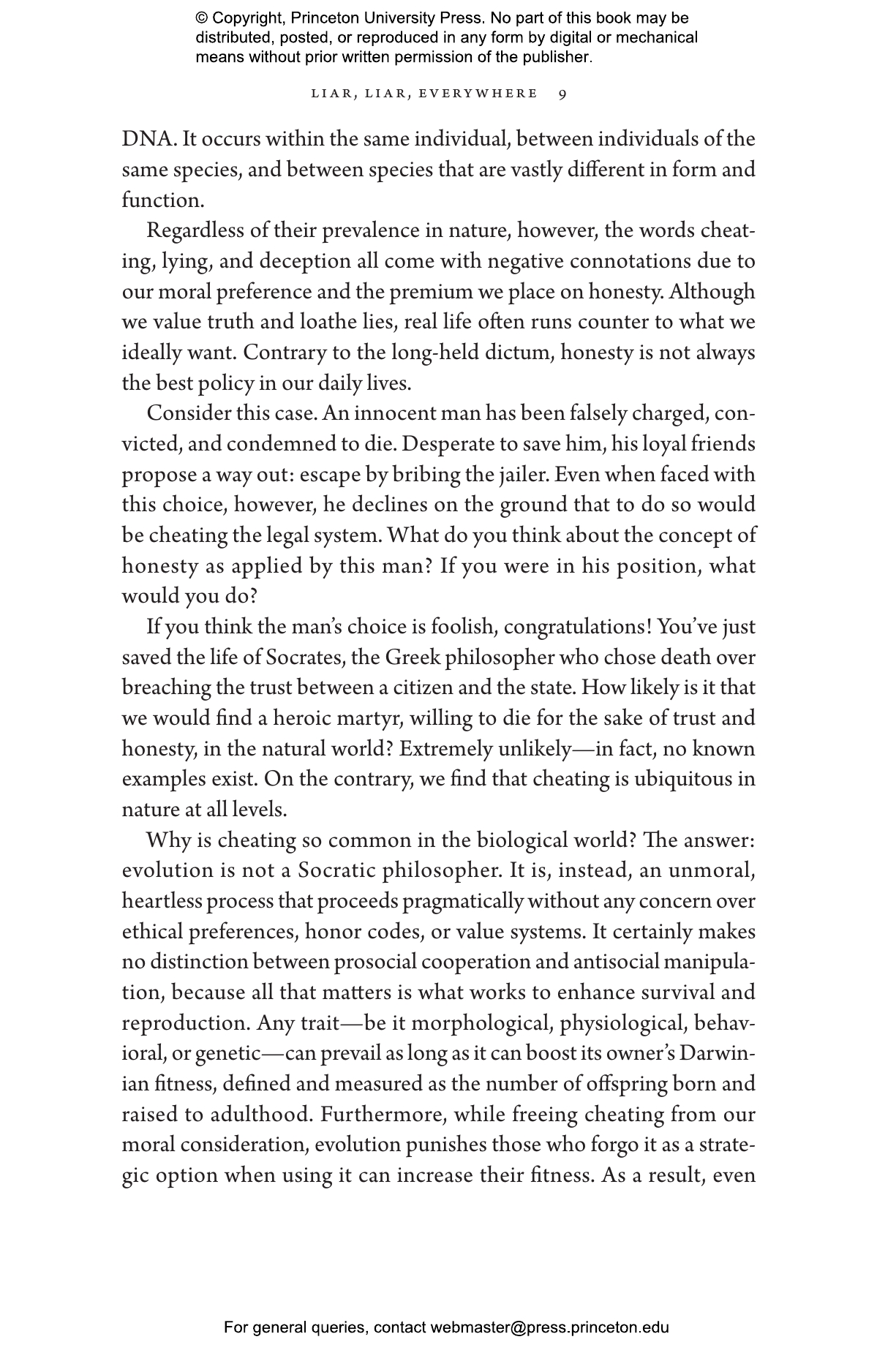 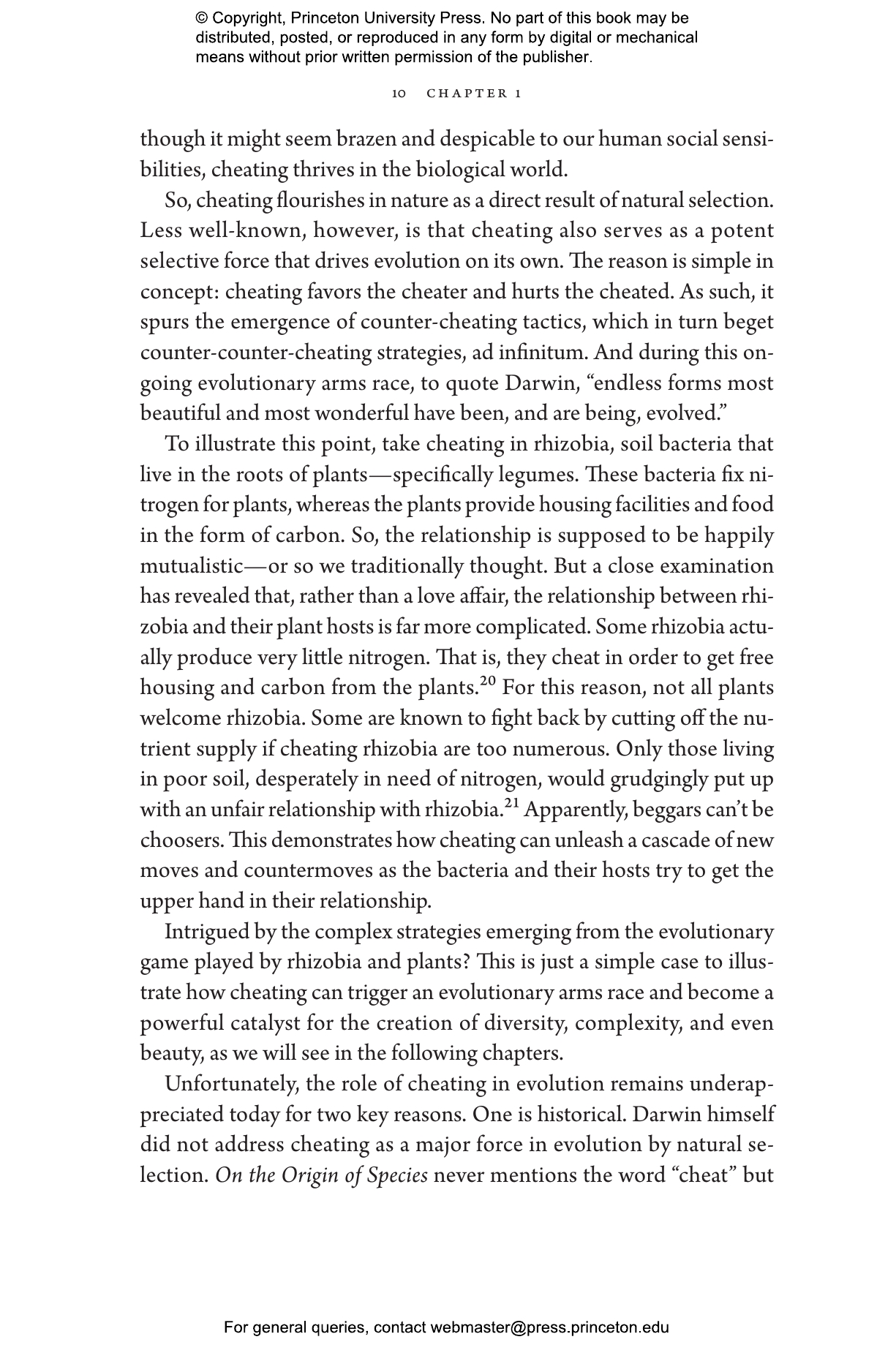 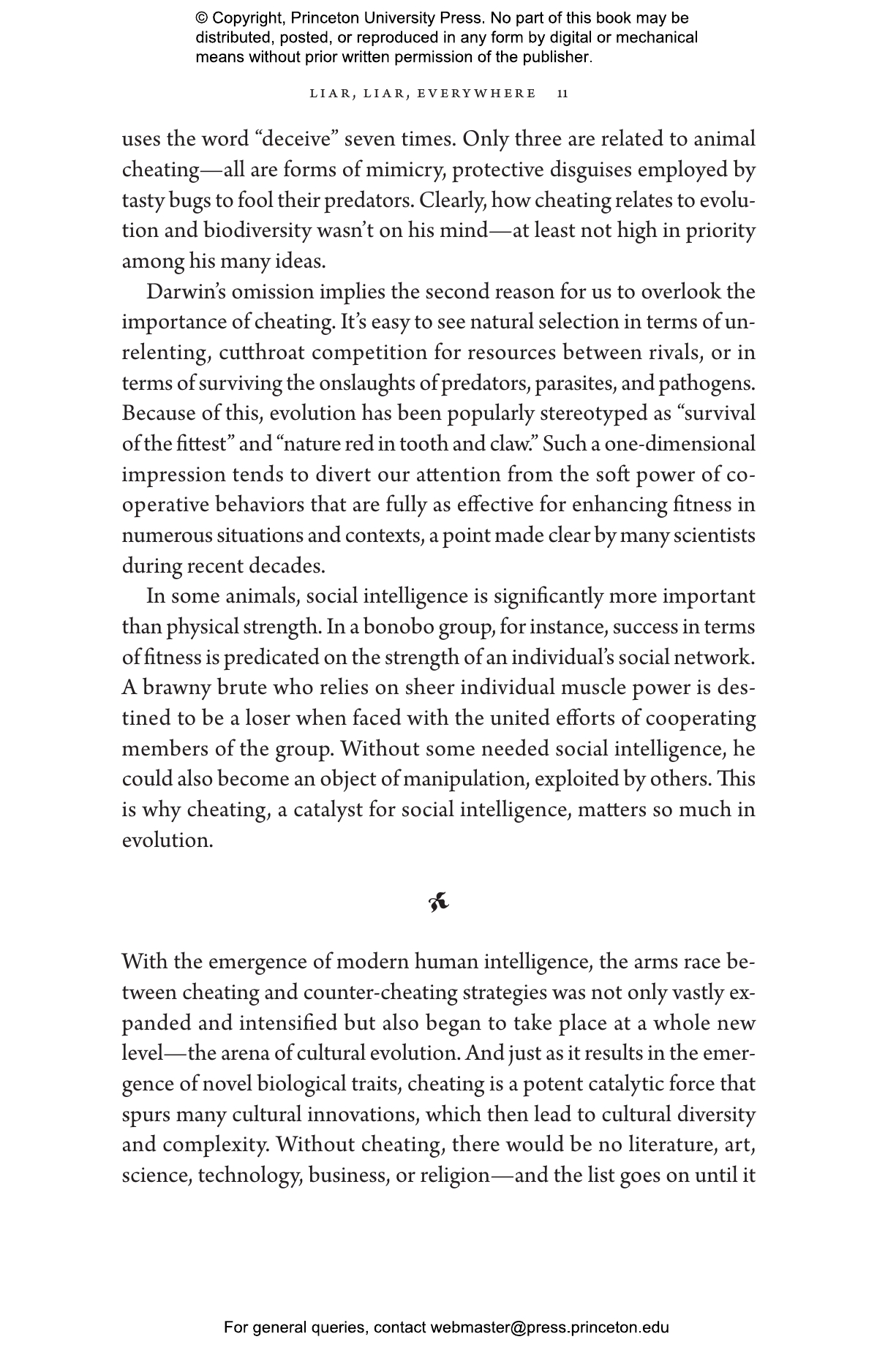 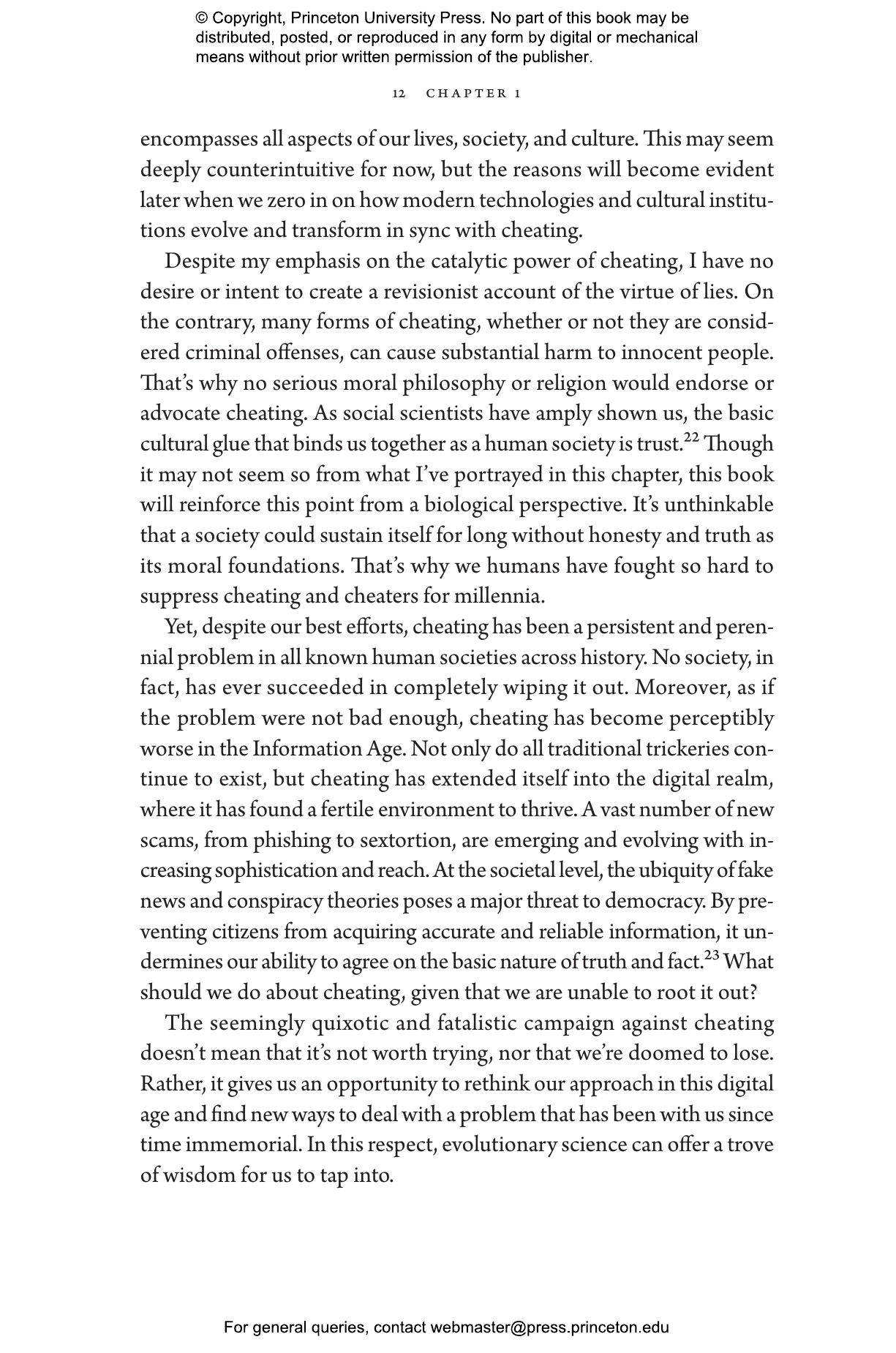 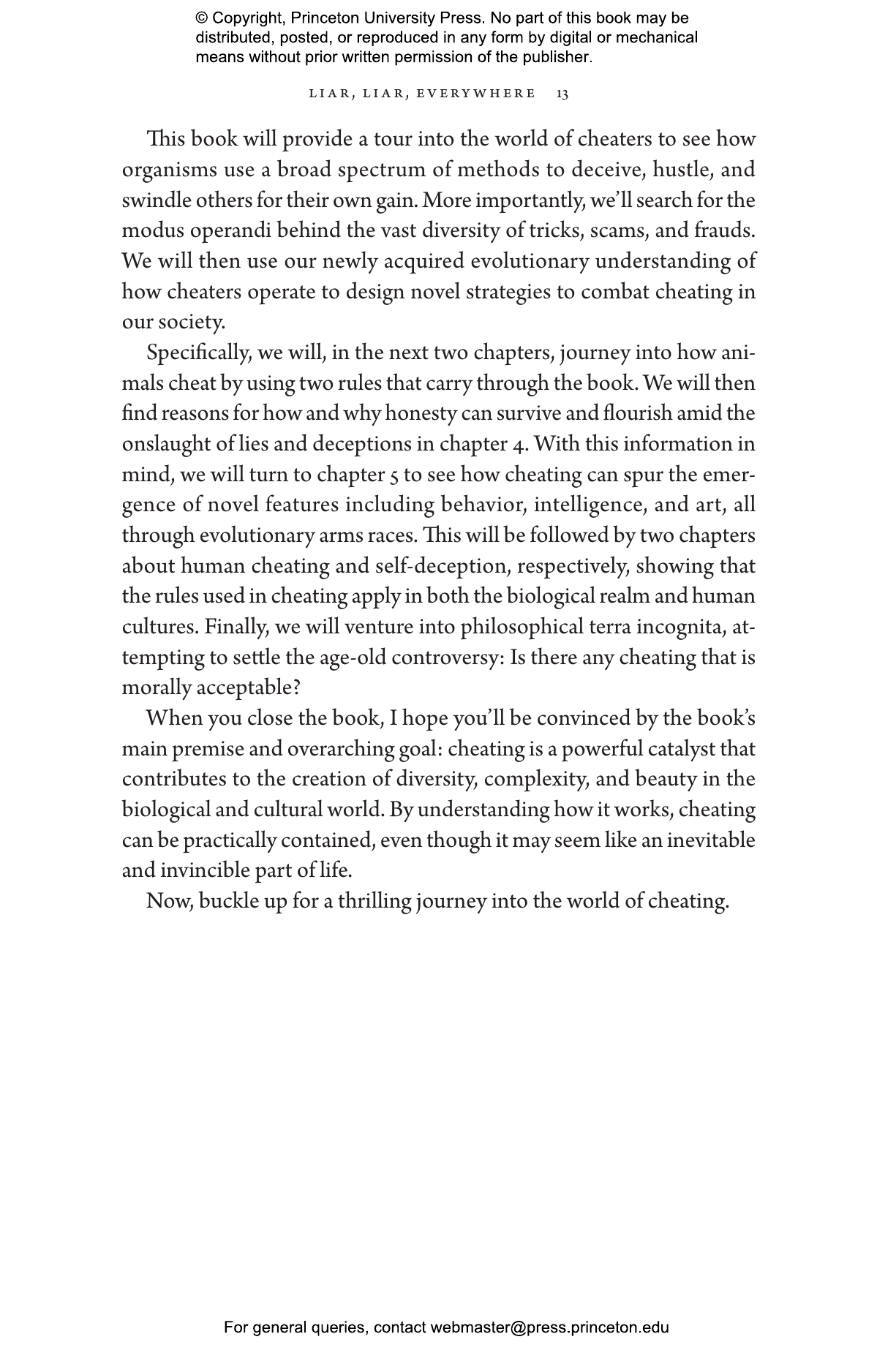 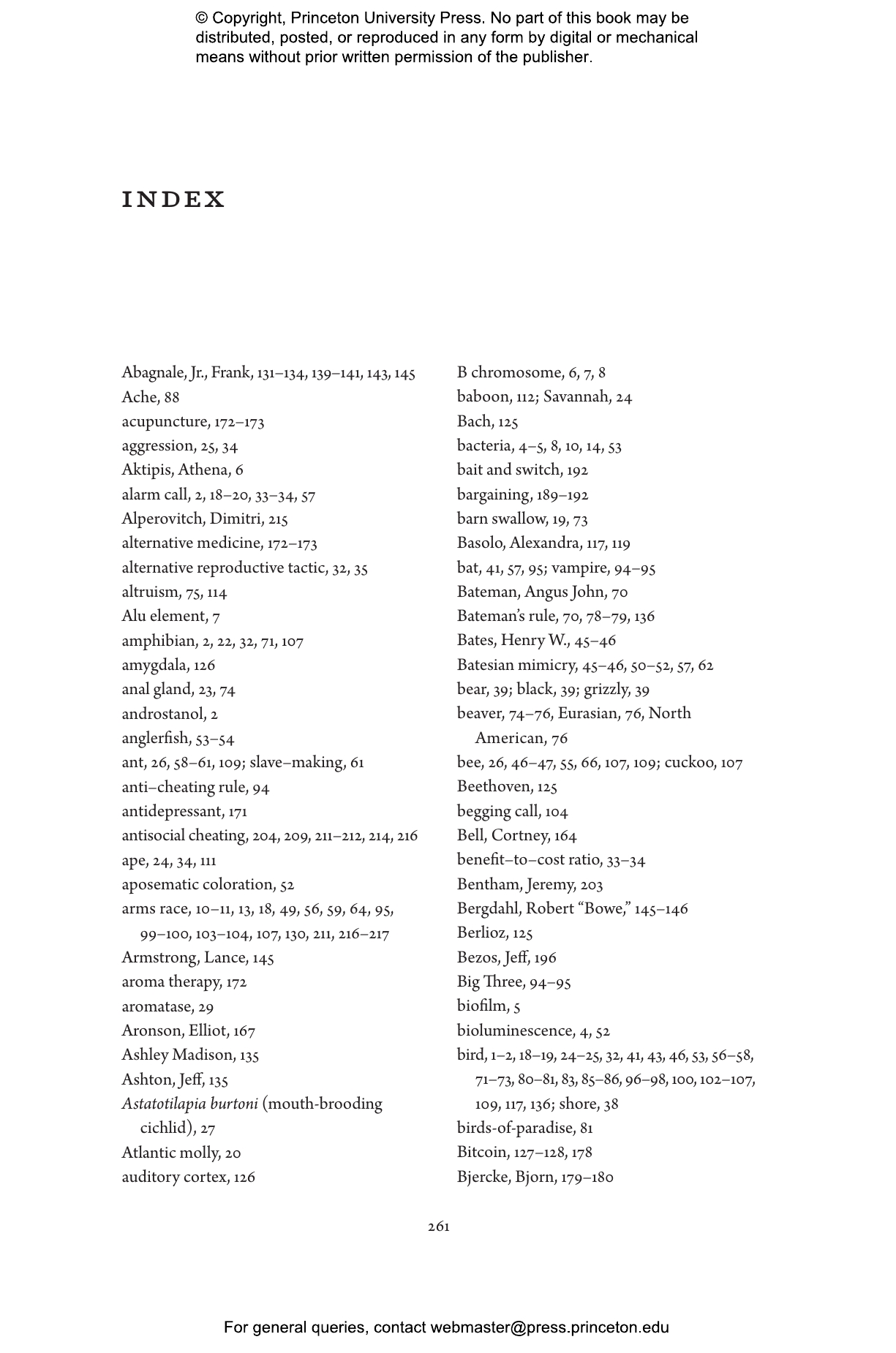 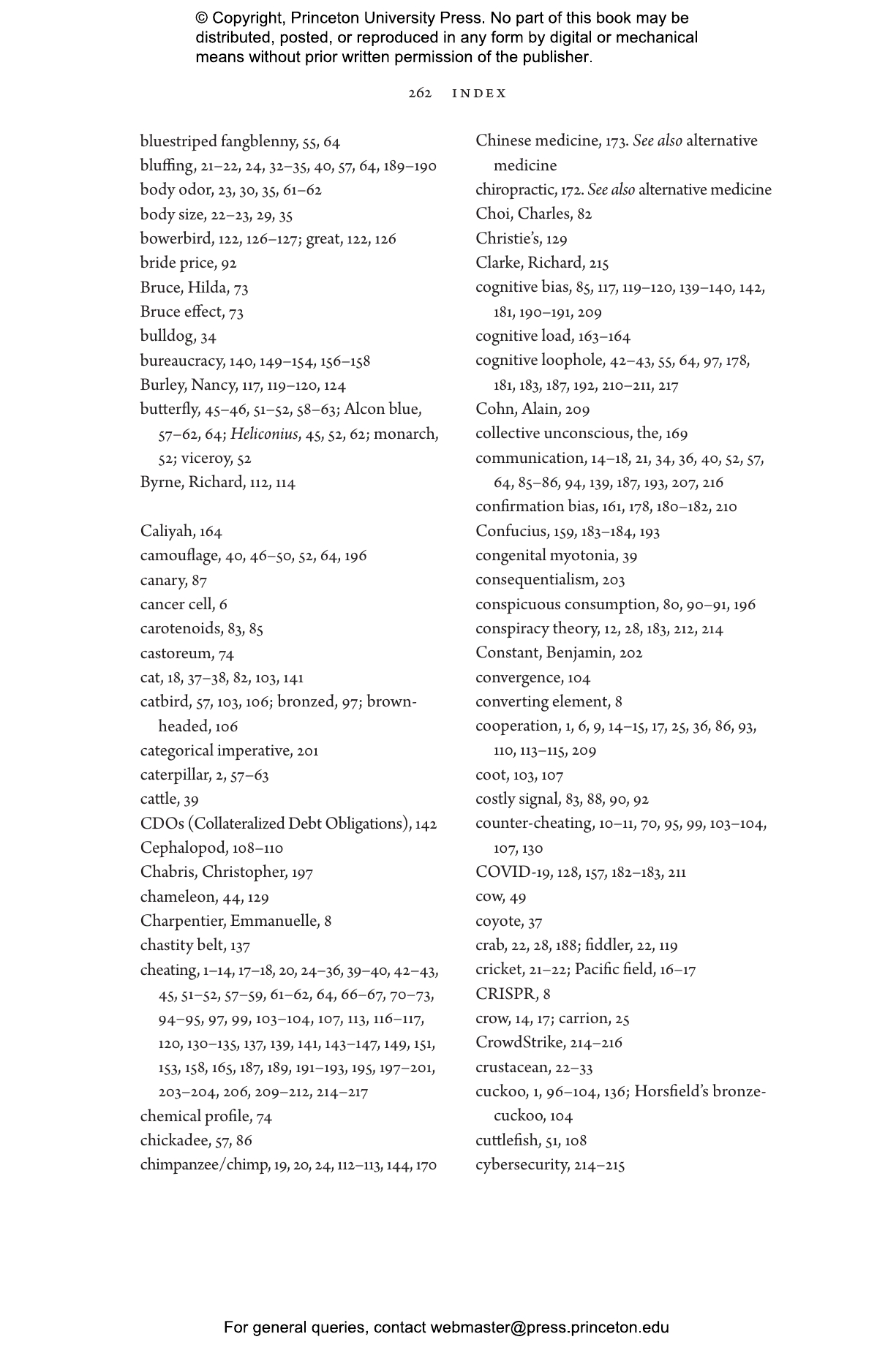 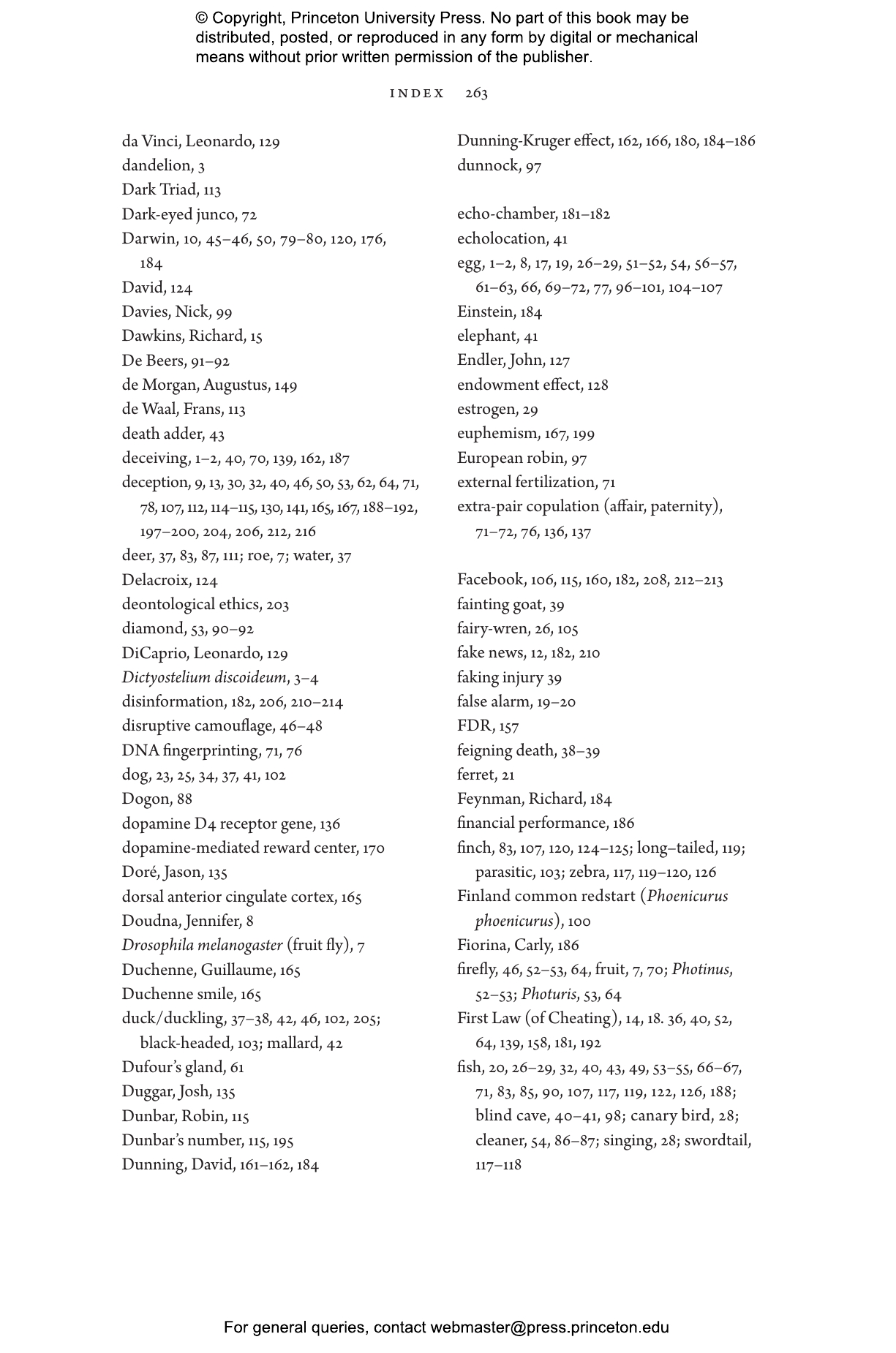 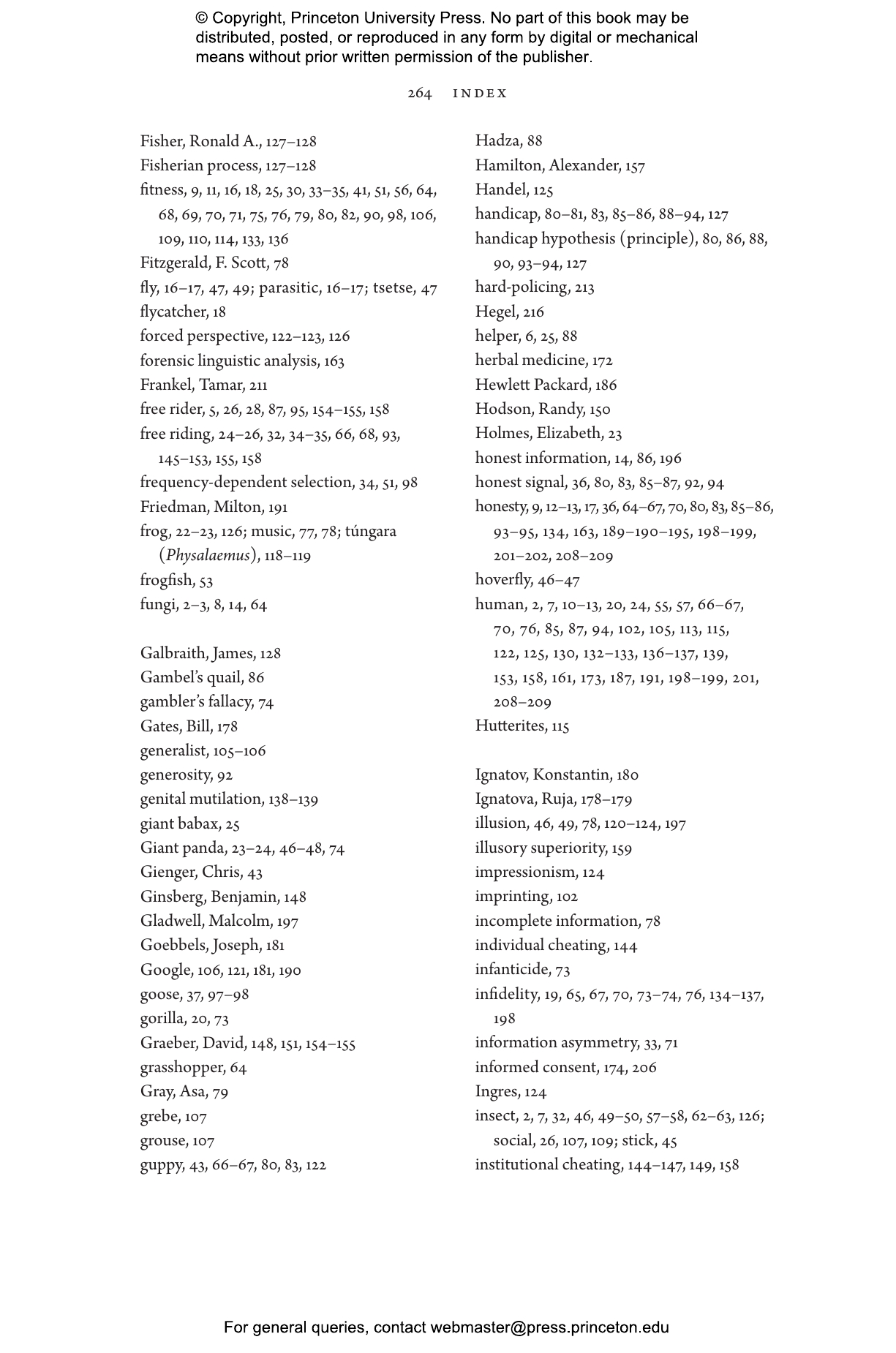 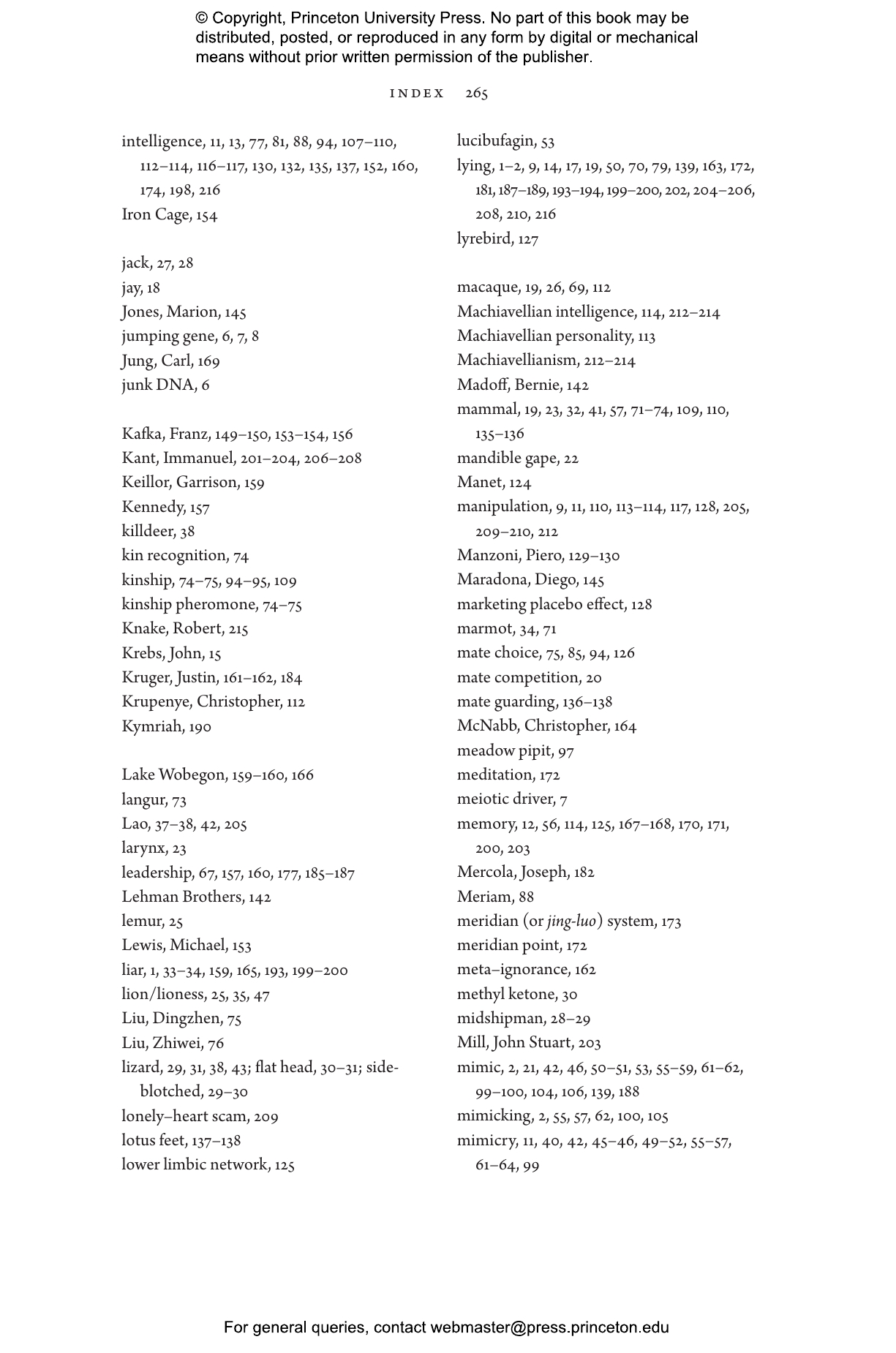 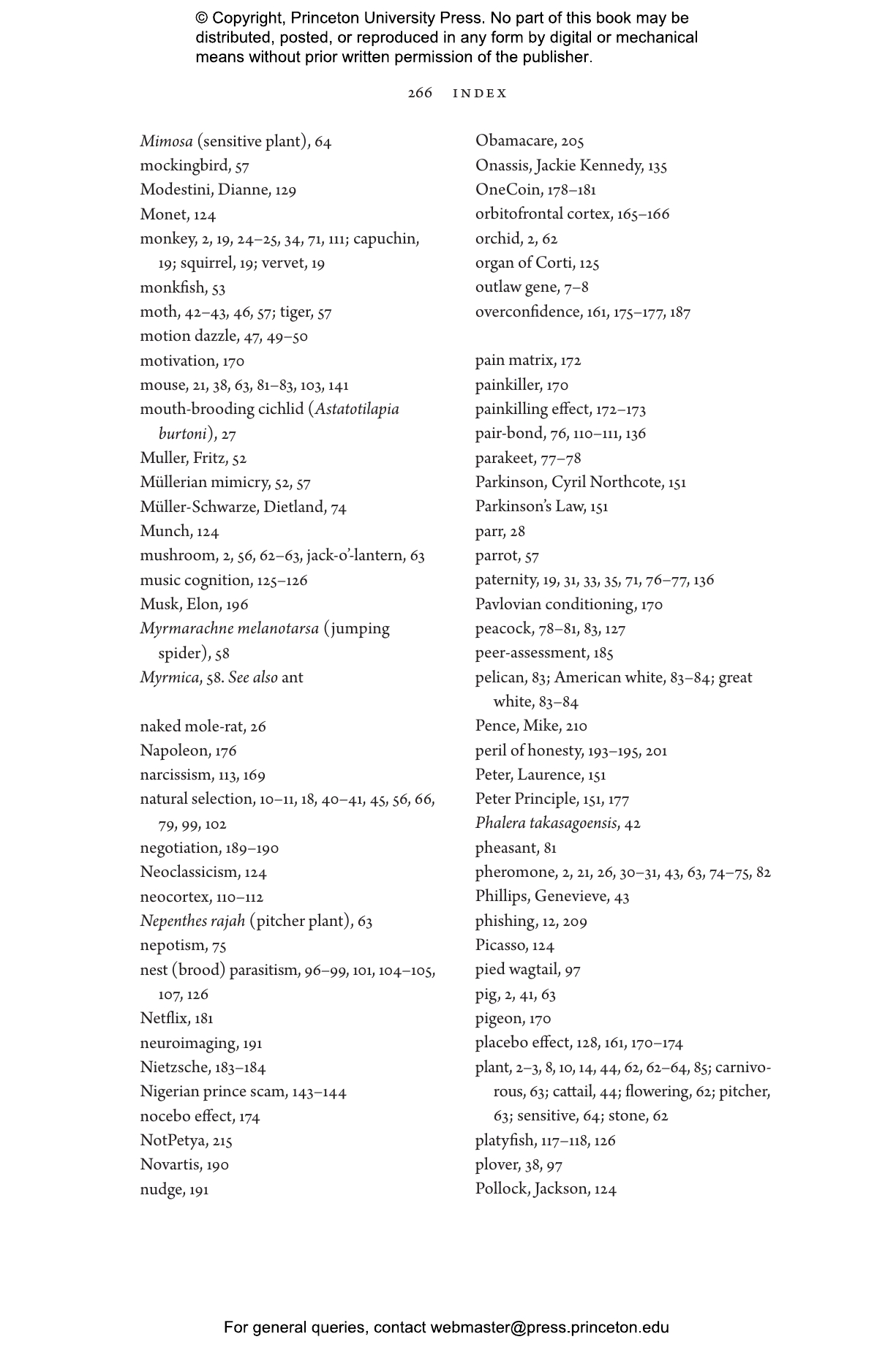 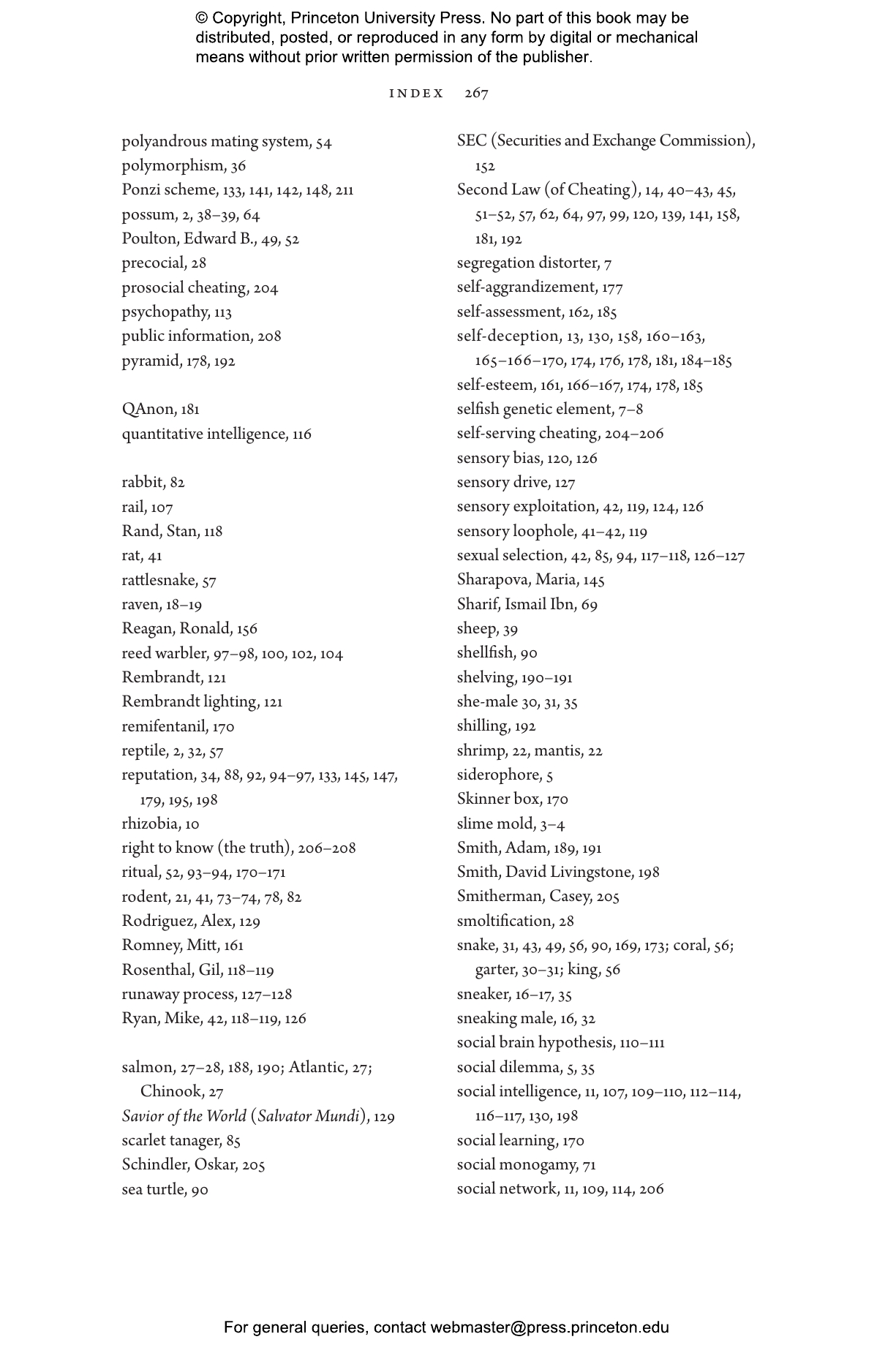 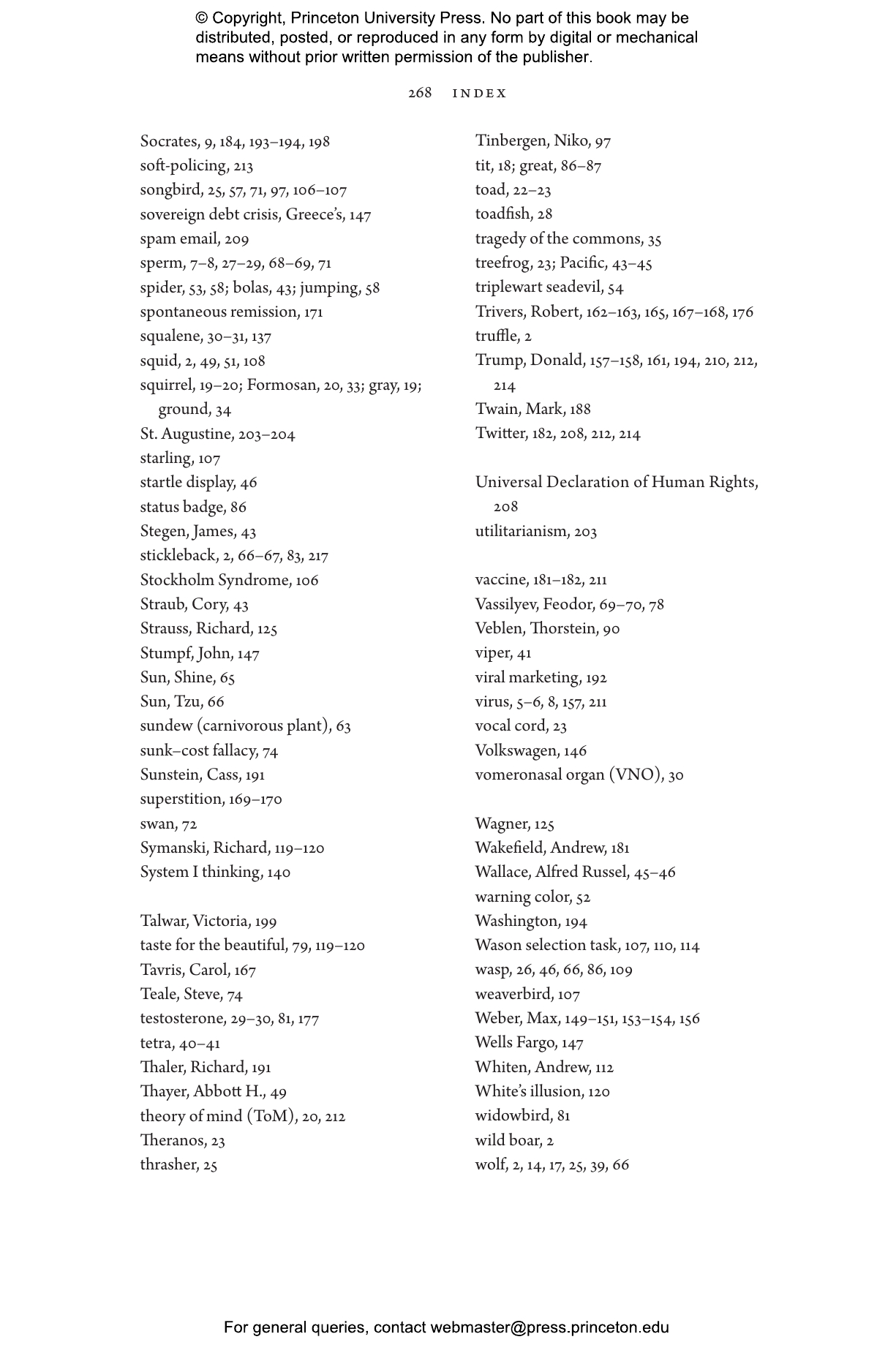 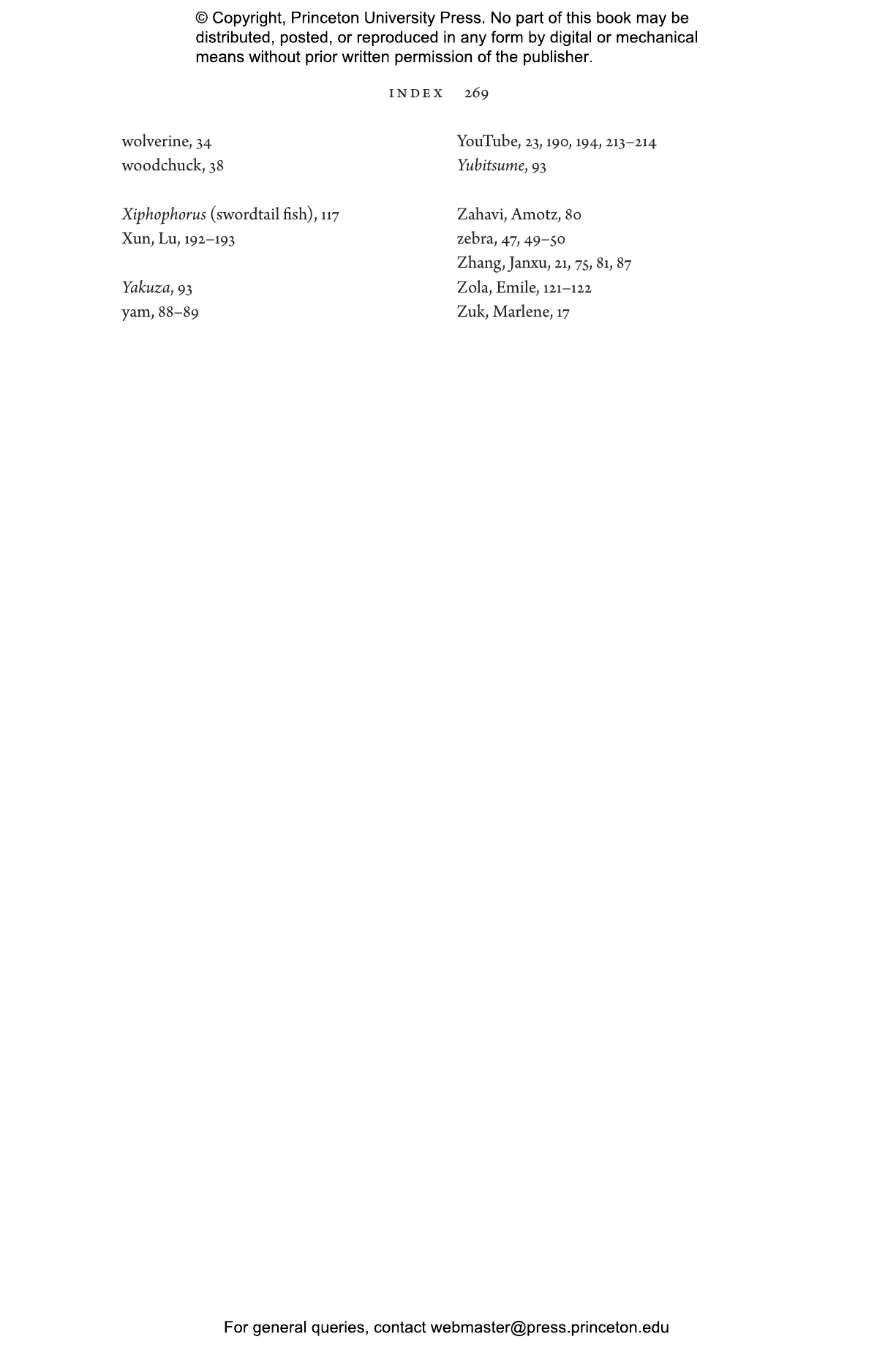 A natural history of cheating from selfish genes to lying politicians 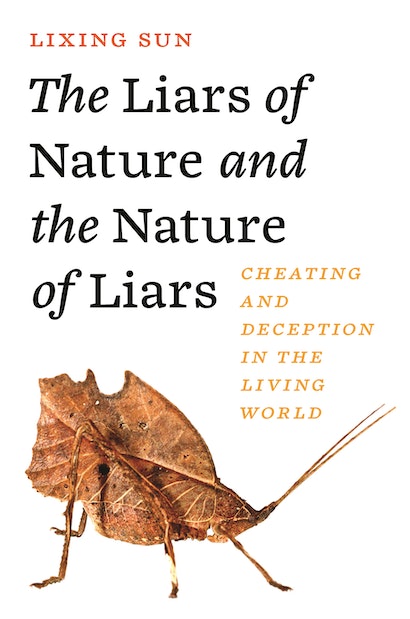 Nature is rife with cheating. Possums play possum, feigning death to cheat predators. Crows cry wolf to scare off rivals. Amphibians and reptiles are inveterate impostors. Even genes and cells cheat. The Liars of Nature and the Nature of Liars explores the evolution of cheating in the natural world, revealing how dishonesty has given rise to wondrous diversity.

Blending cutting-edge science with a wealth of illuminating examples—from microscopic organisms to highly intelligent birds and mammals—Lixing Sun shows how cheating in nature relies on two basic rules. One is lying, by which cheaters exploit honest messages in communication signals and use them to serve their own interests. The other is deceiving, by which cheaters exploit the biases and loopholes in the sensory systems of other creatures. Sun demonstrates that cheating serves as a potent catalyst in the evolutionary arms race between the cheating and the cheated, resulting in a biological world teeming with complexity and beauty.

Brimming with insight and humor, The Liars of Nature and the Nature of Liars also looks at the prevalence of cheating in human society, identifying the kinds of cheating that spur innovation and cultural vitality and laying down a blueprint for combatting malicious cheating such as fake news and disinformation.

Lixing Sun is Distinguished Research Professor in the Department of Biological Sciences at Central Washington University. He is the author of The Fairness Instinct: The Robin Hood Mentality and Our Biological Nature and the coauthor of The Beaver: Natural History of a Wetlands Engineer.

"The accessible prose offers an eye-opening take on lying in the natural world and how evolutionary pressures to deceive impact human behavior. The smart parallels between humans and animals make for an insightful outing."—Publishers Weekly

“While our species has no lack of dishonesty and self-deception, we are not as exceptional as we think. This eye-opening book by Lixing Sun expertly explains how the natural world is filled to the brim with misleading signals and subterfuge.”—Frans de Waal, author of Different: Gender through the Eyes of a Primatologist

“In this wide-ranging book, Lixing Sun argues that lying and deceiving can be found in all domains of life ranging from bacteria, fungi, and genes to more complex plants and animals. Buckle up for a thrilling journey into the wide world of cheating. Sun’s book opened my eyes to ideas I had never before entertained.”—Marc Bekoff, University of Colorado Boulder, coauthor of Wild Justice and A Dog’s World

“A refreshingly fun take on cheating and free riding in the natural world. From cuckoos and crabs to cheating bureaucrats, Sun paints a brightly colored world filled with innovative impostors, creative liars, and brilliant nervous-system hackers.”—Athena Aktipis, author of The Cheating Cell: How Evolution Helps Us Understand and Treat Cancer and host of the Zombified podcast