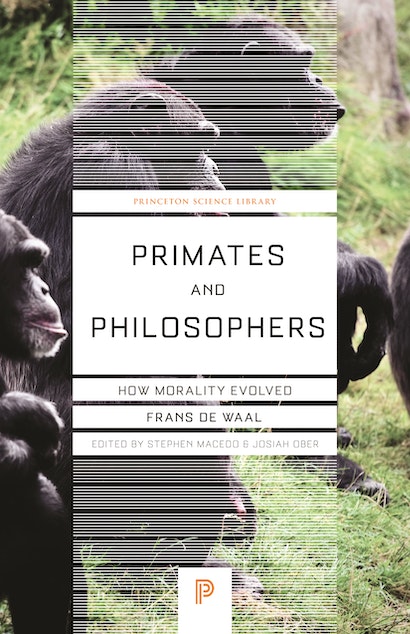 Can virtuous behavior be explained by nature, and not by human rational choice? “It’s the animal in us,” we often hear when we’ve been bad. But why not when we’re good? Primates and Philosophers tackles this question by exploring the biological foundations of one of humanity’s most valued traits: morality.


In this provocative book, renowned primatologist Frans de Waal argues that modern-day evolutionary biology takes far too dim a view of the natural world, emphasizing our “selfish” genes and reinforcing our habit of labeling ethical behavior as humane and the less civilized as animalistic. Seeking the origin of human morality not in evolution but in human culture, science insists that we are moral by choice, not by nature.


Citing remarkable evidence based on his extensive research of primate behavior, de Waal attacks “Veneer Theory,” which posits morality as a thin overlay on an otherwise nasty nature. He explains how we evolved from a long line of animals that care for the weak and build cooperation with reciprocal transactions. Drawing on Darwin, recent scientific advances, and his extensive research of primate behavior, de Waal demonstrates a strong continuity between human and animal behavior. He probes issues such as anthropomorphism and human responsibilities toward animals. His compelling account of how human morality evolved out of mammalian society will fascinate anyone who has ever wondered about the origins and reach of human goodness.


Based on the Tanner Lectures de Waal delivered at Princeton University’s Center for Human Values in 2004, Primates and Philosophers includes responses by the philosophers Peter Singer, Christine M. Korsgaard, and Philip Kitcher and the science writer Robert Wright. They press de Waal to clarify the differences between humans and other animals, yielding a lively debate that will fascinate all those who wonder about the origins and reach of human goodness.

Frans de Waal is the C. H. Candler Professor of Psychology at Emory University and director of the Living Links Center at the Yerkes National Primate Center in Atlanta.

"Frans de Waal defends against philosopher critics his view that the roots of morality can be seen in the social behavior of monkeys and apes. . . . [H]e argues that human morality would be impossible without certain emotional buildings blocks that are clearly at work in chimps and monkey societies. . . . Dr. de Waal sees human morality as having grown out of primate sociality, but with two extra levels of sophistication. People enforce their society's moral codes much more rigorously with rewards, punishments and reputation building. They also apply a degree of judgment and reason, for which there are no parallels in animals."—Nicholas Wade, The New York Times

"De Waal is one of the world's foremost authorities on nonhuman primates, and his thoughtful contribution to Primates and Philosophers is enriched by decades of close observation of their behavior. . . . He argues that humans are like their closest evolutionary kin in being moral by nature. . . . [A]n impressively well-focused collection of essays."—John Gray, New York Review of Books

"Frans de Waal . . . argues that . . . morality is actually a gift from animal ancestors and that people are good not by choice but by nature. . . . He argues that . . . critics fail to recognize that while animals are not human, humans are animals."—Science News

"Dutch-born psychologist, ethologist and primatologist Frans de Waal has spent his career watching the behavior of apes and monkeys, mostly captive troupes in zoos. . . . His work . . . has helped lift Darwin's conjectures about the evolution of morality to a new level. . . . [De Waal argues that] sympathy, empathy, right and wrong are feelings that we share with other animals; even the best part of human nature, the part that cares about ethics and justice, is also part of nature."—Jonathan Weiner, Scientific American

"Frans de Waal . . . show[s] how elements of morality such as empathy, sympathy, community concern and a sense of fairness also exist in our closest primate relatives."—David Sloan Wilson, American Scientist

"In his new book, Primates and Philosophers, Frans de Waal argues that the origins of human goodness can be seen in apes and monkeys. He claims that we have evolved from a long line of social animals for whom close co-operation is 'not an option but a survival strategy'. Not only are we nice by nature, but our ancestors were too, ever since they came down from the proverbial trees."—Stephen Cave, Financial Times

"Frans de Waal, an acclaimed primatologist, has much to say about what he considers the biological origins of morality. Unlike many recent antireligion writers such as Richard Dawkins, Sam Harris, and Daniel Dennett, who use the latest socio-biological research to campaign against religion, de Waal has no antireligious agenda. This both keeps his writing more focused and helps him avoid many of the argumentative errors of Dawkins and company...De Waal is a keen social observer, but he focuses mostly on what we can learn from what he knows best–the study of primates, including the human variety."—Joe Pettit, Commonweal

"[A] remarkably interesting and rich set of reflections about the nature of morality, the social experiences of nonhuman primates, and the continuities and differences between the social experiences of human and nonhuman primates. The book can be read both as discussion on the nature of evolution and as a primer on ethical theory. . . . All in all this is an extremely interesting book on a central human preoccupation–the question of our relationship with Nature–and is a demonstration that the collaboration of sympathetic points of view can produce a wider and wiser whole."—Eric Dayton, The Structurist

"This fascinating book by one of the leading primatologists examines the biological foundations of morality as it grows out of primate sociality while remaining within a framework of random natural selection. . . . An informative and accessible discussion to an important topic."—David Lorimer, Paradigm Explorer

"Frans de Waal has achieved that state of grace for a scientist—doing research that is both rigorous and wildly creative, and in the process has redefined how we think about the most interesting realms of behavior among nonhuman primates—cooperation, reconciliation, a sense of fairness, and even the rudiments of morality. In these Tanner lectures and the subsequent dialogue with leading philosophers and evolutionary psychologists, de Waal takes this knowledge to redefine how we think of morality in another primate, namely ourselves. This is superb and greatly challenging thinking."—Robert M. Sapolsky, author of Why Zebras Don't Get Ulcers and A Primate's Memoir

"On the basis of a fascinating and provocative account of the remarkable continuities between the social emotions of humans and of nonhuman primates, de Waal develops a compelling case—which moral philosophers would do well to take seriously—for the evolutionary roots of human morality. In addition, he and his commentators conduct an illuminating discussion of some fundamental methodological and ethical issues—such as whether it is necessarily illicit to characterize animal behavior 'anthropomorphically,' and whether it is reasonable to attribute 'rights' to animals. Anyone who is interested in these issues, and especially those interested in the sources of human morality, will find this book exceptionally challenging and worthwhile."—Harry Frankfurt, author of On Bullshit

"Frans de Waal is the perfect guide to the emerging data on moral-like behavior in animals. Strengthened by deep sensitivity to the complexity of social relations and by a strong defense of anthropomorphism, this book shows how evolutionary biology can contribute to moral philosophy not merely through general principles, but by specific phylogenetic comparisons. It is a major advance in the socialization of ethology."—Richard Wrangham, Harvard University, coauthor of Demonic Males: Apes and the Origins of Human Violence

"Here, Frans de Waal, the world's leading researcher on primate behavior, a highly reflective thinker, and a skilled writer, presents the fruits of thirty years of empirical research. Addressing some of the most fundamental issues of social science and moral theory, he and the commentators produce a book that will be of deep and enduring interest to philosophers, social and political theorists, and anyone who wishes to assess their views about human nature and the nature of morality."—John Gray, London School of Economics, author of Straw Dogs: Thoughts on Humans and Other Animals

"This important book centers on Frans de Waal's powerful statement about the psychological nature of moral behavior, which involves strong continuities between humans and apes."—Christopher Boehm, University of Southern California, author of Hierarchy in the Forest