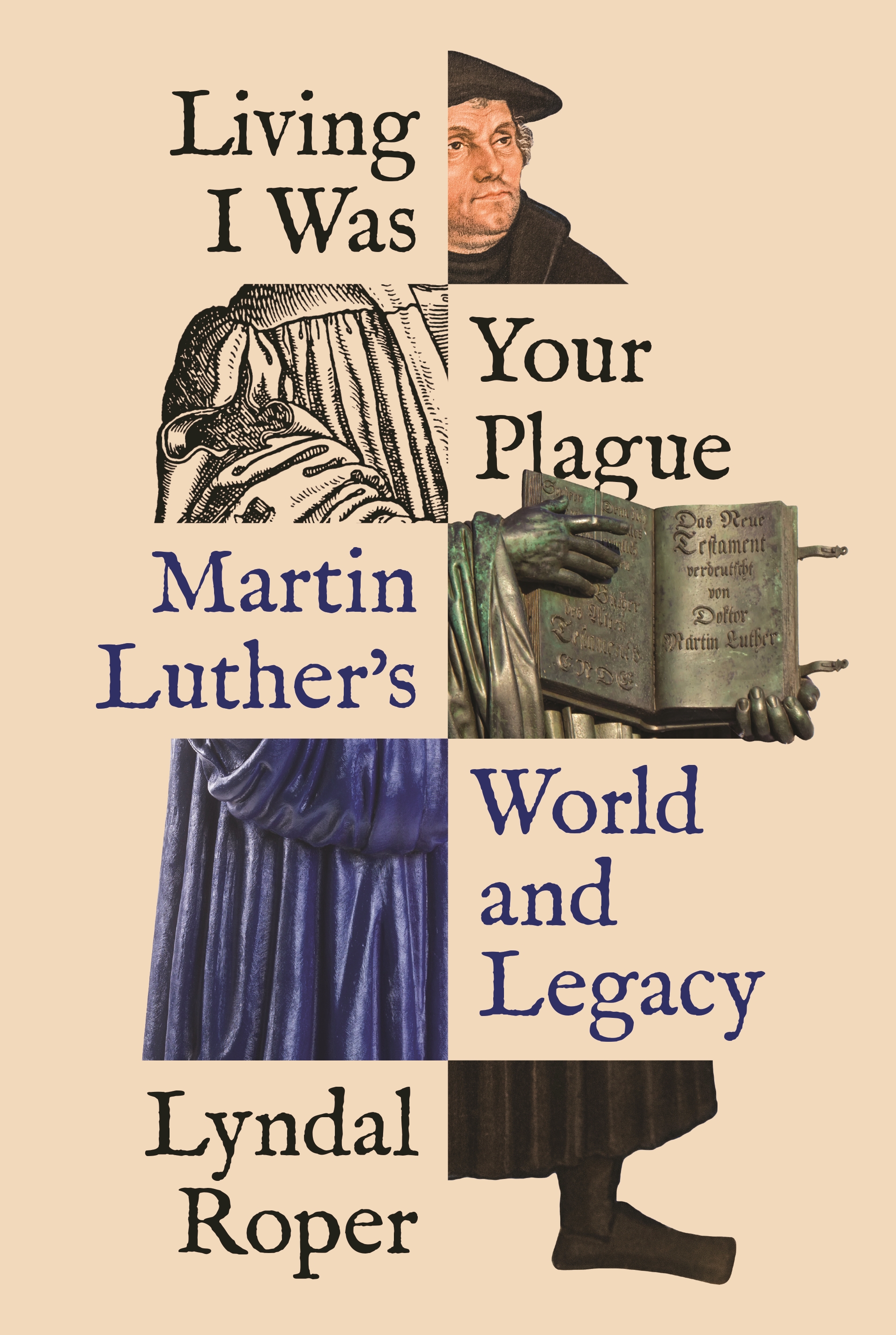 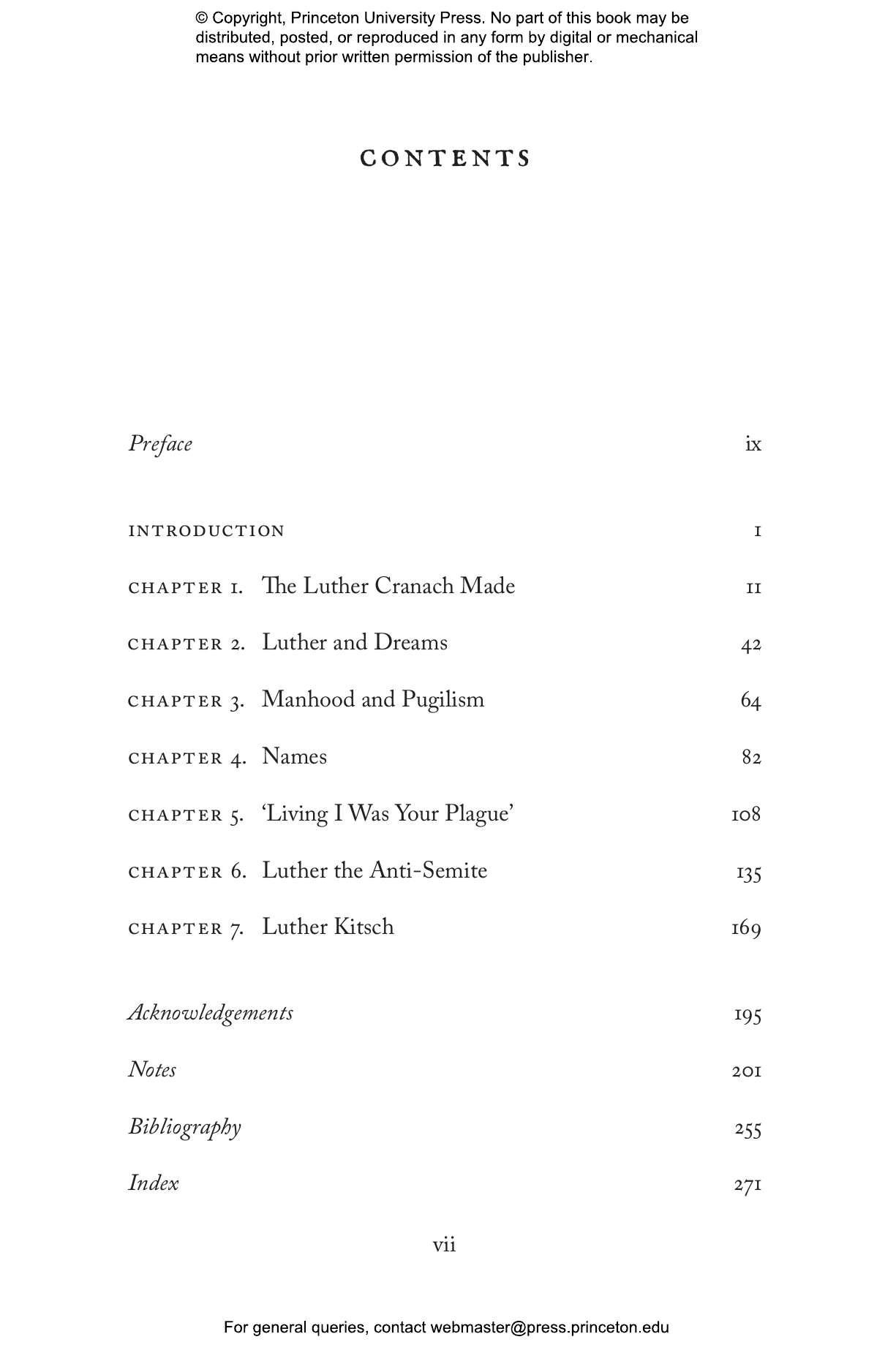 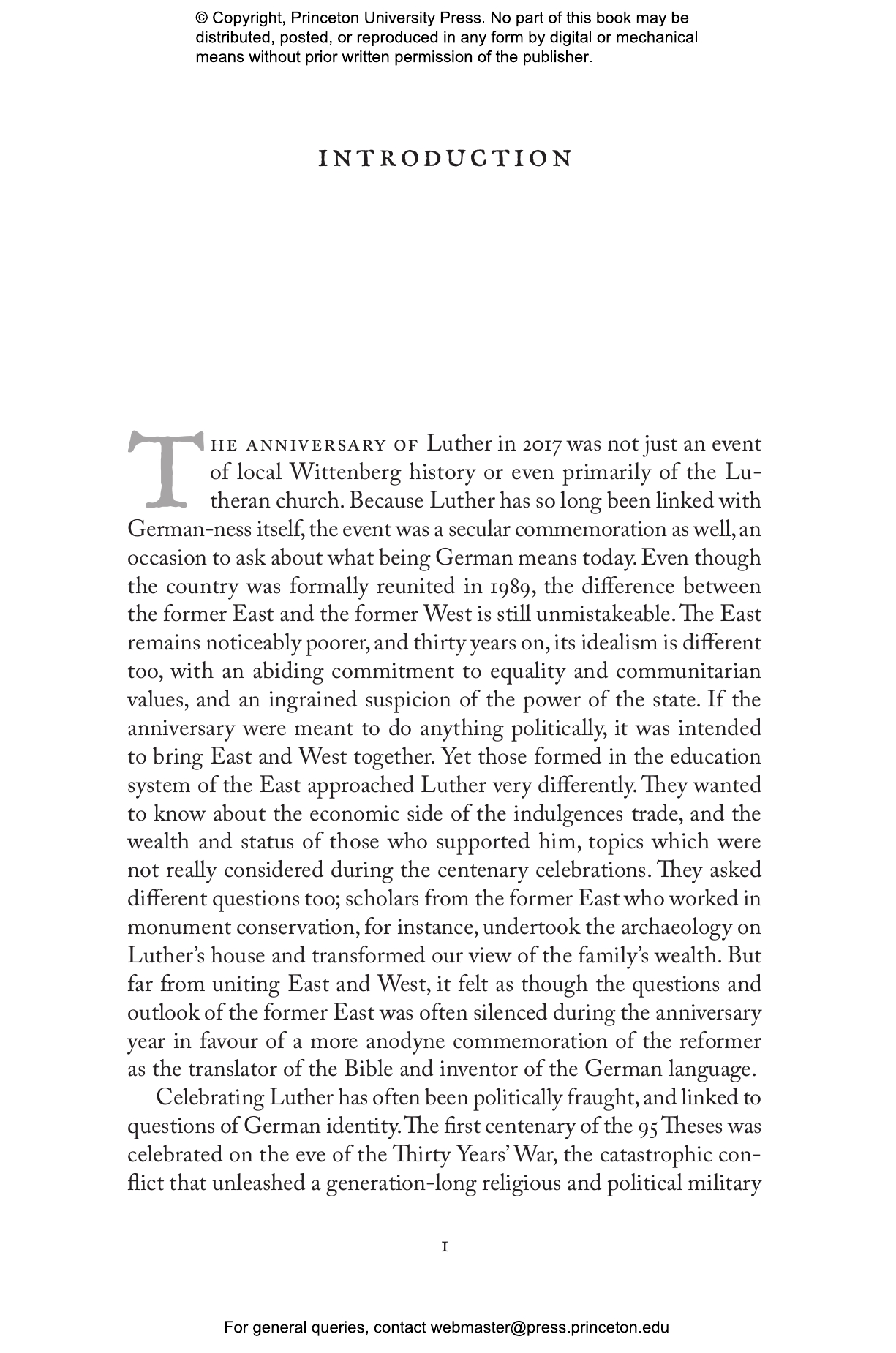 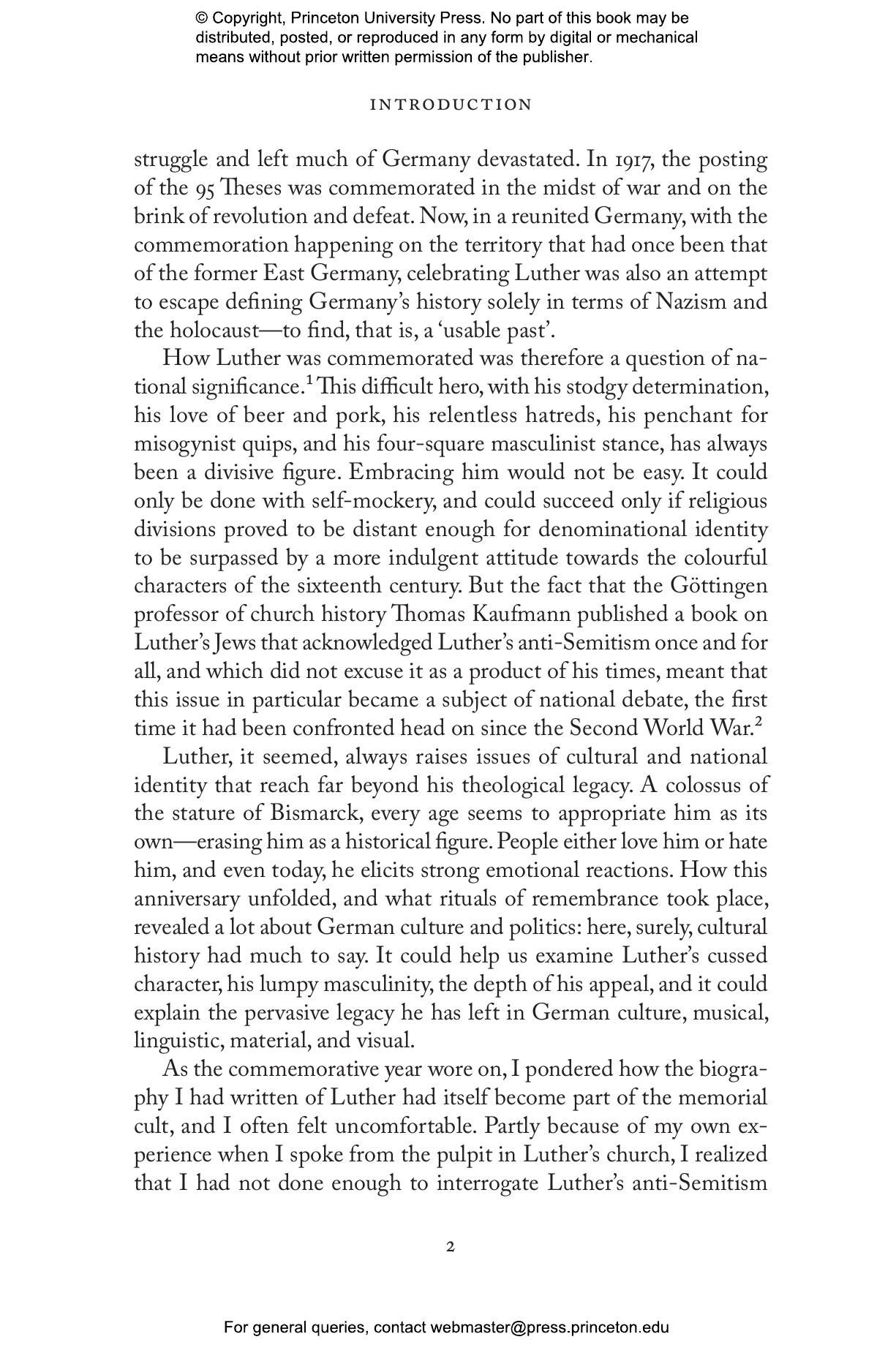 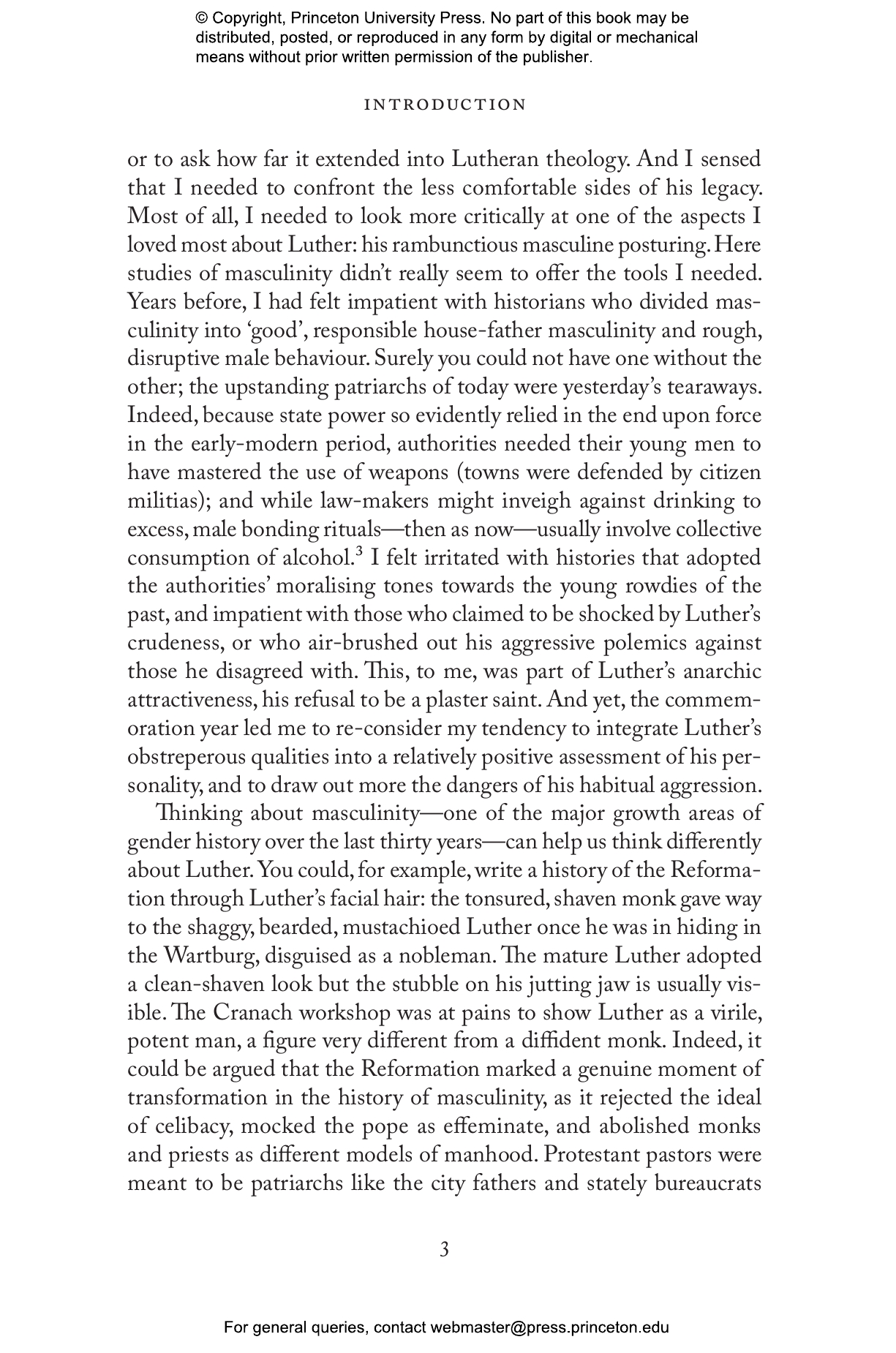 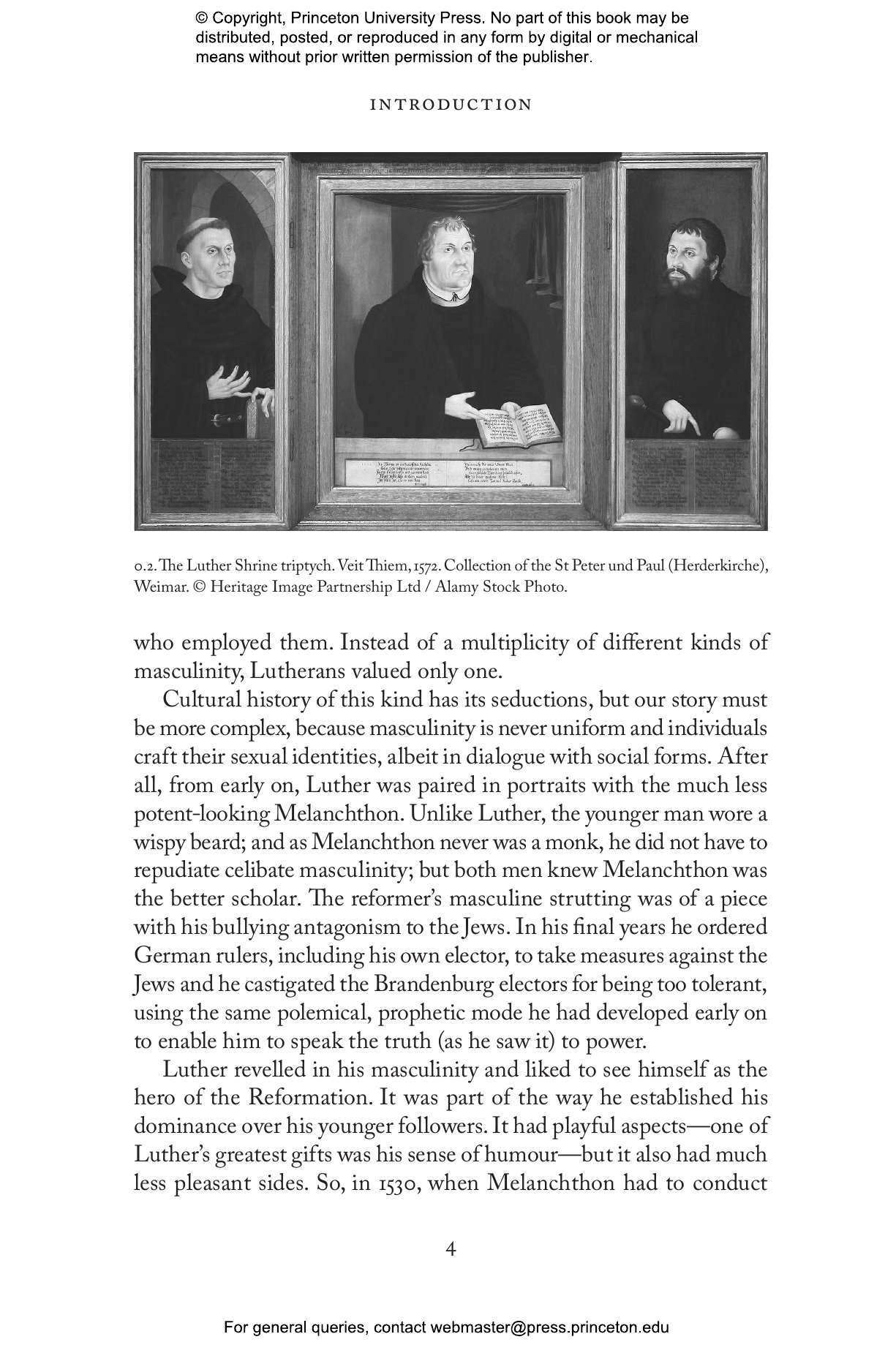 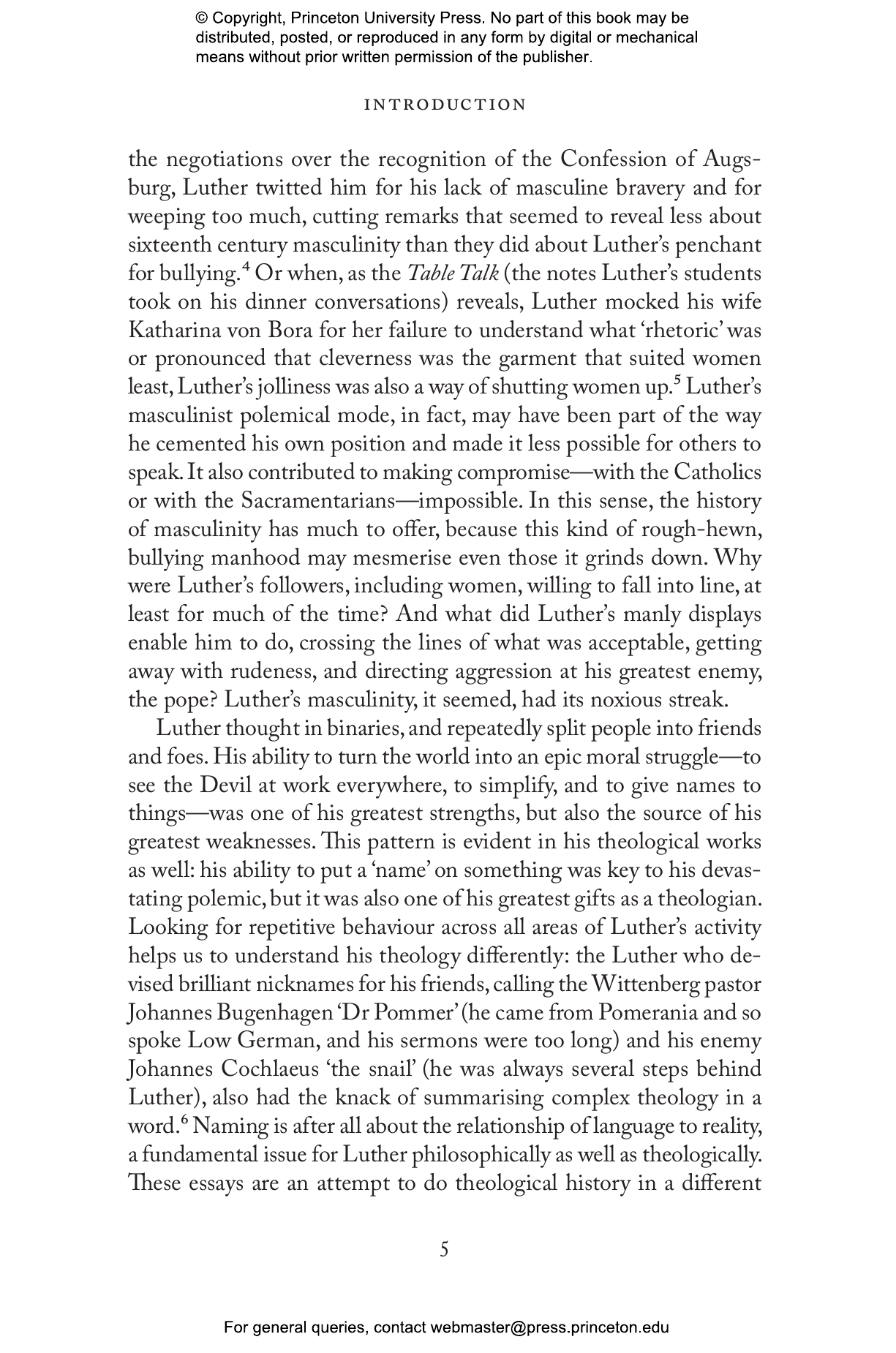 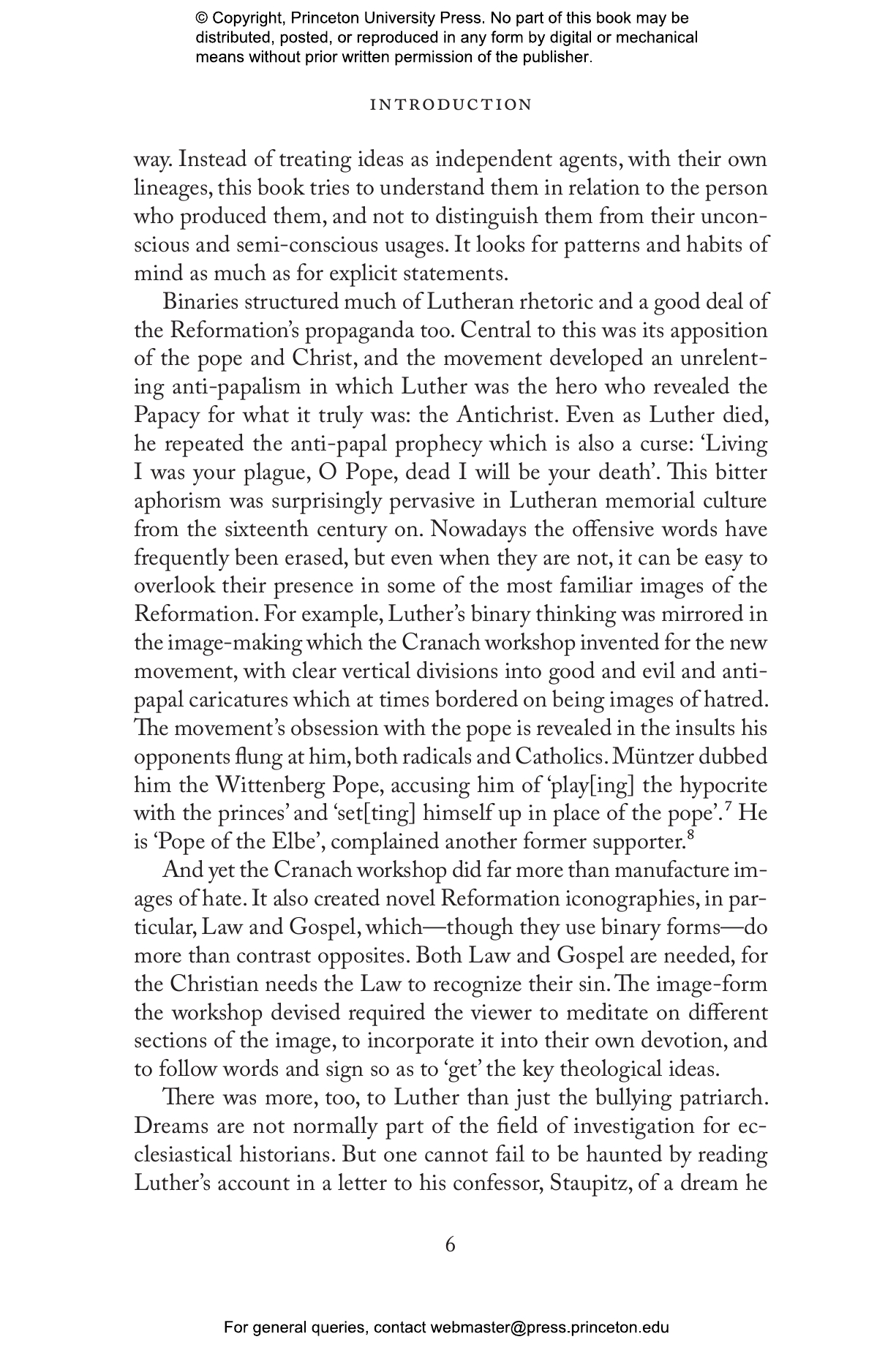 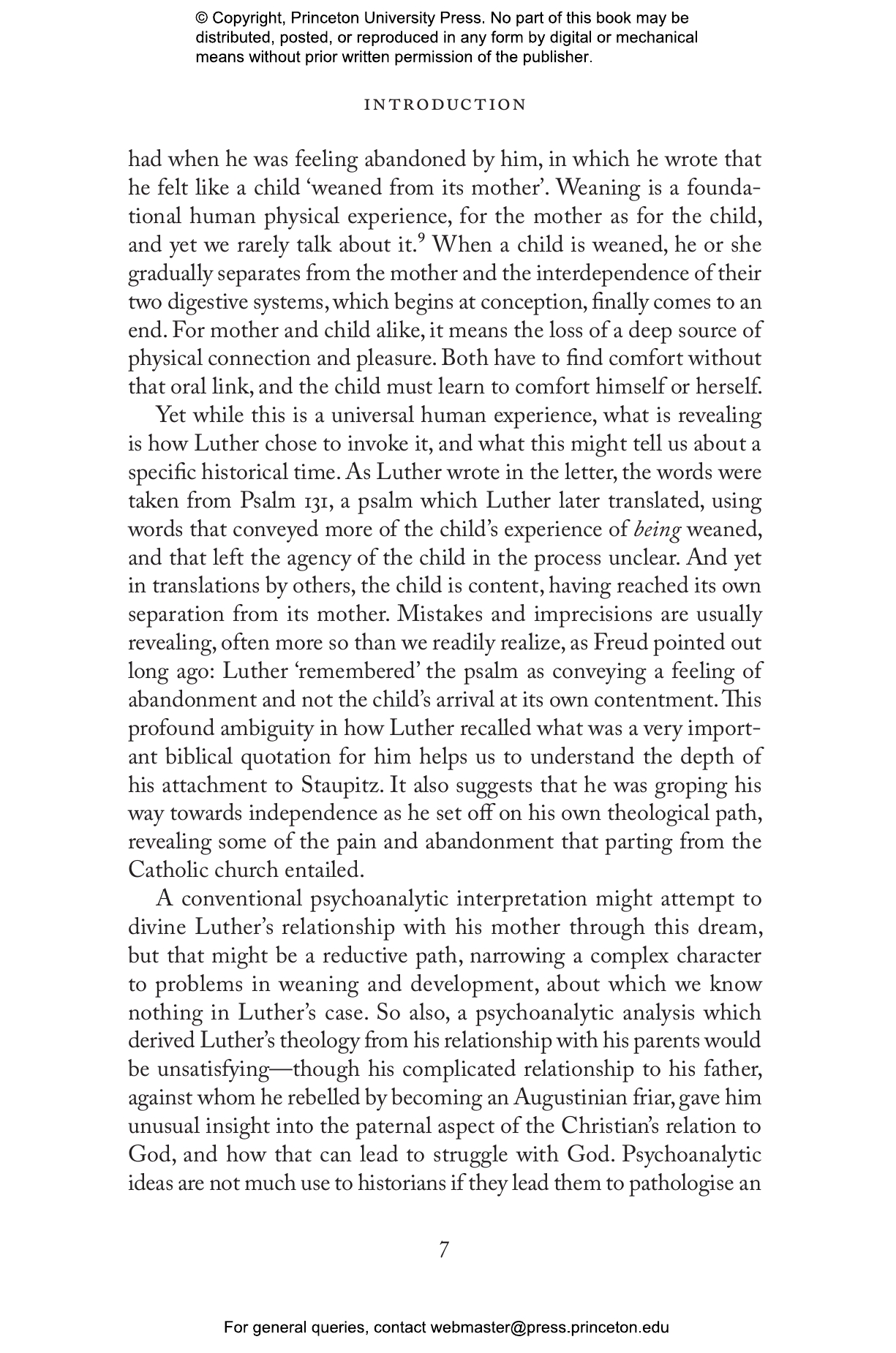 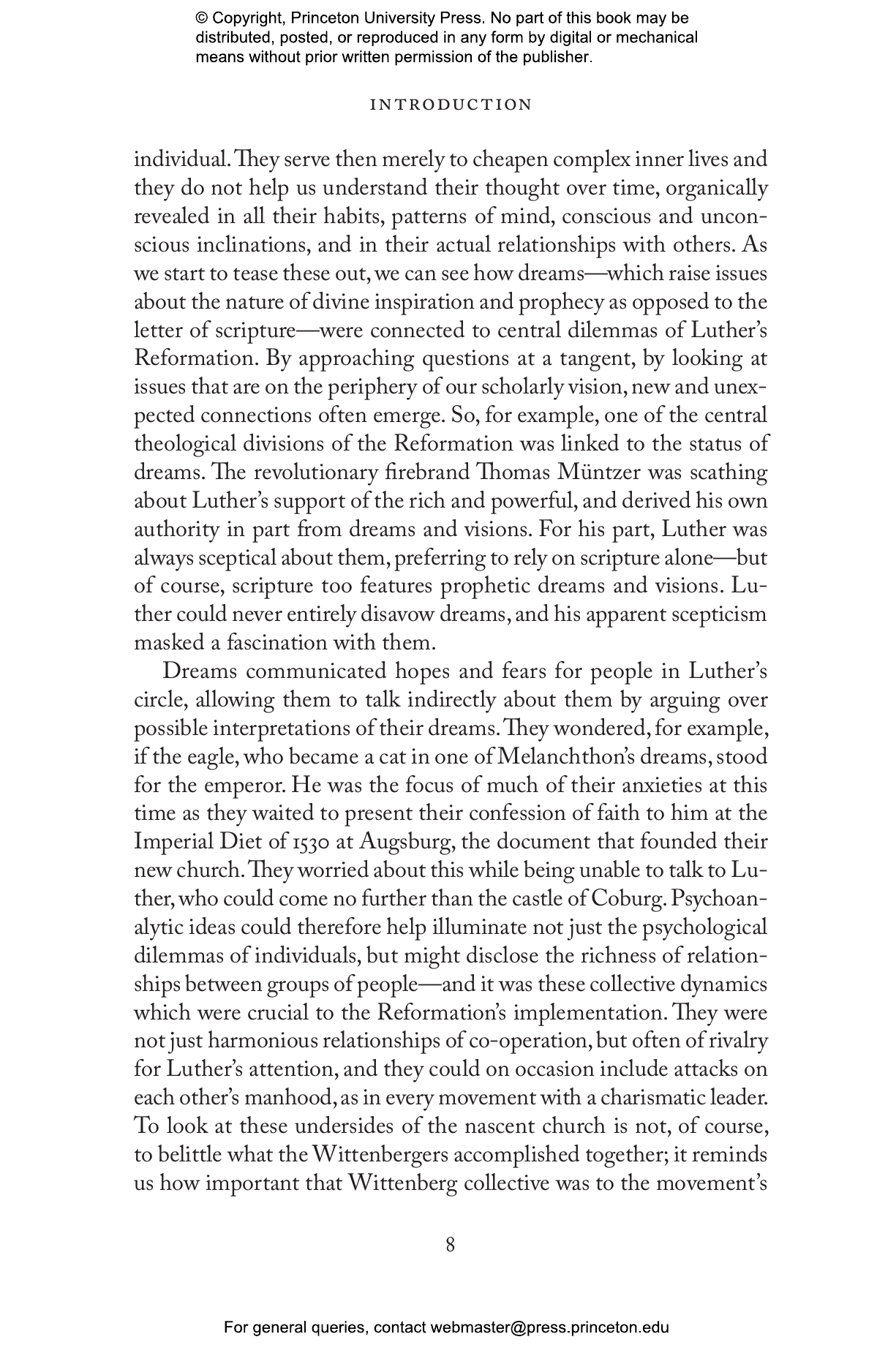 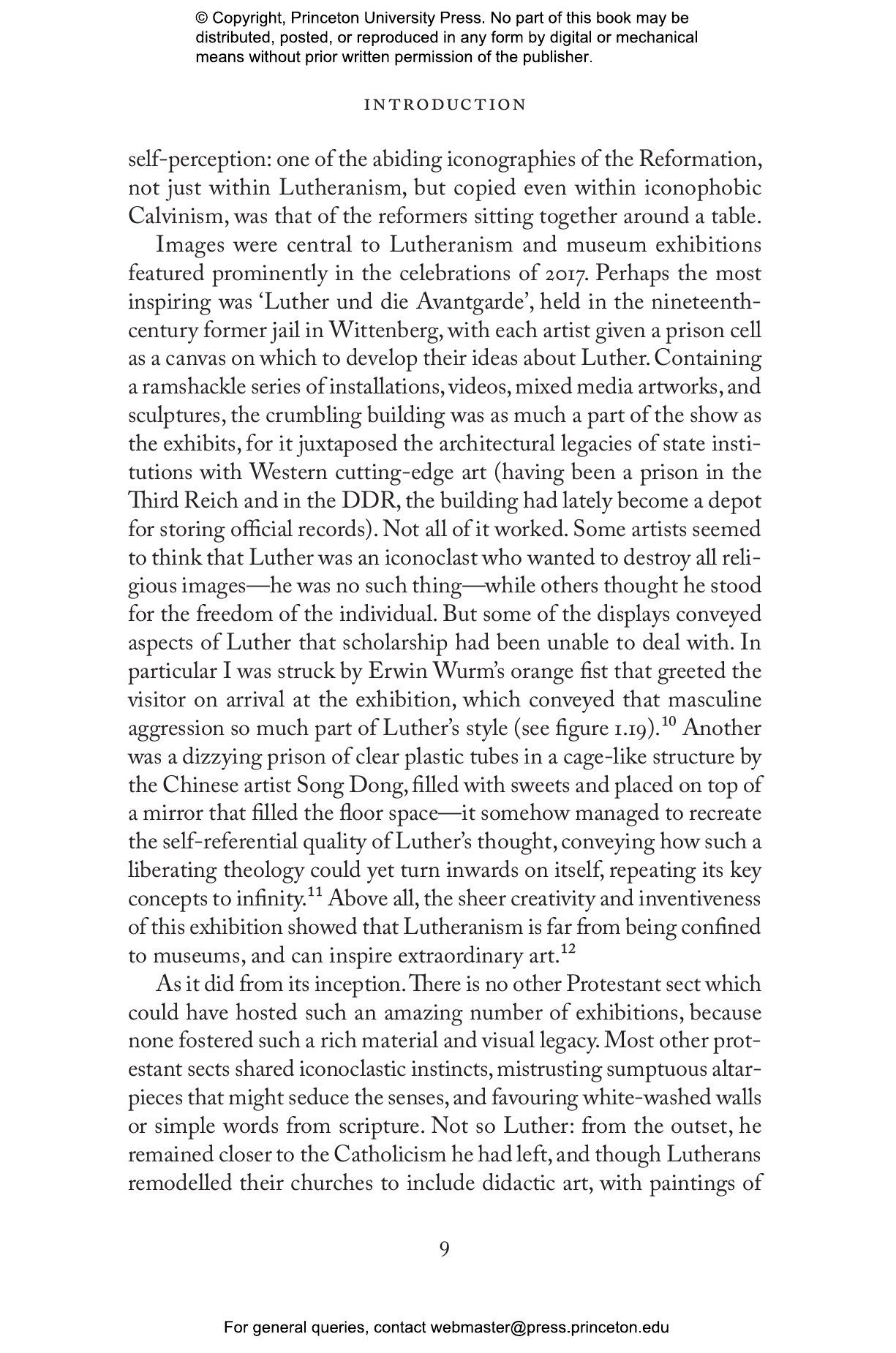 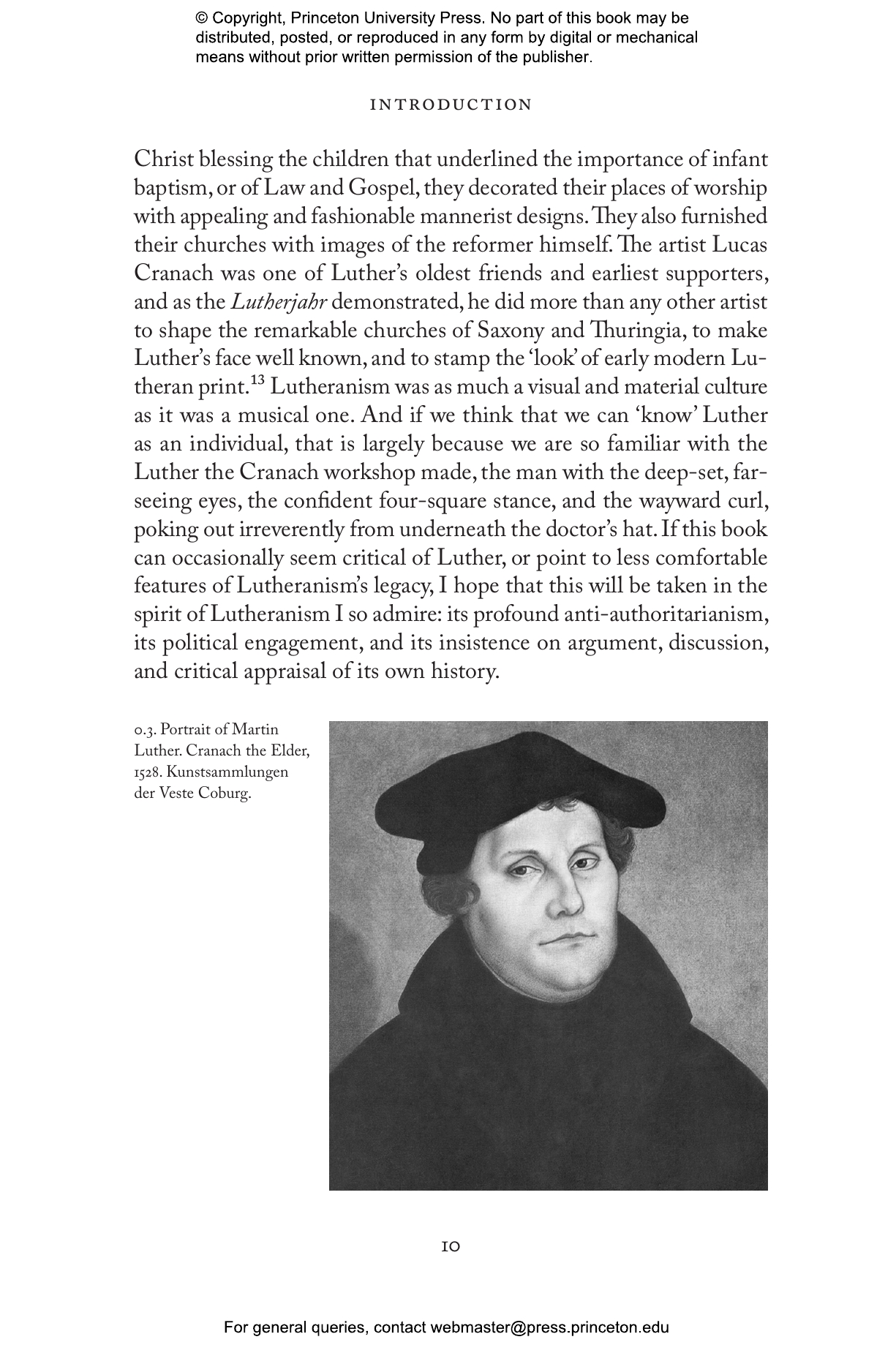 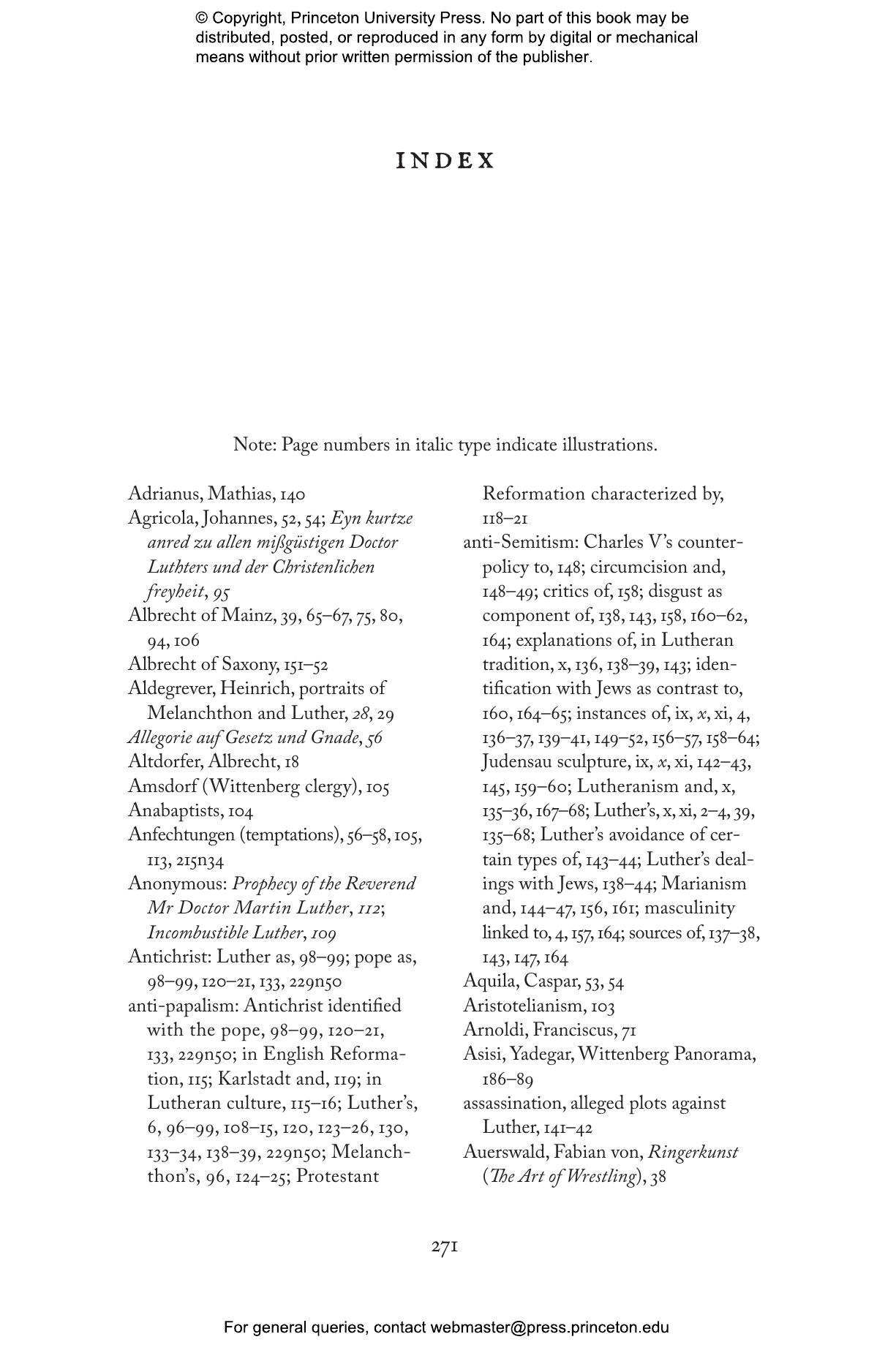 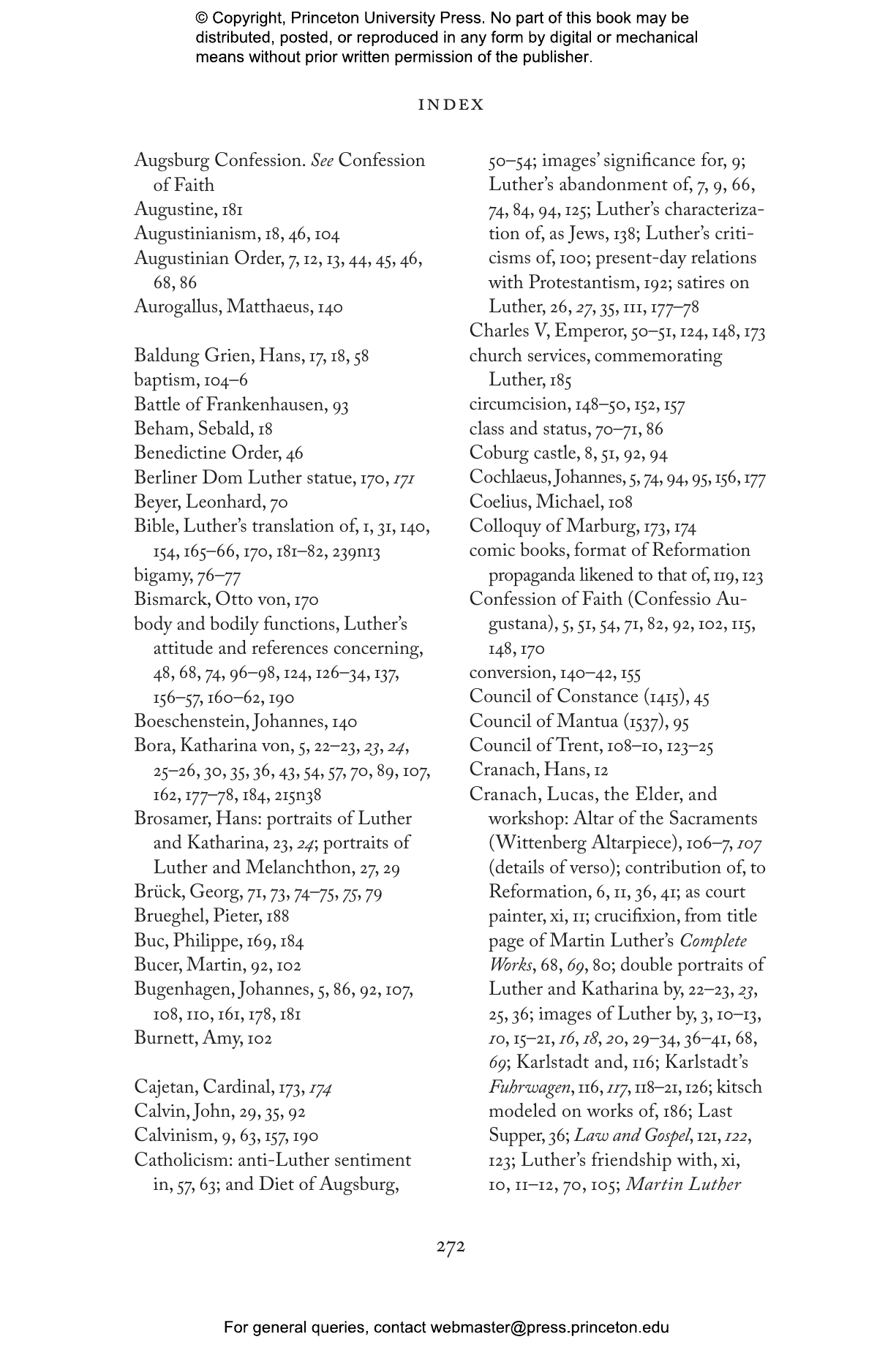 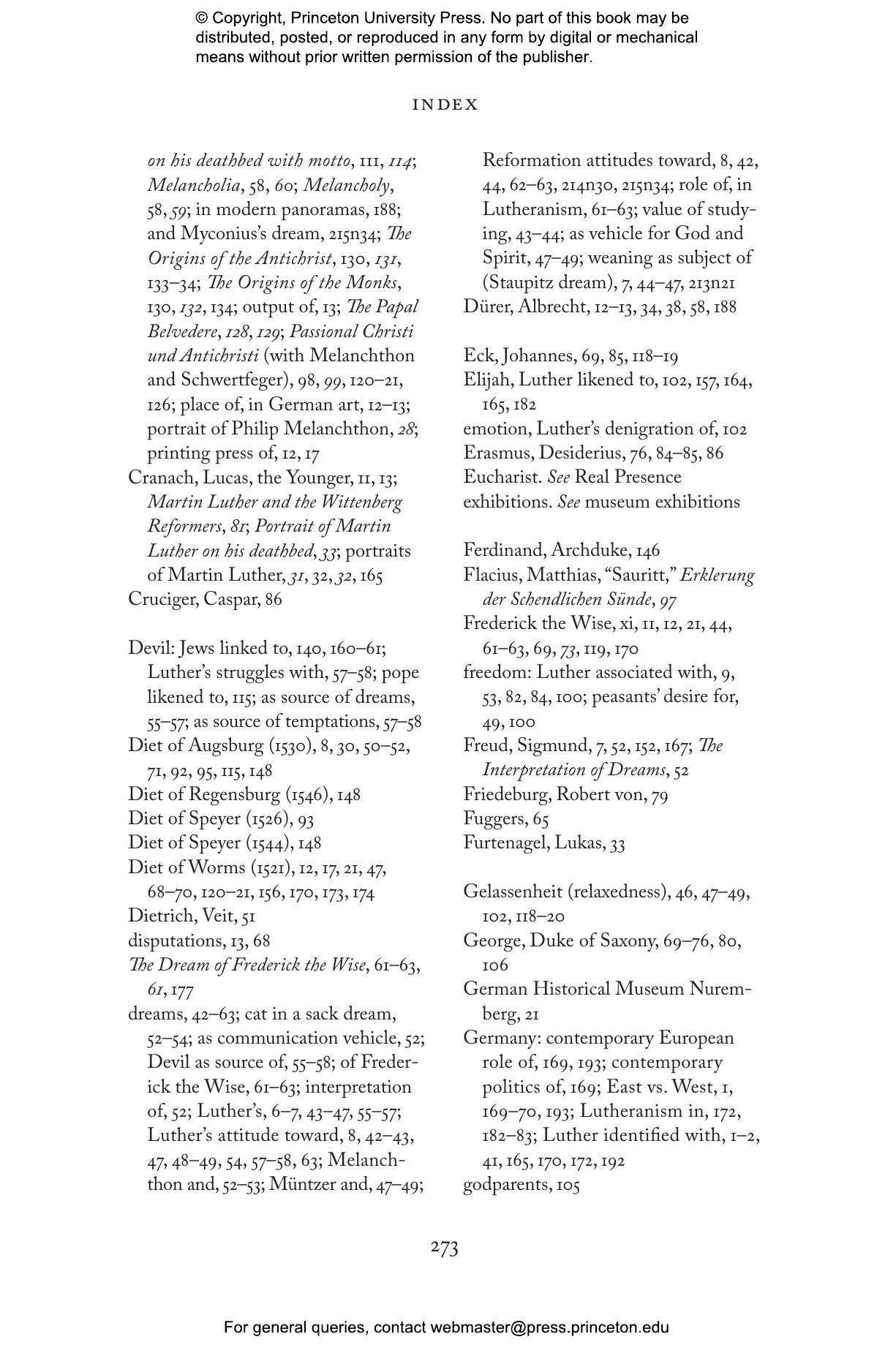 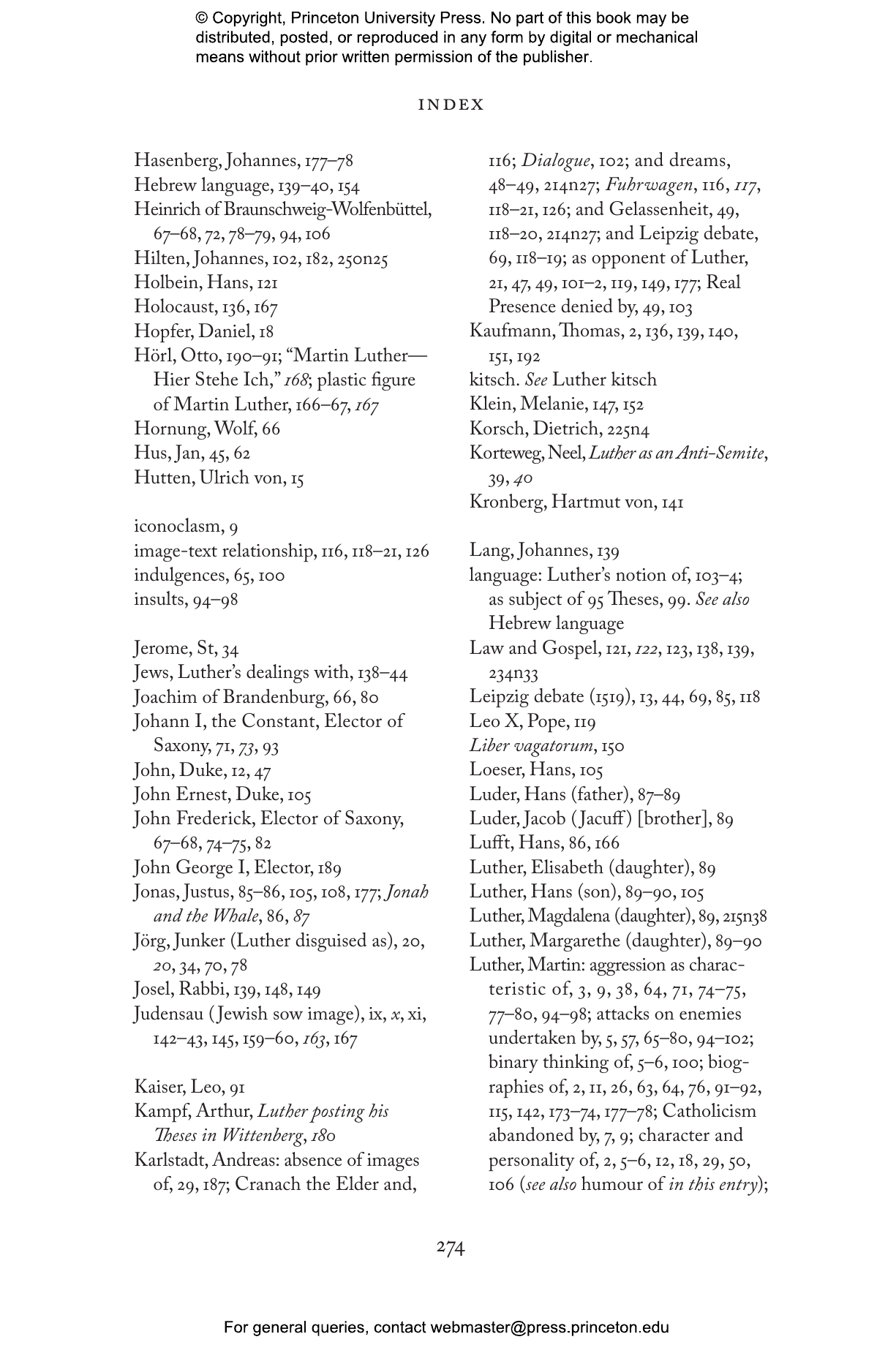 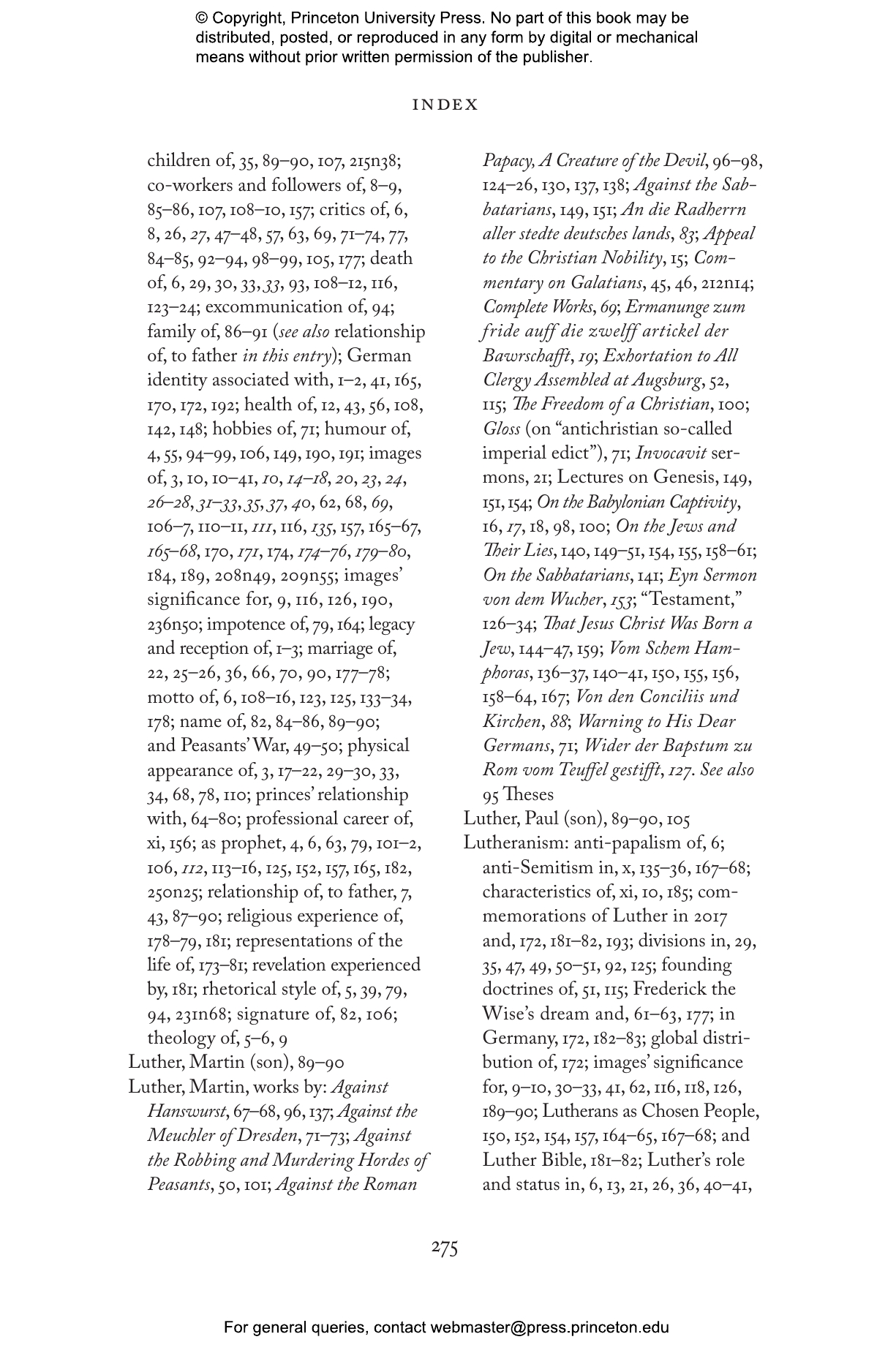 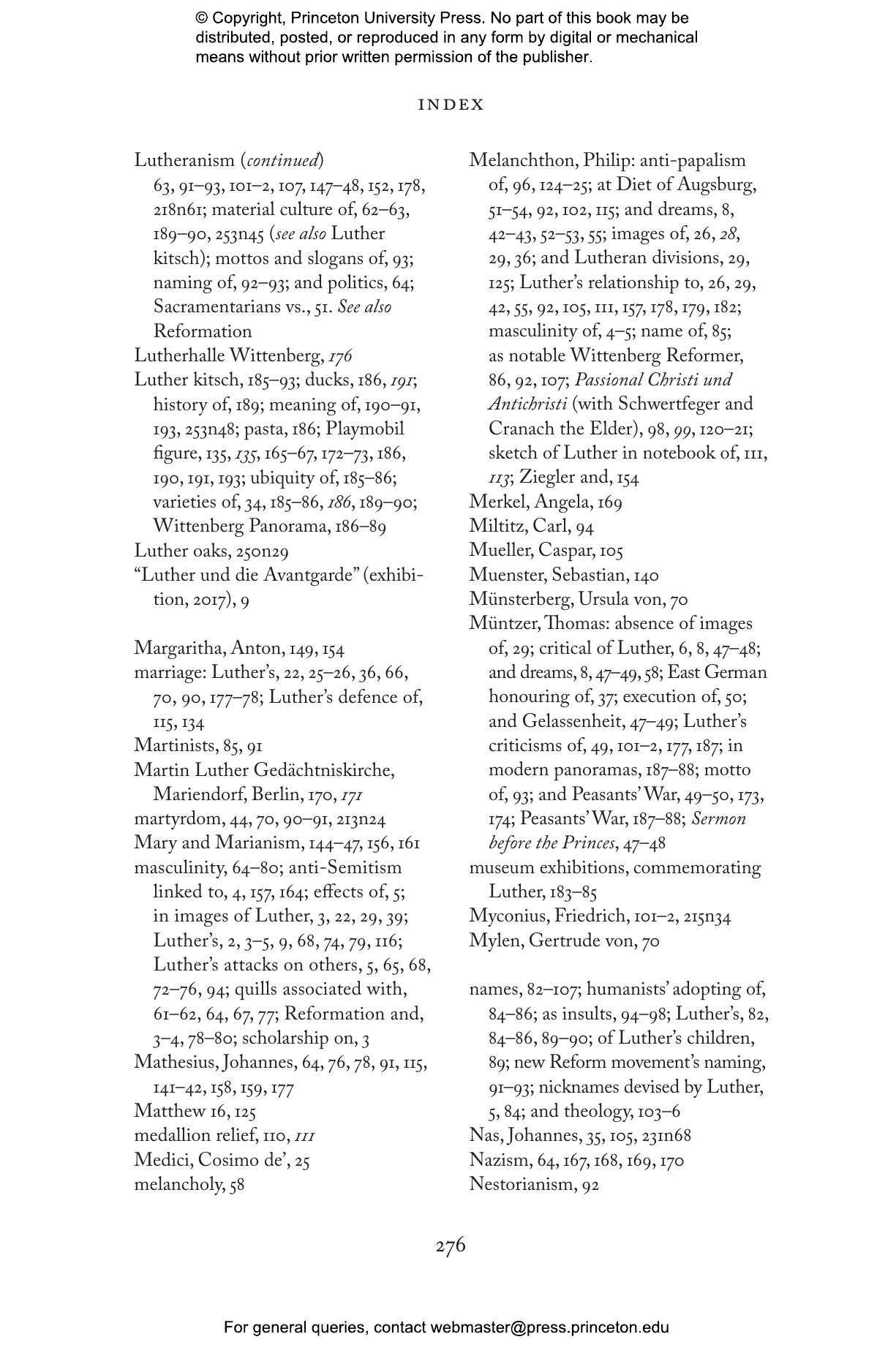 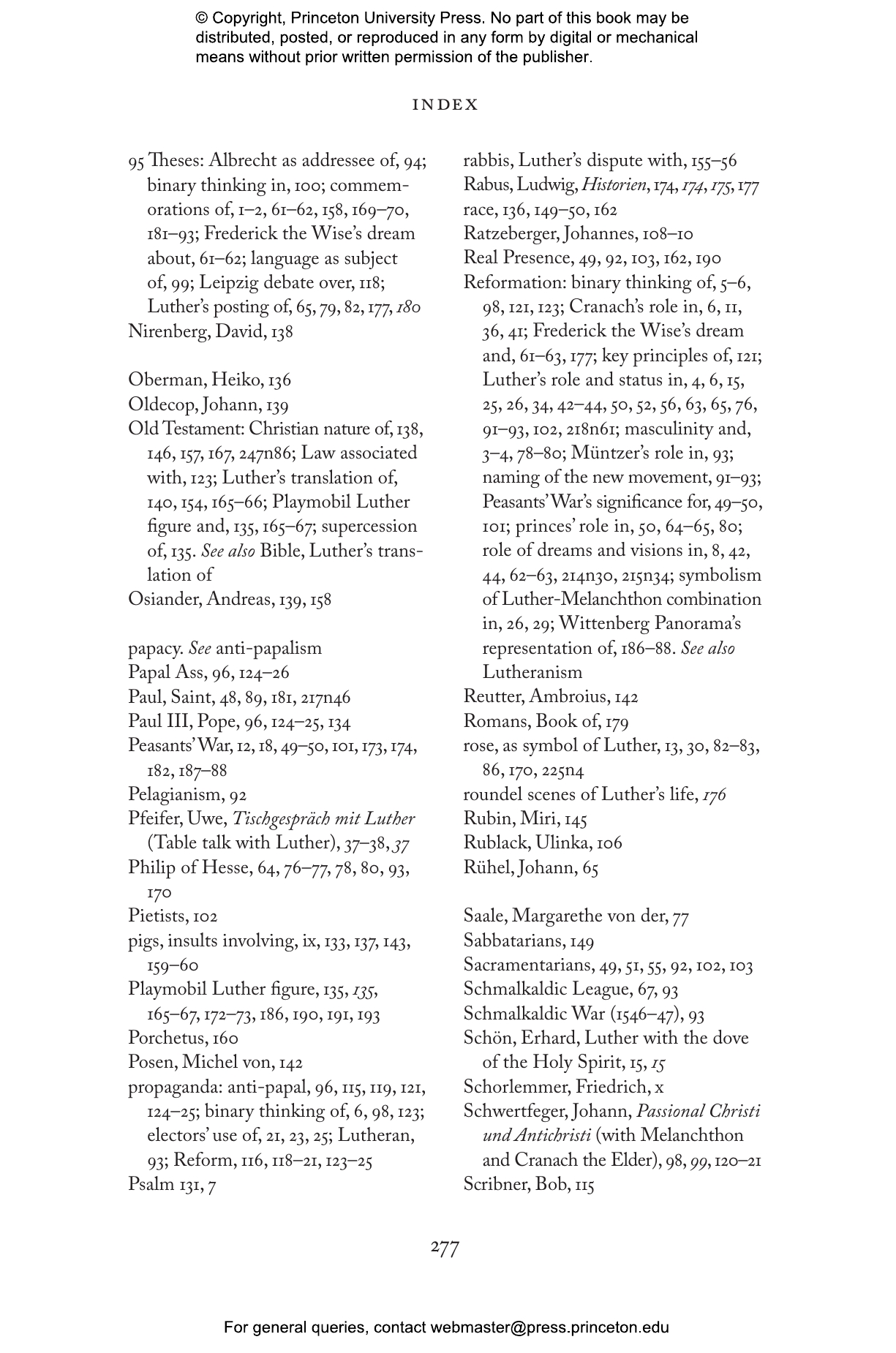 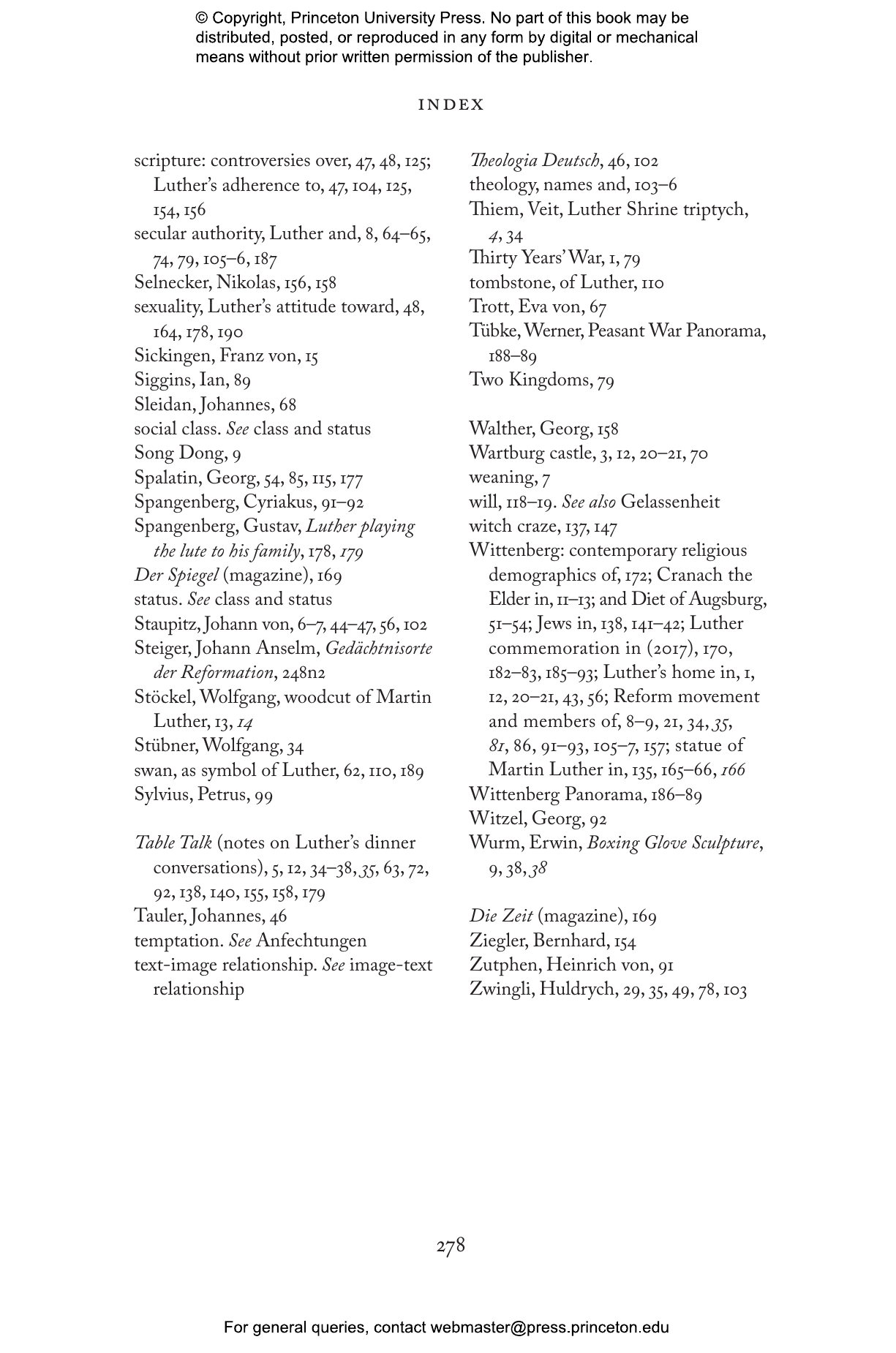 From the author of the acclaimed biography Martin Luther: Renegade and Prophet, new perspectives on how Luther and others crafted his larger-than-life image

Martin Luther was a controversial figure during his lifetime, eliciting strong emotions in friends and enemies alike, and his outsized persona has left an indelible mark on the world today. Living I Was Your Plague explores how Luther carefully crafted his own image and how he has been portrayed in his own times and ours, painting a unique portrait of the man who set in motion a revolution that sundered Western Christendom.

Renowned Luther biographer Lyndal Roper examines how the painter Lucas Cranach produced images that made the reformer an instantly recognizable character whose biography became part of Lutheran devotional culture. She reveals what Luther’s dreams have to say about his relationships and discusses how his masculinity was on the line in his devastatingly crude and often funny polemical attacks. Roper shows how Luther’s hostility to the papacy was unshaken to the day he died, how his deep-rooted anti-Semitism infused his theology, and how his memorialization has given rise to a remarkable flood of kitsch, from “Here I Stand” socks to Playmobil Luther.

Lavishly illustrated, Living I Was Your Plague is a splendid work of cultural history that sheds new light on the complex and enduring legacy of Luther and his image.

The world of Martin Luther

Lyndal Roper is the Regius Professor of History at the University of Oxford. Her books include Martin Luther: Renegade and Prophet (Random House) and Witch Craze: Terror and Fantasy in Baroque Germany. She lives in Oxford, England. 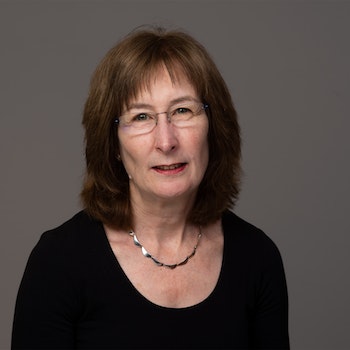 "Roper’s book proves that a rigorously scholarly work can also be a pleasure to read."—Dan Hitchens, The Times

"Roper questions Luther’s character and legacy with the same anti-authoritarianismthat animated her subject, combining acuity with wit and levity, just as Luther did— though with fewer obscenities."—Suzannah Lipscomb, A Financial Times Best Book Of The Week

"Provocative and thought-provoking, Living I Was Your Plague is an important contribution to our understanding of the life and afterlife of one of history’s most complex figures, and a lively testament to the striking originality of Roper’s scholarship."—Alexandra Walsham, Times Literary Supplement

"Through its thematic approach this collection says much that could not be said in the inevitably heroic format of the biography. It provides insights that will shape the reader’s experience of every future encounter with Luther. It integrates visual and material culture brilliantly throughout, arguing that from Cranach’s early portraits to Playmobil’s bestselling Luther figurine, images must be central to our interpretation of the Reformation. And it offers a critical reflection – wonderfully personal in places – on the experience of writing biography and living as a historian through a period of intense public interest. At a moment at which tensions over race and heritage have coalesced around public representations of historical men this collection provides a moral compass for those seeking to write the histories of heroes with dark sides."—Bridget Heal, History Today

"After an outpouring of books about Luther at the time of the quicentenary, one could have been forgiven for thinking. . . that there wasn't much of interest left to be said. In her ambition to tackle together the life and the legend, and her avowed determination to appraise Luther in a thorougly Lutheran spirit of anti-authoritarianism, Lyndal Roper has triumphantly demonstrated the contrary."—Peter Marshall, The Tablet

"[Living I Was Your Plague] may unsettle in ways that open diligent readers to new vision. The book accomplishes something that few of the books about Luther occasioned by the 2017 anniversary accomplished: it sees Luther with fresh eyes and shows us why we need to wrestle with his legacy."—Vincent Evener, Christian Century

"Roper questions Luther’s character and legacy with the same anti-authoritarianism that animated her subject, combining acuity with wit and levity, just as Luther did — though with fewer obscenities. But it is those obscenities that Roper, Regius Professor of History at the University of Oxford, has in mind, as she grapples with how to understand an intellectual in the context of their whole self, conscious and unconscious, warts and all."—Suzannah Lipscomb, Financial Times

"Intelligent and absorbing"—Sean Sheehan, The Prisma

"Lively and engaging. Roper's scholarship is of the very highest caliber, and her writing is crisp and eloquent. Living I Was Your Plague is full of brilliant insights."—Joel F. Harrington, author of Dangerous Mystic: Meister Eckhart's Path to the God Within

"Lyndal Roper focuses on topics that have been neglected until now, from Luther's masculinity and dreams to his binary thinking and the role of images in Lutheranism. The work of an eminent and creative historian, Living I Was Your Plague demonstrates that Luther is anything but boring."—Thomas Kaufmann, University of Göttingen

"Another book on Luther? The analytic exuberance of this stunning, inspiring, and deeply engaging cultural history will inevitably both inform and delight the reader."—Helmut Puff, author of Sodomy in Reformation Germany and Switzerland, 1400–1600

"With trenchant analysis of words and images, Roper tackles disturbing aspects of Luther's legacy, from his vicious hatred of the pope and of Jews to his strutting, bullying masculinity. She skillfully interweaves these with explorations of the artists, followers, fans, and critics who have shaped his long shadow, from the mythmakers of his own day to the purveyors of Luther-themed socks and snow globes today."—Merry E. Wiesner-Hanks, author of A Concise History of the World

"Roper's absorbing book takes us deep into Luther's psyche and across German history to engage with our own questions about overbearing leaders, religious strife, and cultures of masculinity. Her brilliance shines through on every page as she demonstrates the connections between Luther's emotional and intellectual preoccupations and our struggles with how to confront his legacy today. This is a book of breathtaking insight."—Ulinka Rublack, author of The Astronomer and the Witch