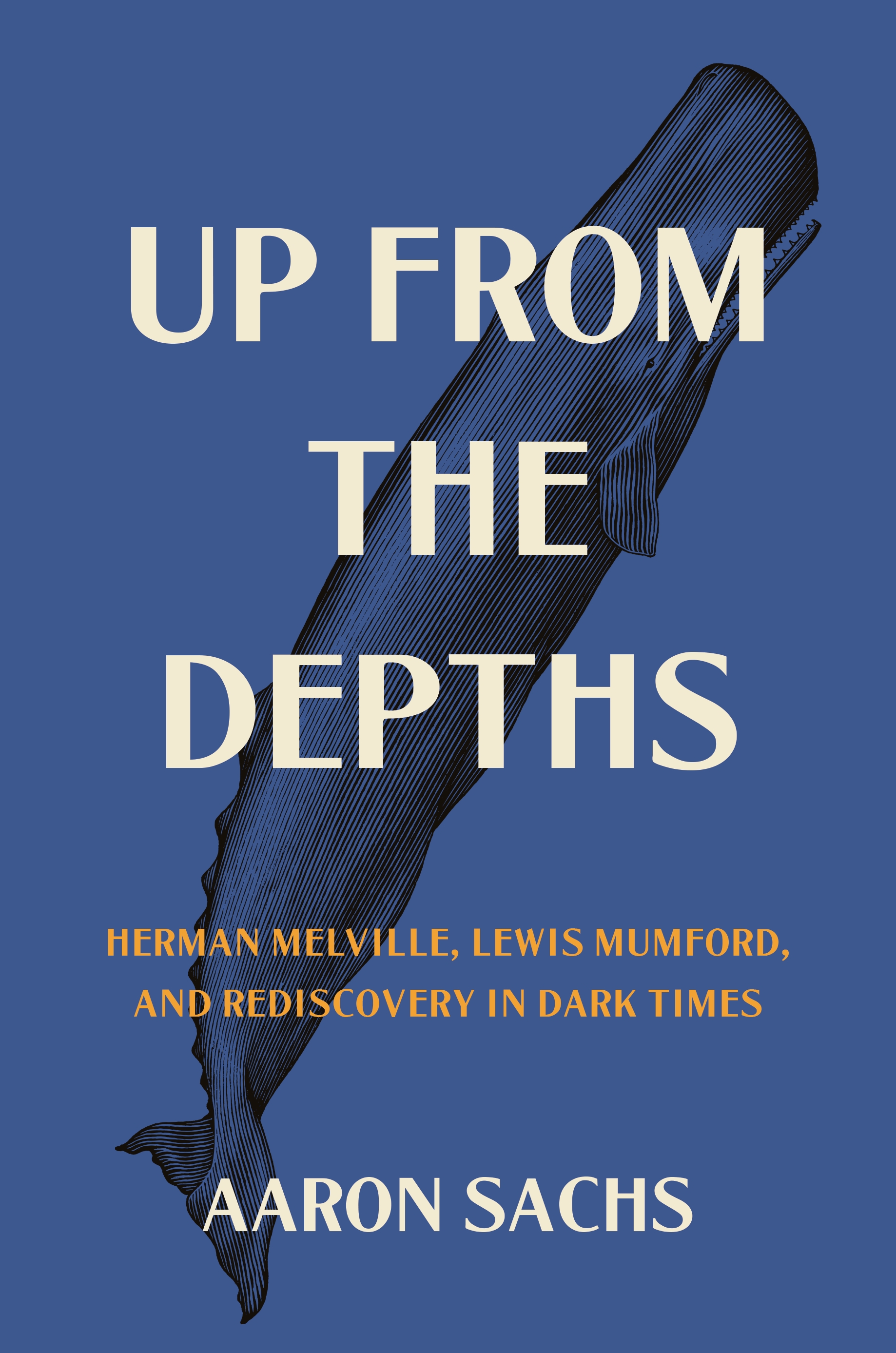 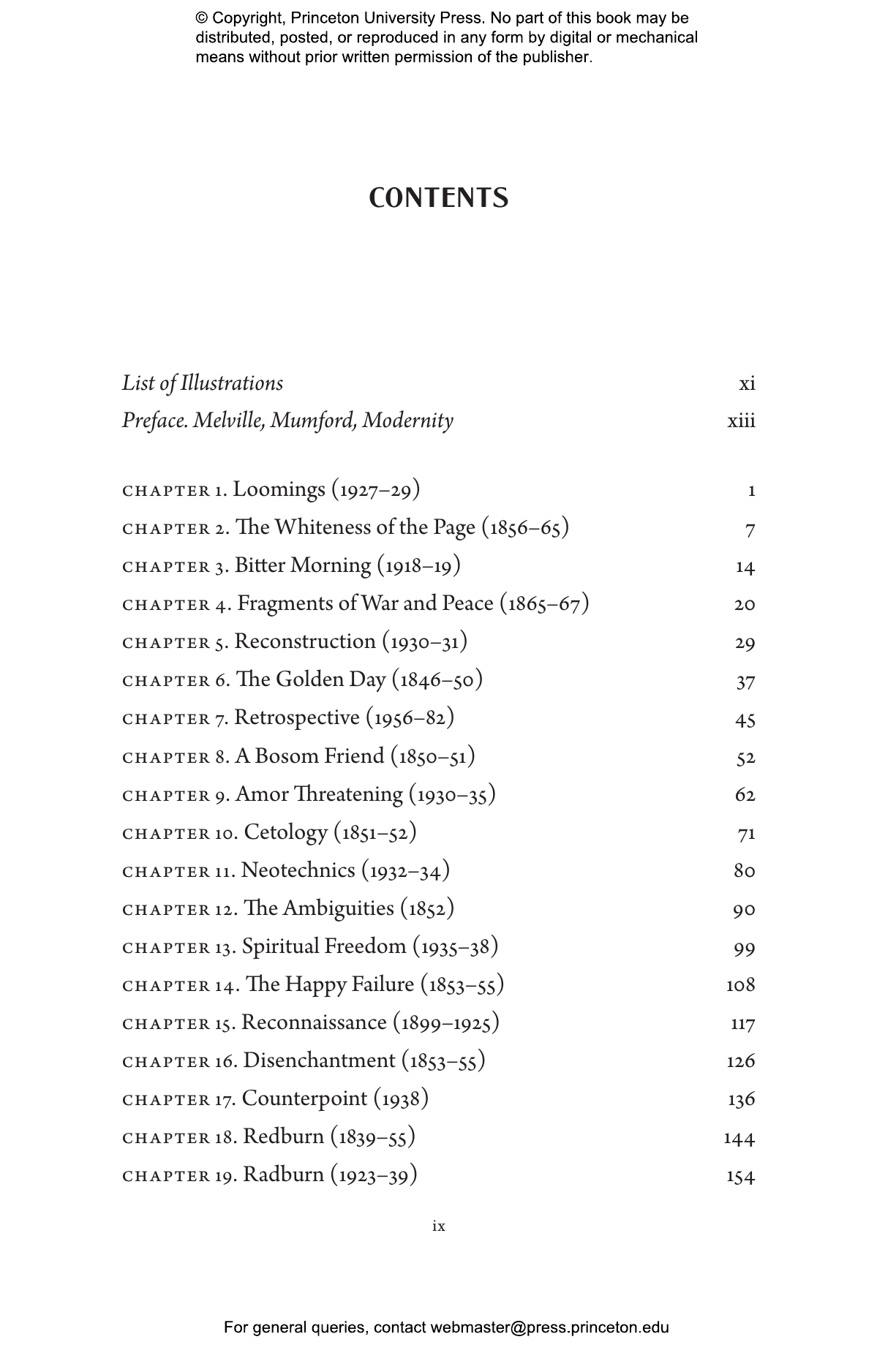 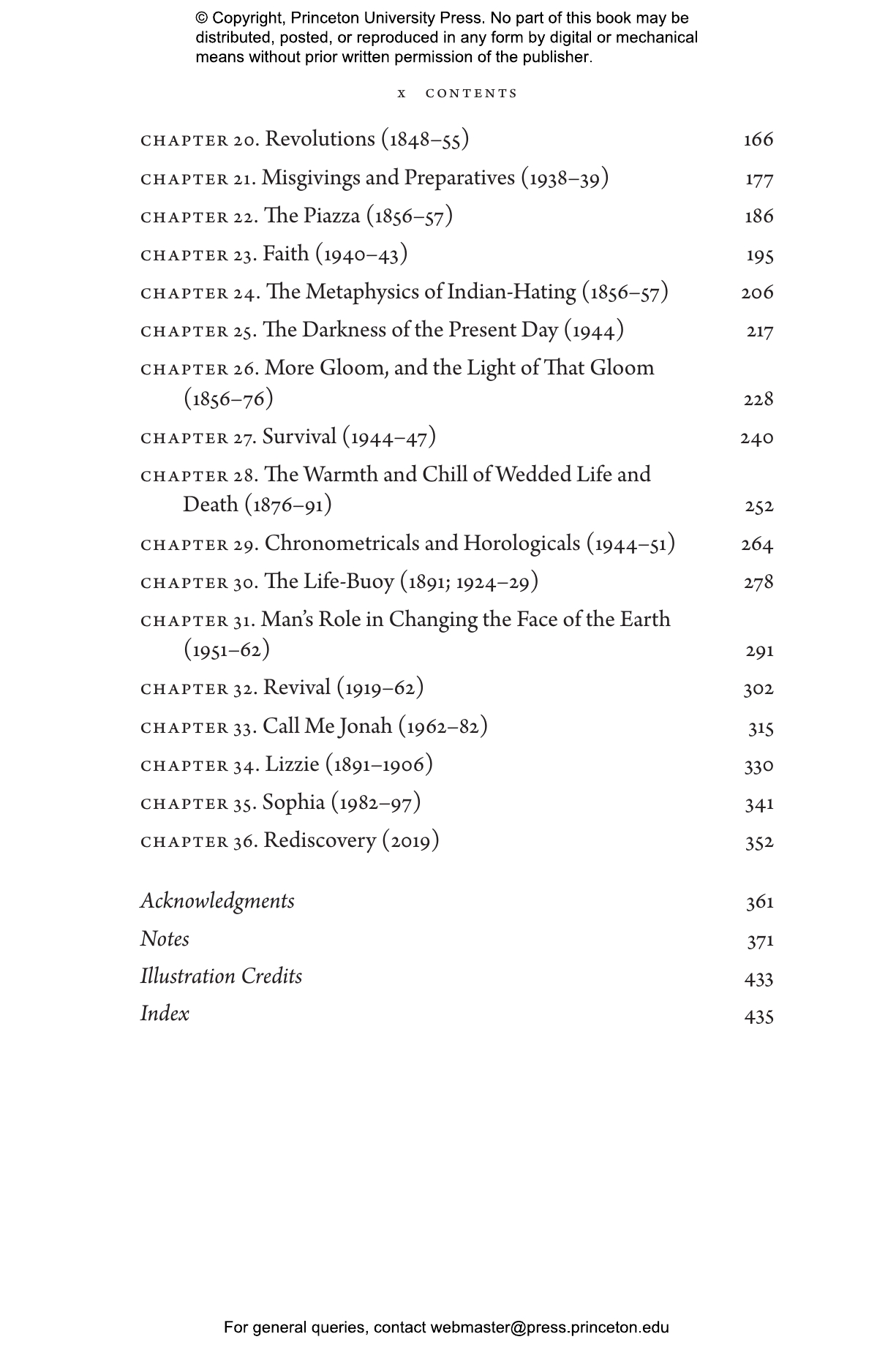 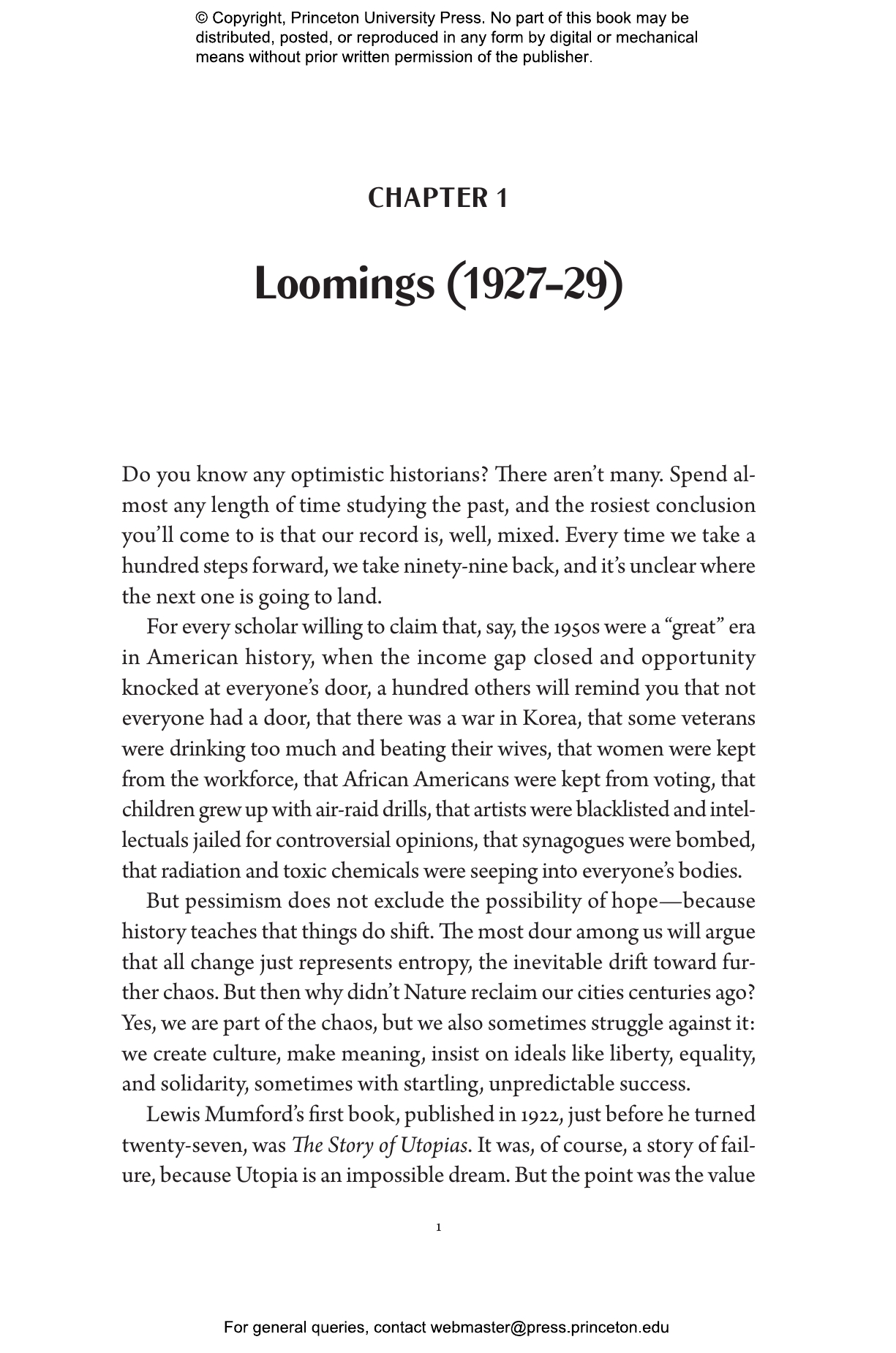 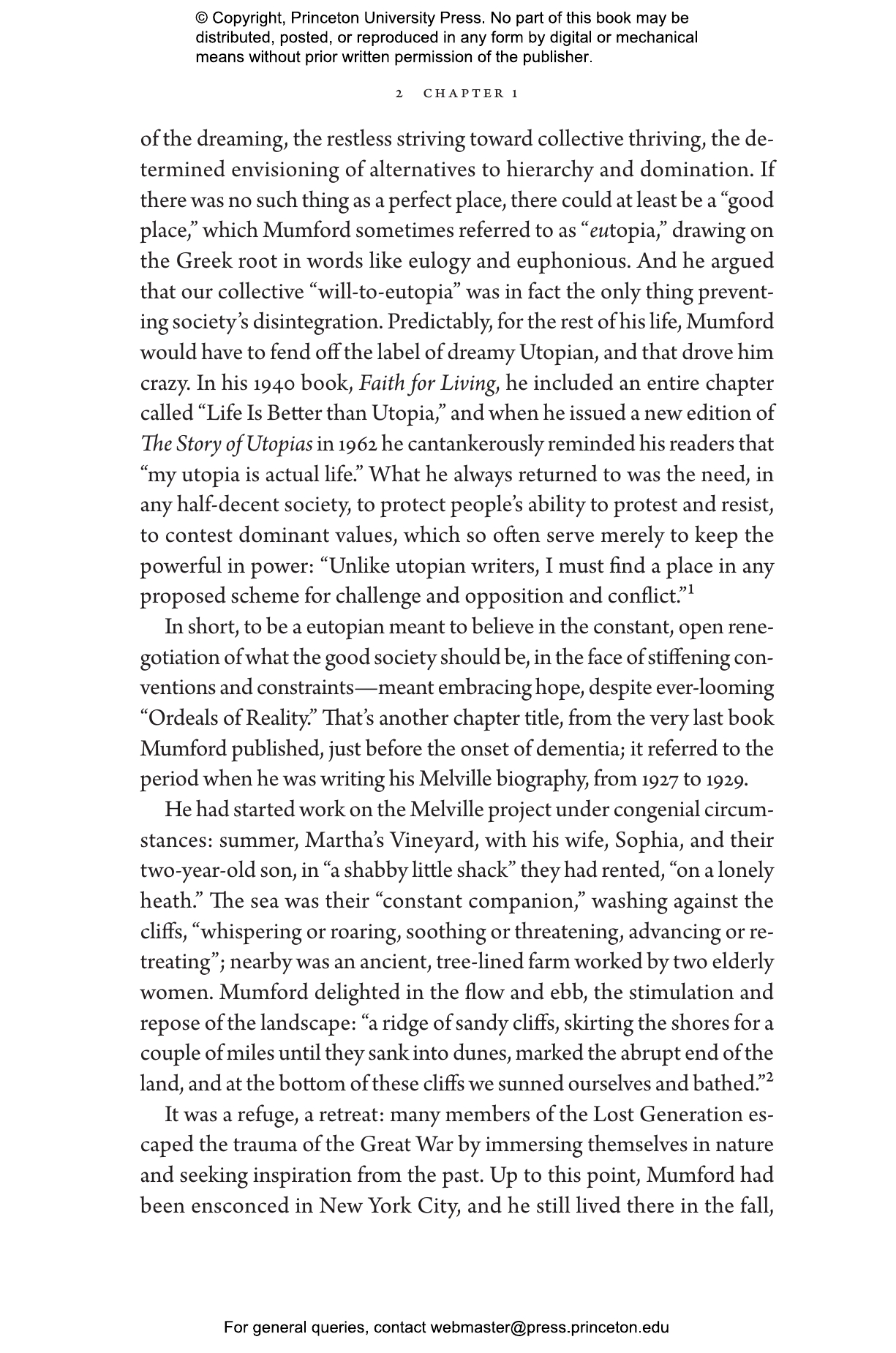 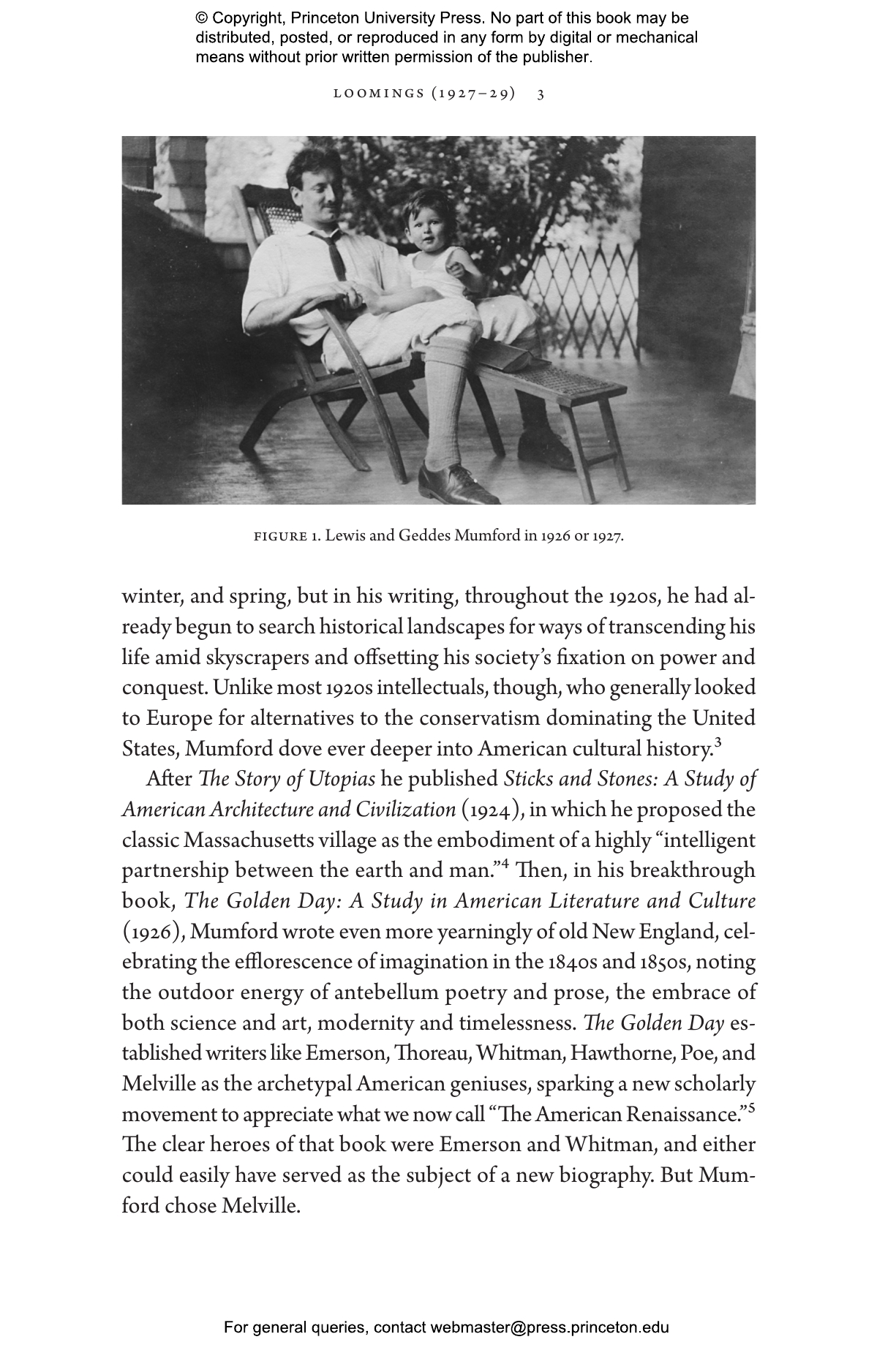 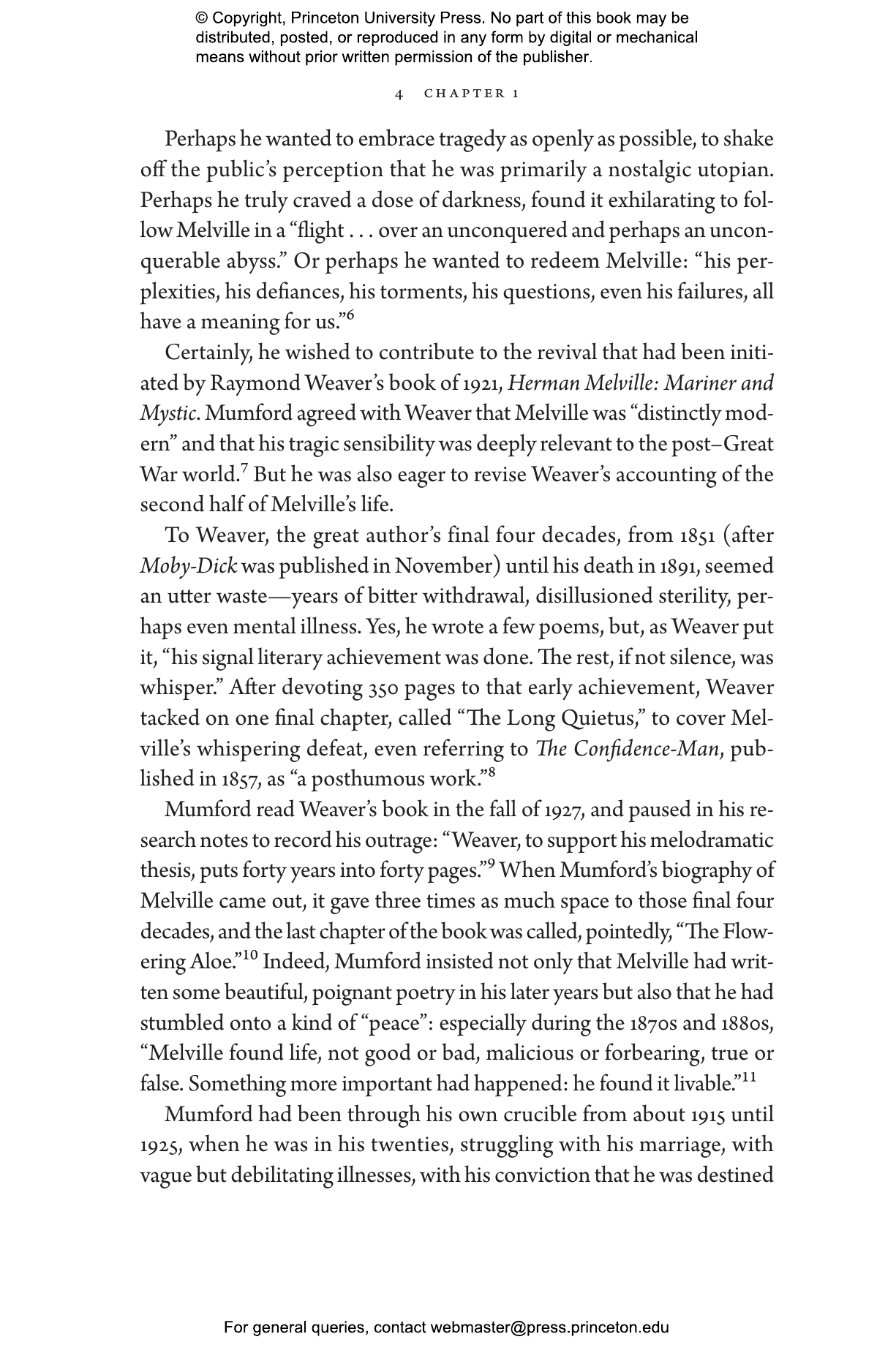 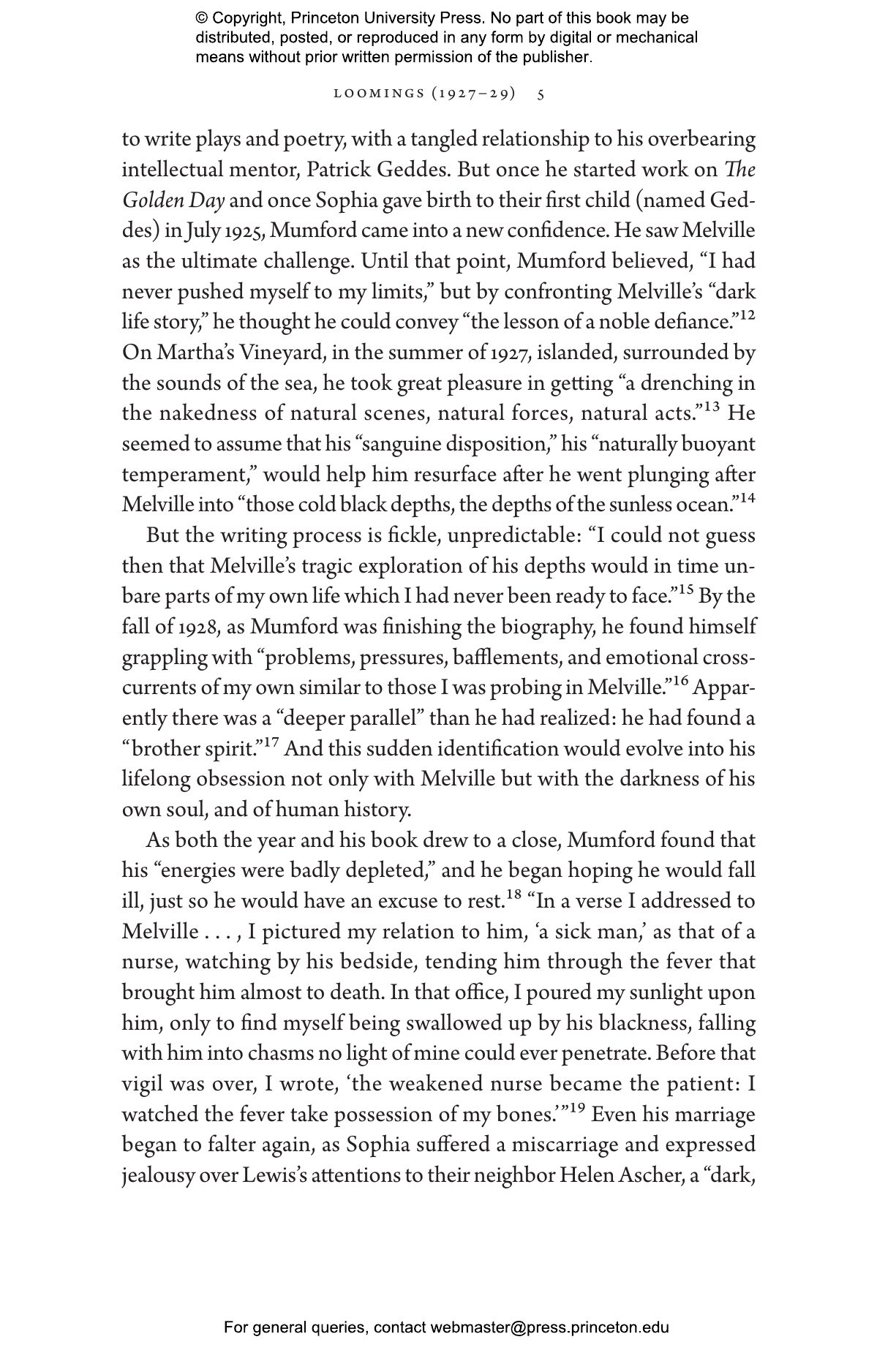 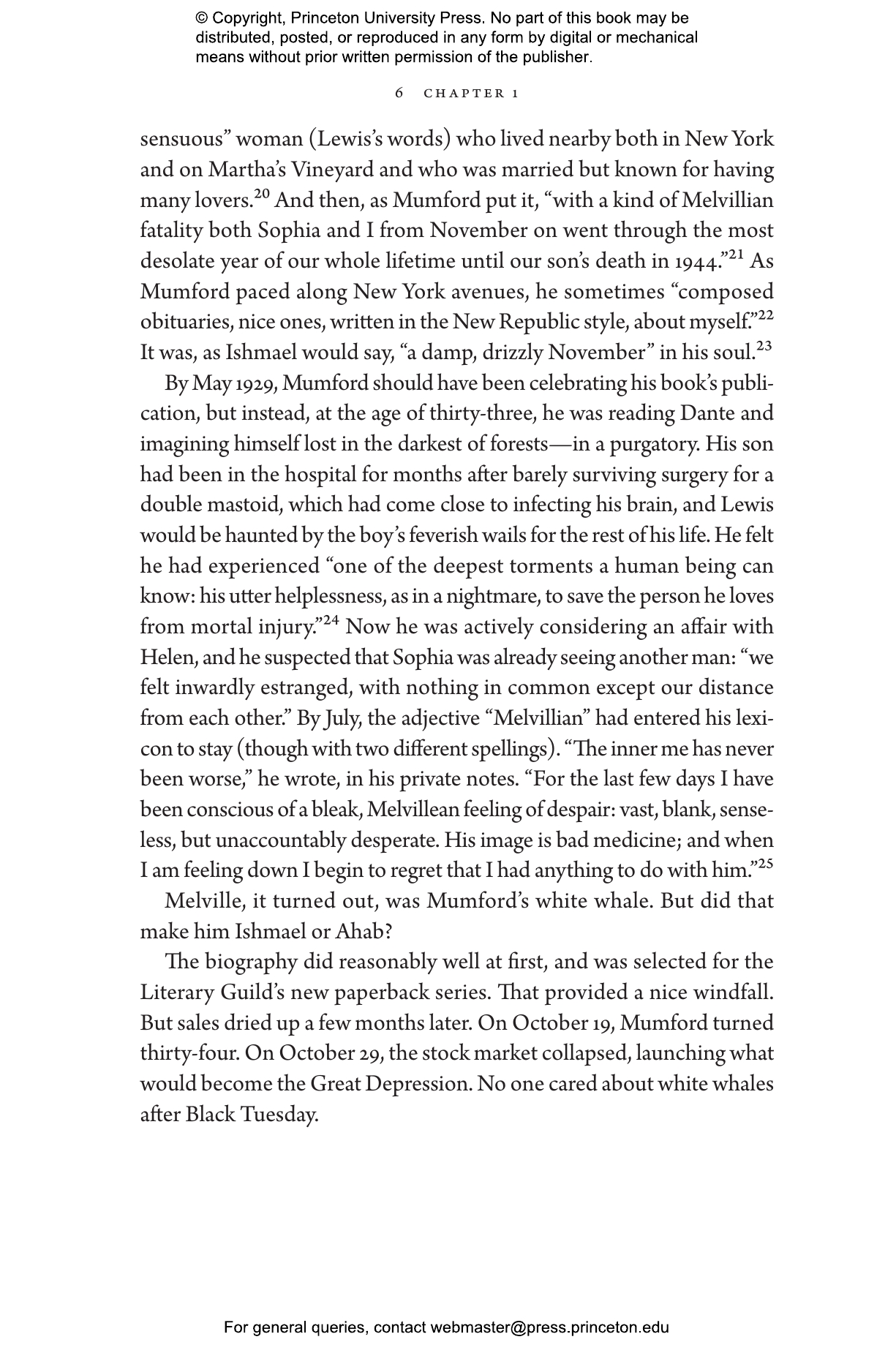 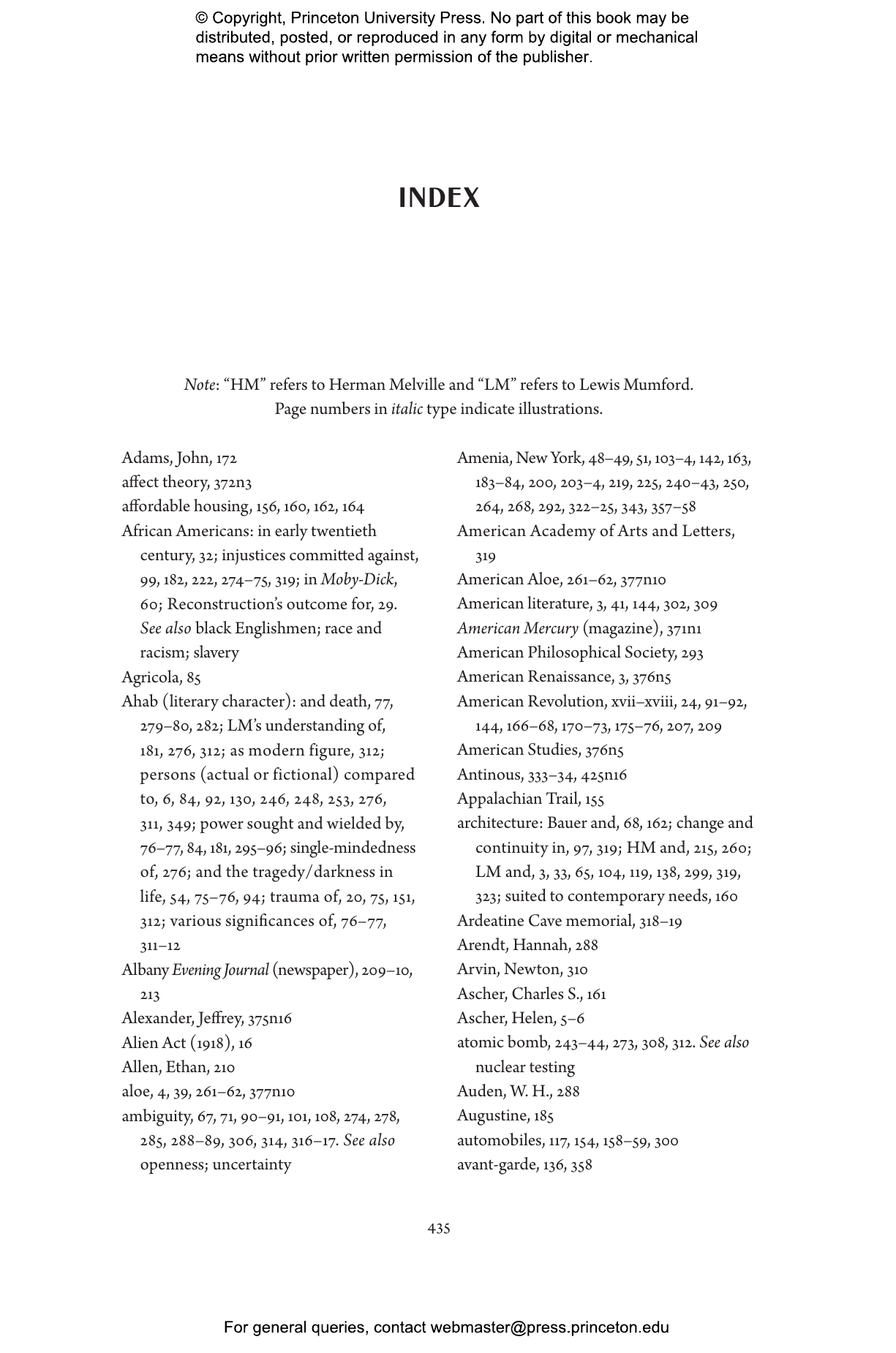 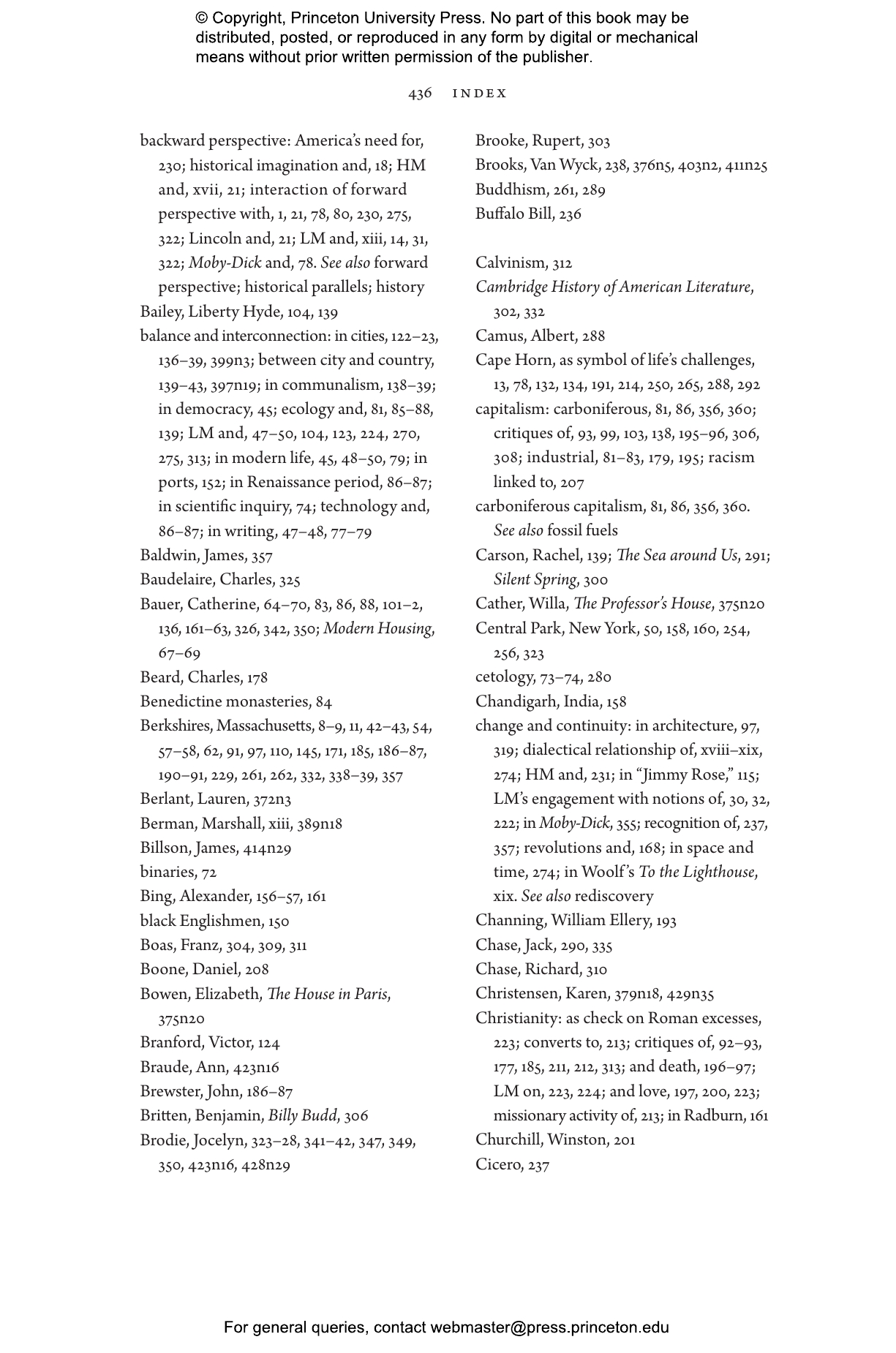 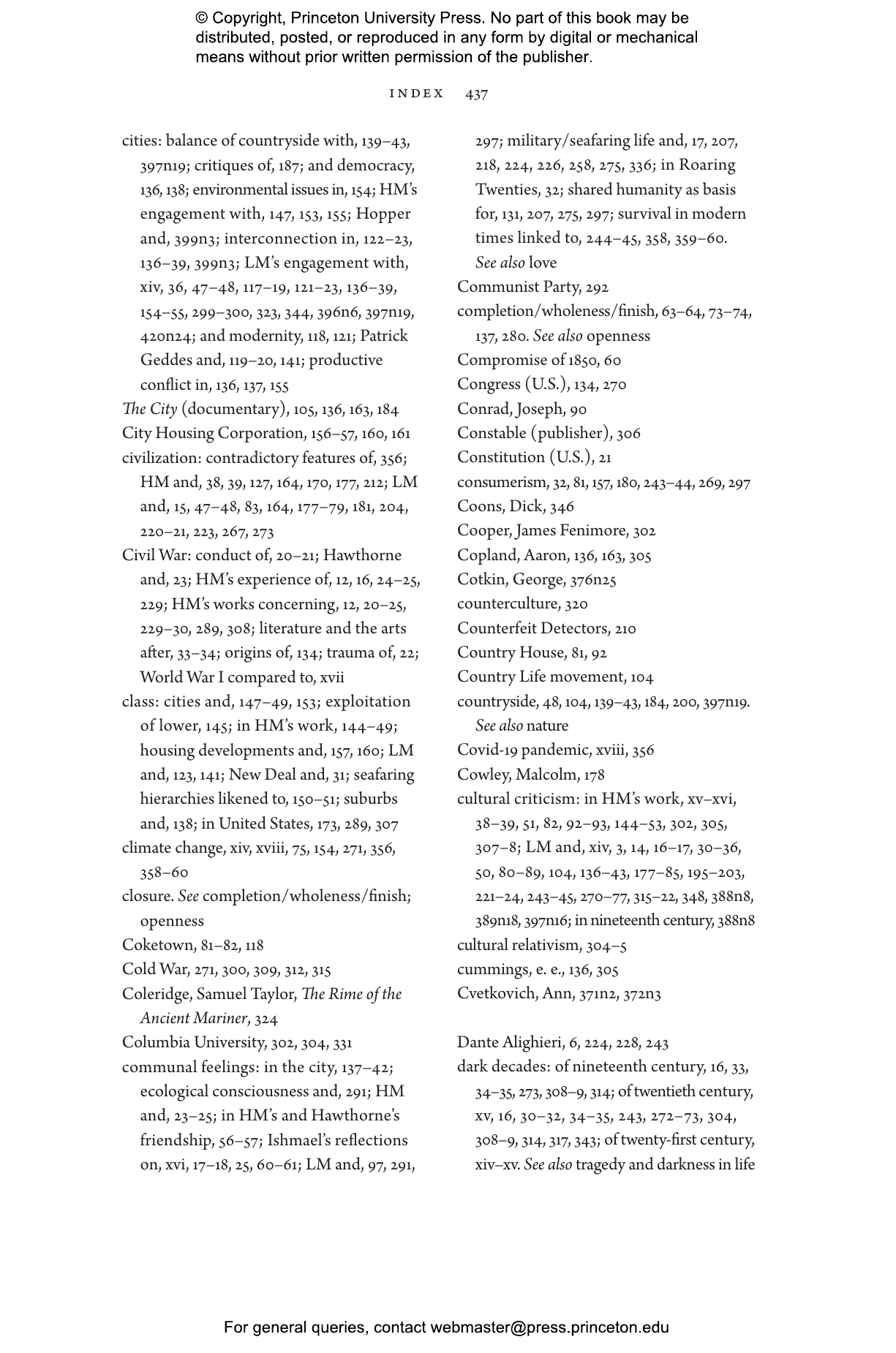 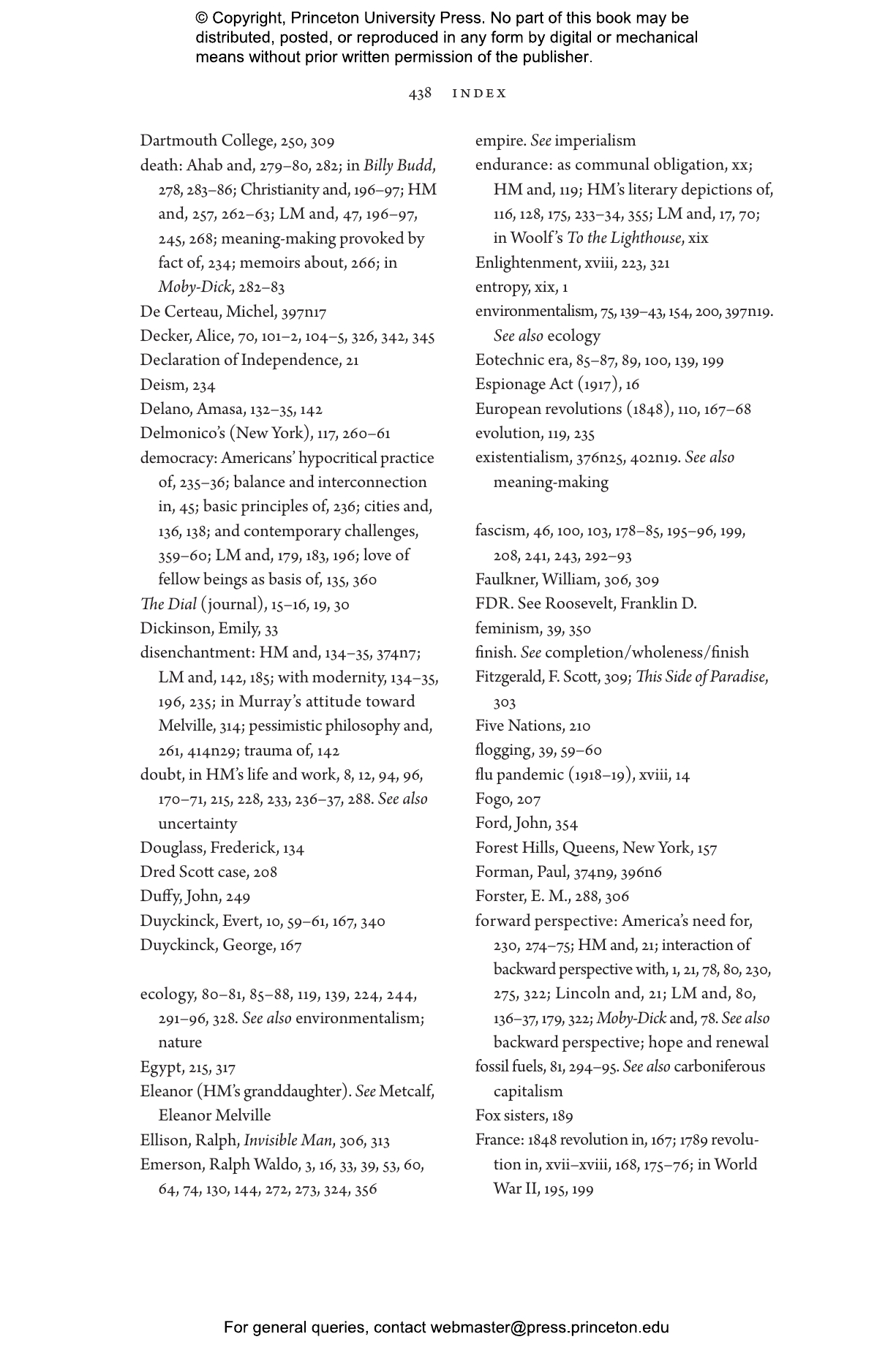 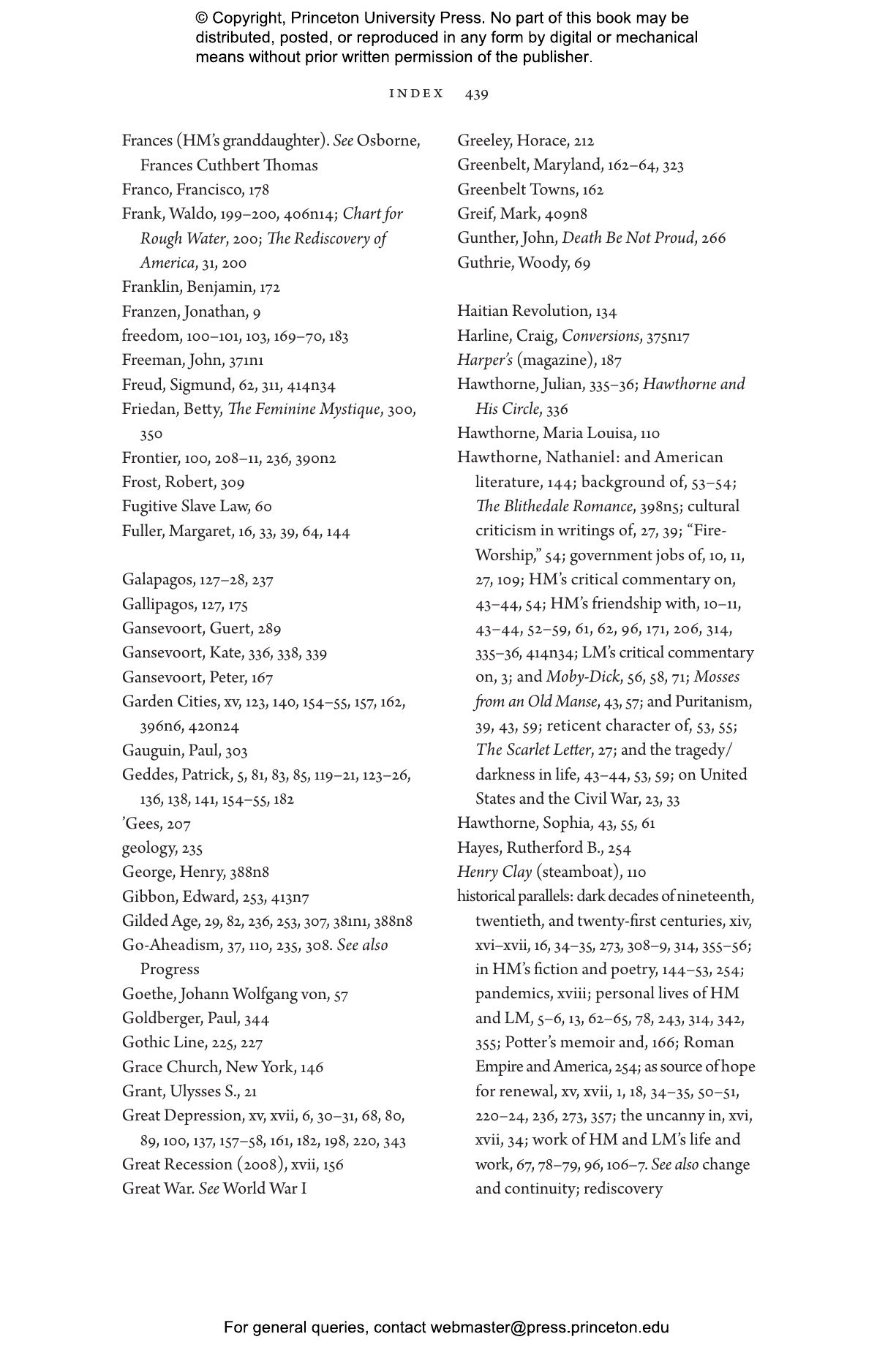 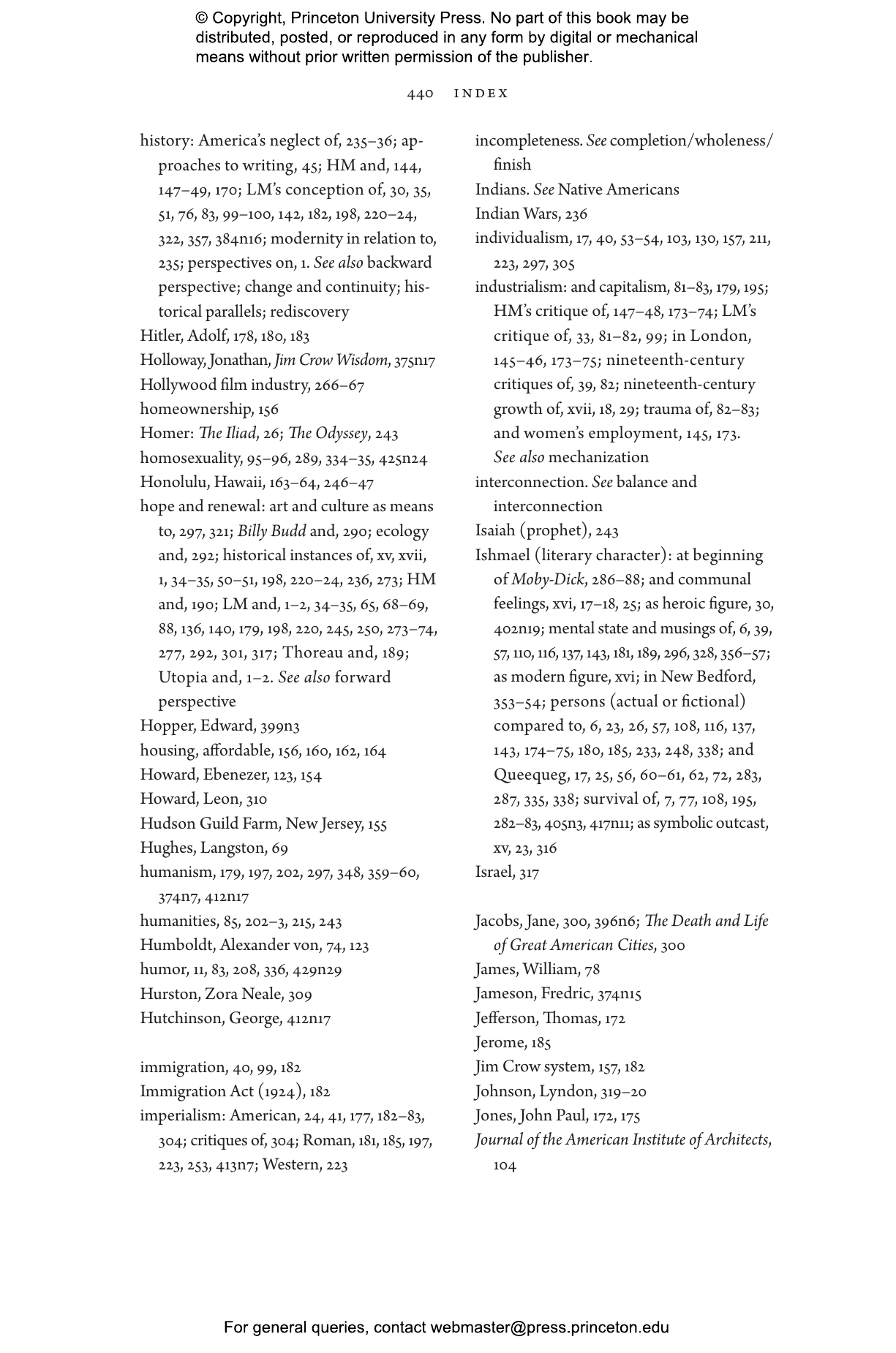 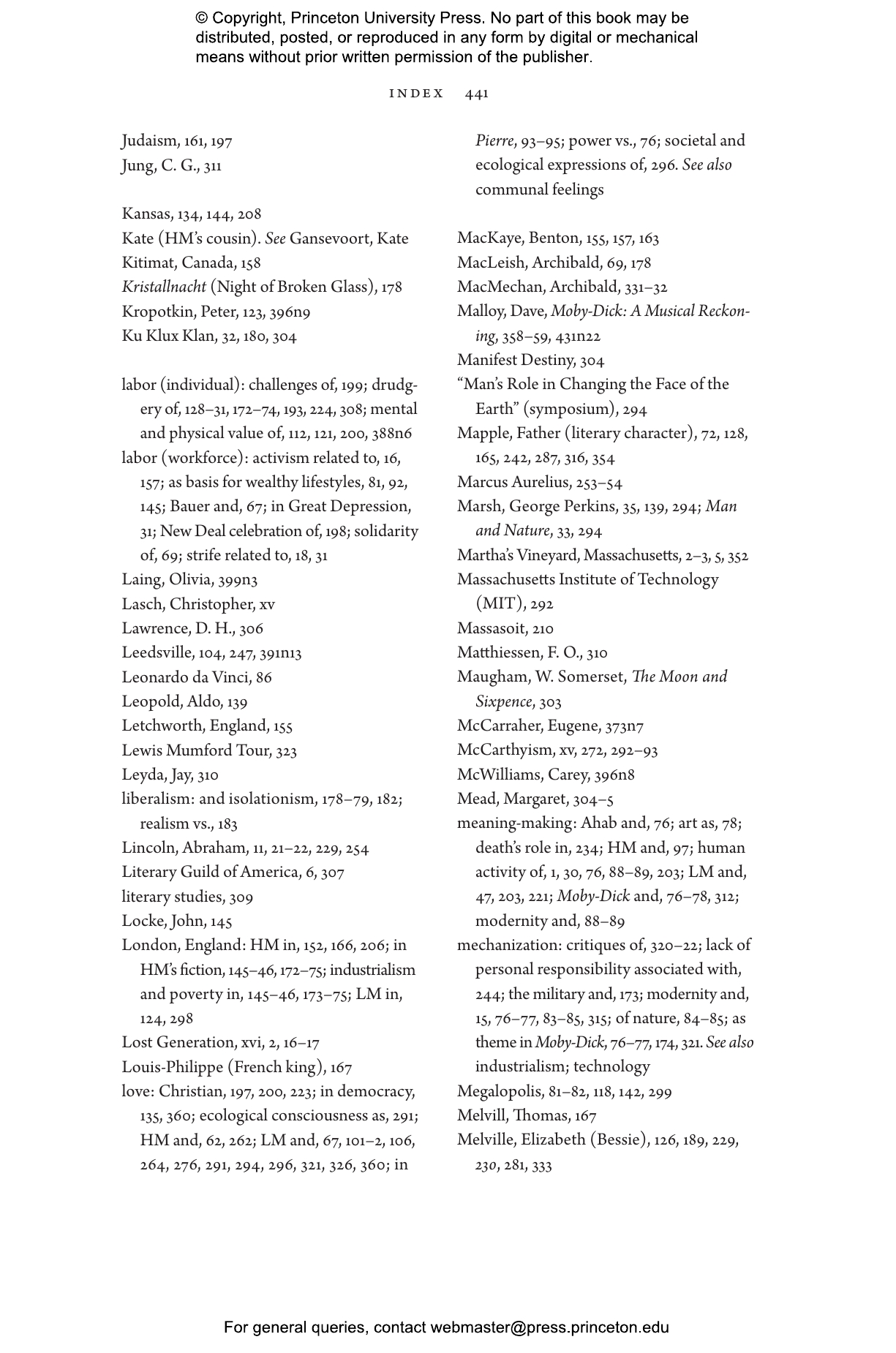 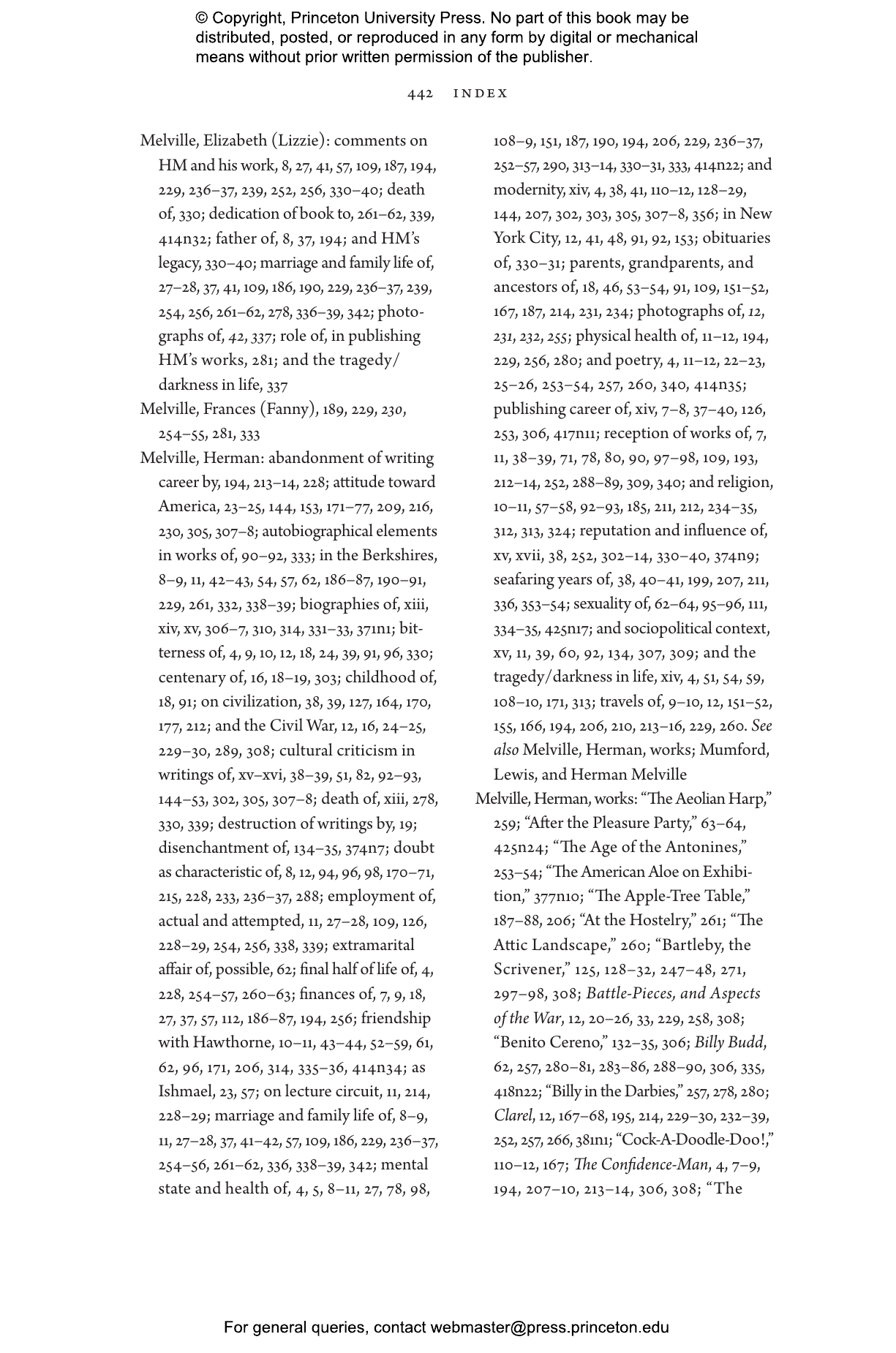 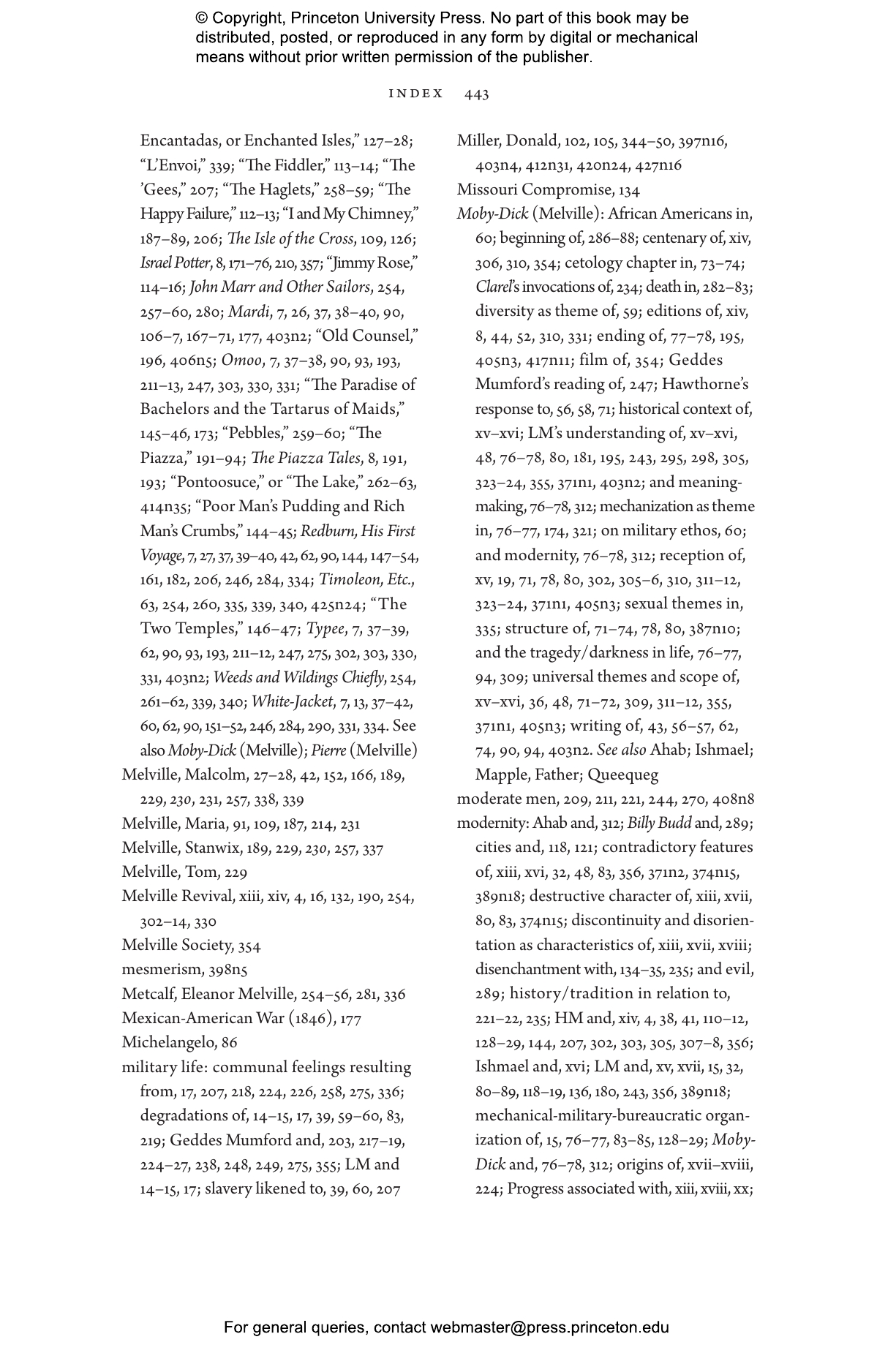 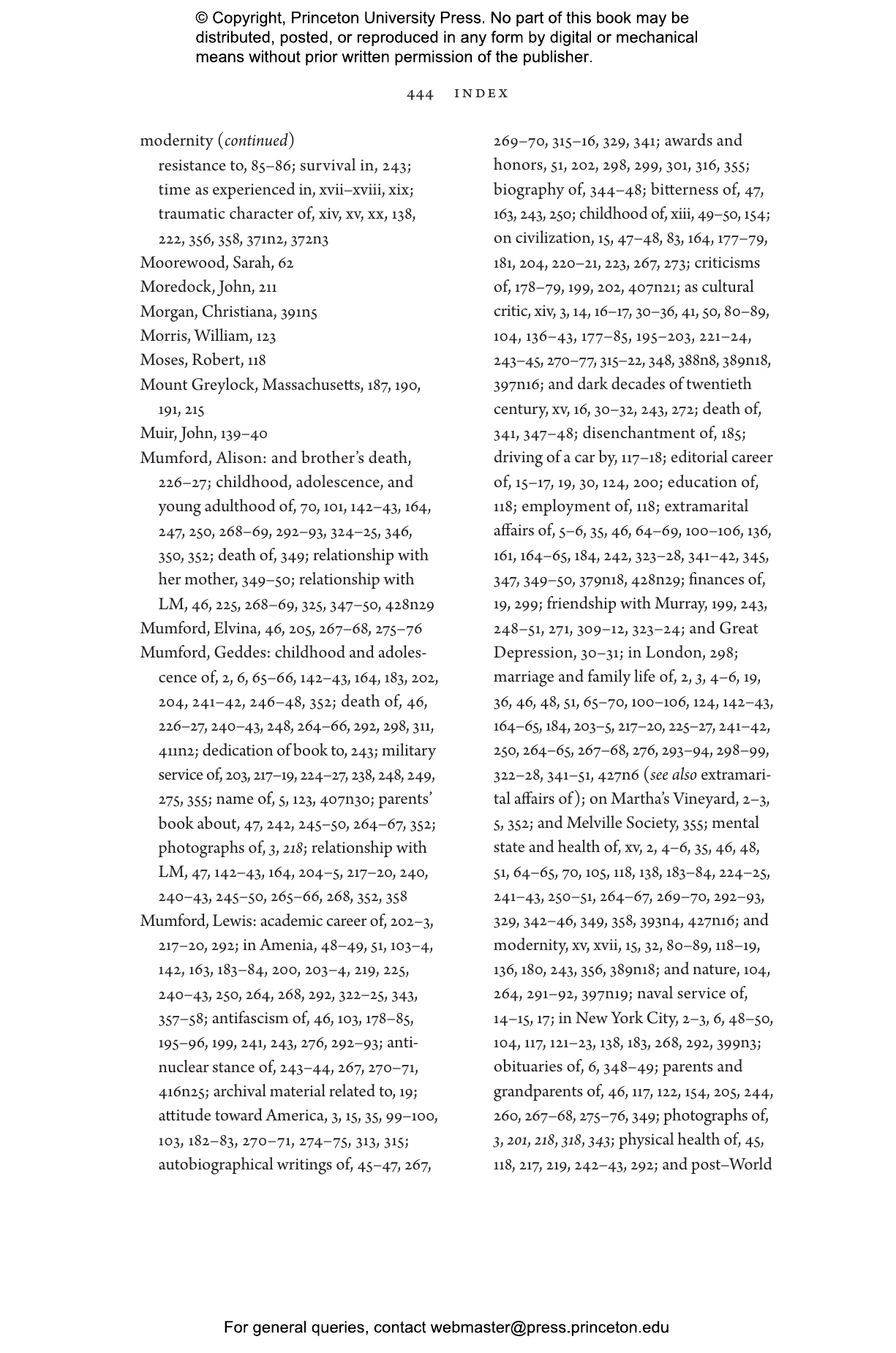 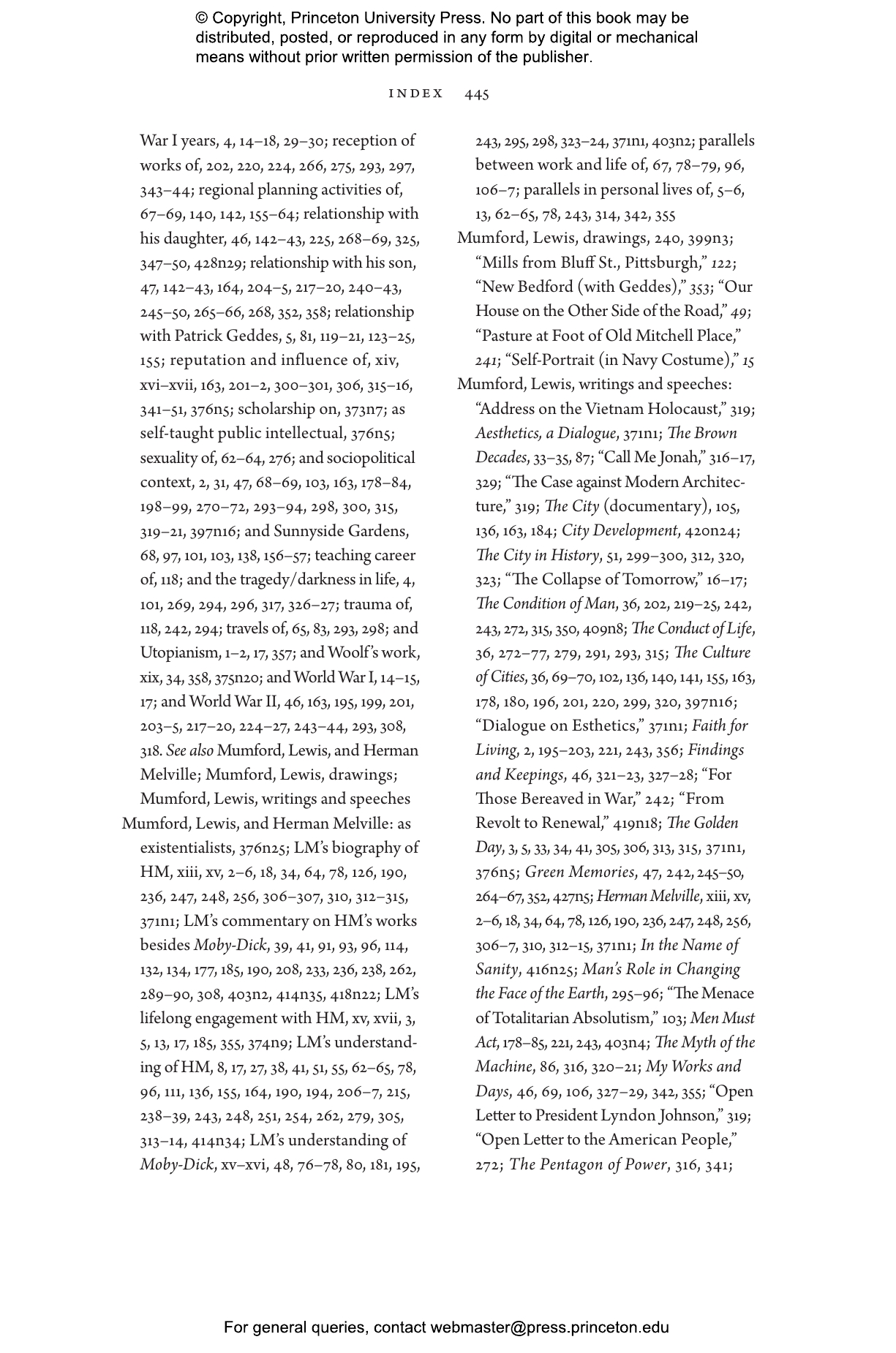 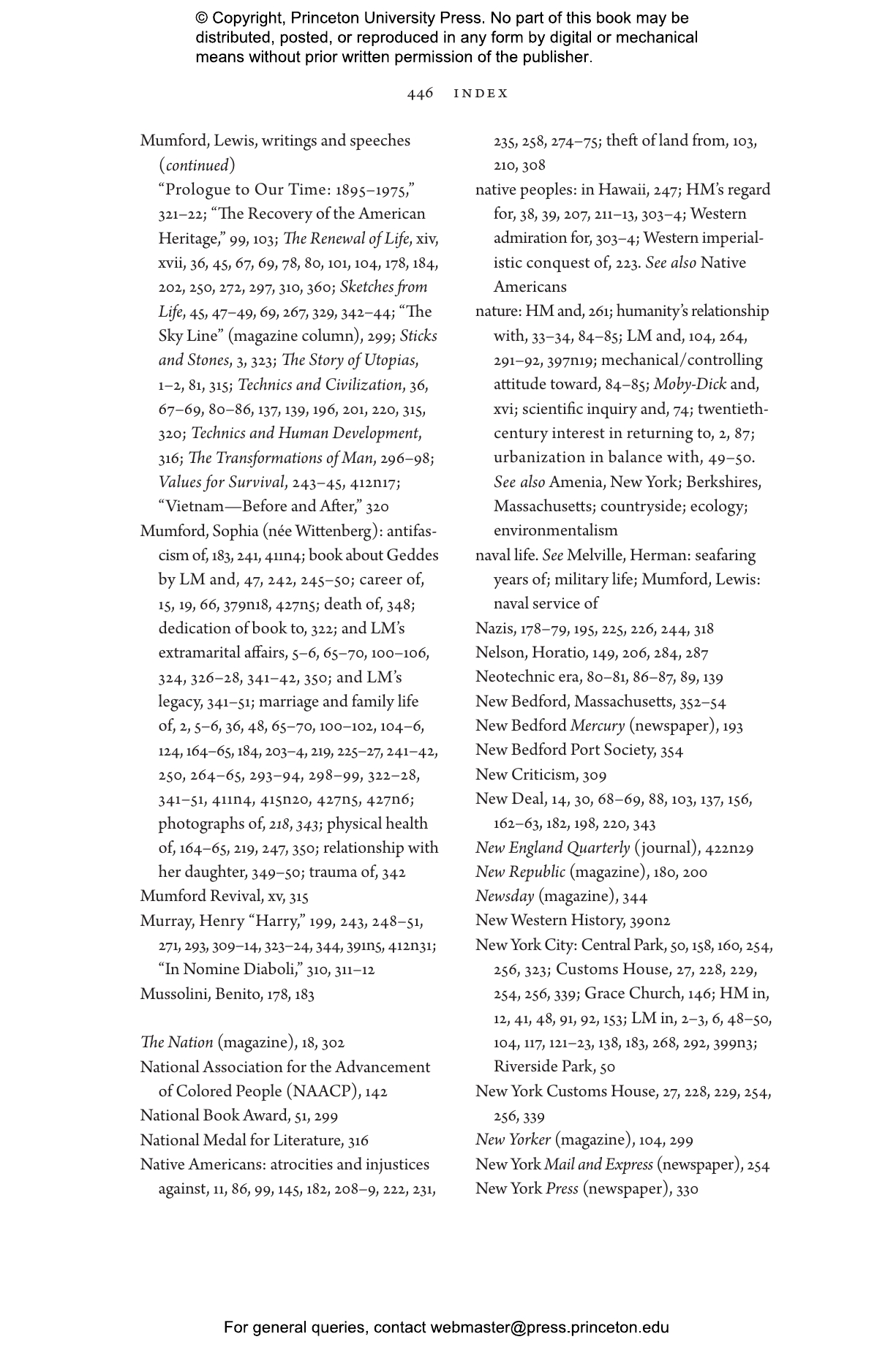 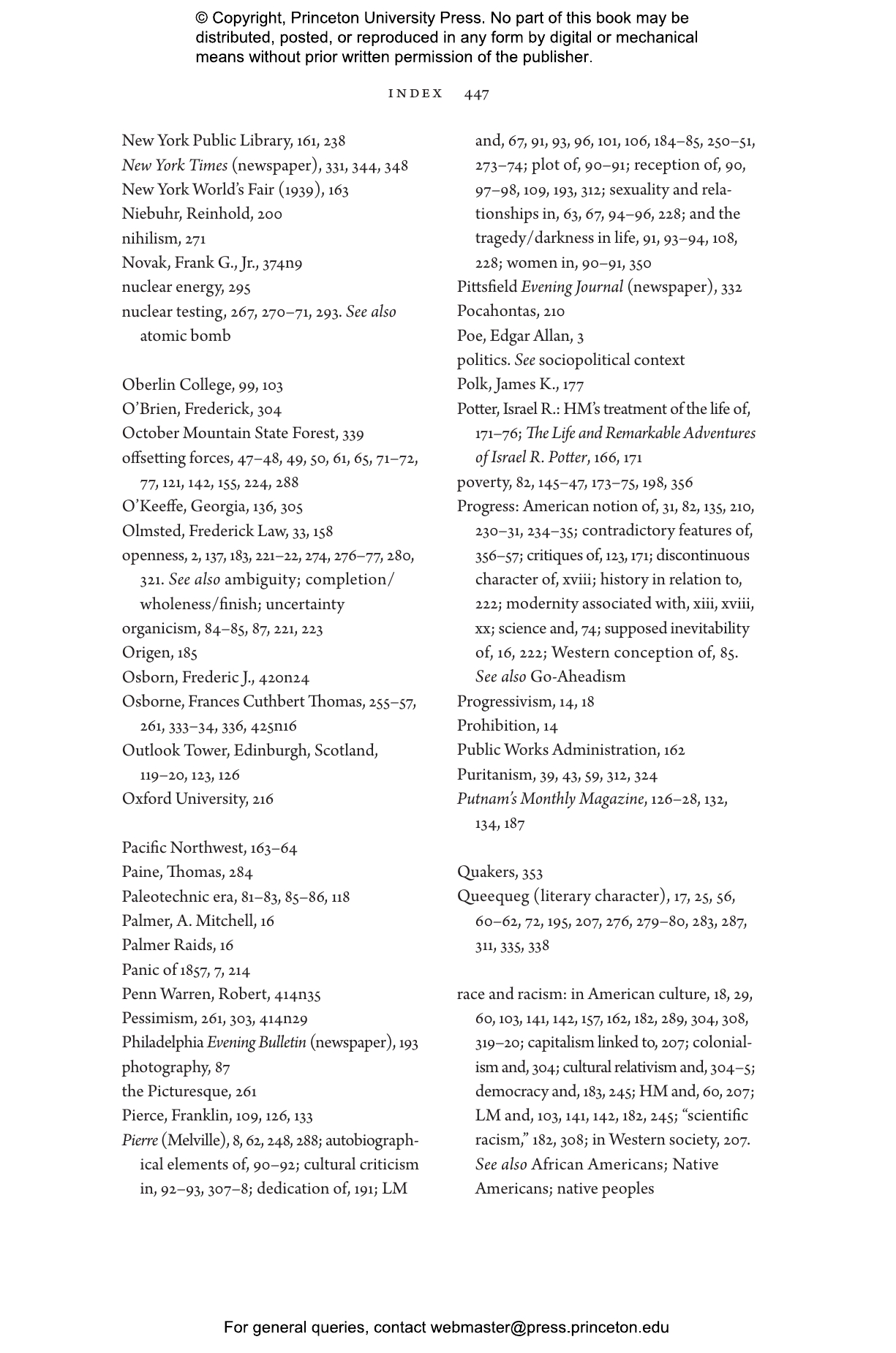 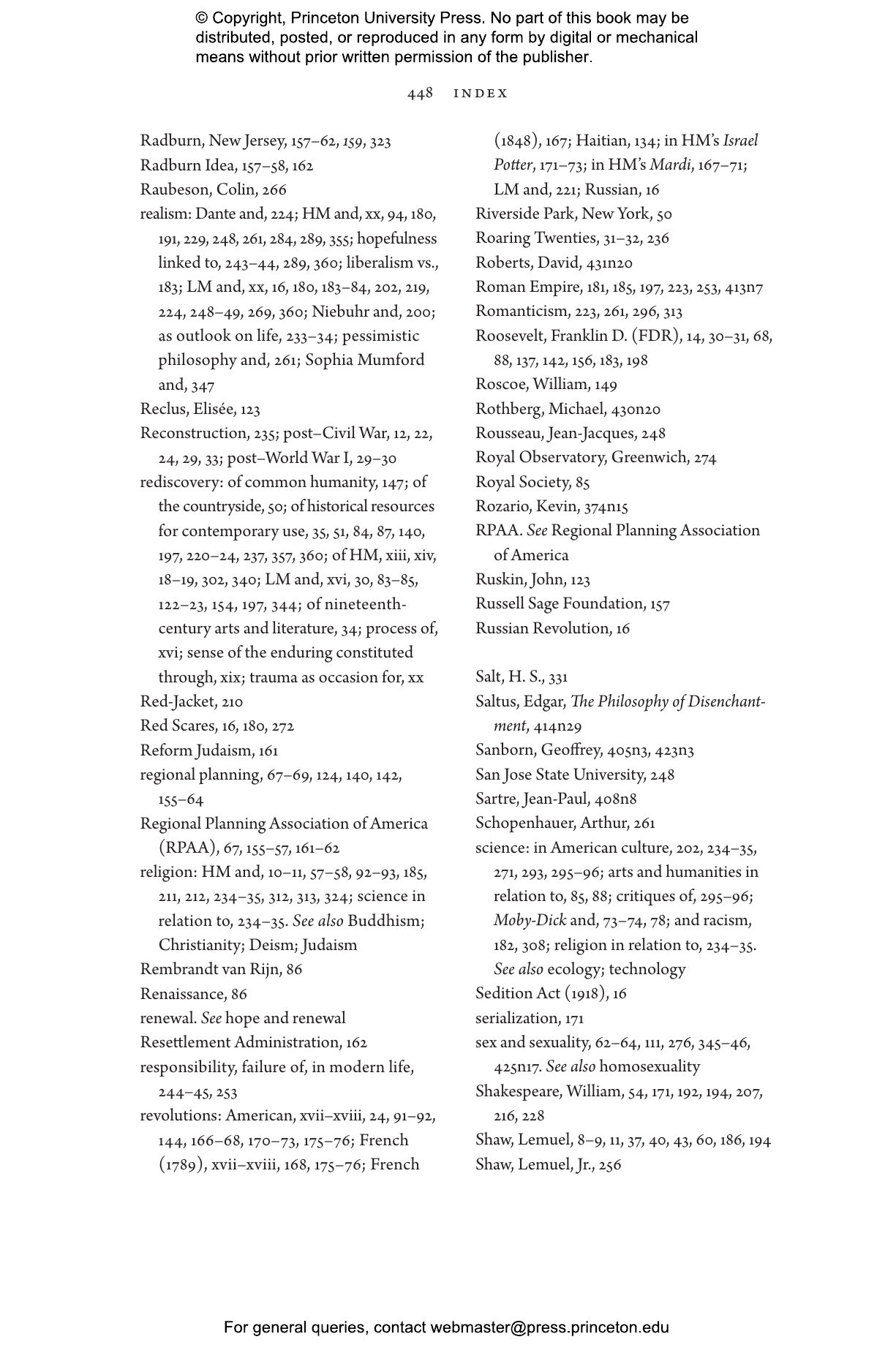 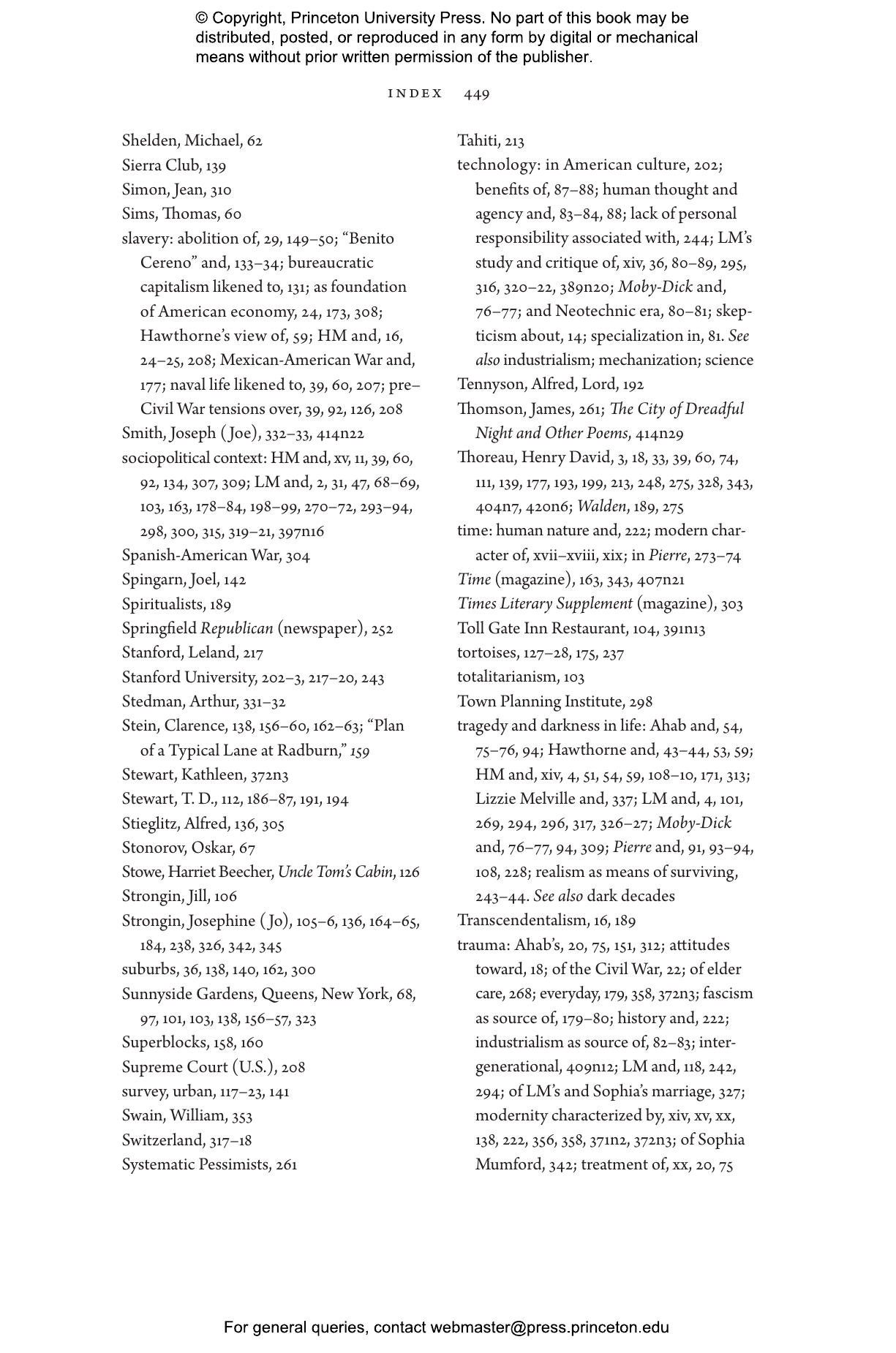 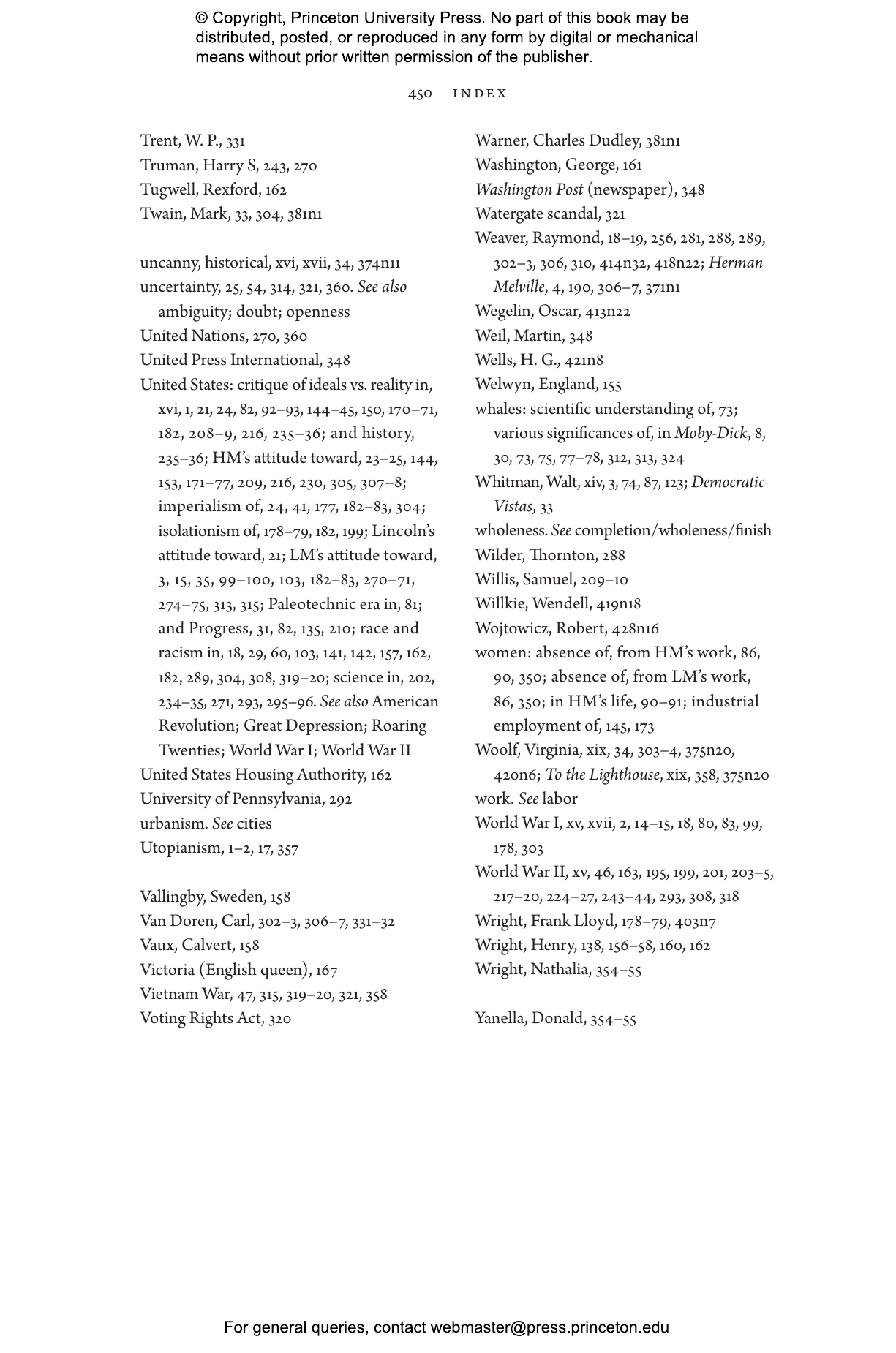 Finalist for the National Book Critics Circle Award in Biography 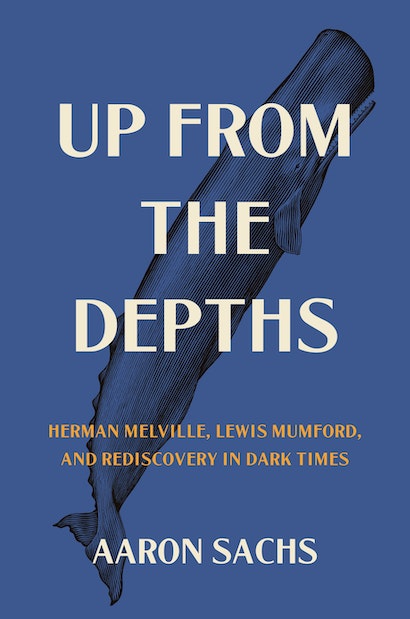 Up from the Depths tells the interconnected stories of two of the most important writers in American history—the novelist and poet Herman Melville (1819–1891) and one of his earliest biographers, the literary critic and historian Lewis Mumford (1895–1990). Deftly cutting back and forth between the writers, Aaron Sachs reveals the surprising resonances between their lives, work, and troubled times—and their uncanny relevance in our own age of crisis.

The author of Moby-Dick was largely forgotten for several decades after his death, but Mumford helped spearhead Melville’s revival in the aftermath of World War I and the 1918–1919 flu pandemic, when American culture needed a forebear with a suitably dark vision. As Mumford’s career took off and he wrote books responding to the machine age, urban decay, world war, and environmental degradation, it was looking back to Melville’s confrontation with crises such as industrialization, slavery, and the Civil War that helped Mumford to see his own era clearly. Mumford remained obsessed with Melville, ultimately helping to canonize him as America’s greatest tragedian. But largely forgotten today is one of Mumford’s key insights—that Melville’s darkness was balanced by an inspiring determination to endure.

Amid today’s foreboding over global warming, racism, technology, pandemics, and other crises, Melville and Mumford remind us that we’ve been in this struggle for a long time. To rediscover these writers today is to rediscover how history can offer hope in dark times. 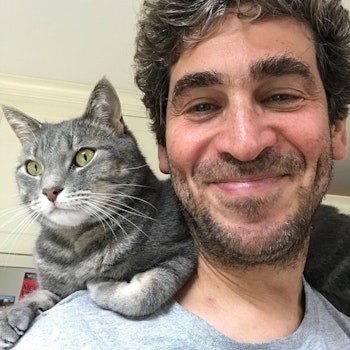 "Excellent. . . . A braided account of Melville and Mumford, aimed at exploring the strange resonance between their times and ours."—Daniel Immerwahr, Slate

"Sachs has written a sort of palimpsest of biography itself, showing how, generation by generation, we begin to see through the traffic between past and present that leads to the rediscovery of figures like Melville and Mumford, who wanted for themselves and their progeny (which includes us) a recognition that going backward can also be a way of going forward."—Carl Rollyson, New York Sun

"Sachs manages a set of impressive balancing acts: matching scholarly diligence with fluent, stylish prose; admiration for his subjects with an alertness to their flaws. Up from the Depths packs multiple books into one: an introduction to Mumford’s thought, an innovative study of Melville, and a history of the modern age through the eyes of two uniquely perceptive writers."—Madoc Cairns, The Observer

"An inspired study of [Melville and Mumford], juxtaposing their lives and works in alternating chapters. . . . What draws Sachs to [these writers] is the dialectic in each between continuity and disruption, confidence and despair."—Steven G. Kellman, American Scholar

"Fascinating. . . . In shining a light on Mumford’s efforts during the ‘Melville Revival’ of the mid-1900s, Sachs makes a strong case for the rediscovery of Mumford’s own writing. . . . A well-executed literary history."—Publishers Weekly

"This fascinating book explores the connection between two American writers, novelist Herman Melville (1819–91) and Lewis Mumford (1895–1990), the novelist’s biographer. In brief, lively, and engaging chapters, Sachs . . . alternates back and forth between the two men, detailing many correspondences in their lives and work despite the years that separated them. . . . Sachs provides sensitive analysis of text and context, offers a wealth of resources in his bibliography, and models how historians and critics can pose questions that continue to matter."—Choice

"Sachs’s ‘willingness to flash back and forth in time’ leaves readers with a subtle, poignant, understanding of the relationship between the past, present, and future. Sachs also offers his readers a tether for those who feel unmoored and alone as a result of modernity. By telling ‘the story of [these] two modern wanderers’ Sachs shows us the possibility of connection despite the years and the changing circumstances that separate [Melville and Mumford]."—Natalie Fuehrer Taylor, Law & Liberty

“Up from the Depths is a beautifully written, wise, and original book. Aaron Sachs’s account of Lewis Mumford’s decades-long engagement with Herman Melville’s work invites us to think anew about why we are drawn to certain forebears as our intellectual companions on life’s journey. The book is also a passionate plea that we confront our current ecological crisis with the same urgency Mumford and Melville brought to the modern terrors of their times.”—Casey Nelson Blake, coauthor of At the Center: American Thought and Culture in the Mid-Twentieth Century

“In this immensely thoughtful book, Aaron Sachs explores the shared uncertainty of Herman Melville and Lewis Mumford—two brilliant writers who were not always sure where to direct their energies in their uncertain times. But this is a book for our time and for anyone who is seeking direction by reflecting on the past.”—John Kaag, author of Sick Souls, Healthy Minds: How William James Can Save Your Life

"Aaron Sachs's intellectual biography of Melville and Mumford is an inspired work, both in conception and execution. Magnificently written, Up from the Depths will move readers with Sachs’s empathetic channeling of Melville's and Mumford's meditations on the nature and meaning of history."—Jennifer Ratner-Rosenhagen, author of The Ideas That Made America: A Brief History

“Sachs has done what the best intellectual and literary historians have done: provide us with the resources we need from past thinkers to face the future with hope, if not optimism.”—Robert Westbrook, author of Democratic Hope: Pragmatism and the Politics of Truth