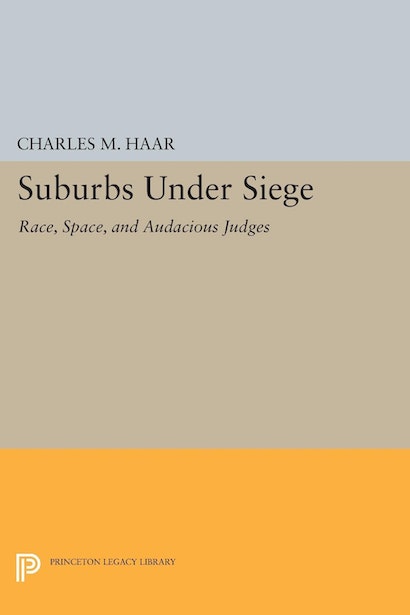 In Suburbs under Siege Charles Haar argues passionately that all people — rich or poor, black or white — have a constitutional right to live in the suburbs and that a socially responsible judiciary should vigorously uphold that right. For various reasons, American courts have generally failed to question local zoning regulations that trap the urban poor in the squalor of inner cities, away from decent housing and jobs in the suburbs. No U.S. Supreme Court case, for instance, has confronted exclusionary zoning rules, as Brown v. Board of Education once attacked school segregation. Instead, judges at all levels have most often reinforced the residential segregation that may well destroy American society. In this provocative book on the landmark Mount Laurel cases, Haar shows how the N.J. state judiciary broke out of this pattern of judicial behavior. These courageous, innovative judges attracted nationwide attention by challenging the forces of affluence that ruled the suburbs (and the legislature) of their state. Furthermore, they based their reasoning on the N.J. state constitution in order to protect their rulings from invalidation by the U.S. Supreme Court.

In the early 1970s, when the cases began, the plaintiffs, Ethel Lawrence and her daughter Thomasene, were barely making ends meet in the Philadelphia suburb of Mount Laurel, a town where their African-American ancestors had lived for seven generations. The Lawrences’ dream was to live in a Mount Laurel garden apartment planned by a grassroots reform group as affordable housing: in their way stood a typical minimum acreage zoning ordinance. The eventual court victory of the Lawrences and their young public interest attorneys inspired other N.J. suits and a process of remediation that continues to this day, as judges, experts (special masters), the state legislature, and other citizens work to carry out the Mount Laurel principles. Haar’s book is a bold attack on conventional doctrines of the separation of powers limitations on the judicial branch and a plea that judges across the country assume their proper responsibilities for fair housing before it is too late.

"Suburbs under Siege ... is both a worthy addition to the fair housing literature and a valuable study of a state supreme court."—Charles M. Lamb, The Law and Politics Book Review

"This book will be invaluable to everyone concerned about the future of civil rights and the fundamental principles of justice and opportunity for all in our modern society."—Edward M. Kennedy, U.S. Senate

"Charles Haar examines one of the greatest social issues of our day—the conflict between suburb and city.... A very important, wonderfully readable piece of work."—John Kenneth Galbraith, Harvard University

"This book is an extraordinary mix of academia—Haar's intellectual credentials are outstanding—and the real world."—Paul G. Garrity, Former Chief Judge of the Housing Court of the City of Boston and Retired Justice of the Massachusetts Supreme Court