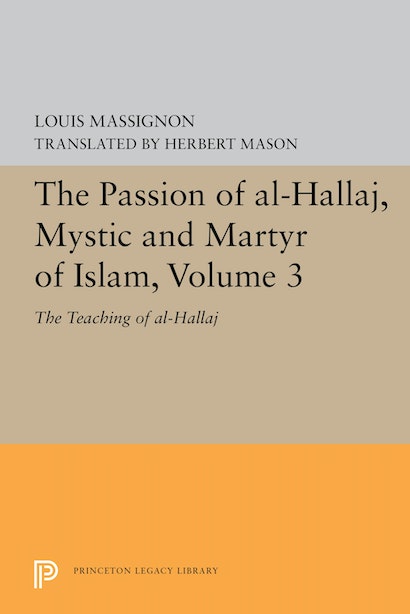 Volume 3 of 4. Encompassing the whole milieu of early Islamic civilization, this major work of Western orientalism explores the meaning of the life and teaching of the tenth-century mystic and martyr, al-Hallaj. With profound spiritual insight and transcultural sympathy, Massignon, an Islamicist and scholar of religion, penetrates Islamic mysticism in a way that was previously unknown.
Massignon traveled throughout the Middle East and western India to gather and authenticate al-Hallaj’s surviving writings and the recorded facts. After assembling the extant verses and prose works of al-Hallaj and the accounts of his life and death, Massignon published La Passion d’al-Hallaj in 1922. At his death in 1962, he left behind a greatly expanded version, published as the second French edition (1975). It is edited and translated here from the French and the Arabic sources by Massignon’s friend and pupil, Herbert Mason.
Volume 1 gives an account of al-Hallaj’s life and describes the wo rld in which he lives; volume 2 traces his influence in Islam over the centuries; volume 3 studies Hallajian thought; volume 4 contains a full biography and index. Each volume contains Massignon’s copious notes and new translations of original Islamic documents.
Herbert Mason is University Professor of Religion and Islamic History at Boston University. He is also apoet and novelist; his version of the Gigamesh epic was a nominee for the National Book Award in 1971.
Bollingen Series XCVIII.