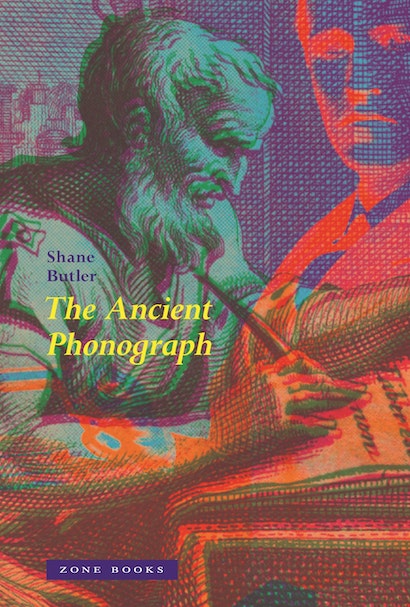 Long before the invention of the phonograph, the written word was unrivaled as a medium of the human voice. In The Ancient Phonograph, Shane Butler takes us back to an age, long before Edison, when writing itself was still relatively new. He meticulously reconstructs a series of Greek and Roman soundscapes ranging from Aristotle to Augustine.

Here the real voices of tragic actors, ambitious orators, and singing emperors blend with the imagined voices of lovesick nymphs, tormented heroes, and angry gods. The resonant world we encounter in ancient sources is at first unfamiliar, populated by texts that speak and sing, often with no clear difference between the two. But Butler discovers a commonality that invites a deeper understanding of why voices mattered then, and why they have mattered since.

With later examples that range from Petrarch to Puccini, Mozart to Jimi Hendrix, Butler offers an ambitious attempt to rethink the voice — as an anatomical presence, a conceptual category, and a source of pleasure and wonder. He carefully and critically assesses the strengths and limits of recent theoretical approaches to the voice by Adriana Cavarero and Mladen Dolar and makes a rich and provocative range of ancient material available for the first time to students and scholars in voice studies, sound studies, and media theory. The Ancient Phonograph will appeal not only to classicists but to anyone interested in the verbal arts — literature, oratory, song — and the nature of aesthetic experience.

"An indispensable theoretical companion to the performance practice which is the (re)composition of sensory history."—The Classical Review

"...its object is both as mesmerizing and as difficult to embrace as a bodiless echo."—Classical Philology

“A brilliant tour de force. The Ancient Phonograph defamiliarizes contemporary assumptions not just about the voice but about the very mainsprings of meaning and interpretation. What do we ‘hear’ when we read a text? Butler’s answer is complex, but it includes both more and less than what writing purports to represent. This irresolvable differential is what generates the materiality of language — namely, that which seductively compels us to read and to reread, to listen to our texts, and to enjoy them in their endless polyvocality. The texts of ancient Greece and Rome have survived, we can now appreciate, because they are the records of a culture that was neither oral nor literate but was exquisitely aural. Butler is a superb guide to this vocal literary culture, and to our own. His ear is pitch-perfect.” — James I. Porter, Chancellor’s Professor, University of California, Berkeley

“Shane Butler’s The Ancient Phonograph is that rare academic work that is delightful to read. Putting his scholarship at the service of a series of critical readings of classical texts he knows exceptionally well, Butler has brought into focus a crucial argument about the importance of ‘voice’ in classical literature — while also offering readers unfamiliar with that corpus an introduction to some of the field’s ‘greatest hits.’ Butler’s book should find an audience beyond scholars of classics, among those working in critical theory, textual studies, media studies, and the emerging field of media archaeology.” — Johanna Drucker, Breslauer Professor of Bibliographical Studies, University of California, Los Angeles

“The Ancient Phonograph is a highly original, ambitious, and deftly realized book. Taking on some of the most established and widespread post-structuralist concepts of the voice, language, presence, and the real, Butler advances a new theory about literature as a ‘phonograph,’ in the literal (Greek) sense of a writing of the voice. The book’s feat is to revitalize a range of contemporary conversations across the theoretical humanities by coaxing voices from ancient texts that have long been seen as the necessarily abbreviated scripts of once-vibrant, now lost performance cultures and far from relevant to media studies, primarily fixated on the modern and the postmodern. Butler pulls it off beautifully. The Ancient Phonograph maps exciting new ground for thinking about a text’s embodied resonances.” — Brooke A. Holmes, Professor of Classics, Princeton University