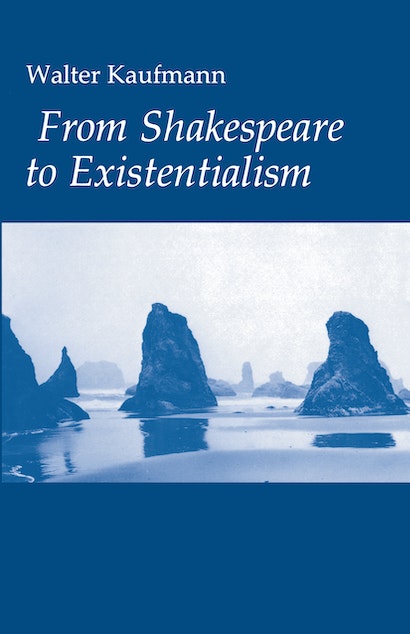 First published in 1959, From Shakespeare to Existentialism offers Walter Kaufmann’s critical interpretations of some of the greatest minds in Western philosophy, religion, and literature. Few scholars can match Kaufmann’s range of interests, from intellectual history and comparative religion to psychology, art, and architecture. In this illuminating and wide-ranging book, he traces the evolving Aristotelian ideal of the great-souled individual, showing how it was forgotten by medieval Christendom but recovered by Shakespeare and apotheosized by Nietzsche. An invaluable companion to his Critique of Religion and Philosophy, this volume presents Kaufmann at his most trailblazing, charting new directions in Western thought while providing bold perspectives on figures such as Goethe, Hegel, Rilke, and Freud.

“A bracing piece of work. It blows like a cold wind through the airless corridors and cobwebs of much present philosophy.”—George Steiner, The Economist

“Kaufmann is a first-rate literary critic, and his fresh insights into Shakespeare, Goethe, Nietzsche, and Freud can deepen the insights of every discriminating student of literature.”—Llewellyn Jones, The Humanist

“A very pugnacious book, and none the worse for that. Mr. Kaufmann has a vigorous mind and many things to say which we do not often hear.”—Philip Toynbee, The Observer

“[From Shakespeare to Existentialism] frequently enlightens, sometimes exasperates, but it never soothes one to rest with the comfortable assertion that all points of view can be reconciled without our deciding among them. In demanding that we choose and that the choice be a responsible one, Kaufmann is existentialist in the most important sense.”—Hazel Barnes, Chicago Review