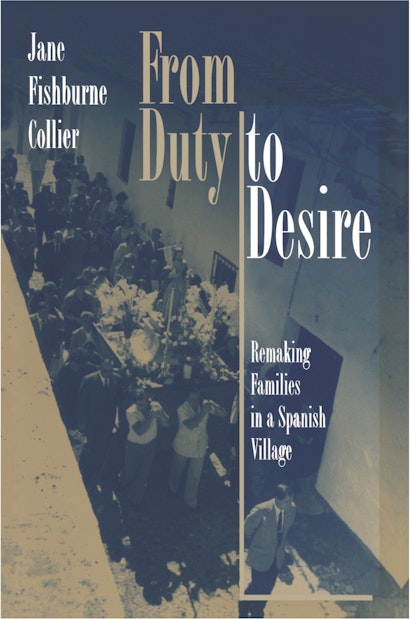 In the 1980s, Jane Collier revisited a village in Andalusia, where she and others had conducted fieldwork twenty years earlier, to investigate changes in family relationships and to explore the larger question of the development of a “modern subjectivity” among the people. Whereas the villagers she met in the sixties stressed the importance of meeting social obligations, the people she interviewed more recently emphasized the need to think for oneself: status concerns in choosing a spouse had apparently been replaced by romantic love, patriarchal authority by partnership marriages, parental demands for obedience by hopes of earning children’s affection, mourners’ respect for the dead by personal expressions of grief. In each of these areas, the author detected a modern concern for “producing oneself,” which emerged with changes in how villagers experienced social inequality.


Collier notes that when inheritance appeared to determine social status, villagers protected family reputations and properties by demonstrating concern for “what others might say.” Once villagers began participating in the national job market, where individual achievement appeared to determine a worker’s income, they focused on realizing their inner abilities and productive capacities. Sensitivity to one’s feelings, thoughts, and aptitudes, along with “rational” assessments of the costs and benefits entailed in “choosing” how to use them, testified to a person’s unceasing efforts to realize inner potentials. The author also traces shifts in the meaning of “tradition,” suggesting that although “modern” people cannot “be” traditional, they must have traditions in order to produce themselves.

Jane Fishburne Collier is Professor of Anthropology at Stanford University. She is the author of Law and Social Change in Zinacantan and Marriage and Inequality in Classless Societies.

"Collier has written a sensitive and subtle description of the development of a 'modern subjectivity' among people born in a small, rural town in southern Spain. . . . From Duty to Desire is well-written, compelling, theoretically sophisticated, didactic, clear, and yet complex. Ethnographically it is generally very fertile."—Journal of Social History