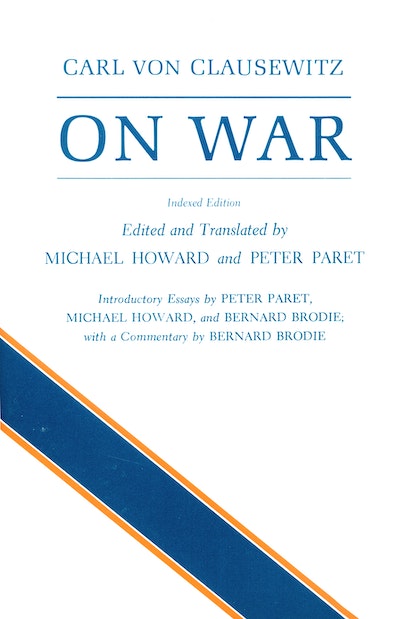 Carl von Clausewitz’s On War is the most significant attempt in Western history to understand war, both in its internal dynamics and as an instrument of policy. Since the work’s first appearance in 1832, it has been read throughout the world, and has stimulated generations of soldiers, political leaders, and intellectuals. First published in 1976 and revised in 1984, Michael Howard and Peter Paret’s Princeton edition of Clausewitz’s classic work has itself achieved classic status and is widely regarded as the best translation and standard edition of On War in English. This feature-rich edition includes an essay by Paret on the genesis of Clausewitz’s book, an essay by Howard on Clausewitz’s influence, and an essay by Bernard Brodie on the continuing relevance of On War. In addition, Brodie provides a lengthy and detailed commentary on and guide to reading On War, and the edition also includes a comprehensive index.

Peter Paret is professor emeritus at the Institute for Advanced Study in Princeton. His many books include Clausewitz in His Time, The Cognitive Challenge of War (Princeton), and Clausewitz and the State (Princeton). He is a recipient of the Pritzker Literary Award for lifetime achievement in military writing. Michael Howard (1922–2019) was a leading British military historian who held professorships at the University of Oxford and Yale University. His many books included The Franco-Prussian War and War in European History. Bernard Brodie (1910–1978), who wrote widely on military and nuclear strategy, was professor of political science at the University of California, Los Angeles.

"Undoubtedly one of the most useful books ever written."—The New Republic

“On War is undoubtedly one of the most useful books ever written. . . . Now that we have the new publication from Princeton, translated with elegant clarity by Michael Howard and Peter Paret, all excuses for not reading Clausewitz are removed.”—New Republic

“[A] smooth, readable, accurate, and handsomely printed translation into contemporary English. . . . It should remain the standard English translation for a long time.”—Armed Forces and Society