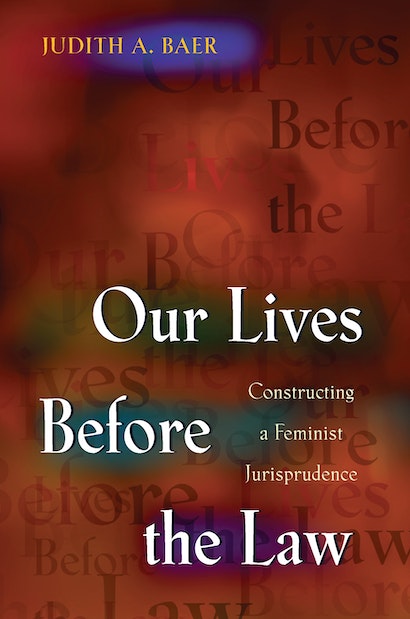 According to Judith Baer, feminist legal scholarship today does not effectively address the harsh realities of women’s lives. Feminists have marginalized themselves, she argues, by withdrawing from mainstream intellectual discourse. In Our Lives Before the Law, Baer thus presents the framework for a new feminist jurisprudence — one that would return feminism to relevance by connecting it in fresh and creative ways with liberalism.


Baer starts from the traditional feminist premise that the legal system has a male bias and must do more to help women combat violence and overcome political, economic, and social disadvantages. She argues, however, that feminist scholarship has over-corrected for this bias. By emphasizing the ways in which the system fails women, feminists have lost sight of how it can be used to promote women’s interests and have made it easy for conventional scholars to ignore legitimate feminist concerns. In particular, feminists have wrongly linked the genuine flaws of conventional legal theory to its basis in liberalism, arguing that liberalism focuses too heavily on individual freedom and not enough on individual responsibility. In fact, Baer contends, liberalism rests on a presumption of personal responsibility and can be used as a powerful intellectual foundation for holding men and male institutions more accountable for their actions.


The traditional feminist approach, Baer writes, has led to endless debates about such abstract matters as character differences between men and women, and has failed to deal sufficiently with concrete problems with the legal system. She thus constructs a new feminist interpretation of three central components of conventional theory — equality, rights, and responsibility — through analysis of such pressing legal issues as constitutional interpretation, reproductive choice, and fetal protection. Baer concludes by presenting the outline of what she calls “feminist post-liberalism”: an approach to jurisprudence that not only values individual freedoms but also recognizes our responsibility for addressing individuals’ needs, however different those may be for men and women.


Powerfully and passionately written, Our Lives Before the Law will have a major impact on the future course of feminist legal scholarship.

Judith A. Baer is Professor of Political Science at Texas A&M University. She is the author of several books, including Women and the Law. Her academic honors include a fellowship at the Woodrow Wilson International Center for Scholars and a year as a Fulbright Senior Lecturer in Turkey.

"In her latest, well-written, cogently argued book, Baer unflinchingly criticizes feminist legal scholars for being too nice. . . . Taking particular care to unravel the faulty reasoning of those feminist theorists who legitimize gender differences, Baer's ultimate goal is to provide the groundwork for a vital feminist postliberalism."—Choice

"This book displays a deep and subtle understanding of law, its possibilities and limits."—Christine A. Littleton, University of California, Los Angeles

"A comprehensive and impressive work in feminist jurisprudence. It will become a must read for scholars in law and for those in political science and women's studies for whom law is a subject of interest."—Austin Sarat, Amherst College